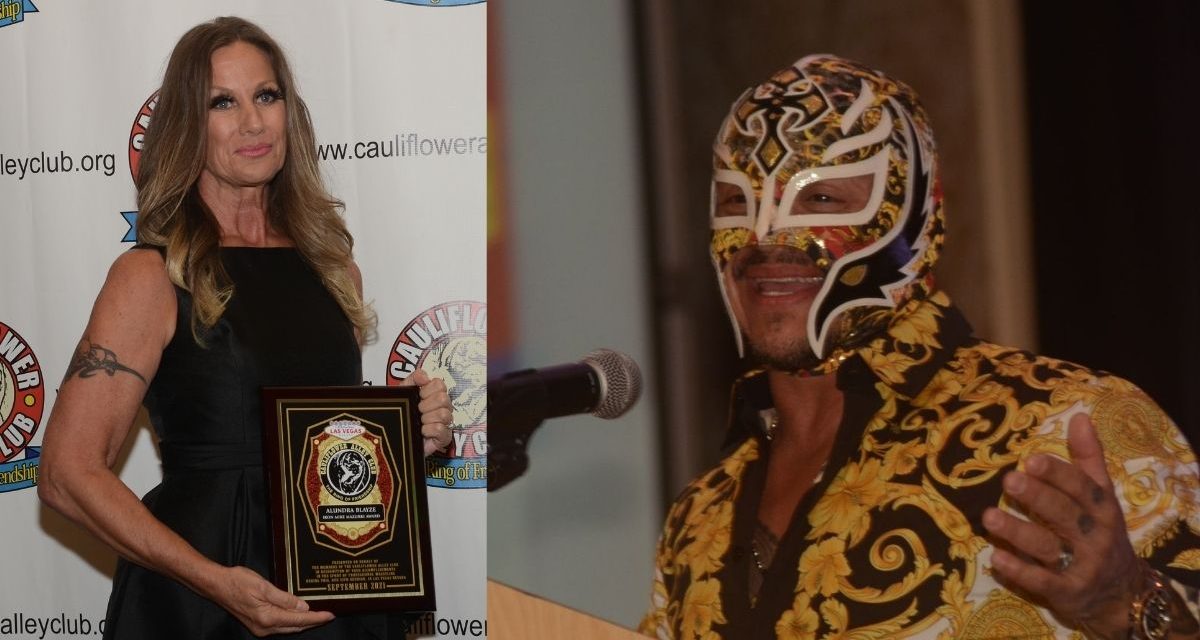 LAS VEGAS — Among the goals of the Cauliflower Alley Club is ensuring that those wrestlers of years past are recognized for their talent and their work in the squared circle in the present, whilst preserving their legacy for the future. Many of those honored Wednesday night at the Gold Coast Hotel & Casino at the annual banquet were trailblazers that laid forth a new path for other to follow.  Chief among them was the newest recipient of the “Iron” Mike Mazurki Award: Alundra Blayze a.k.a. Madusa.

Her husband, Alan Jonason, was selected by Madusa to introduce her to those in attendance. “I’m not so sure that was a good idea, Babe,” he joked. Though he’s been married to Debra Miceli for ten years, and knew a specialized language from 30 years in the Army, Jonason relayed that he has learned a different language revolving around “babyfaces”, “heels”, and “gimmicks.” He recalled coming to CAC for the first time and hearing the stories and decades of advice from those wrestlers of the past, and he felt like he was family. “I gladly became a lifetime member of this family,” Jonason replied before singing the accolades of his wife as being recognized in more than one field: a wife, stepmom, entrepreneur, and athlete. He also pointed out that she is the first and only woman to win freestyle Monster Jam and the second woman to be honored with the award before bringing her up for her speech as the audience stood to applaud her; the last of many standing ovations during the evening. “There’s a lot to follow here tonight,” said Madusa, “and I want to give to everyone here in the room [a] thank you.”

“I don’t have the traditional cauliflower ear,” she said, “[but] I do have an ear for the business.” She choked up when told a story about seeing CAC president and CEO, Brian Blair and Paul Orndorff, and she was crushed to hear of Orndorff’s recent passing. “Because of that,” she explained, “I wanted to be a lifetime member. It’s is so important to promote the CAC, and what it can offer.” As someone whose storied career to wrestling Bull Nakano to working in AWA, WWF and WCW in the 1980s and ’90s, it made Madusa more than a survivor, it helped her thrive.  “Intuition has guided me,” said Madusa. That intuition parlayed to many other endeavors, from a master dog trainer, to a yoga teacher, to monster truck racing.  “I’m also happy to report,” Madusa announced “that I have signed with ECW Press to publish my biography.”  Madusa is the second woman to be honored with the Iron Mike Award, the first being Trish Stratus in 2016.

Another big name in the field of wrestling, or rather lucha libre, honored at CAC was Rey Mysterio, Jr. Sam Adonis was Mysterio’s presenter, and he told of how his dad would tell bedtime stories of wrestler on house and among those stories was of Mil Mascaras. That was all the young Adonis knew of luchadors, up until 1994 when lucha libre was imported to America for ECW.  “But one of those men,” said Adonis “rose above the rest and captive the world was Rey Mysterio.” Adonis not only honored the masked luchador as an ambassador of lucha libre, but he said, “Rey Mysterio is a symbol of hard work; he is a symbol of the American Dream.”

“I am truly blessed,” said Mysterio as he thanked the fans and his peers at CAC and to God for his success. Retelling his journey by starting to train under his uncle, Rey Mysterio, Sr. at eight years old, and then having his first match at 14 years old in a local church in Mexico. That passion for the sport of professional wrestling continues on, as Mysterio noted he is a second generation wrestler. Now, he wants to continue that tradition with his son, Dominik. “The ones that paved the road,” said Mysterio, “and those coming up like my son… the best advice I gave him was, ‘Keep your feet on the ground. Stay humble.’”

John Arezzi had the honor, once again, of hosting second night of the CAC, and it was a return to camaraderie and many members that were in attendance, while remembering those that passed away, recently, to many reasons, but mostly to COVID.

Before the banquet started, Arezzi wanted to acknowledged David Cantu and Charlie Smith, both longtime members of the CAC and currently the oldest at 91 years old, each.  This was a resounding theme of the night, and the reason that the CAC continues its work, to ensure those who have laid the groundwork of what today’s wrestling landscape resembles in its current fashion

Starting the night with the Men’s Wrestling Award to Ricky Santana, who was recently featured in a story. He was brought up by Fidel David Sierra (The Cuban Assassin), and he noted among Santana accomplishments that he also was the first Latino to be a road agent in WWE and work in creative for WCW.  “I talk to Ricky every single day,” said Sierra “because the future is not promised.” 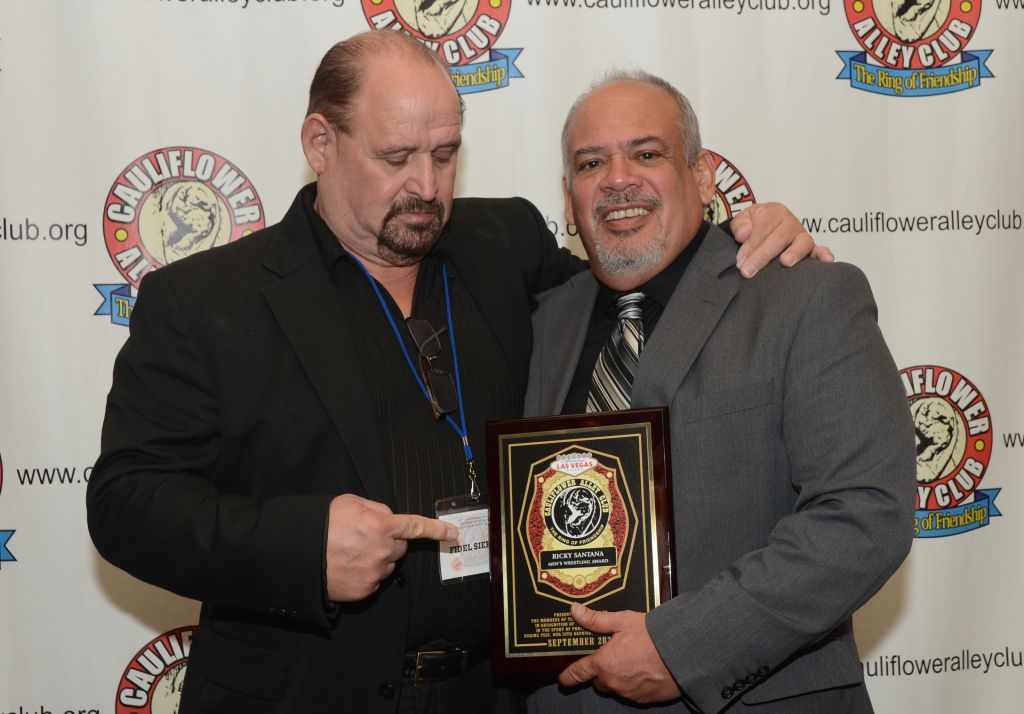 Presenter Fidel David Sierra (The Cuban Assassin) with the recipient of the 2021 Men’s Award, Ricky Santana, at the CAC Banquet at the Gold Coast Hotel and Casino. Photo by Brad McFarlin.

Santana was also humbled by the award.  “I want to thank God for giving me the gift,” said Santana, “because none of this would be possible.”  He also used the opportunity to lay a few rumors to rest, chief among them that he was related to musician Carlos Santana (Spoiler Alert:  He’s not).  Santana also noted another correction, in that he was trained by Boris Malenko, not his son Dean, but he took that time to thank the wrestling families like the aforementioned Malenkos and the Funks for helping shape the worker he became.

Next up was the James C. Melby Historian Award to honor SlamWrestling Producer Greg Oliver.  Presented by his friend, Pam Morrison (who is the daughter of Four Horseman manager, J.J. Dillon, also in attendance), she described Oliver as a man who was dedicated to the meaning and preserving the history of professional wrestling.  “Oliver is always curious,” she stated.  “For him, it’s about the ‘why’ and the ‘so what’ that drives him.”

As Oliver took to the podium, he thanked the CAC, for allowing him to examine the narrative. “My job is to find the truth,” explained Oliver. Oliver talked about showing to the spotlight in the sport and to keep that history alive.  This was clearly illustrated when he announced that recently Natasha the Hatchet Girl passed away, to surprised gasps from those in attendance. Oliver noted that Natasha was here less than three years ago, when he explained the importance that someone needs to document and tell their history.

Next was the Tag Team Award, accepted by manager “Precious” Paul Ellering posthumously for The Road Warriors, Hawk and Animal. During the video tribute, Ellering looked on at his former tag team mates before taking to the podium to a standing ovation. Ellering thanked the CAC for this opportunity. “[Hawk and Animal] woulda loved this” Ellering said, “and we owe CAC a debt of honor for the road they paved for all of us and paving the road for the next generation.” He spoke not only of his years wrestling in places like the AWA, but transitioning to managing after a knee injury sidelined him, to managing and being a part of The Road Warriors championship run. “It is good that warrior like us meet in the struggle of life,” Ellering said quietly, before ending with Hawk’s infamous catchphrase, “What a rush.”

Brian Blair took the opportunity to note Tuesday night’s winners of the Courage Award, Stuart Kemp and Jim Valley, before playing a video tribute to another winner of the Courage Award, “The Golden Boy” Jerry Grey, who is stricken with colon and liver cancer. Blair emphasized that the work of the CAC was to offer assistance when their fellow brothers and sisters of the squared circle were in their hour of need.

The Lou Thesz Award was presented, via video recording, by Dory Funk, Jr. “To receive the honor,” Funk said, “you need skill, strength and be a fan favorite. Rob Van Dam has it all.” 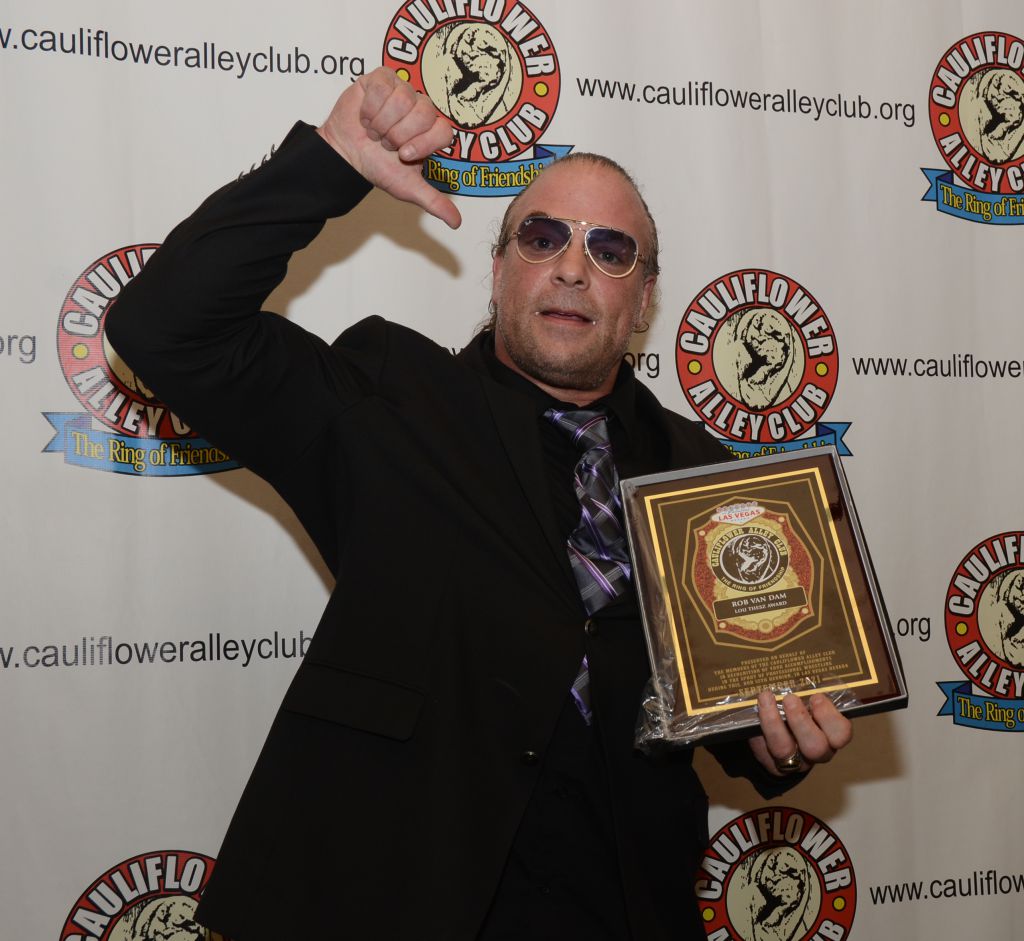 Rob Van Dam, recipient of the 2021 Lou Thesz Award at the CAC Banquet at the Gold Coast Hotel and Casino. Photo by Brad McFarlin.

“Being honored by my peers is so cool,” Van Dam noted, “because it always seemed like I was fighting uphill with the placeholders.”  But in typical Van Dam fashion, he didn’t worry about the negatives. “When your life goes by so quick,” he rationalized, “you don’t notice because you’re busy living your life.” Van Dam told the crowd lots of tales of his trailblazing wrestling life, his career…his cannabis use (which is another form of trailblazing, if you will), while plugging his cannabis business, and that it could help those wrestlers with their depression rather than turn to “the wrestler’s cocktail” of pills and drink. He also revealed he did a documentary on his stand-up comedy and his recent health concerns with his double vision and CTE. Van Dam proudly announced that his documentary was now on Amazon and he also sold to the streaming channel, Reelz. “I also want to thank,” Van Dam said, “my spiritual life and my soon-to-be recognized wife, Katie Forbes.”