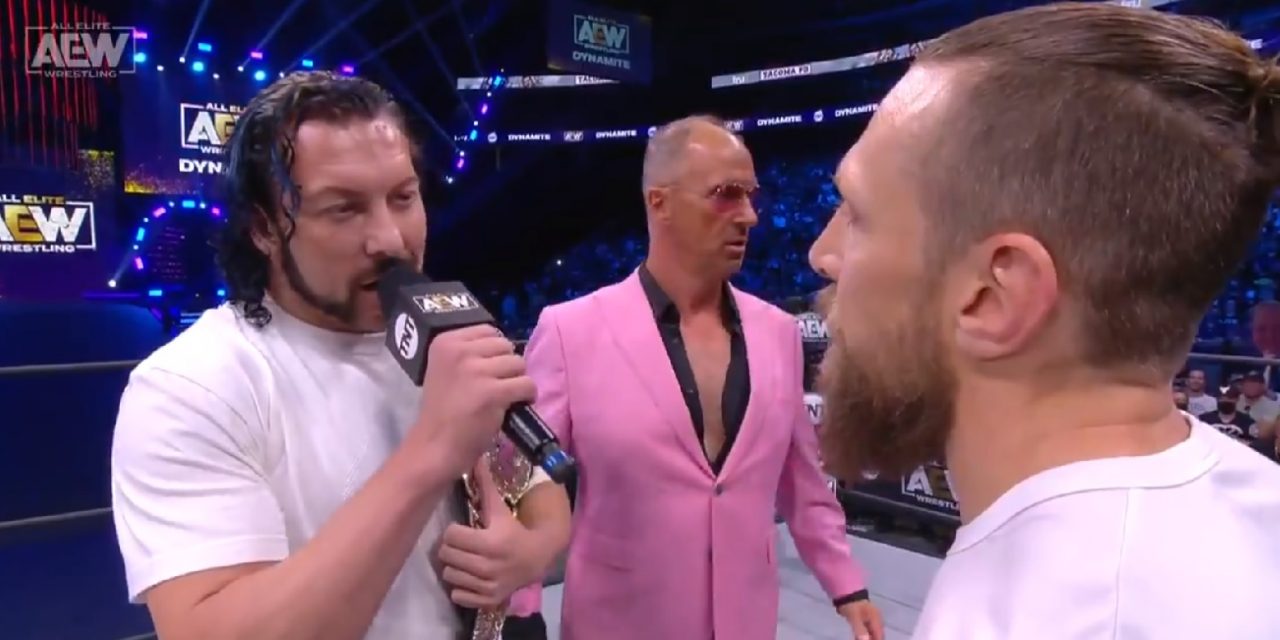 Hey, I was away for a week, did I miss anything? Bryan Danielson starting something with Kenny Omega, you say? I can dig it. Wait, Minoru Suzuki? OK, now you’ve got my complete attention. Or I should say, TNT has my attention, as CM Punk joins the announcers to call the action from the Prudential Center in Newark.

Despite his awesome current gimmick, Kazarian has been doing most of his Elite hunting by running down and attacking members of the group ringside and after matches, and not as much during matches. This is a fun way to get Cole into action on Dynamite, for sure. Punk discusses how Cole’s nerves might be in his in-ring AEW debut but correctly points out that Adam hasn’t been out of wrestling for seven years, nor is he performing in front of his hometown fans (bay bay). It takes a few tries, but Cole hits the Panama Sunrise and the Last Shot to get the W.

After his win, Cole says hope is a dangerous thing, and the locker room hoping it can keep up with The Elite is silly. Cole says three guys have already gotten under his skin in his short time in AEW: Christian Cage, Luchasaurus and Jungle Boy. He challenges the trio to a six-man tag next week on Rampage, with the Young Bucks as his partners. Sounds good to me.

The Lucha Bros. have the gold, but there are plenty of challengers for it, including The Butcher and The Blade, who get their shot on Friday at Rampage.

Fuego Del Sol has a new car, but he really wants to be TNT Champion. He’s willing to put his ride on the line for a shot at Miro, kind of like the wrestling equivalent of racing for pink slips. Punk quips that he’s going to have to teach the young kids about the downside of gambling.

Putting on a show with as many cliches as New Jersey means that running down the crowd is like shooting fish in a barrel for MJF. He gets even more heat by having an imaginary conversation with the late Brian Pillman about his son. Pillman Jr. appears wielding a chair, which is enough to chase off even Wardlow. Feel the power of the tiger. We then head backstage to see Jim Ross talking to Junior about taking on MJF at Arthur Ashe Stadium in Queens, and it’s nice to see AEW give him more promo time.

Are Jurassic Express and Cage going to accept Cole’s challenge? Yes, yes I do believe they are. Props to Christian for saying the Super Elite threw Cole a lifeline and rescued him from developmental. That’s a smart NXT diss.

Good to see Cash Wheeler is able to keep wrestling, as his hand injury was reported to be pretty severe. Martin has been fun to watch while his brother has been on the shelf, and pairing him with Sydal makes a lot of sense, stylistically speaking. He ends up a victim of the Big Rig in the end, as FTR grabs another victory.

Lance Archer mocks Jon Moxley for taking on Minoru Suzuki in his hometown, saying things will be different in New York. Back out in the arena, the lights go out for the atmospheric entrance of Malakai Black. He’s here to talk, not fight, claiming there’s an enemy in their midst: Rosario Dawson, who jumps in Black’s back when he is distracted by Cody Rhodes. Or maybe his bright red suit. Rhodes and Black brawl into the crowd and up the stairs. So many beers going to waste being used as weapons. Those are expensive arena beers, too.

The Bunny has some thoughts about Anna Jay, and they’re not complimentary ones. Sounds like she wants a fight against Jay on Rampage, and Anna doesn’t want the Dark Order

Back out in the ring, Dan Lambert has American Top Team and the Men of the Year backing him up so he can make fun of AEW and its fans … again. Someone’s got to answer him, and that someone is Chris Jericho, accompanied by Jake Hager, a man with some MMA knowledge of his own. Punk loves this segment, it’s pretty clear. Jericho makes up an entrance song for Lambert called “I’m a Fat-Faced Dips–t,” which proves pretty popular with the Newark fans. More verbal barbs are exchanged, leading up to a challenge for Queens. That was a really long-winded way to book a match, but an entertaining one.

Why did the Gunn Club turn heel? Billy says it was because the group has been doing nothing but winning matches but still getting disrespected.

This is an intriguing matchup because Cargill is undefeated and Hirsch has just one loss in AEW. Maybe some kind of weird finish? Ah, nope, Cargill lands a kick to the face and hits her finisher to remain perfect. She probably deserves a title shot soon.

Andrade El Idolo is upset with his assistant for intervening in his match with Pac, and insists he can beat Pac or anyone else whenever he wants.

Taz approaches the announce table to beef with Punk over “taking his job.” Hook steps to Punk, but it’s a setup so Powerhouse Hobbs can launch an ambush from behind. After Hook tells the announcers to clear out, Hobbs sends Punk through the table, except not really because it doesn’t break.

I missed one week of this show and Shawn Spears is feuding with Darby Allin?

Spears gives the early bird to Sting at ringside, and by that I mean a middle finger. Rude. Also, we learn that Allin has a necklace that he wears 24/7/365. In other words, all the time. Both men take some mean bumps in this one, but the Coffin Drop is one too many for Spears.

After the bell, FTR confront Allin and Sting, and Blanchard decides to hit Sting with a chair. That proves to be a bad move since he no-sells it, but the Icon then has to face FTR solo. Allin tries to make a rally, but as he’s just been through a match, he isn’t much help. FTR nails the spike piledriver on Sting, then holds him in place so Blanchard can wipe the face paint off him.

Bryan Danielson says he isn’t going after the Elite, just one member of the Elite. He’s here and he’s game, so let’s go, Omega. He’s got some live mic time too, but it’s quickly interrupted by Don Callis, who gets in a funny by calling the American Dragon “the hippie millionaire.” Heh. Danielson eventually cuts off Callis, telling Omega that while it may someday be about the title, right now it’s simply about who’s better. Let’s give the people what they want. Danielson came to fight the Best Bout Machine, the God of Professional wrestling, not a guy who hangs out with a bunch of goofy stooges and lets a piece of s–t talk for him. Has he lost his confidence, or a step? Or just his balls? That proves to be the insult that does it, because to Callis’ chagrin, Omega says if he wants the Best Bout Machine, the answer is ‘yes.’

Miro cuts another Redeemer promo, answering Fuego’s challenge with the car at stake. He doesn’t seem too interested in the car, frankly.

I’m going to give 2point0 some respect and spell their team name the way they apparently want it spelled. I have to say they’ve made a good first impression, with AEW booking them wonderfully since they arrived. The announcers put that idea over as well, noting that going after some of the promotion’s big dogs right off the bat has proven to be a shrewd move. Kingston makes an energetic hot tag before getting Mox back into the mix, and Jeff Parker ends up getting wrecked. Good stuff.

We’re not quite done here, as Suzuki’s music hits. and the man himself comes to the ring, still smarting over the so-called “Suzuki Incident” in Cincy. Archer pulls Kingston out of the ring, leaving Mox and Suzuki to handle things among themselves. We’ve got two separate melees now, and while Suzuki has plans to piledrive Moxley through a table, Jon escapes and the fight keeps going. In fact, it appears we’re going to fade to black before the refs can get it under control. See you in seven — next time from a tennis stadium! 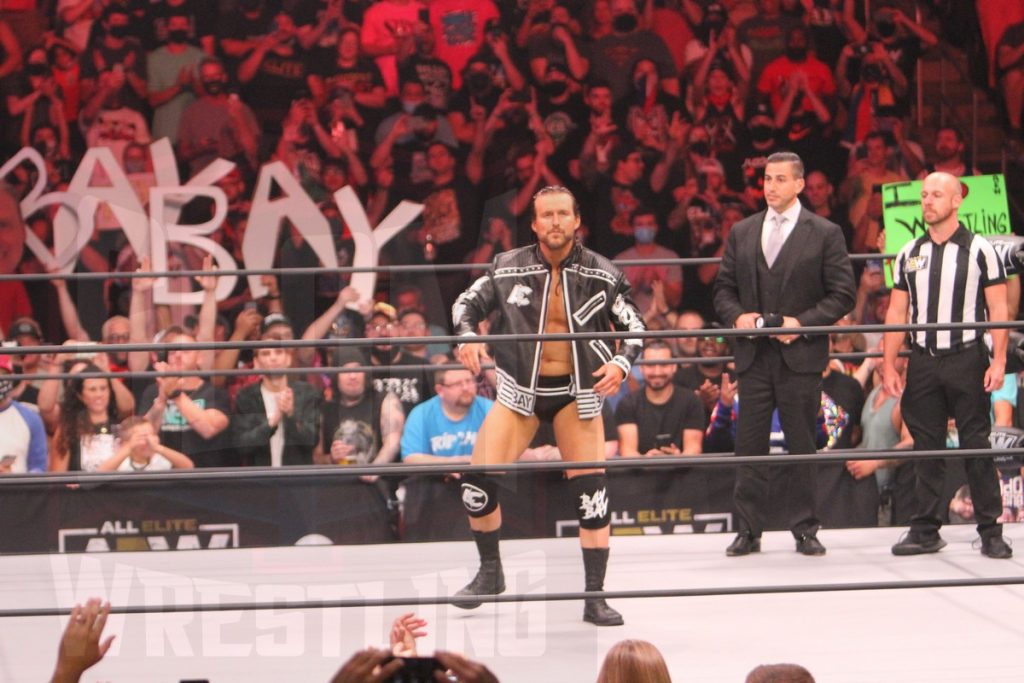 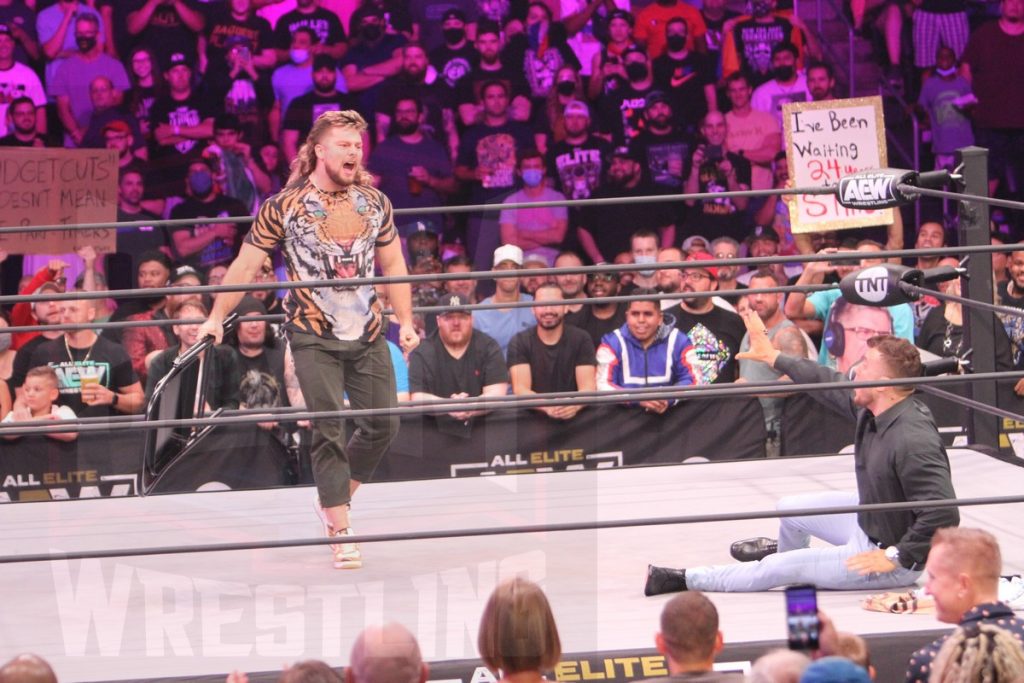 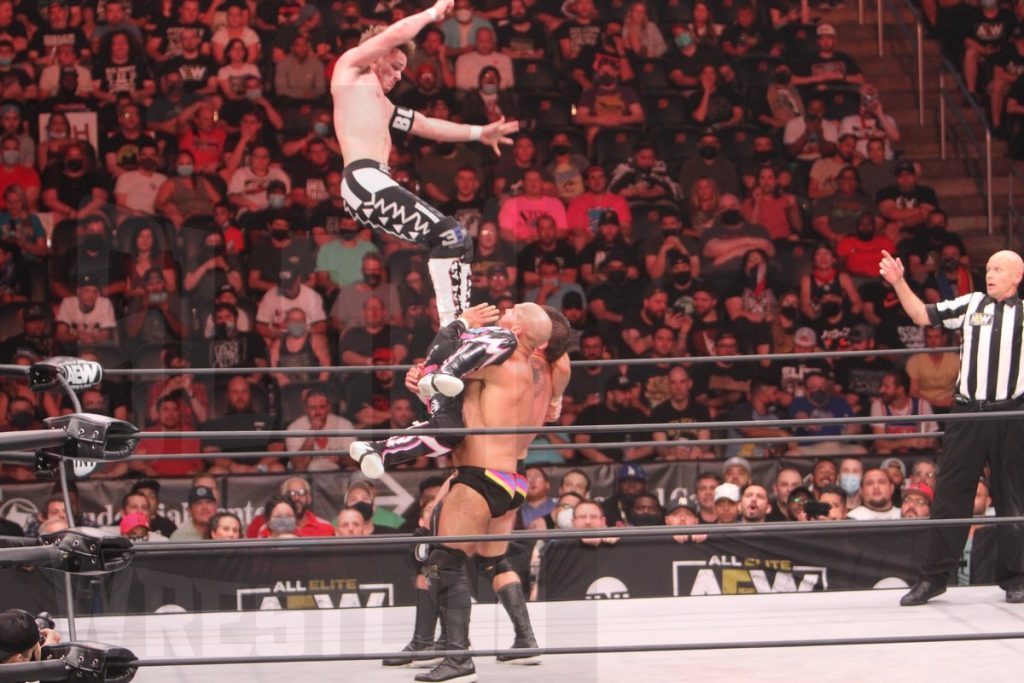 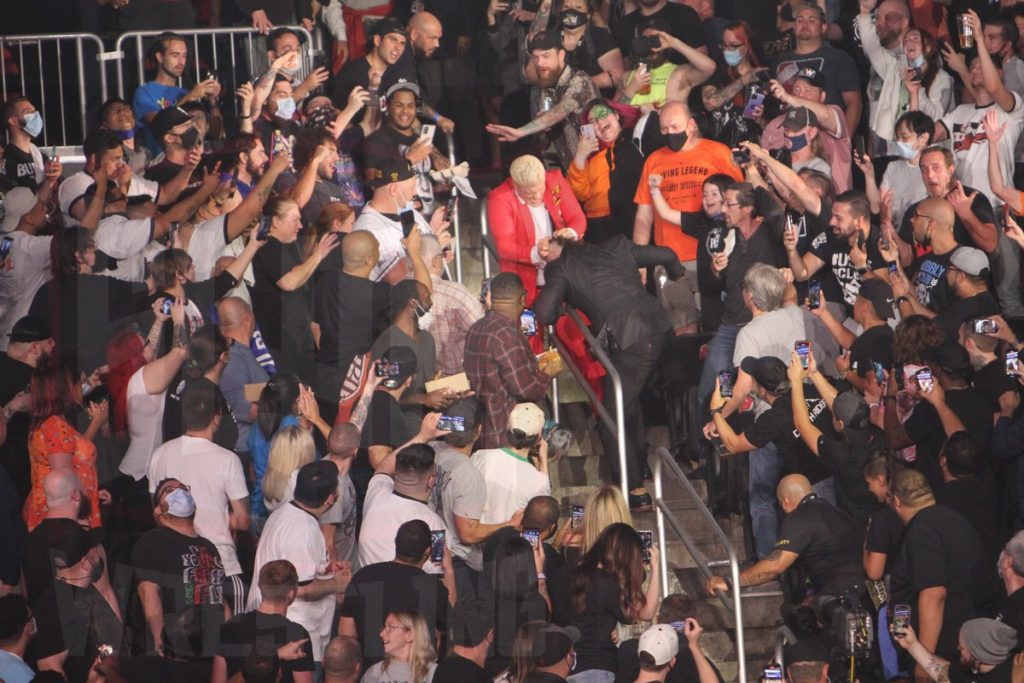 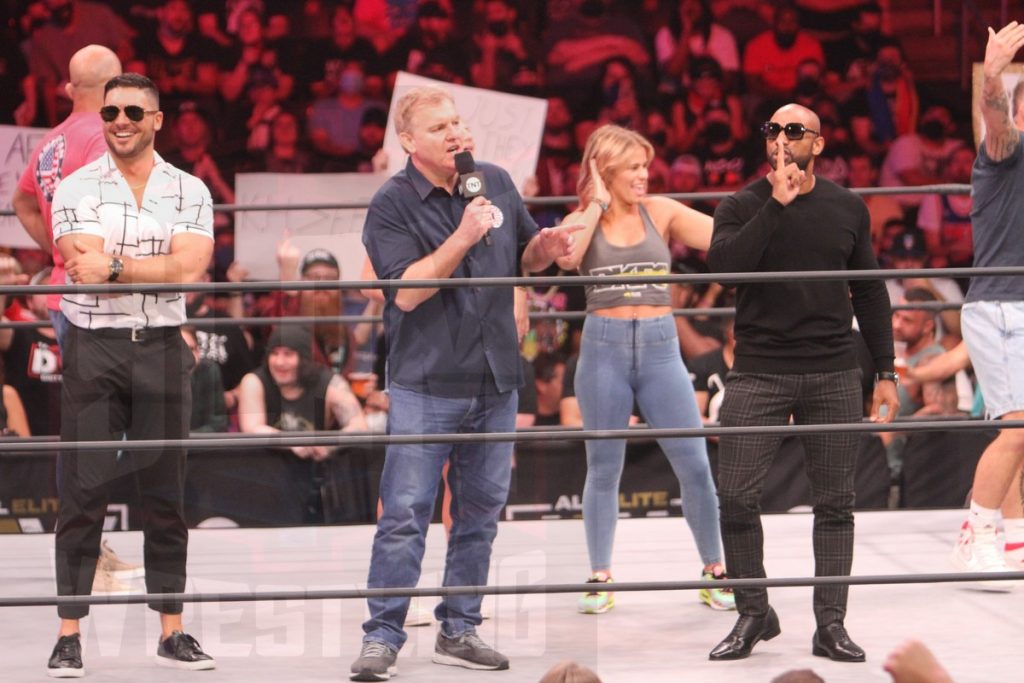 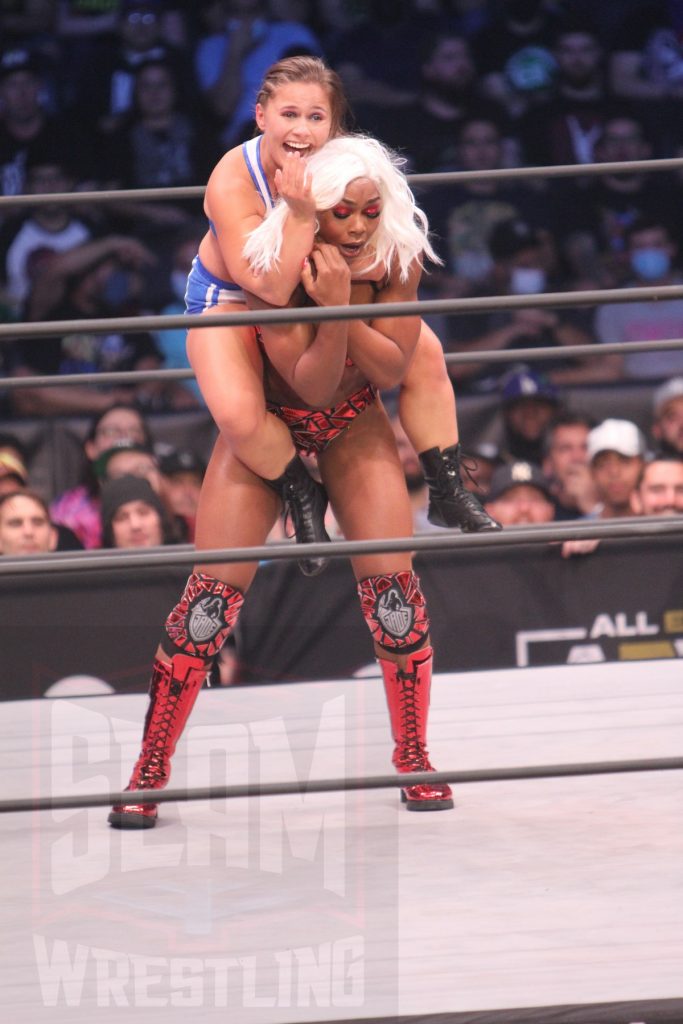 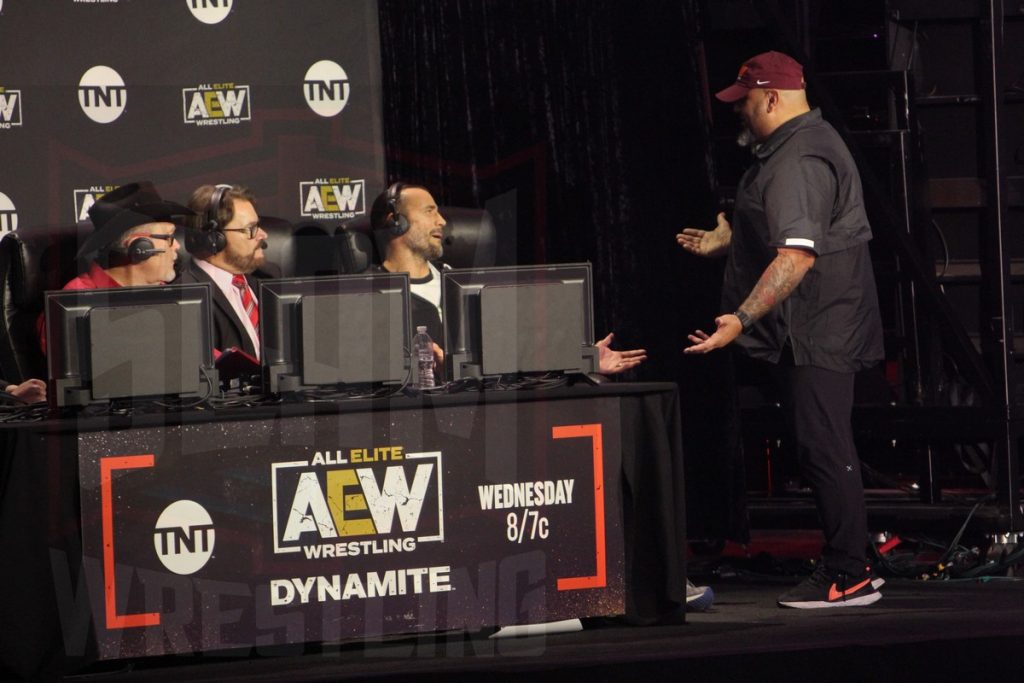 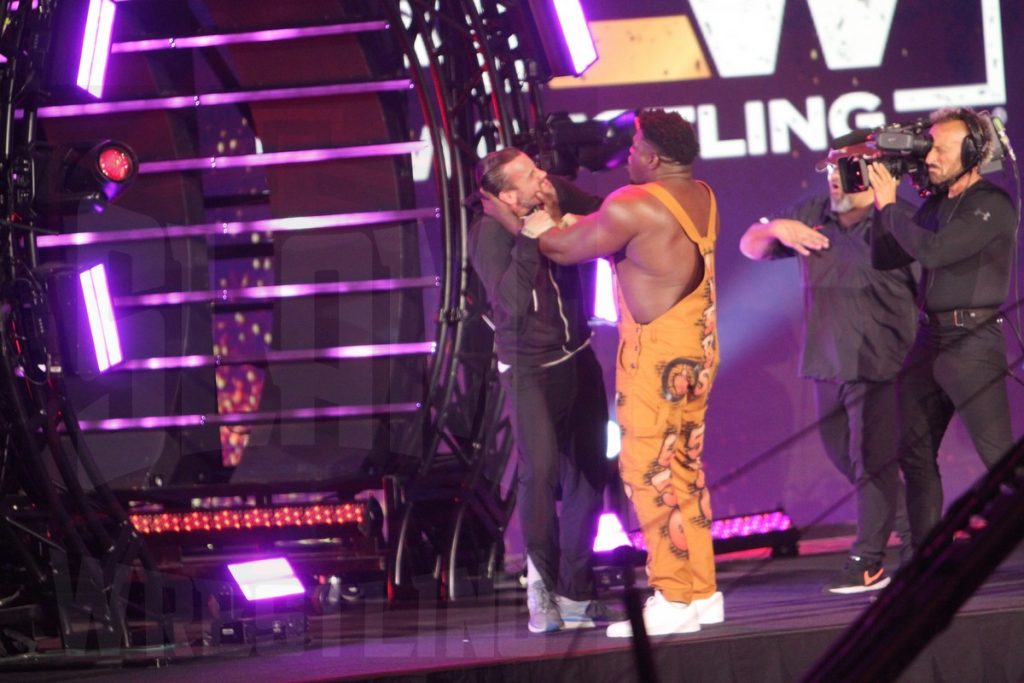 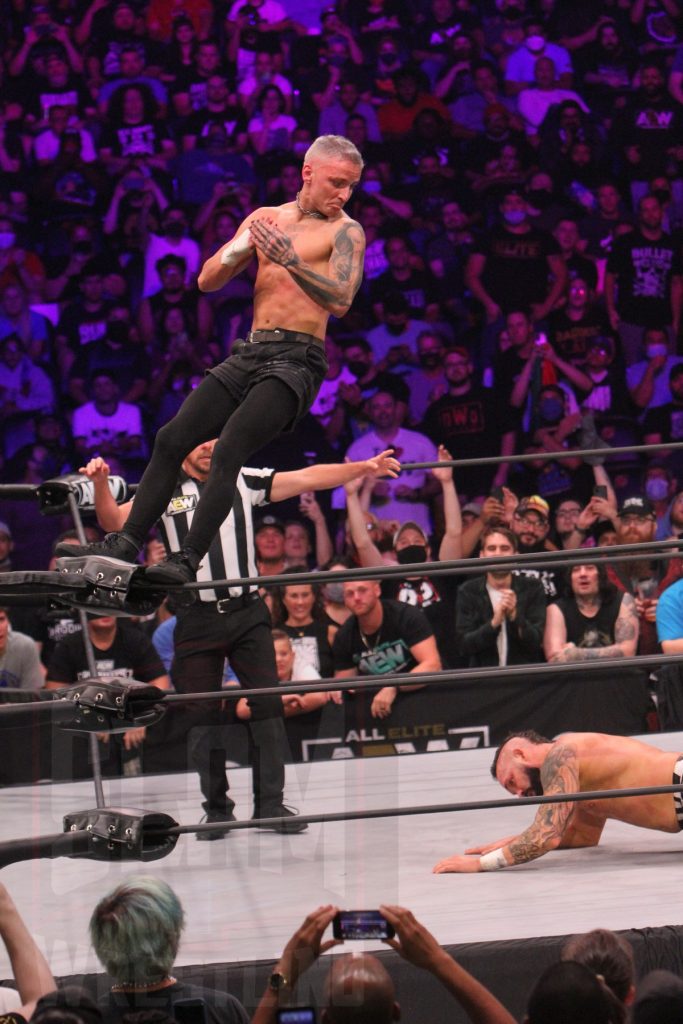 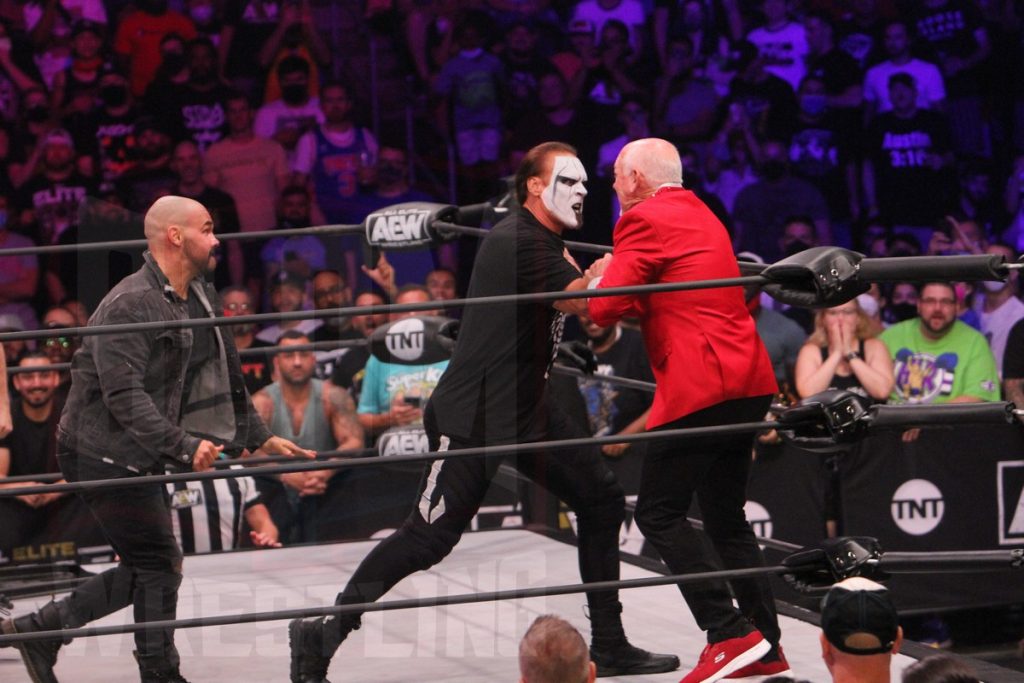 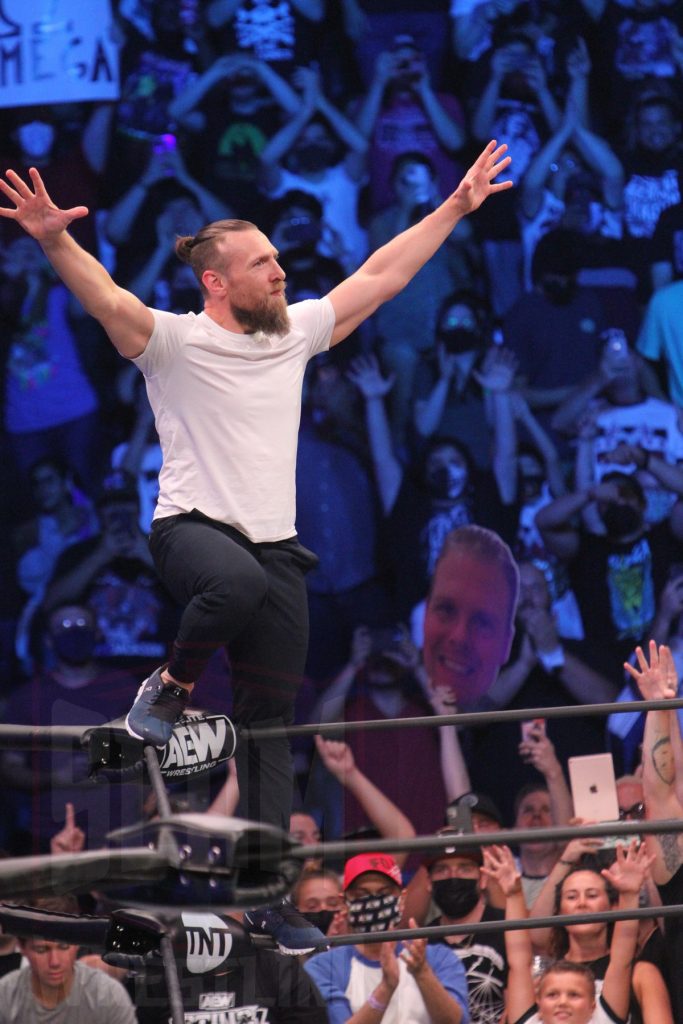 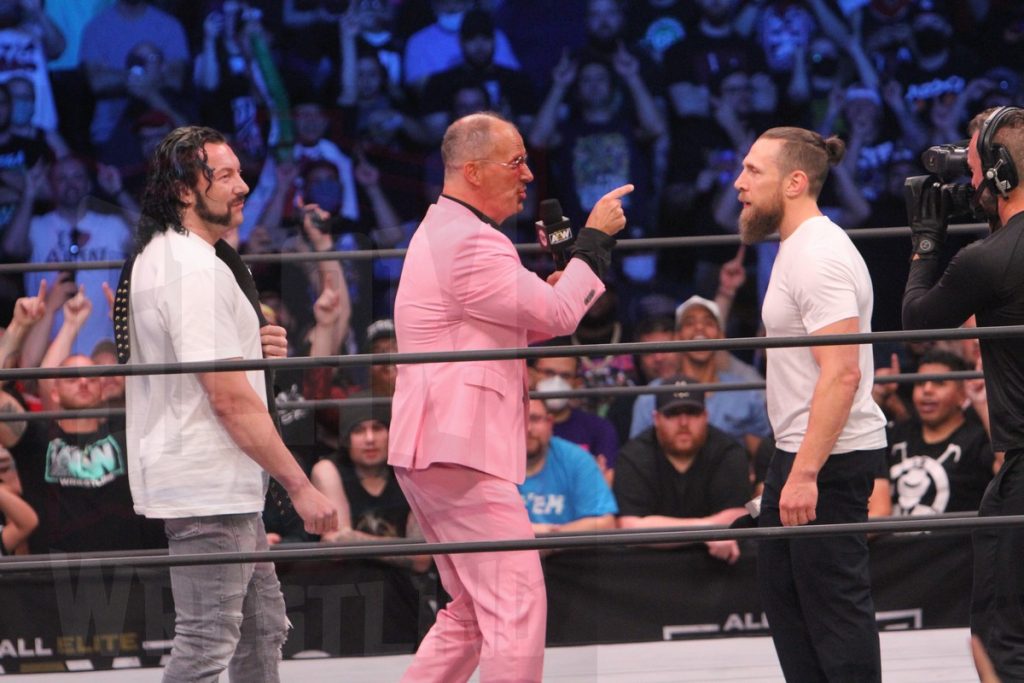 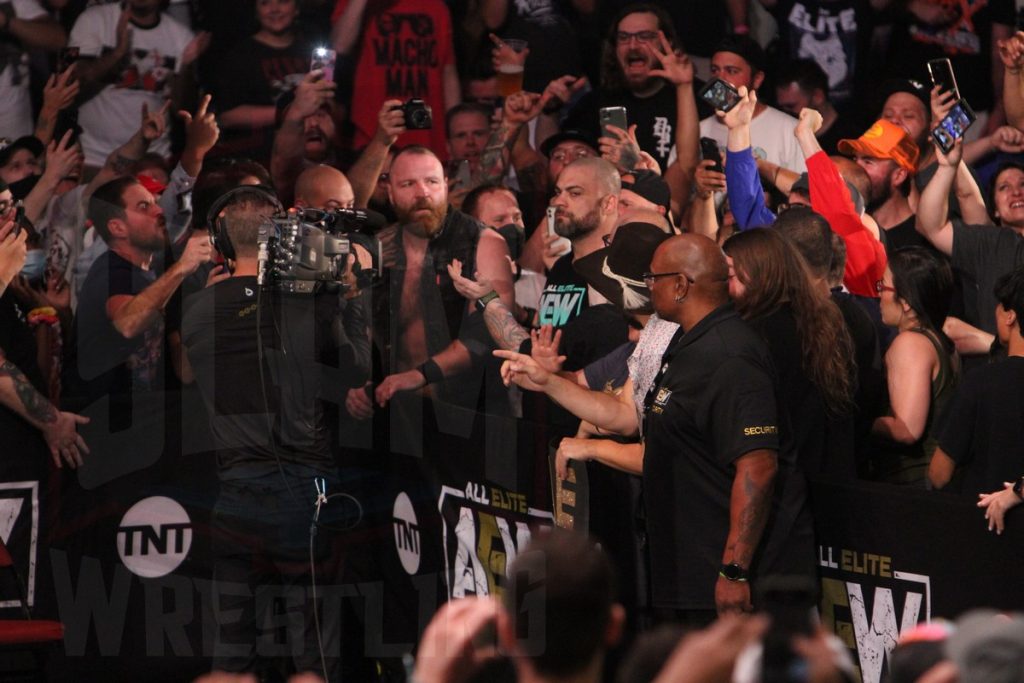 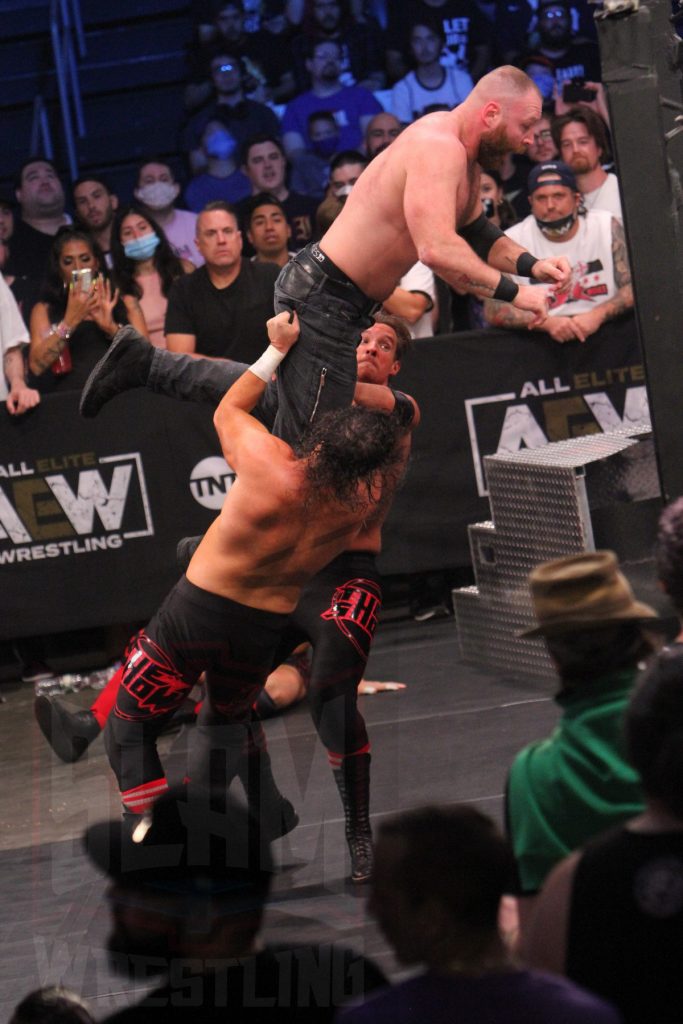 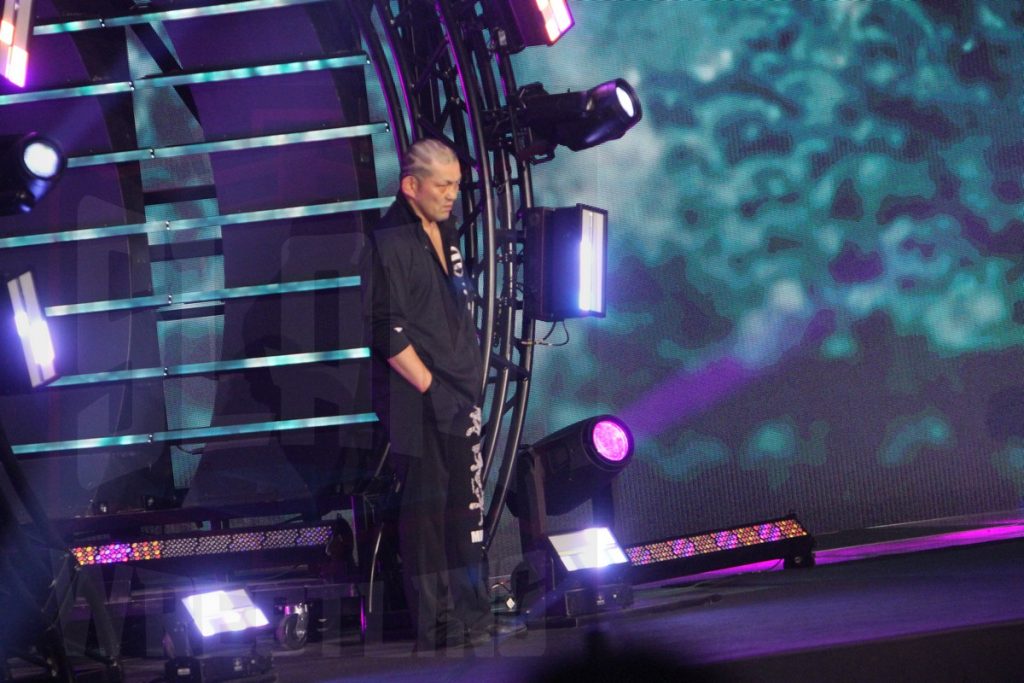 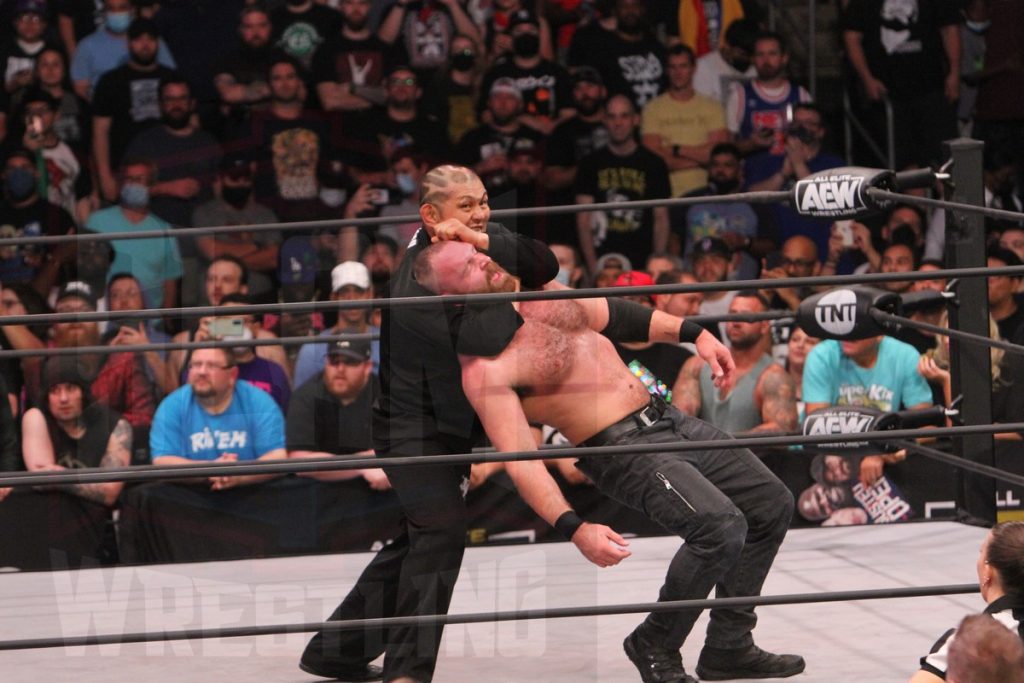 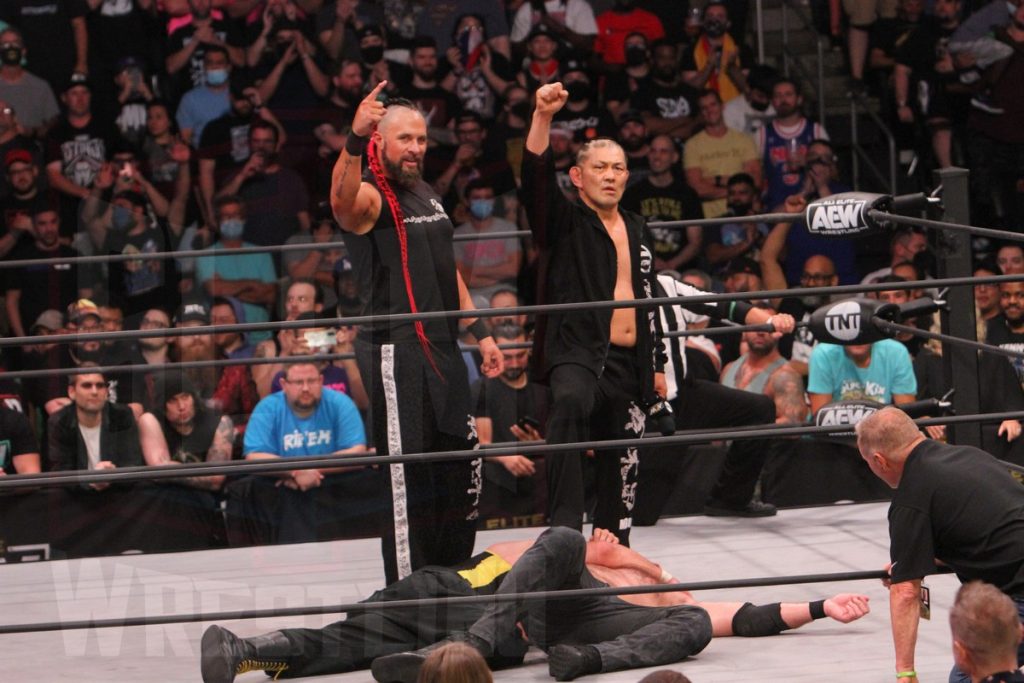 If you’ve been thinking the “AEW has too many wrestlers now” crowd might be onto something, tonight’s episode of Dynamite showed how a larger roster with more high profile names can work. It’s certainly a trickier dance, but some of the feuds are changing up and there’s a really nice mix of veterans and up and comers across most of them. Also, getting Suzuki for more than just a one-shot appearance is quite frankly awesome.