NWA Power: Everyone wants to ‘slap’ gold around their waist 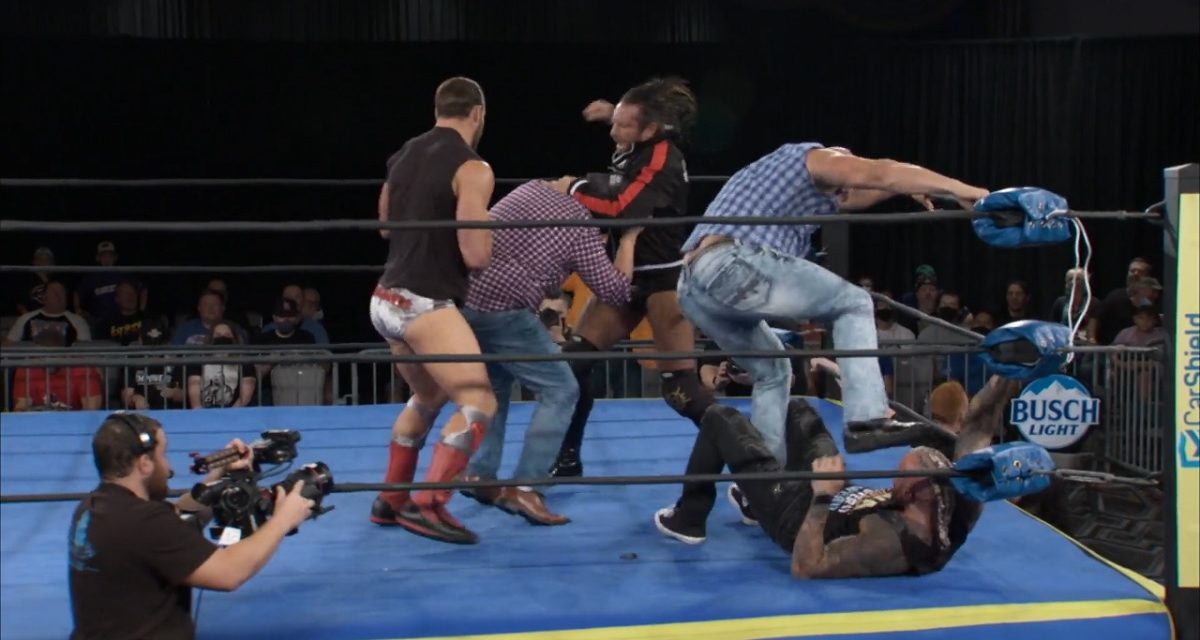 Welcome to this week’s coverage of NWA Power. Our regular recapper, Tommy Martinez, is away on assignment at the Cauliflower Alley Club reunion, so I’m stepping in for him. The company is still riding the momentum from a couple of weeks ago when it ran its big 73rd Anniversary Show and the all-women’s show Empowerrr, so hopefully that will make this episode one to remember.

Joe Galli, Tim Storm, and Velvet Sky are at the commentary desk, and they announce the line-up.

Kyle Davis is at the podium with the new NWA Heavyweight Champion Trevor Murdoch. Murdoch calls out Nick Aldis for a man-to-man discussion. Aldis must have been waiting in Gorilla because he pops right out and joins him. Murdoch acknowledges that over the past little while, they were doing what they can to antagonize each other. But Murdoch gives Aldis his due, and tells him that he has nothing but respect for Aldis and how he carried the championship. He says that Aldis truly made him earn the championship. And, to show his respect, he gives up the mic to Aldis to say a few words.

Aldis humbly talks about his training under Harley Race, and recalls that during his training, Murdoch came to Harley’s school one time as a guest trainer. At that time, Aldis asked Murdoch to come to the NWA and help preserve traditional wrestling in NWA. Aldis said that if he had to lose the title, he was glad to lose it to Murdoch. And now Murdoch deserves the opportunity to represent the company and live up to Harley’s example. Aldis says that he has to step away for a little while, and offers Murdoch some encouraging words as he goes forth as champion.

Aldis tries to leave, but Murdoch stops him in order to shake his hand. And with that, Aldis heads off.

This was a good segment. It was refreshing to see the handing of the torch from the former champion to a new champion in a respectful way, and not bogging down the segment with run-ins and a parade of new challengers like would have been done in other companies. I wouldn’t want to see this kind of slower segment all the time, but for these two, it worked well.

During this match, Stevens seemed to be in a funk, and the commentators speculated that he was feeling low because of his recent Tag Team Championship loss. Kratos seemed unaffected, though, as he basically muscled right through the Rude Dudes. This was a power move clinic by Kratos, and he pretty much squashed the Dudes, pinning Stanley after a big Deadlift Suplex.

After the match, they went to the podium to talk with May Valentine. Stevens tried to talk, but Kratos stopped him. Kratos said that while most people expected the team to split up after their loss, their bonds were tighter than that and he would have Stevens’ back no matter what. He tried to give Stevens a pep talk, saying that even if Stevens couldn’t see it in himself, Kratos knew that he has what it takes. Stevens, still appearing to be doubting himself, simply said that he had some decisions to make.

This was fine. It was more of an angle than a match, but both guys did well. With his size, Kratos seems like he would be a natural for WWE at some point and you know that Johnny Ace has to have his eye on signing him should he want to go.

Kyle is back at the podium with Cowboy James Storm and on the other side is the Sinister Minister James Mitchell with Judais. Storm challenges Judais to a match, and offers Judais the right to pick the match stipulation in exchange for him putting up his number one contendership to the NWA National Championship.

Mitchell declines the offer and insults Storm. He says that if Storm wants a fight, that’s fine. But the contendership is not on the table. Storm doesn’t take kindly to that and yells at Mitchell and Judais who make their exit.

This was fine. Storm and Mitchell are always good promos, and this was pretty cut and dry.

Melina replaces Tim Storm at the commentary desk for this one, and dissed Kamille, the NWA Women’s Champion. Better talking about that than the match, which was pretty bad. These two looked as green as grass and nothing they did looked good. Belle won with a Hell’s Bells (Pedigree).

After the match, Kamille attacked Melina at the commentary desk from behind, and left her laying. Storm and Sky’s reactions to this attack was almost as bad as the match that preceded it.

Kamille was great. Nothing else about this was.

May Valentine was at the podium with Pope. Pope said that everyone was wondering when he would cash in his opportunity at any title of his choosing. Pope said that while he respects Trevor Murdoch, it would be his World Championship that Pope would be coming for, putting Murdoch on notice.

He left and May turned her attention to JTG and Colby Corino who were hanging around the podium during Pope’s time. JTG and Corino have a Tag Team tournament match next week against Hawk Aerie. They were angry and threatening.

Then May introduced Chelsea Green and Kiara (spelled differently than how she used it in Impact and AEW) Hogan. Chelsea crazily screamed that the next time she sees Kamille, she’d kill her. Hogan, meanwhile, said was more bothered that Mickie James wasn’t complimentary towards her, and that she wants to have a conversation with Mickie.

Pope was good, but nothing else in this segment was. Corino and JTG seemed like they flubbed their lines. Green’s psycho character just came across as goofy, and Hogan was more sulky than badass, which is not a good look in a wrestler – especially when she can cut good promos if given the chance.

The winner of this match becomes the number one contender to the NWA Television Title. Boy, there are a lot of championships in this company. There are a lot of people at ringside, too, which the commentators note, including wondering who Idol is even managing in this one, since both Cyon and Clearwater are part of his stable. BLK Jeez is also out there, and it’s eventually explained that he’s also part of Idol’s stable.

Despite being in a stable, Cyon and Clearwater go after each other whenever they’re not beating up Plunkett either individual or collectively. At one point, Cyon powerbombed Clearwater and looked like he was going to get the pin, but Clearwater got his shoulder up, so Cyon smartly rolled him over into a Boston Crab. But then Idol loaded his fist and clocked Cyon in the face from the outside. This wasn’t timed well, since it was after Idol hit him that BLK Jeez jumped on the apron to distract the referee. Clearwater then covered up a knocked out Cyon for the easy pin.

After the match, TV Champion Tyrus came out and stood at ringside, staring menacingly at Clearwater.

This was okay, but the botched finish looked really sloppy.

Trevor Murdoch came out to referee the Slap Fight between Crimson and Jax Dane. The rules for this one is that the two will exchange open-handed slaps until one of them is either knocked out or quits. Dane hit the first slap, which looked painful. Crimson then got his first one in, and that looked bad, too, and almost seemed to knock Dane silly on his feet for a second. If I ever agree to get into a slap fight with someone, do me a favour and knock some sense into me, please (but no slapping, because that looks brutal).

Dane went for his second one, but instead of slapping Crimson, hit him with a cheap shot punch to the jaw, knocking him down. Dane tried to attack a downed Crimson, but Murdoch stopped him. Until Strictly Business ran in and put the boots to Murdoch. And then chaos ensued.

Pope ran in to save Murdoch and the two of them cleaned house. Judias and Mitchell ran down followed by Chris Adonis and James Storm. Pope did a dive onto somebody on the floor from the top turnbuckle. Others brawled inside and around the ring, using the announce table and ringside barriers to hurt each other. The show ended with everyone brawling.

With so many feuds interweaving into each other and so many people having title opportunities owed to them (in addition to Pope, the announcers said that at least one other person had the right to cash in a title shot when they wanted), a little more clarity would be welcome. Still, it doesn’t take away from the fun ending to a pretty decent episode.