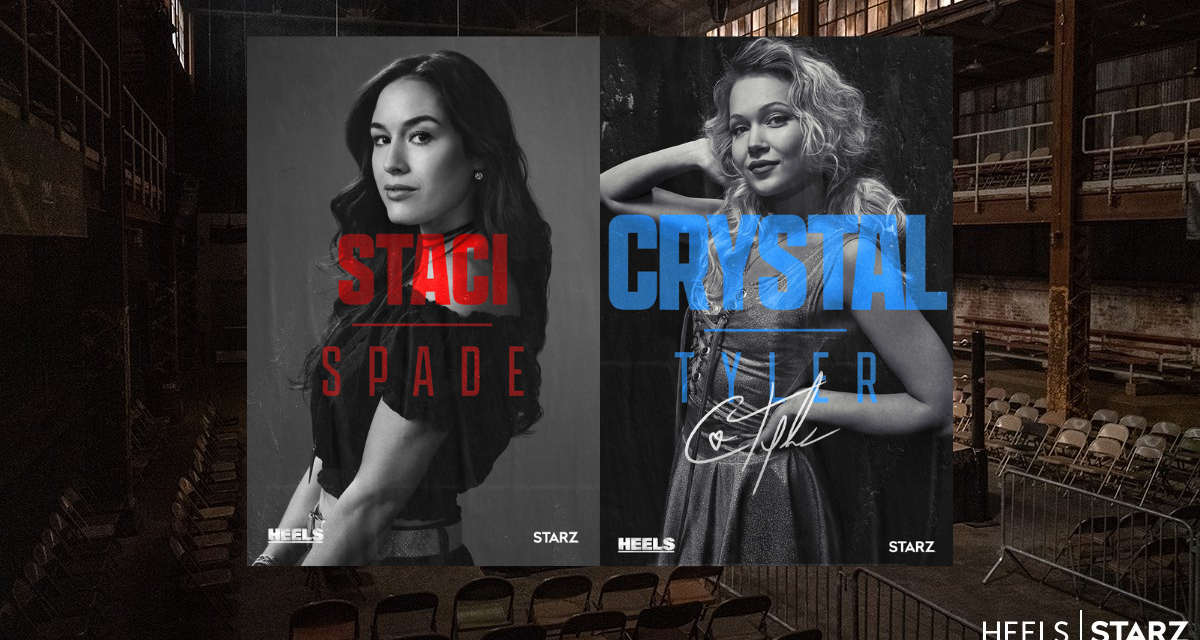 Stephen Amell and Alexander Ludwig may be the male leads on STARZ’s newest series Heels, however, there are also a pair of female leads that are just as important to the show as their male counterparts.

Aside from the wrestling hijinx and rivalry between the Spade brothers, Staci and Crystal are also at the forefront of Heels in terms of their own dilemmas and storylines.

Luff’s character Staci struggles with the burden of being a wife to a wrestler, the problems it brings to the home, and the constant battle between in-ring persona and real-life person Jack Spade. The story of the partner, especially in regards to sports such as pro wrestling, MMA, or boxing, is one that is often explored and it usually presents their story as being difficult and full of worries. Heels is no different.

“I have the advantage of being married to another actor, someone in an industry that takes a lot of hard work and a lot of resilience, so I know the kind of toll that puts on someone,” Luff told SlamWrestling.net. “The main research I did for Heels was I tried to study as much as I could on stories of the partners, so I watched Beyond the Mat and Dark Side of the Ring or I deep dived and Googled stories of the wives of these wrestlers, and the impact this career and craft has on a family unit. But I think this is a universal theme, I think it’s anybody who has a hard-working spouse and the toll that it takes, even a sense of guilt on holding the spouse accountable when they’re trying to live out their dreams. As the wife, Staci is constantly trying to navigate through supporting her husband but also making sure he’s not abandoning his responsibilities at home and with the family.”

Berglund’s character Crystal is also in the midst of her own trials and roadblocks to get through, as she tries to prove her capability to work as an in-ring talent aside from just being a valet. Crystal searches for any means possible to get the chance to step into the ring. In the life of actress Kelli Berglund, this role is very similar to her early start in acting and simply trying to get her foot in the door to get noticed.

“When I’m asked how I relate to Crystal, that’s sort of the first place I go, having a dream, being a young girl, and visualizing where I want to be at,” said Kelli Berglund. “I started acting when I was super young, 9-years-old, and I’m still in this business now. When I was that young, I had these big dreams for myself and I wanted to do whatever I could to achieve them and work my way there. And like Crystal, she grew up going to the Duffy Dome and idolizing these people, and wanting to be a part of it. She does whatever she can to get her foot in the door, and that starts with her being a valet, and hopefully working her way up to getting into the ring.”

Luff also found a way to connect her life experiences, especially with her background in theatre, to the world of wrestling which had been foreign to her before starting work on Heels. “I didn’t know a whole lot about wrestling going into this,” she admits. “I mean, I watched a little bit as a kid, but I didn’t quite understand it. I was like, ‘It seems fake, but it also looks like it hurts a whole lot’. After working on the show, it reminded me a lot of theatre.”

“It takes a lot of hard work, it’s hard on your body, it’s hard mentally, and it’s hard for all the people around you, because in order to do theatre you have to be extremely dedicated and extremely passionate about what you do. It’s not an easy road to go down, it’s not an easy career to make money off of, and so I think it’s probably very similar to wrestling.”

In the world of professional wrestling, the representation of women has shifted from the past norms, such as the over-sexualization and lesser roles, to women being in the main event and even having shows dedicated to all women’s wrestling. This is no different from the representation of women in other fields, including film and television, where women have also been shown in the spotlight as empowered, strong, heroes in their own right. This is the image in which the female stars of Heels also aspire to portray.

“All the women in the show are the heroes that don’t wear capes,” said Alison Luff. “They’re the reason that everything can happen, they are the backbone of this community, and I love representing that through Staci Spade. I think that it’s easy to look at the matriarch in a TV show as somebody who is secondary in their own life — they’re a mother to their child, they’re a wife to their husband. But, I think that’s where (Staci’s) strength comes from. I’ve really enjoyed leaning into the vulnerability and loyalty of Staci. I think it’s easy to find strength in women and draw from ‘She’s feisty’, or ‘She’s fierce’, but her superpower is supporting. It is strength.”

Berglund concurs, though from a different perspective. “I’m so glad that Crystal is there as this kind of female representative, for a girl that has a big dream in wrestling,” she explains. “Wrestling’s past has evolved to now a point now that is much more inclusive and shines a light on women, and I think we’ll follow Crystal’s journey in a very similar manner throughout this show. She starts in a place where she’s treated a certain way, that’s very obvious to the audience, and you just want to root for her. As the show goes on, we shine a light on Crystal and her abilities, as well as her place in this world. I don’t think this is limited to just wrestling, but also to young girls who just have big dreams, whether it’s wrestling or it’s something else. Like I said, this was how I could relate to Crystal when I took on the character.”

Catch Alison Luff and Kelli Berglund as the female leads on the upcoming drama series ‘Heels’, premiering August 15th, only on STARZ and the Crave video subscription service in Canada.

Stay tuned to Slam Wrestling for further features on the cast and crew, along with reviews of each episode this season.