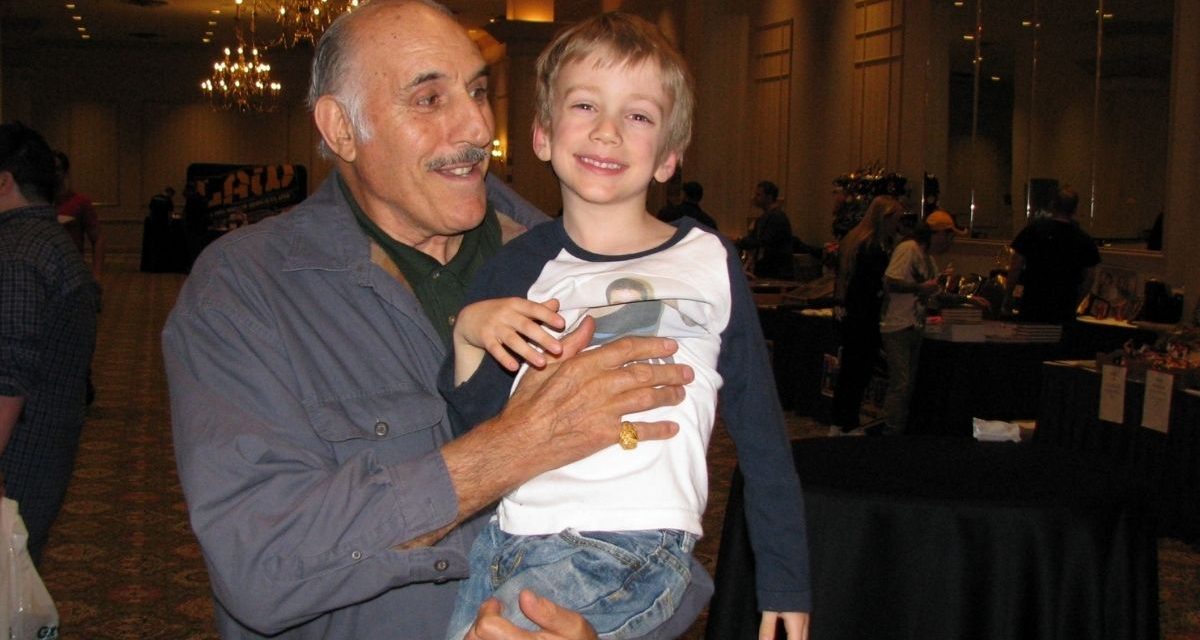 Taller than me, awkwardly boney, and very much a teenager, I asked my son, Quinn, for a hug last night, crying at little at the memories of Dominic Denucci, who died on August 12.

Friday morning, still reeling from the loss of my friend, I found the picture that was stuck in my mind as I tried to drift off to sleep last night. It’s Quinn, wearing a John Quinn iron-on T-shirt, in the arms of Dominic, from WrestleReunion in Toronto in 2012. It’s at the top of this page.

Dominic had such a great life.

That I got to detail a little of it through the years is just a bonus.

When I’d phone him, it would be “Why youa not call?” Meaning he liked to talk wrestling; to a degree, I think Dom felt forgotten by pro wrestling, even if he wasn’t. Perhaps that was partly because he’d settled in the WWWF, content to put others over, and those that saw him didn’t see the main eventer that he’d been in Australia, in San Francisco, in Buffalo, in so many places. He chose to get a real job, with a pension and health care, driving a newspaper truck, rather than just be a professional wrestler. Dom wanted to provide for his family.

And I called Dominic often. There are 11,000 words in my file on him from our talks, but the thing is that I often asked him about other people. He was always great for a quote, a no-BS answer.

A couple of forgotten names as examples:

Buddy Austin: “Buddy Austin was very smart at creating the wrestling, but, it’s no good to say, but he was an alcoholic, drugs, and everything else. That’s why they shot him in Australia. First they beat the shit out of him one time, then the second time, they shot him in the stomach. When he died, the bullet was still in there.”

I’m pretty sure that I first met Dominic in person at a Cauliflower Alley Club reunion, and Steve Johnson snapped a photo to prove it, though I know I saw him on some shows in southern Ontario in the late 1980s. 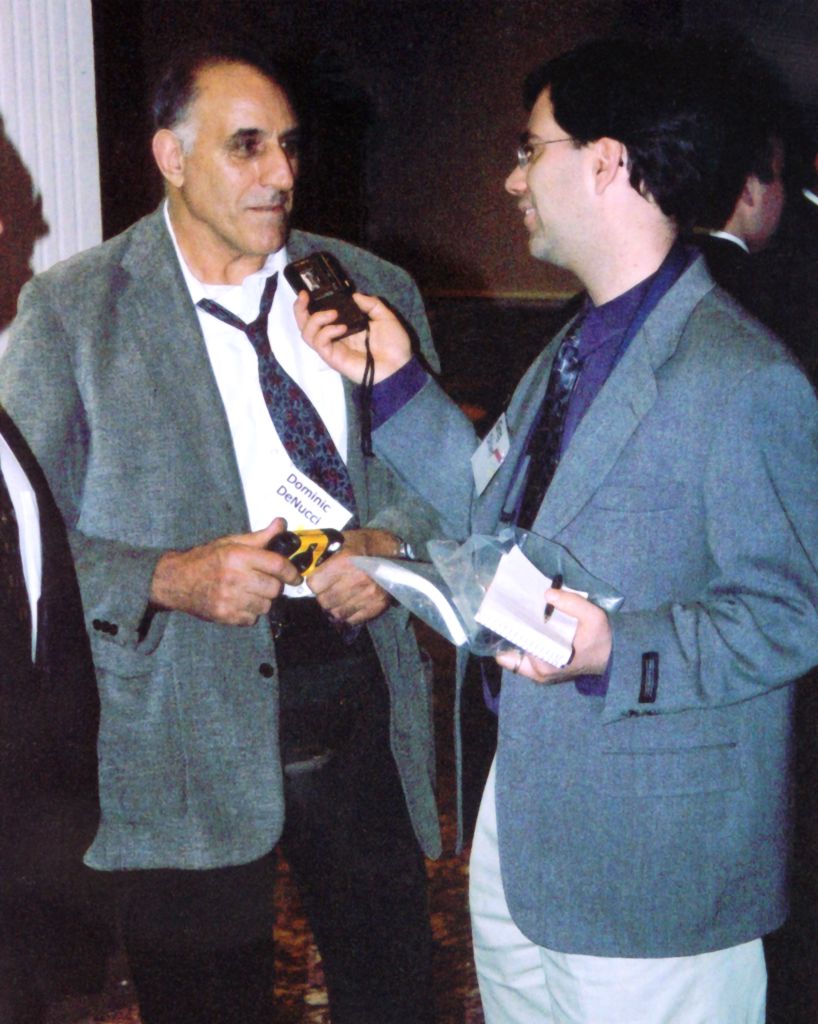 This is probably a Cauliflower Alley Club reunion in 2004, since I can see a copy of The Pro Wrestling Hall of Fame: The Canadians, in my left hand. Photo by Steve Johnson

He’s in my first book, The Pro Wrestling Hall of Fame: The Canadians, in the Adopted Canadians section. It’s tough to check quickly, but I’m pretty sure he’s in every other wrestling book I did too, since he was knowledgeable, available, and fun to talk to on every level. And he’d worked everywhere, and his career brought him in contact with everyone.

In person, he’d call me, “Kid.” He probably did that with everyone. 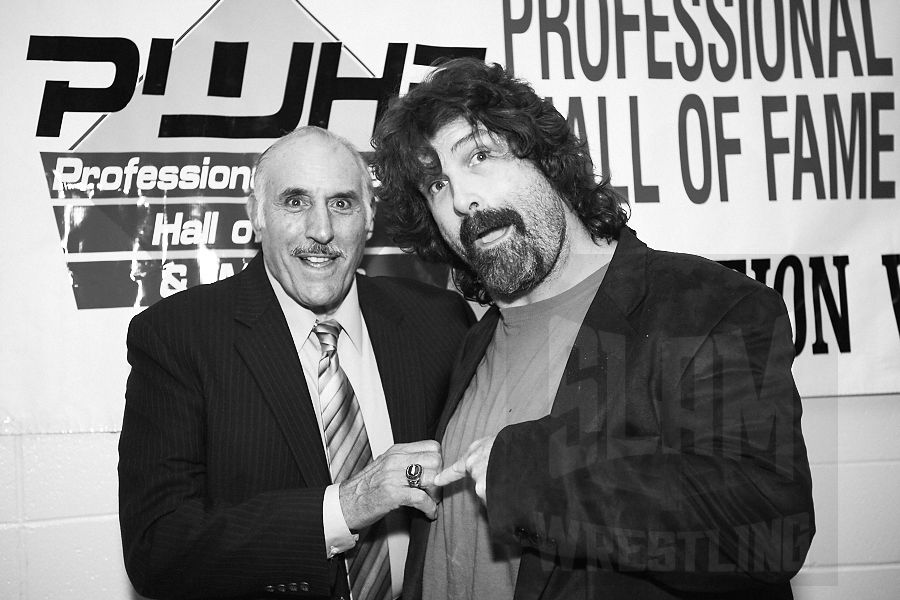 It was pretty special to be there when he was inducted into the Pro Wrestling Hall of Fame in May 2012. We’d gotten to know each other better when he was in Toronto for WrestleReunion in April 2012, so it was only a month later. It speaks to the measure of the man when Bruno Sammartino insists on being the one to induct you, which is what Bruno did for Dom. 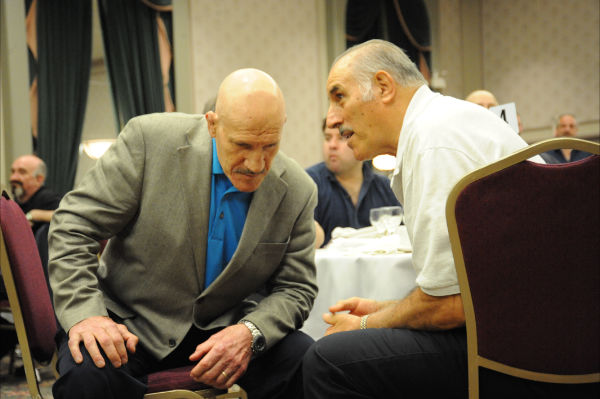 Bruno Sammartino and Dominic Denucci share a moment at the Titans in Toronto breakfast at WrestleReunion in April 2012. Photo by Mike Mastrandrea, www.mikemastrandrea.com

Our last Titans in Toronto dinner was in the fall of 2014. There are so many memories from that event that I helped organize, but reconnecting Dominic with his original tag team partner, Dino Bravo, after 40 years, is right up there at the top. It was like no time had passed as they started talking.

And talking is what I’ll miss most about Dominic, his gentle jibes, his honesty about the pro wrestling business, his Italian accent which would get deeper and more indecipherable as he got fired up on a subject.

“Denuch” was a good man. 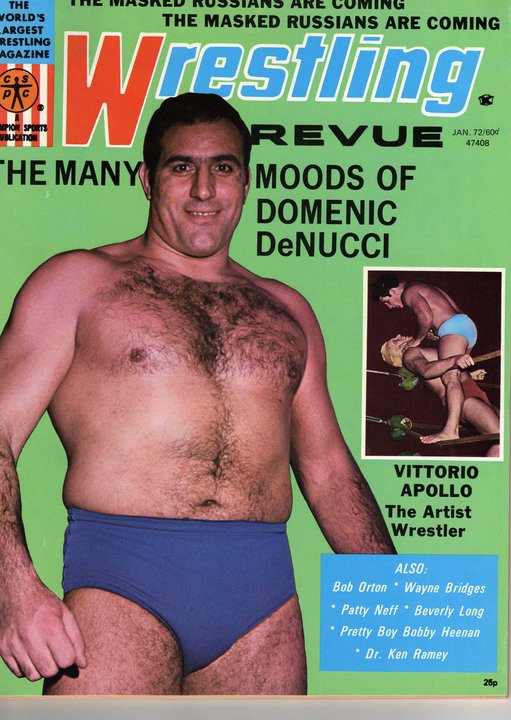 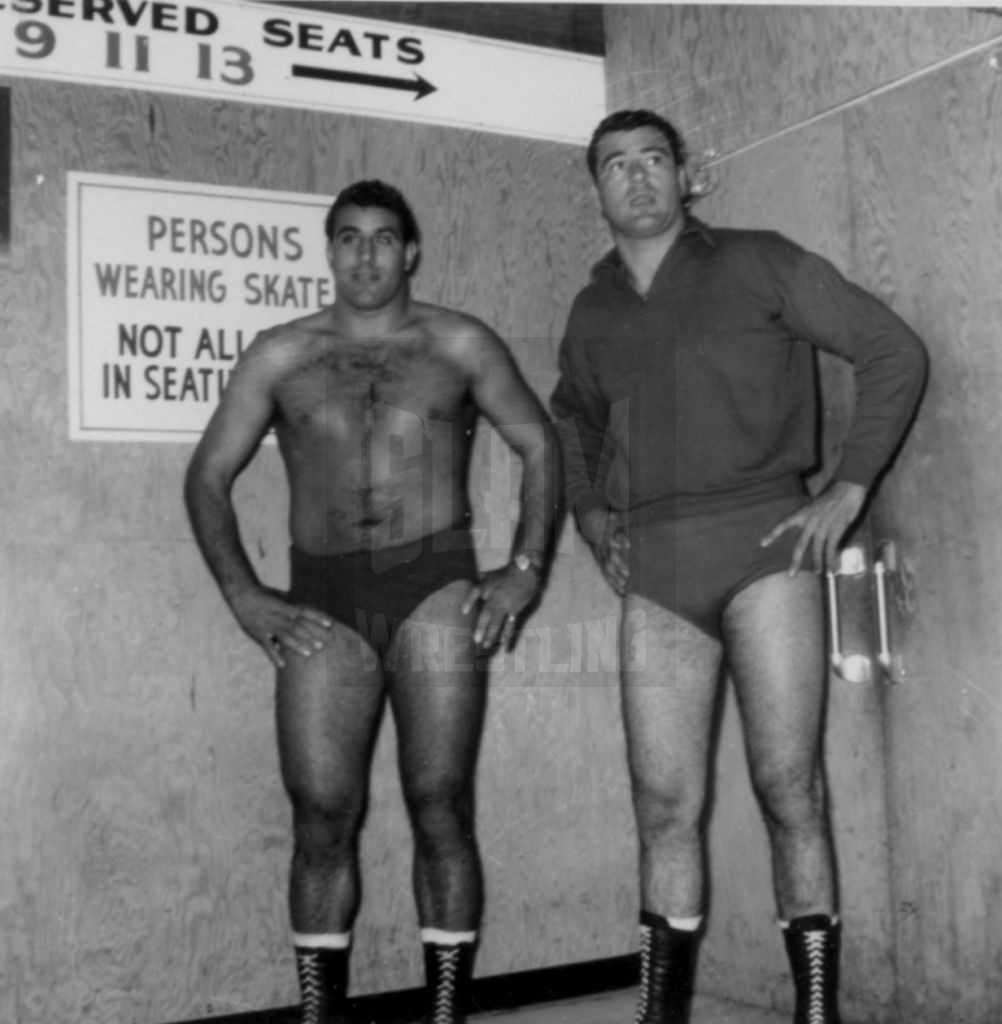 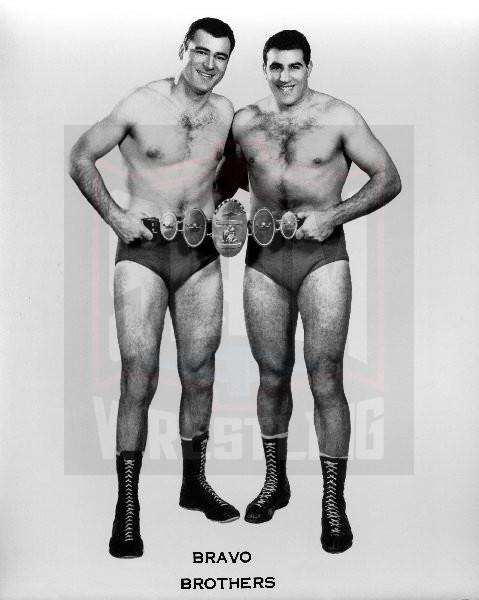 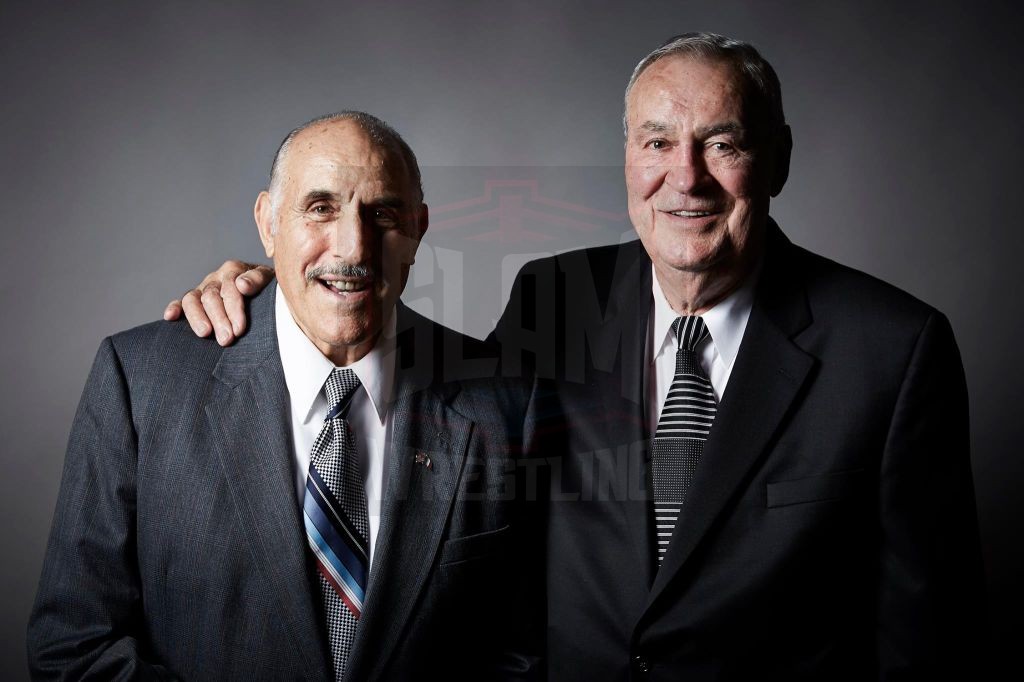 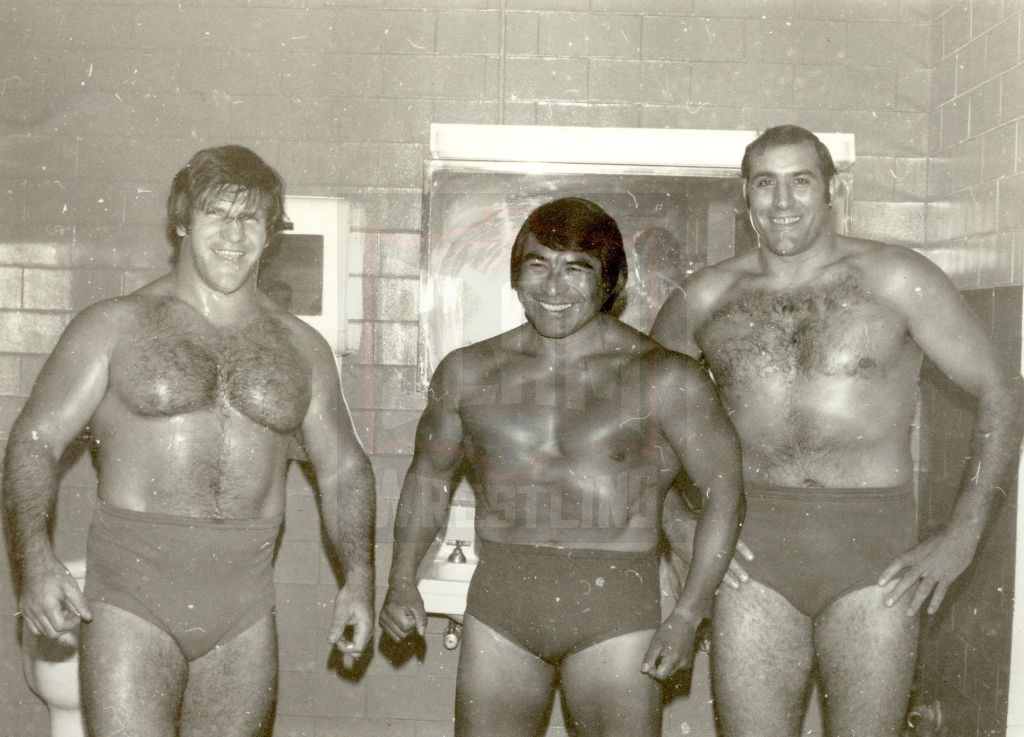 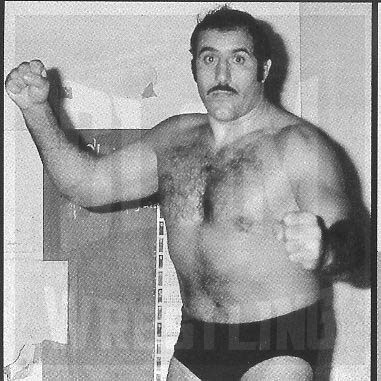 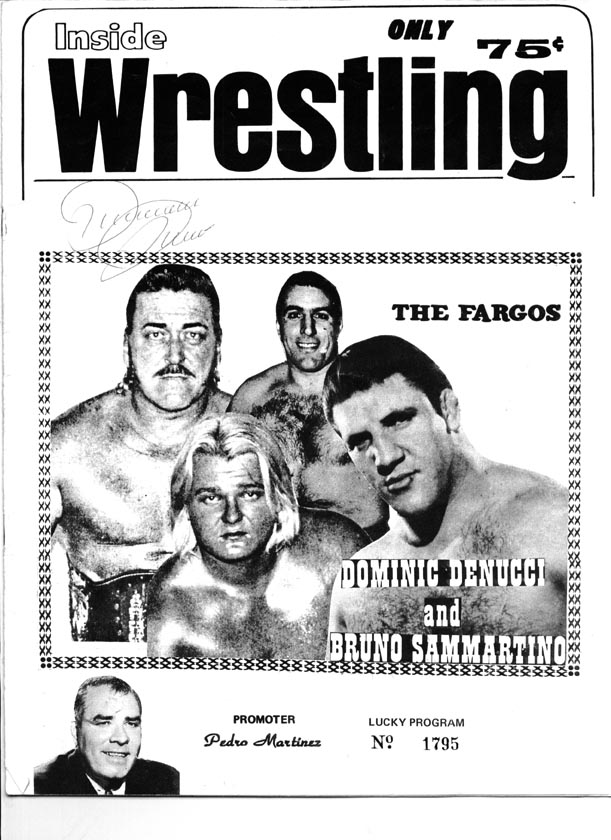 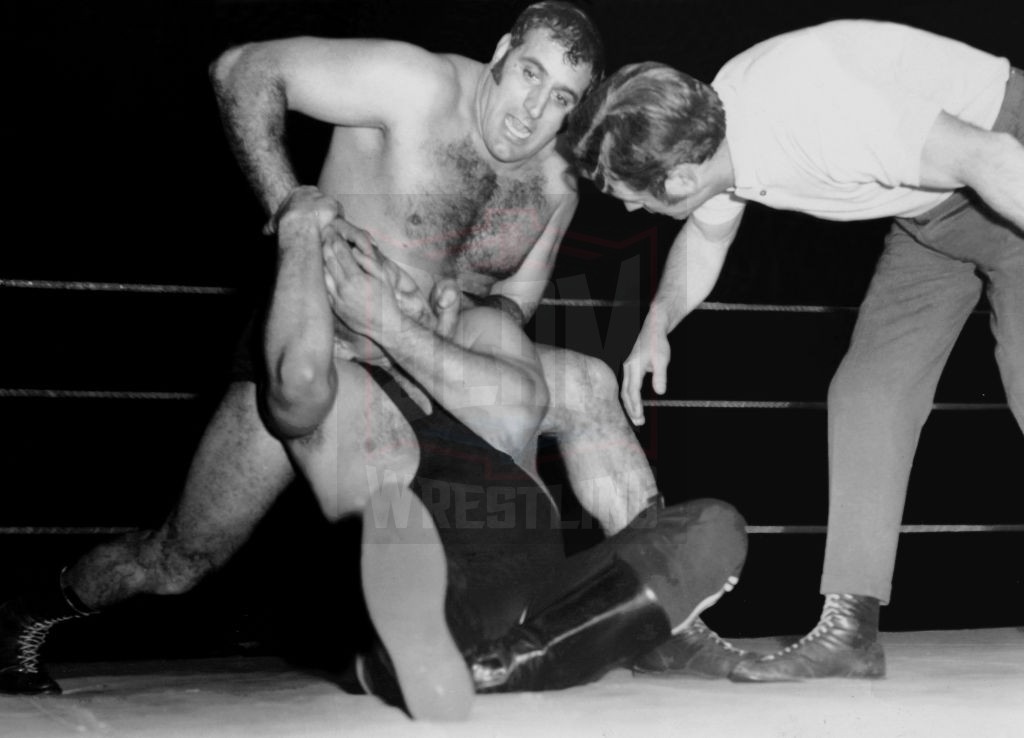 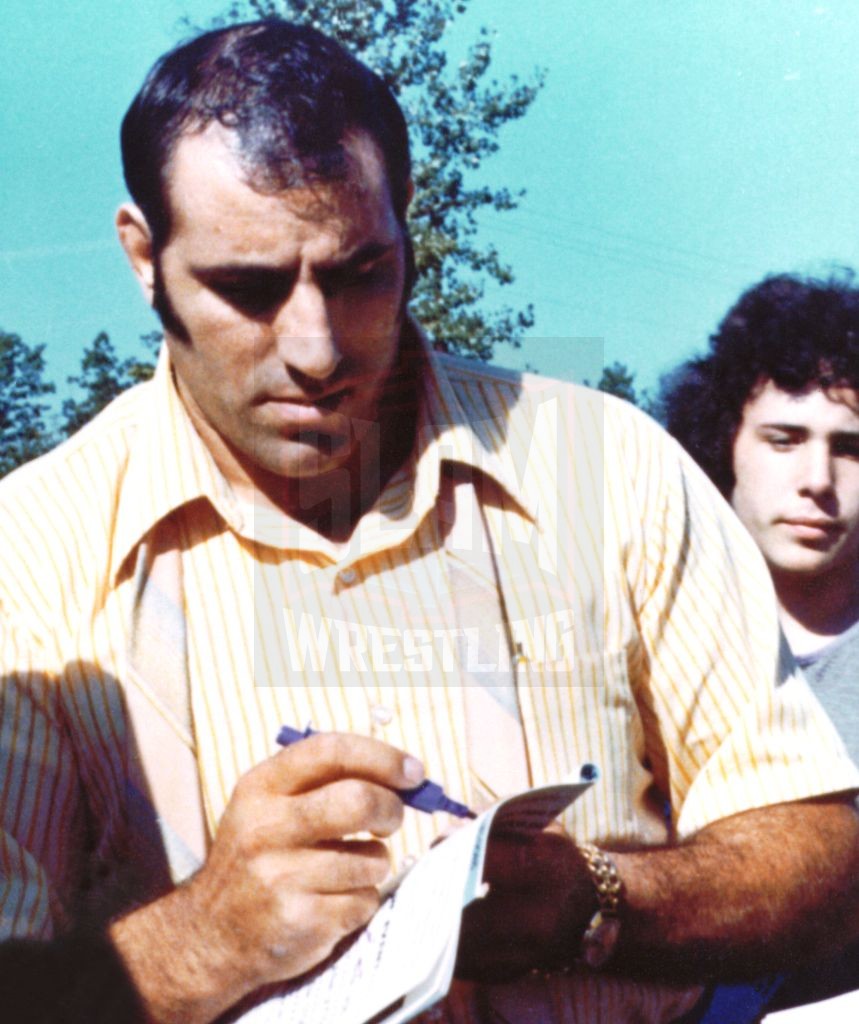 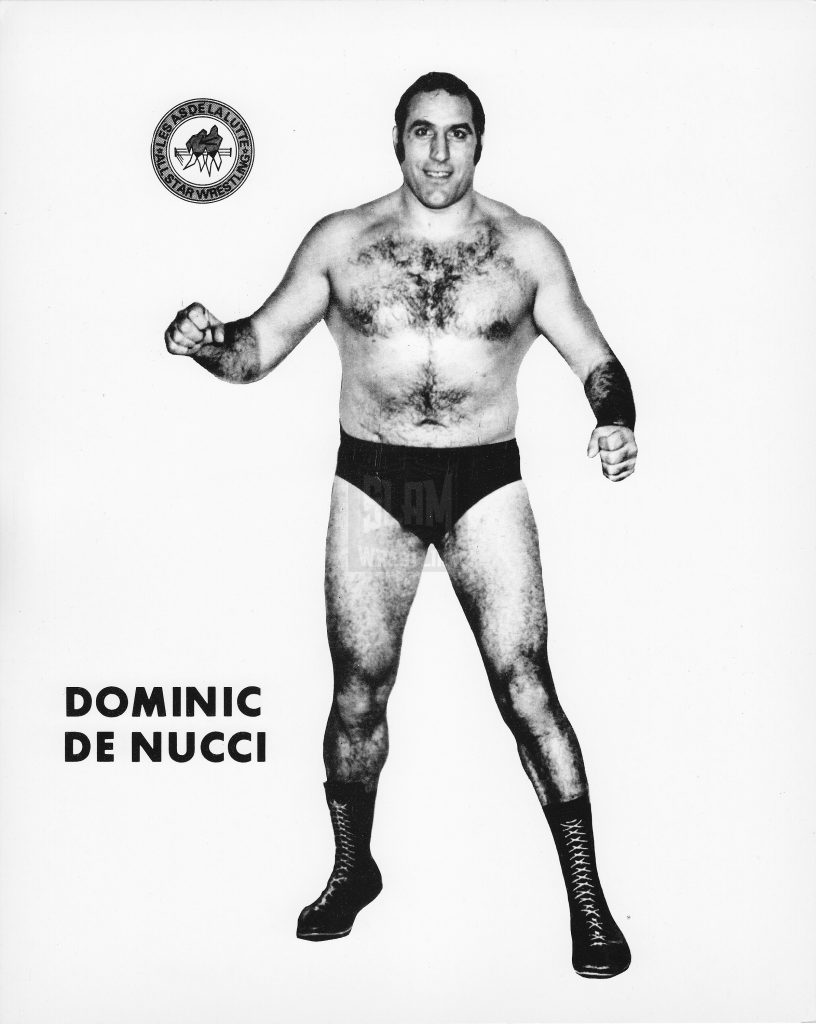 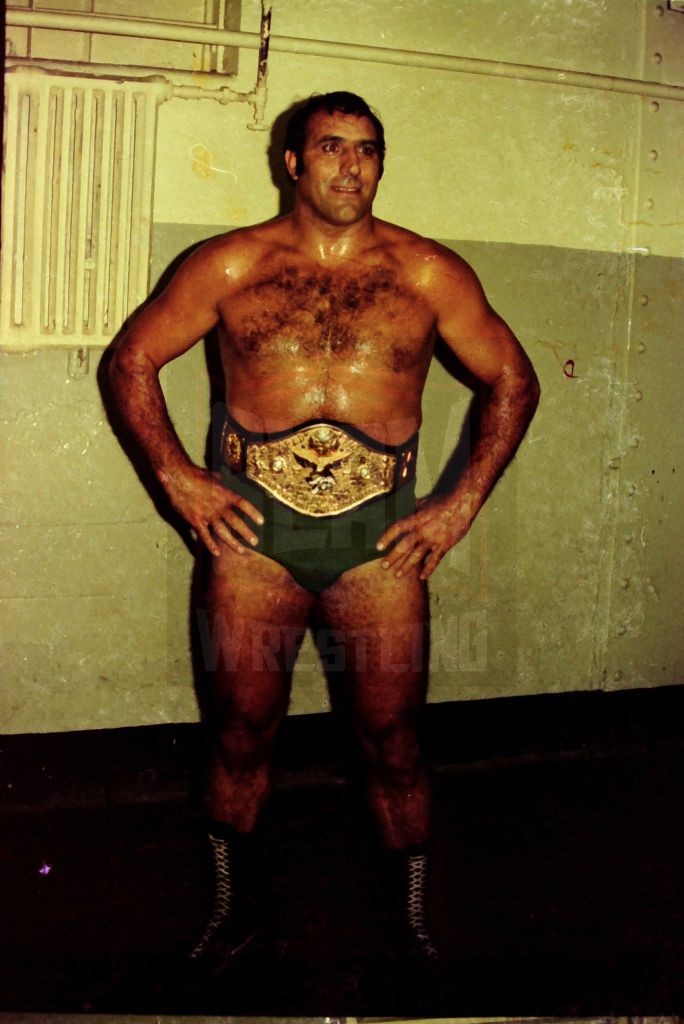 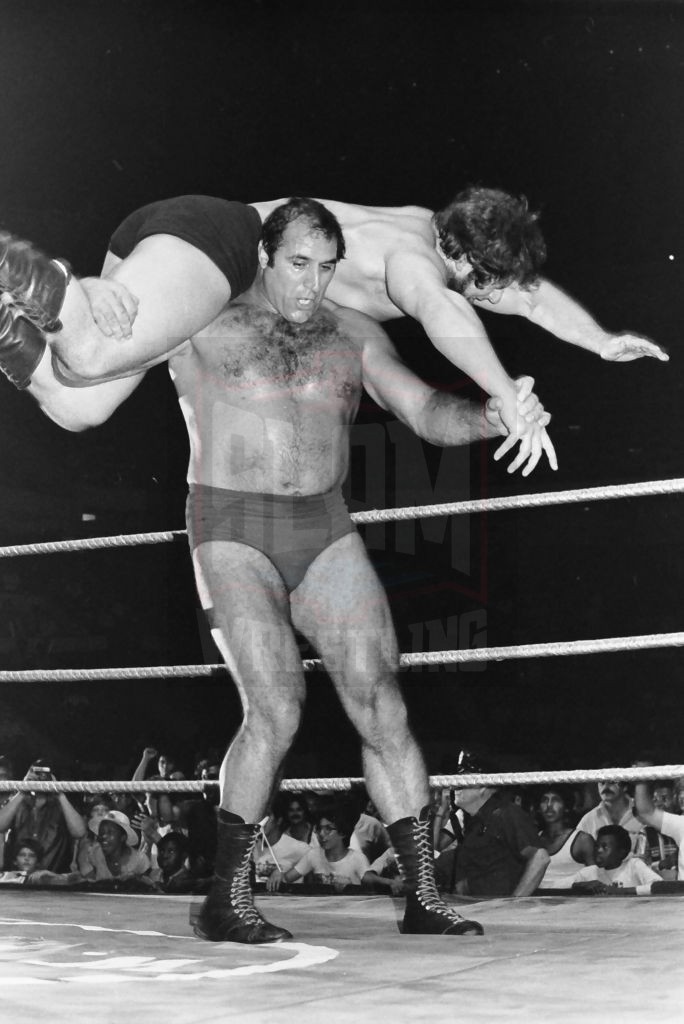 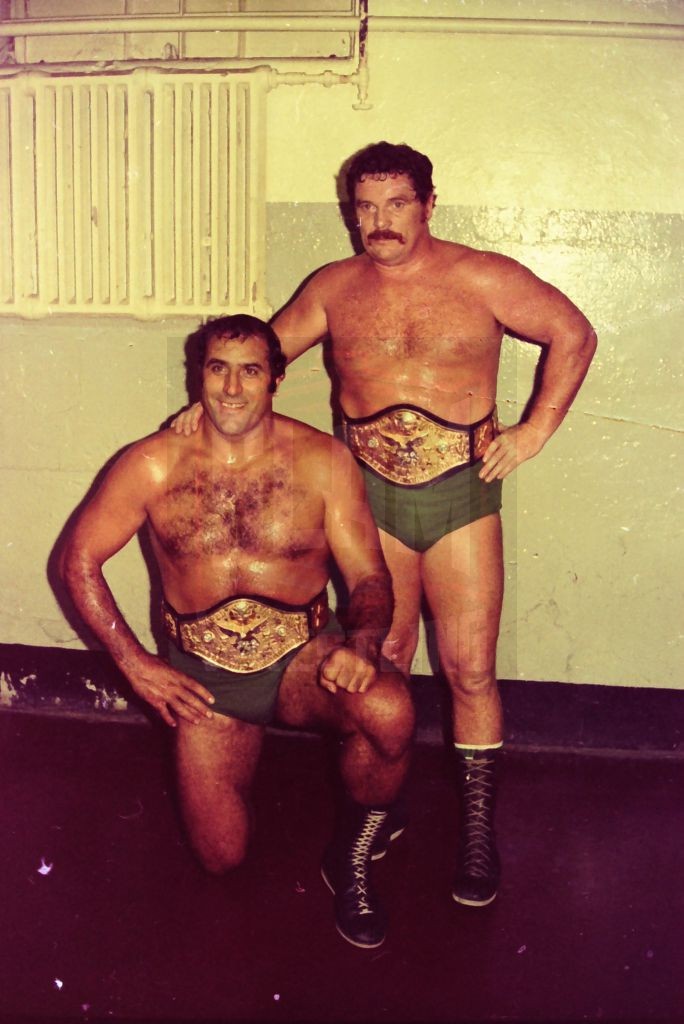 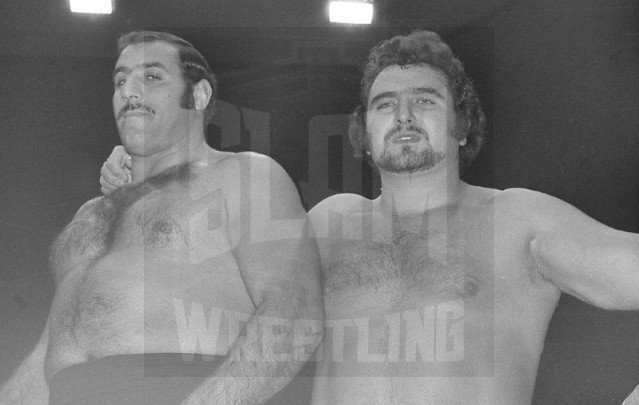 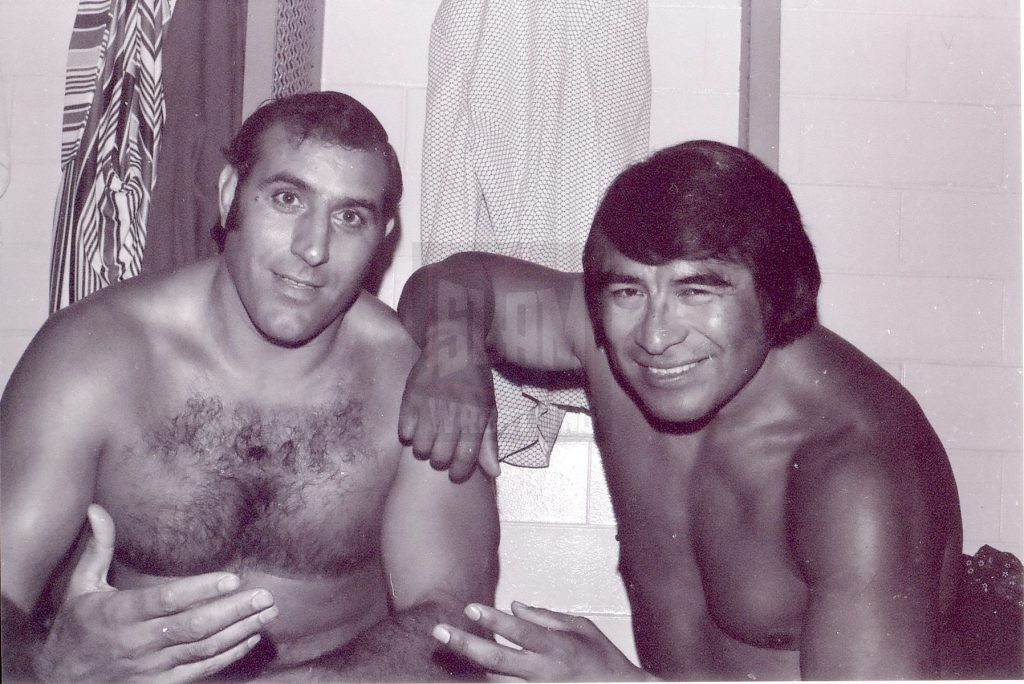 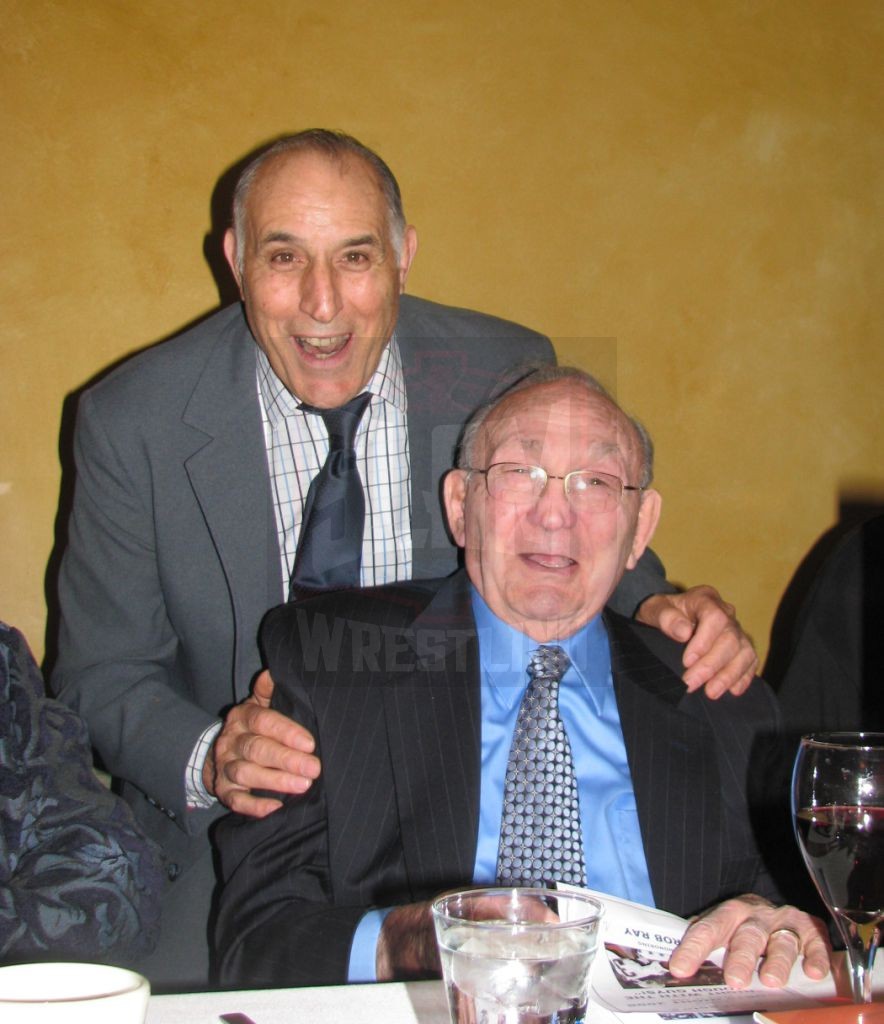 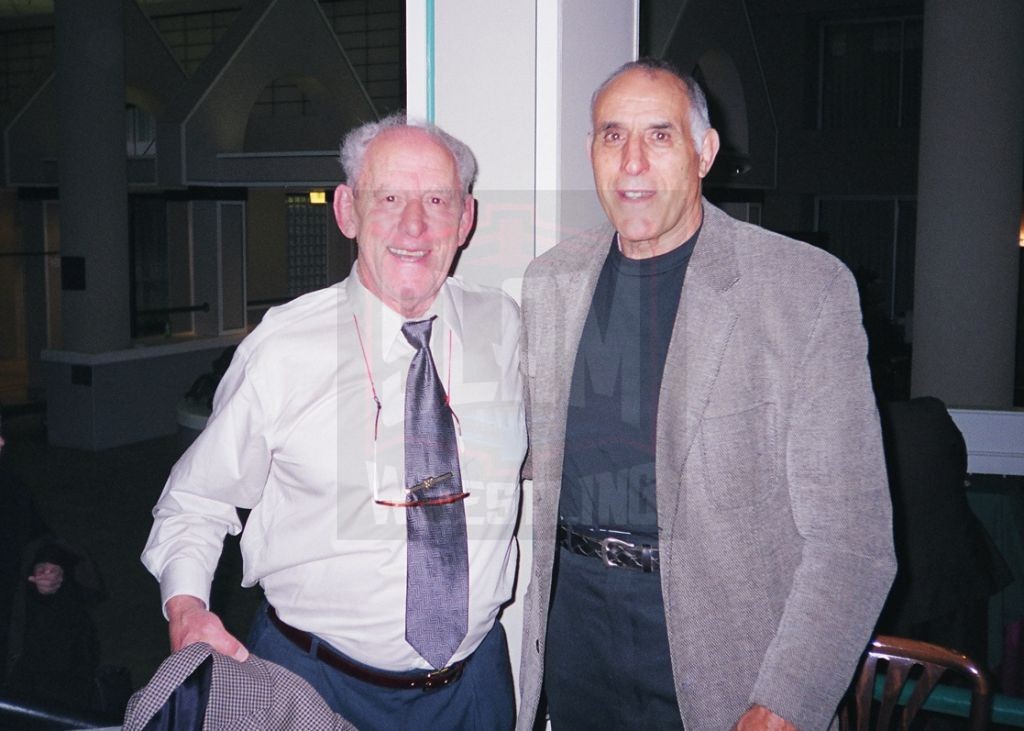 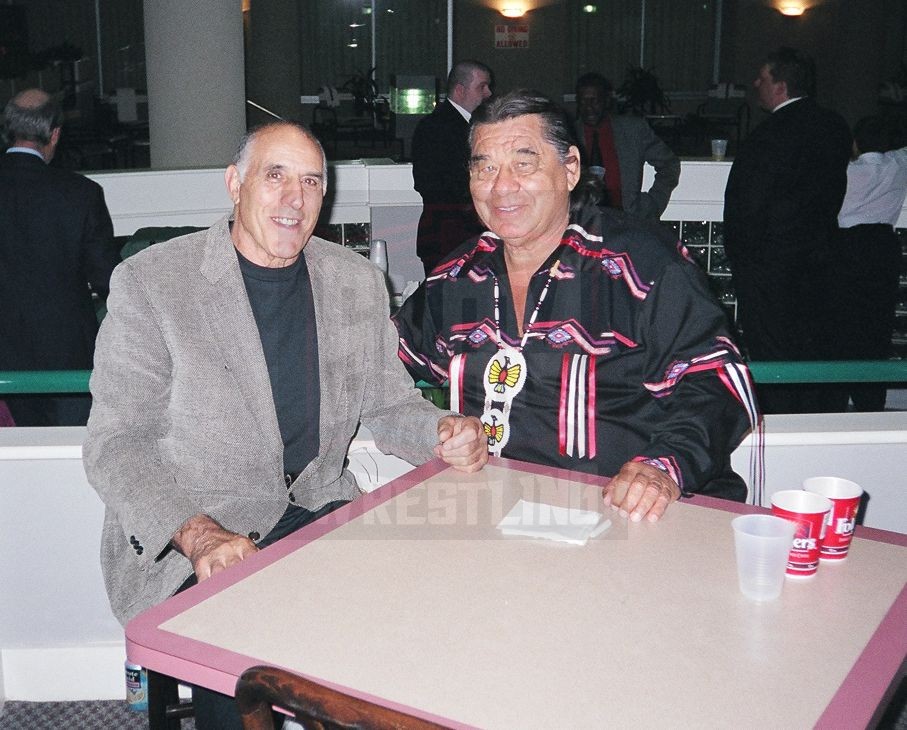 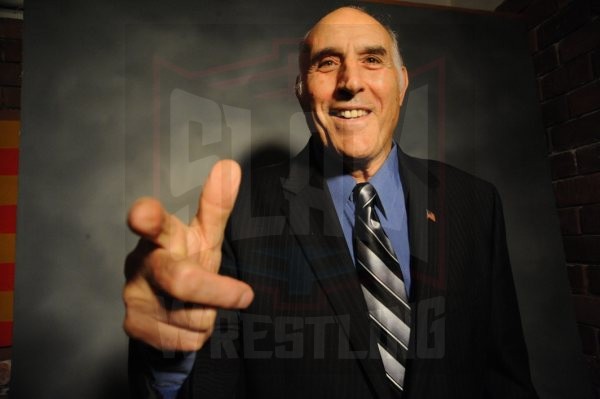