Wrestling history is full of wrestlers taking on the same names as grapplers from the past. There were two Rudy Kays, two Joyce Grables, two Stan Stasiaks, and way too many Gorgeous Georges. But perhaps none had their successful career overshadowed more than the original Dino Bravo.

And he’s okay with that.

Adolfo Bresciano, who used the name Dino Bravo in Montreal, the Carolinas, and in the WWF, had more fame in the ring — and more infamy for being executed in his home by a hail of bullets in 1993 — than Dino Bravo ever did. 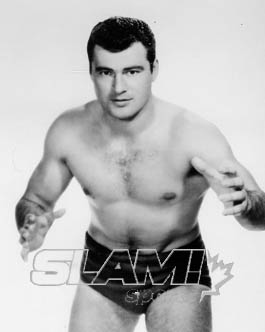 Yet in a dozen years in the ring, Bravo headlined many cards, especially tag teaming with Dominic Bravo in the late 1950s/early 1960s, who, ironically, would later partner with the other Dino Bravo here and there, when Dominic Bravo was better known under his real name of Dominic Denucci.

Today, Bravo is retired from his multi-million dollar Bravo Cement Contracting Inc., which has offices in Windsor, London, Hamilton and Mississauga, Ontario. He winters in Arizona, and is home in Windsor — when he’s not traveling to his original birthplace in northern Italy.

Bravo moved to Windsor when he was 15 years old. Having survived the trials of the Second World War, his family and friends collected money to send him to Canada, where had an uncle in business. He went to school at night to learn English, and worked construction during the day.

In the early 1950s, Bravo met one of the managers of an Italian club in Windsor, who used to work out a lot at the YMCA. He brought Bravo along for a training session. It was at the YMCA that Bravo would first encounter the men he would later face in the ring.

“I got to know the Holek brothers. Killer Kowalski used to come in once in a while,” Bravo reminisced.

Stan Holek, who worked as Stan Neilson, in particular was a big help. “We got to know each other, and other guys that were in there. He said, ‘You should get in the game.’ I said, ‘Jesus, I don’t know anybody. I don’t even know where to start.’ He said, ‘I’ll get you in touch with Burt Ruby.'”

Ruby was partners in the Detroit promotion, along with Harry Light and Jack Britton. It was an easy sell, said Bravo. “They needed an Italian wrestler, and from then on, it was history.”

Britton was actually Gabriel Acocella, also Italian, who had wrestled alongside his brother, Lou Kelly, and whose son, Gino Brito / Louis Cerdan, and grandson, Gino Brito Jr., all wrestled. In short, he knew his stuff.

Bravo was soon training with the likes of Jim Bernard (later Brute Bernard), Larry Chene, and Jim Hady. “They smartened me up after a while, but I had to take a lot of bodyslams and a lot of punches here and there,” he chuckled. “One day Harry came in and said, ‘Well, it’s about time we got you going.'”

Keeping his real name was a natural. “I always used Dino Bravo,” he said, adding that Britton told him: “Keep the name. It’s a very marketable name, Bravo. Easy to remember.”

His first match was in Windsor, against, Jack Pye. “He was an oldtimer at that time,” Bravo recalled, adding that he was victorious. “Of course, all the Italians in Windsor came out to see it!”

That Italian loyalty was always something he could rely on, whether he was working in Montreal for the Rougeaus, Missouri for Gust Karras, in Texas, or in New Mexico for Mike London.

Getting to Maple Leaf Gardens was a big thrill, and it was often like being in front of a hometown crowd. “I remember one time we worked with the Kalmikoff Brothers. We had to put them over. There were a lot of Italians in the place, so they came to help us in the ring.”

For the first while, Bravo worked on his own. “I kind of came to like the sport, traveling around. Of course, I was young at that time, and liked to travel and explore the world. Mind you, I was pretty green at that time, but you learn fast.”

His memory goes back to old colleagues, like Windsor’s Louis Papineau, who died in 1964. “The night that he died, he and I were driving together.” He started to launch into a story about hitting the town with Verne Gagne, before realizing the tale might incriminate a few people.

It was Jack Britton’s idea to pair Bravo with Denucci, since Britton knew Denucci from Montreal, where he had come over from Italy to live with family in 1955. 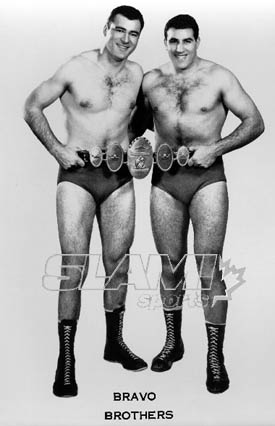 “We hit it off pretty well. They booked us mainly where the Italian ethnics were. We used to bring them in,” Bravo bragged.

Denucci agreed that it was an easy relationship. “We got along good for the whole time,” he said from his home outside Pittsburgh.

“Dino was a nice-looking guy. He was a prim donna a little bit. But besides that, he was okay,” joked Denucci. “He was tall, 6-4, or 6-5. But he didn’t like to sell. He was one of those guys who wanted to comeback all the time.”

Bravo said the duo planned a lot of moves. “Dominic was sort of the strongman. I’m 6-foot-6, and I used to carry somewhere around 245, 250. I used to do a lot of dropkicks, flying head scissors and stuff like that,” he said, defending against Denucci’s lack-of-bumps accusation. “I took my share of bumps. When you dropkick, you’ve got to fall! When you do a flying head scissors, you’ve got to fall!”

But all good pairings come to an end eventually. Denucci can remember it like it was yesterday.

“When we were in Calgary for Stu Hart, we came in in October, October the 15th. At Christmas, we were coming on a Thursday from somewhere out there, and he said, ‘Well, tonight I’m going to tell Stu’ — because Friday night was Calgary all the time — ‘that I’m going home for Christmas.’ I said, ‘Ahh, you’re not going to come back, right?’ He said, ‘No.’ I knew right away. So he told Stu, and Stu Hart, he came in to see me that night, when Dino told him, and he said, ‘Dino is going to go home for Christmas, and he’s not going to come back.’ I said, ‘Well, I guess I have to go too.’ He said, ‘No, no, no. You stay here and I’ll raise your payoffs and I’ll put you in a main event, tag team, with Ronnie Etchison.'” Denucci would stay until April.

Bravo didn’t dispute Denucci’s recollection. “I’d just gotten back from England. I’d spent a couple of years there. I was tired of the road, too. When we worked in Alberta, we used to do a lot of traveling in those days. You didn’t have the opportunity to fly like they do today.”

As well, Bravo had just gotten married. “She was on my back. ‘You’re always away, and I’m always home by myself. What kind of life is this?'”

They both had a couple of “what if?” moments shortly thereafter.

“In fact, we were on our way to Australia, Dominic and I. We had a signed contract to go over there. Then I quit in Calgary,” said Bravo. Denucci became a big star in Australia. “After three, four months, [promoter] Jim Barnett called me up and said, ‘Dominic is kind of burning out because he’s by himself. We need a novelty here. We need you to come down.’ He offered me big bucks to go down, but I’d already started in business. I thought about it for a couple of days, then I called him back, and I told him I can’t make it.”

From his perch running Bravo Cement, Bravo offered his partner a chance to get off the road. Denucci was off to California, and he offered Denucci a job when he came back. Dom remembered talking about his six or seven years spent as an amateur, and was anticipating more professional success. “No, I did all this work. I’m going to try and see what’s happening,” he replied.

Bravo’s uncle had had enough, and was ready to retire, handing the reigns over to his nephew.

“Whatever was made was through my hard work,” Bravo said of the growth of the cement company. “You get out of business what you put in. You work hard, you get results. You sit on your ass, you get nothing.”

His wrestling career wasn’t quite done, however. Bravo would work in his business during the day, and wrestled and refereed for Burt Ruby and Harry Light, in Michigan, Ohio, Indiana, Ontario — any place he could go in a day, three or four times a week. That faded by 1965 or so. “I missed it a lot at the beginning, but I was so preoccupied with business that I didn’t have enough time to think about it.”

Today, Bravo is still involved as an advisor, but has sold the business to his son, Paul. He also has a daughter, Linda, with wife Elda.

The wrestling connections helped “very much,” and it opened many doors. Even today, he gets recognized here or there, and not just because his credit card references that “other” Dino Bravo.

It turns out back in 1972, Jack Britton did ask permission to bestow the Dino Bravo handle on Adolfo Bresciano, a Montreal protégé of his.

“I said, ‘Yeah, go ahead.’ See, I made it easy for the dirty bugger because Bravo, the name was known, especially with the team Bravo Brothers. That opened the doors for him easily. He didn’t have to go through the hard times like I did to get myself established. Anyway, Jack Britton asked me, and I said, ‘Yeah, go ahead.’ I knew I was out of it.”

Because Bravo kept up friendships with the likes of Crybaby George Cannon, who promoted WWF shows in the 1980s in Detroit, he did get to meet Bresciano, once.

At the conclusion of the conversation, Bravo seemed genuinely pleased to talk about old times. He had lost touch with old friends, like Denucci (a problem since remedied).

But for a guy who did so much, both in wrestling and in business, he’s not a braggart. “I’m the type of guy, I’m not a glory hound.”