The untold story of Louis Papineau

Throughout the rich history of professional wrestling there are a thousand stories that have never been told. The story of Louis Papineau, professional wrestler, is one such story that never made it to the front pages of major newspapers. But it is a story worth telling and a life and career worth remembering. 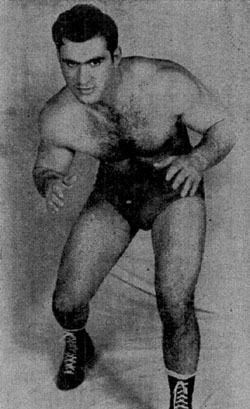 Papineau was born in Windsor, Ontario in 1928 and grew up in a family of seven boys and one girl. Along with his brothers he excelled in hockey and baseball. He was a good enough hockey player to gain a tryout with the Windsor Spitfires junior A team when he was 17, but unfortunately he never made the grade.

His love for the rink gradually diminished and Louis found a new passion in the ring. He had been wrestling amateur since the age of 16 when he decided to try his hand (or fists) at boxing. He had his first bout at the Windsor Market but when his father discovered his son had embarked on a pugilistic career, he forbade him to continue as a boxer. Fortunately, he allowed young Louis to continue wrestling.

Promoter Bert Ruby was impressed with Papineau’s dedication to training and his skill in the ring and signed him for his circuit in Michigan and southern Ontario. A lot of the local boys were holding down steady jobs and wrestling part time. Future stars such as Lou Klein, Larry Chene, Laddie and Stan Holek, Johnny Gates and Walter Kowalski, known as Wladek back then, were all on the scene. Kowalski lived in the same neighborhood as the Papineaus.

Louis worked at a plant that made radiators for cars while wrestling on the side. Satisfied that he could make a career in the pros, he quit his job and began traveling to various towns.

For the next 17 years he gained the respect and admiration of his peers and promoters as well as thousands of wrestling fans on the North American circuits. There were very few territories that he didn’t work. What was unique and versatile about Papineau was the fact that he wrestled under many different names and identities.

In Montreal, he used three different names — Lou Trompe, The Sheik and his own.

“He got the name Lou Trompe from the fact he liked playing cards and of course trump was a common word in some card games,” explained his brother, Richard Papineau. “He enjoyed playing euchre, hearts, and cribbage and would always play to win. But win or lose it was quickly forgotten until the next time.” 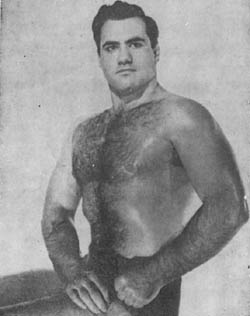 Louis worked as The Sheik only in and around Montreal but not at the same time that the gimmick was used by Ed Farhat, his brother further explained. Papineau also wrestled as The Bearded Terror around Windsor and the southern States for about a year and a half.

But it was as Leaping Louis Papineau that he made his reputation and gained a loyal following among fans. He was an athletic type, light on his feet and very skilled at flying maneuvers such as dropkicks and head scissors. He is remembered as very intense in the ring with a high level of ability to sell for his opponent or put someone over. He had a canny knack to take a terrible beating at the hands of villains such as Paul Vachon or Dory Funk Sr. and then stage a miraculous comeback while whipping the crowd into a frenzied state.

To promoter Bert Ruby, he was a trouper and a reliable headliner, proficient and catlike.

Young Gino Brito was starting out in the game when top junior heavyweights such as Papineau, Chene and Rocco Columbo were breaking new ground.

“These guys were doing things back then that wrestlers are doing today,” recalled Brito recently. “They were high flyers, doing risky aerial moves and acrobatic stuff, landing on tables and chairs. They were paying a price for it with their bodies.”

Papineau had a long association with Larry Kasaboski and Northland Wrestling Enterprises where he was a major star for most of his career. He faced the best the promotion brought in, including Don Evans, Professor Roy Shire, Tommy Martindale, Leo Wallick and Sandy Scott.

As popular as he was on Kasaboski’s circuit, he was equally in demand in other areas. In Portland and Idaho and in Vancouver and parts of California, he worked under the name of Gino Nicolini and was recognized as the Junior Heavyweight Champion. 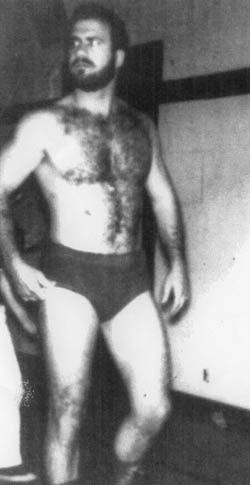 Papineau as The Bearded Terror.

“Louis had a lot of friends in the business,” noted Richard Papineau. “He was close to Kasaboski, Bill Curry, Herb Parks and Frankie Hart up north. And around Windsor he numbered Bert Ruby and the Holeks and Johnny Gates as friends.”

Other contemporaries he admired were Jack Britton, Columbo and Cry Baby McArthur.

But it was perhaps with Red Donovan, who was another close friend, that Louis’ career took a different direction. The pair formed a strong tag team, wearing masks and dressed as devils with capes. Louis became Mephisto and Donovan was Dante. The duo worked in Tennessee, Georgia, Alabama and Texas and was a formidable team facing the likes of Lou Thesz and Lester Welch. Louis had once wrestled Thesz in a singles match and had also faced Verne Gagne. 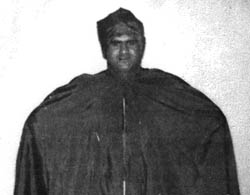 Papineau as The Sheik.

Even though he was not known as a hunter or fisherman, his love for Northern Ontario was quite evident as he returned each year. In fact, he married a Sudbury girl named Justine. Louis was a family man and he and “Tina” had one daughter Linda, now the chief nursing officer at a Los Angeles hospital.

When not working, he enjoyed listening to country and western and old time fiddling music. He taught himself how to play his father’s fiddle that was given to him by his mother after his dad died.

Multi-talented in sports, Louis took up 10-pin bowling to kill time while on the road. In his free time he was constantly at a bowling alley perfecting his game. He had an average close to 218 and would bowl in pro and amateur tournaments picking up prize money.

Always looking for a new challenge, Louis and his brother Richard once bowled 40 consecutive games non stop in a Windsor bowling alley. Quite a crowd gathered to watch the Papineau boys complete the marathon from 10 am to 6 pm without stopping, such was their endurance.

It was that competitive edge that drove Louis to excel at everything he tried.

By the mid-1960s he was winding down his wrestling career. He was road weary and wanted to spend more time with his family and as he put it “live like a human being.” He asked promoter Ruby to book him a couple of nights a week around Detroit. 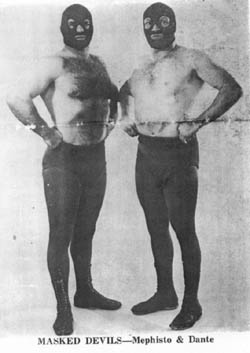 On one such booking, on a Saturday evening on March 7, 1964, Louis wrestled Gino Brito in a benefit match in Garden City, Michigan. After the bout, he returned to the dressing room and within 10 minutes had fallen to one knee. He yelled to Bert Ruby for help and medical assistance arrived shortly.

He was given an injection and mouth-to-mouth resuscitation by a doctor. The fire department also worked on him for 30 minutes with a resuscitator without success. Sister Lenore Gibb, a Catholic nun and family friend, recalled that several fans ran to a neighboring church for a priest to perform the last rites. 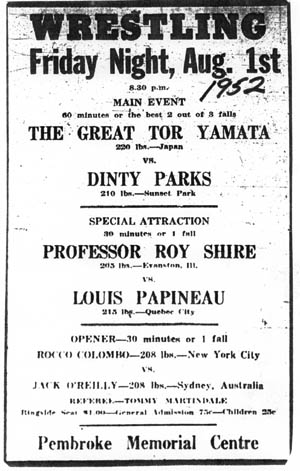 A massive heart attack had pinned Papineau for the three count, a feat that many opponents had failed to do for 17 years.

His death shocked his family and the wrestling world but none more so than his friend Larry Kasaboski. The northern promoter had just learned the day before that their mutual friend, Rocco Columbo had died in a Seattle hotel room at the age of 34. The trio had been together as a big part of the Northern Ontario wrestling scene for over a decade. Later that same year, Larry Chene died in a highway accident and suddenly the game had lost three of its most energetic performers.

Although quite young at the time, Papineau’s daughter Linda has retained an indelible memory of her dad through childhood flashbacks and stories from her mother and relatives.

“He was quite a character,” muses Linda, “funny and quirky, a little ahead of his time I think, always seeing the funny side of life. My mother and he met at the arena in Sudbury after one of his matches. I am told they were almost inseparable after that first encounter.”

Linda experienced a “normal” childhood like the offspring of many wrestlers, traveling with parents throughout North America.

“I was ‘born in a trunk’ as they say,” she reflects today, referring to the nomadic lifestyle of a wrestling family. The young Papineau family traveled throughout Northern Ontario, Tennessee, North Carolina and Oklahoma among other places.

At 36, Papineau accomplished much more than the average person experiences in a lifetime. His was a life well lived. His was a career both honourable and respected and well worth remembering.