When WWE puts out a biographical DVD set, odds are it’s either outstanding or disappointing. In the case of John Cena: My Life, a follow-up to Word Life, this three-disc compilation released late in 2007 is a decent documentary, but is severely lacking on in-ring action. 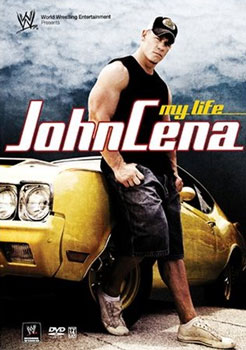 Like most celebrities, Cena lives a lavish life and has much in the way of material goods. His extensive car collection is featured on this DVD and, to the average fan, it almost makes you feel as though the one or two cars they own and have worked hard for mean little compared to Cena’s cavalcade. That’s not to say that Cena hasn’t earned everything he has, however. In fact, his car stash is quite astonishing. He obviously doesn’t have kids.

Cena talks about growing up in the Boston suburb of West Newbury and getting his start in the wrestling world. When he speaks, you can detect a hint of humble pie. Whether or not it’s genuine doesn’t matter, but Cena seems to feel lucky and blessed that he is where he is today.

This compilation does have some of Cena’s matches and this is probably a highlight of the set. From his debut match on Smackdown in 2002 against Kurt Angle to his pay-per-view debut against Chris Jericho at the 2002 Vengeance show to his first use of the FU against Rikishi, it’s all good stuff. His match in Ohio Valley Wrestling in 2002 when (as The Prototype) he beat Randy Orton in Orton’s OVW farewell match is a feature that is a rare treat.

Prior to each match, Cena discusses the match and what was happening at that point in his time with WWE. When talking Orton, Cena asks if anyone would have thought he and Orton would go from OVW obscurity to the top of the WWE. Again, this seems to humble Cena.

There is a lot of footage of Cena at home where he shows off his dozen cars and his collection of military coins. He says he collects for sentimental value and not so much for the monetary rewards. Some extras on this set include a match for OVW when he was WWE champion, two college friends talking about a camping trip they had with Cena, the music video for Cena’s song “Right Now” from his CD and interviews and promos on Kevin Federline, his WrestleMania 22 entrance and his participation in the Gillette Young Guns Celebrity Race.

The main documentary portion of the DVD is on the first disc when Cena talks about growing up in West Newbury, Mass., OVW, his spinner belts, JBL, Edge, weight training, his movie The Marine and looking ahead to what’s next in his career.

Disc 3 is a compilation of all the “5 Questions with the Champ” features from WWE.com from April-December 2006. Just more of Cena being candid and staying with kayfabe.

All in all, this is another in a long line of bio DVDs WWE has produced and for the most part, it’s a keeper and has some good moments. But being that Cena is either the most beloved wrestler in the company or the most hated, it’s actually pretty cool to go out of the ring with Cena and see how he grew up and to see him talk humbly about all of his success.

That said, this reviewer would have liked to see more matches, perhaps from OVW, but being that Cena has only been in WWE six years, a future DVD could have more of his title matches and big-time bouts from 2006 to whenever the next DVD is released. But on a scale from 1-10, My Life gets a solid 7-1/2 stars – definitely worth the dough.

Back in high school in suburban Detroit, Matt Mackinder took on a white rapper persona, too. He also wants to note that he received this Cena DVD set from his in-laws last Christmas.