Oliver John ‘Old School’ and proud of it

“Old School” Oliver John has been around the California independent wrestling scene long enough now — since 1989, in fact — that he can afford to be selective about who he works for.

“I’ve scaled it back, I’m a little more choosy,” he recently told SLAM! Wrestling. His main two gigs at the moment are the NWA-affiliated Pro Wrestling Revolution and All-Pro Wrestling. 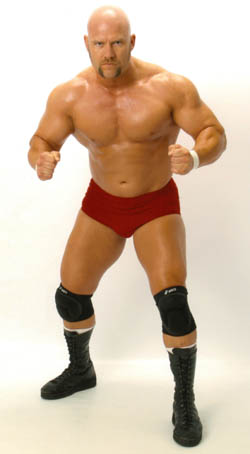 And the “Old School” nickname refers to more than just his training with oldtimer Paul DeMarco.

“I started using that in San Diego because a lot of guys had come in, and they see how I teach, and they’d go, ‘Man, that’s old school,'” John said. “I’d keep hearing, ‘You’re old school, you’re old school.’ So I just went with ‘Old School’ Oliver John.”

Backstage, he is a leader. “Oliver John means that I have a general in my locker room. He is somebody that all the boys listen to and respect,” said Gabriel Ramirez of Pro Wrestling Revolution. “He understands what a show needs and knows that sometimes a wrestling match is not meant for him to try to display all his abilities but he wrestles for the sake of the crowd. He knows how to read a crowd and can change his game to go along with they are into that night. He wrestles smart and has the ability to work for the sake of the show, crowd… and not his personal likings. Every promotion needs a leader in the ring and out, and he is all that for me and Pro Wrestling Revolution.”

For someone who commands so much respect locally, however, Oliver John is hardly a well-known national name. He just returned from a tour in Portugal, and he’s done trips to Japan for Zero-One and HUSTLE, including working his favourite match ever, against Shinya Hashimoto. “That was a big deal, that was, wow. He came out to the ring, and their reaction to him — it was a small town we were in, but that was pretty amazing,” John recalled of the late Japanese star. “Especially how stiff I thought his kicks and chops would be, but they were so light, I was amazed at how he did that. It was incredible.”

In the United States, he was a part of the short-lived recent re-birth of Portland Wrestling on television — including a run as the promotion’s Northwest champion, but it was his match with Go Shiozaki at the Cauliflower Alley Club reunion in June that has meant newfound attention for a decided veteran.

John got some feedback from the legends in attendance, including Shiozaki’s American trainer, Harley Race. 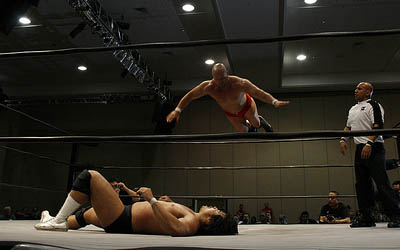 Oliver John launches himself onto Go Shiozaki during their match in June.

“Harley had really encouraging words for me, to follow up with stuff. That’s what I’m going to do,” said John. “It was definitely good, talking with Pat Patterson, it definitely opened up doors. Going to Cauliflower, even last year it opened up doors for me. It’s continued. Anybody who’s doing this, especially at the indy level, to not go to Cauliflower, it’s pretty crazy. I wish I would have done it 10 years ago.”

And unlike a lot of indy talent competing today, Oliver John Steinwandt can say that he could have done it 10 years ago.

He recalled his chance meeting with DeMarco. “I was a competitive powerlifter as a teenager. I had a Road Warriors shirt on at the gym, and he was coming out, he was leaving the gym and I was getting done with the meet. He said, ‘Hey, I know those guys on your shirt.'” They started talking, and it grew in a few years to a true friendship. “Finally, in ’94, we opened up a school together. That’s when I formally started training in a ring.”

DeMarco’s training sounds even more “old school” today, with a plethora of schools running by wrestlers who hardly made a dent in the business. 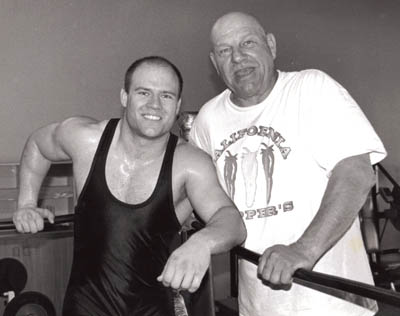 “He kept it pretty simple, different than any of the schools that I’ve gone to, I’ve taught for. Very little drilling,” said John. “He would teach you how to take a back bump, bump, bump, teach you a hold. Then what he would do — he could still move back then, he had bad back problems, but it wasn’t too serious at the time. He would get in, lock up with you, and waltz you around and just talk to you and direct you like you were having a match. That’s how he liked to do it. He’d pair two guys and say, ‘Okay, you guys are always going to wrestle each other. You’re going to learn one match. From that one match, once you have one match down, then you can start doing some different things.’ He taught totally different than anybody else that I’ve worked with. He wasn’t big on the drills.”

DeMarco also had a definite opinion on cardiovascular training. “You can do the cardio on your own,” DeMarco told his students, with the goal to have a one-hour match in mind.

John and DeMarco ran a school together for a while, with the goal to eventually run shows, but it just never worked out. The lease on the building was up and John found himself more and more interested in the burgeoning field of mixed-martial arts.

“I was doing a show, we were the extra talent for a mixed martial arts show,” explaned John. “It ended up, me and this other guy out of our gym, we ended up kind of stealing the show. We did a work-shoot kind of thing, and did the pro wrestling spot at the end that got over really well.”

Ken Shamrock’s father, Bob, was in attendance and invited John to work out with the Shamrock 2000 team. “I did that for a couple of years, then injured my eye,” he said. “I laid low for a while because I wasn’t sure what I wanted to do with my eye situation. Once I had surgery to correct the problem, that was in 2001, and Bob was down in San Diego at Ken’s Lion’s Den. I went down there and interviewed, and took over the pro wrestling program over there. That’s when I met Rick Bassman, and it’s through Bassman that I ended up going over to Zero-One, and I did HUSTLE, and got a couple of tryouts with WWE.” 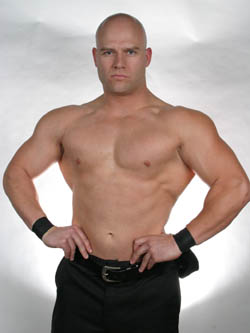 Bob Shamrock has nothing but good things to say about John. “He’s a fantastic individual,” said Shamrock, who shared a house with John and some of the trainees for the Lion’s Den in San Diego. “He’s a good teacher. He practices what he preaches. In other words, if he asks you to do something, he’ll do the same thing. He’s dedicated to what he does. He stays in good shape. He’s got a lot of exuberance about him. He’s the kind of guy you want to be around. He’s the kind of guy you enjoy working with because he’s a go-getter. He’s got the kind of personality that he’s fun to be with, he jokes. If you don’t understand something that he’s trying to show you, he’s willing to explain and go over it a dozen times.”

His mother’s health problems derailed another promising effort, but by 2004, Oliver John was back as a regular pro wrestling, a well-known weekend warrior with a day job as a carpenter. He’s also worked as a personal trainer, and tried out for the California Highway Patrol.

Revolution’s Ramirez addressed John’s plusses. “I believe his strengths are that he knows what he can and can’t do in the ring. He knows what his abilities are and doesn’t try to stray from them. In an era where wrestlers feel they have to re-invent the wheel, he maintains what it needs to be. As a person, he loves to teach the younger kids and tries to share his passion with others and hopefully help them in their efforts as wrestlers.”

He is realistic about what he can still do at a relatively advanced age of 35.

“As long as I’m in shape and my body can hold out, I’m with it,” John said. “When the body tells me, ‘Hey, you’re done,’ then I’ll decide then. I still have a good few years that I can keep going and seeing if I can get this to be a full-time job instead of just working indies on the weekend.”