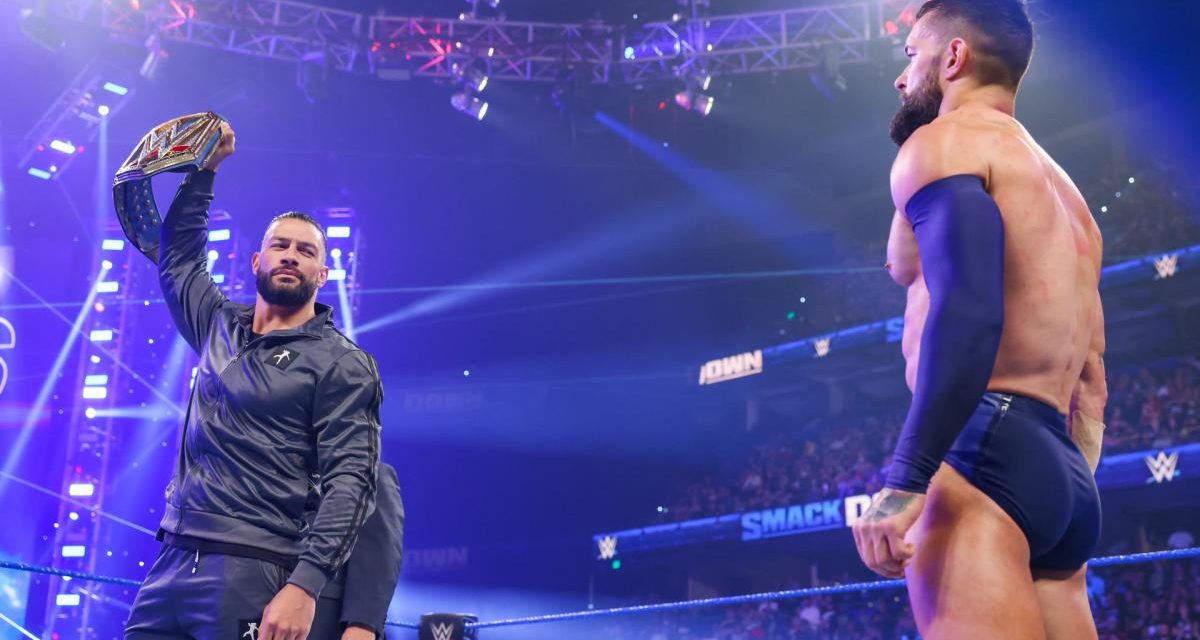 With an announced championship match that is later revoked and lots of short matches, you’d be forgiven for confusing this episode of SmackDown with a showing of Main Event.

I’ve missed a lot of things with Sasha Banks being gone — but not Michael Cole shouting out “It’s Boss Time!” like it’s the first time he’s ever thought of it. As she struts to the ring, her info card reminds viewers that she “shockingly attacked Bianca Belair last week on SmackDown”, which I presume is sarcasm.

Banks unsurprisingly continues to run down Belair, insisting that the current SmackDown Women’s Champion would be nothing without her. Belair listens from backstage for a while, but eventually heads to the ring to insist that the opposite just might be true. As the two verbally jab at each other, with Belair challenging Banks to a rematch at SummerSlam, Zelina Vega angrily interrupts.

She reminds the champ that she was promised a title match, so Belair says that will happen tonight. Cole excitedly announces the match between Banks and Belair as on the card tonight, but thankfully Pat McAfee is around to help his partner out and corrects him before wrestling fans fall into confusion.

Rey and Dominik Mysterio discuss their upcoming title shot against the Usos at SummerSlam, with Rey letting his son know in no uncertain terms how much he wants the tag titles back.

You know it’s dynamic booking when I just have to swap the names in the heading above from last week’s match. Dominik, wearing what looks to be a partner outfit to Nikki A.S.H.’s super-hero gear, lands a hard forearm against Jey before sending him flying with a springboard arm drag. Jey gains control with a very basic but solid body slam, followed by a hard punch that sends Dominik reeling to the floor.

We get a look at what went on in the commercial break (brought to you by the upcoming 2K22 game, now featuring several fewer NXT superstars), where Jimmy landed a cheap shot on Dominik, allowing Jey to gain control. A neckbreaker nets Jey a two-count, but Dominik repays the favour with a neckbreaker and two-count of his own. A kind of missed dive leaves Jey hung up on the second rope, allowing Dominik to deliver his slow-mo 619. 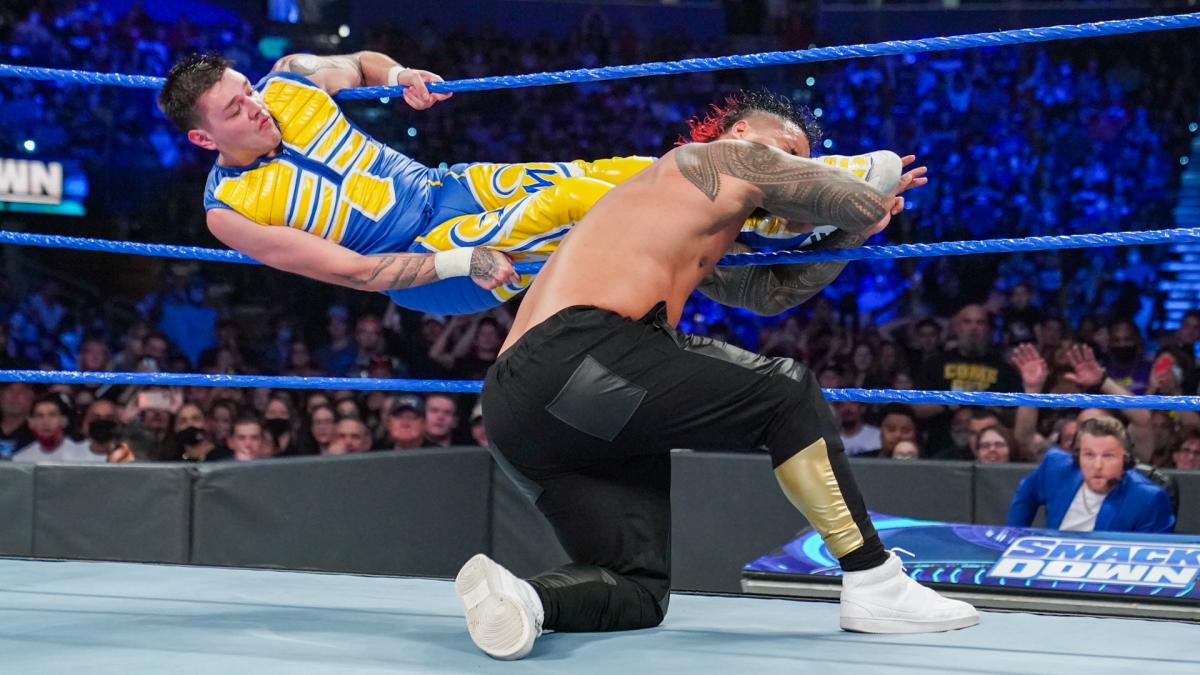 He can’t capitalize, though, and Jey responds with a superkick and top-rope splash for the win.

Edge is lurking backstage and has hopes to meet Seth Rollins in the ring tonight — just to talk out their problems, I’m sure.

Even if I review a hundred of these Contender’s Matches, I’ll say every time how annoyingly dumb they are. Beat the champ and you get … a shot at beating the champ.

Before the match begins, Cole takes a moment to congratulate both The Rock and John Cena for their successes in Hollywood, with both Jungle Cruise and The Suicide Squad doing great business.

A quick start to this match has Apollo dodging kicks and shoulder-blocking Nakamura to the ground — but I have to interrupt to point out the next level of absurdity of this stipulation match. McAfee announces that he has been informed that Nakamura will “1000%” be in contention for a title opportunity if he wins this match.

So, it’s actually: beat the champ, and you may get a shot at beating the champ.

Nakamura is rendered dizzy after being dropped neck-first on the top rope, then Crews knocks him down hard with a clothesline. As McAfee keeps pushing the company line by telling us that all of Nigeria is proud of Crews, Nakamura lands several knees and kicks before trying a pinfall, but Azeez pulls Nakamura to the floor and ends the match.

Kayla Braxton waits outside of Roman Reigns’ dressing room, hoping for a comment, but instead she gets Paul Heyman. Heyman speaks at length without a pause to derail the crowd’s “What?” chant (nicely done), before quite rightly pointing out that Cena signing in Finn Balor’s place for the title match at SummerSlam is absurd and invalid.

As Heyman slinks back into the dressing room, he spots Big E Langston, who is showing off his Money in the Bank contract and giggling a little insanely.

Earlier tonight, we saw a graphic announcing the Women’s Championship match between Belair and Vega. It has been changed to a — sigh — Championship Contender’s Match.

Nox tries to hit and run, but Tamina predictably overpowers her early. Still, a series of dropkicks catch up with Tamina eventually, bringing her to a knee. Nox misses a Shining Wizard and takes a superkick instead. As Tamina hoists Nox up for a Samoan Drop, Blackheart fires a pellet from her tank, distracting Tamina and allowing Nox to fold her up for the win. 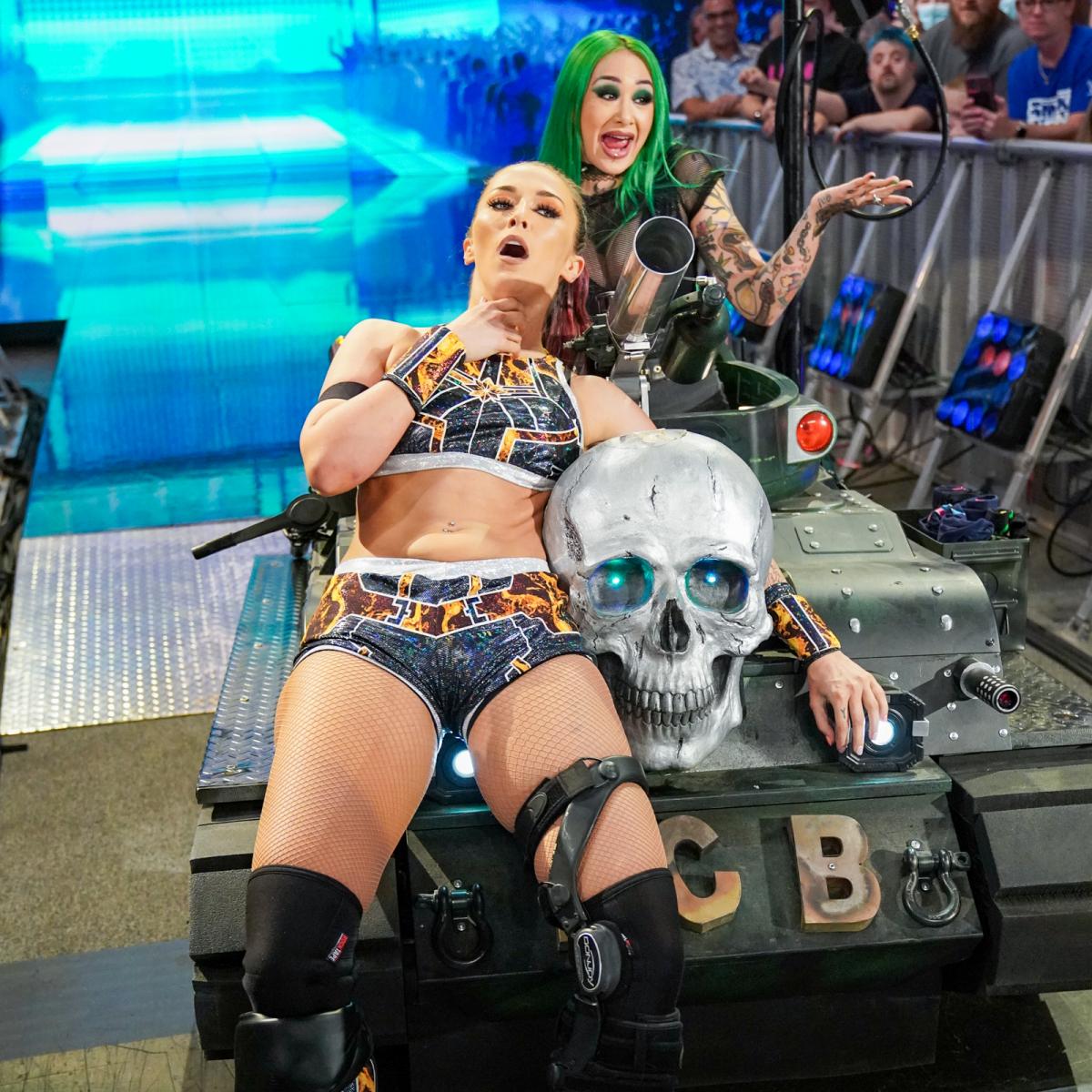 As Nox seems to appreciate her lucky win, Blackheart employs the classic “Did I do that?” defense. Photo: WWE

Adam Pearce and Sonya Deville are backstage, apparently impressed by Nox’s cheeky victory, when Zelina Vega saunters in ready for her title fight. Pearce retcons decades of WWE TV programming by explaining that they couldn’t pull off a championship match tonight without any promotion. Deville doubles down by saying that Belair doesn’t make matches around here: she does. Pearce tells her that if she can beat Belair, then she’ll get her chance at the title. Inside, they’re all crying over having to schill this nonsense.

It’s Edge’s turn to talk, and he’s out in the ring announcing that it’s a good thing Seth Rollins isn’t here tonight, or he’d end up in jail after what he would have undoubtedly done to him. Rollins appears on the screen “Via Satellite”, claiming that he and Edge are a lot alike, but that’s where the similarity ends. That probably sounded better in his head before he said it. 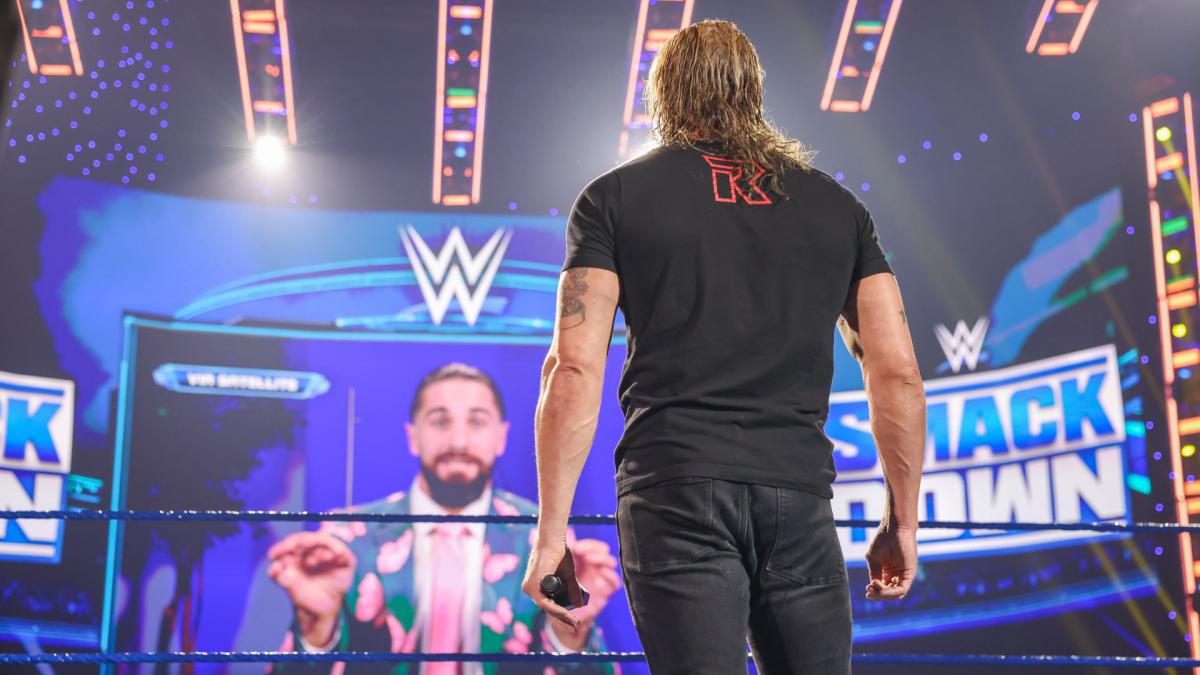 Cutting to the chase, Edge challenges Rollins to a match at SummerSlam. Rollins plays coy until Edge calls him “Edge Light”, which is a bridge too far for the former architectural messiah. Rollins accepts, and Michael Cole says “let’s make that official”. So, Cole can make a match, but not Belair?

Speaking of nonsense, we cut to Kayla Braxton who has Finn Balor ready to vent his frustrations. For tonight, Balor’s focus is on Baron Corbin, but he has issues with John Cena ready to go as well.

Roode and Ford start things off, with Ford doing somersaults while Roode proves that a kick to the gut and a chokeslam is much more effective. Roode admonishes Ford for even coming back to action, but Ford responds with an enzuigiri and a tag to Dawkins. A spinning neckbreaker brings Ziggler down, but after a little free-for-all Ziggler lands a Famouser for two.

Dawkins recovers and plants Ziggler with a body slam, tagging in Ford for a big splash for the win.

Yes, this stipulation is still dumb. Belair begins by tossing Vega around, but Vega dodges a corner attack and responds with double knees (I’ve pointed this out before, too, but “double knees” would be four knees, right?). Belair hoists Vega up with ease again, but Vega directs the champ towards the ropes and slips onto the apron, where Belair pushes her to the floor.

Banks makes an entrance, letting Vega land a hurricanrana onto Belair on the floor. After a break (from which point on Banks is gone again), McAfee gushes over the “unbelievable strength” of Belair after picking Vega up. It is definitely believable. Vega looks for an octopus submission, but Belair repositions her for a suplex. The fight goes to the floor again as Belair catches a second hurricanrana and swings Vega violently head-first into the barricade. 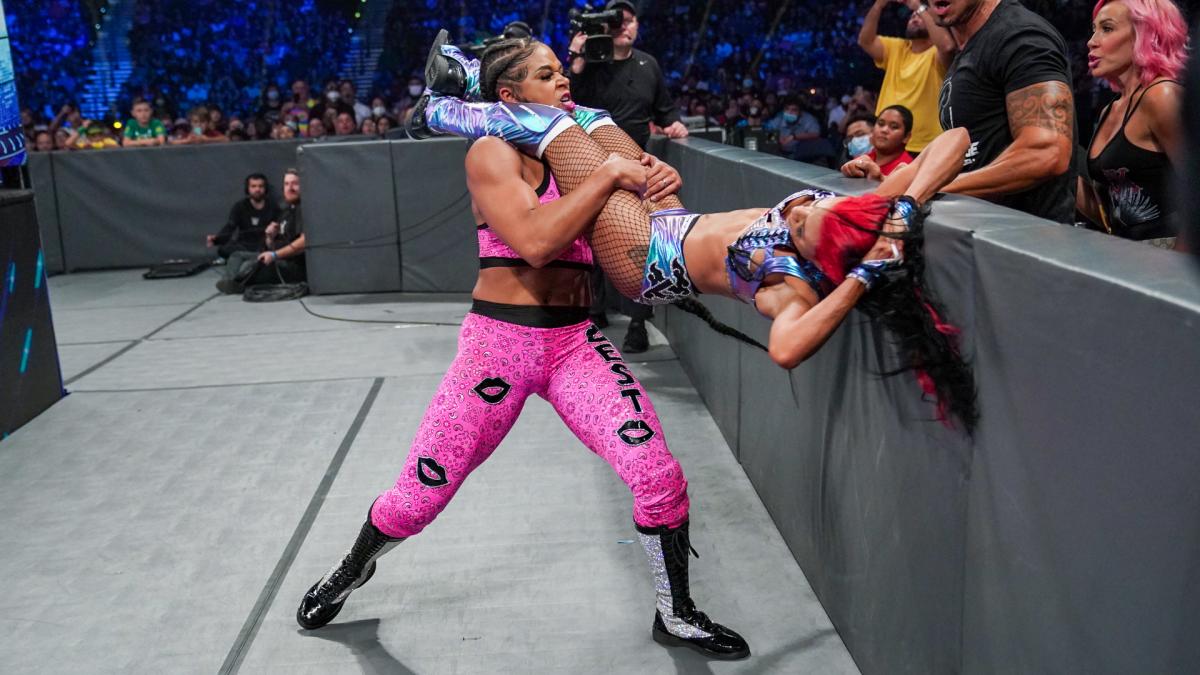 Vega takes one for the team in this spot. Photo: WWE

From there, the champ brings Vega back into the ring for a K.O.D. and victory.

Before the match starts, Reigns, in his secluded office, tells Heyman that he’s interested in this match.

You know what: Baron Corbin takes what he’s given and gives it everything. He stumbles out towards the ring, and as soon as the bell rings he asks for a mic, apologizes to Balor, who refuses the apology and starts his attack.

Corbin defends himself, running Balor’s face into the top turnbuckle and seems to be in control before a Pele Kick from Balor leads to a stomp on the former king’s chest, again and again. It’s not long before a Coup de Grace makes quick work of Corbin.

Balor grabs a mic and says he wants Roman Reigns, and he’ll go through John Cena to get to him. Reigns’ cool music hits and he comes out, looking as usual like he just wrapped up running a soccer practice. We get a commercial break before Reigns is finally in the ring, telling Balor that he understands his frustration, but warning him not to talk about him.

The champ looks to leave, but Balor pushes him to the floor, bringing both a death stare from Reigns and The Usos from behind Balor to deliver a beatdown. As Reigns is nearly backstage, Balor turns the tables and takes out both Jimmy and Jey, forcing Reigns to return to the ring.

A Slind Blade brings Reigns down, but The Usos are back and they hold Balor for a Superman Punch. The show ends with Balor down and Reigns holding his title high.

Some promising matches cut short and plenty of nonsensical talk. Considering those are the two main things the audience comes for, this episode shows that what the WWE needs right now is an off-season to re-group and start fresh.