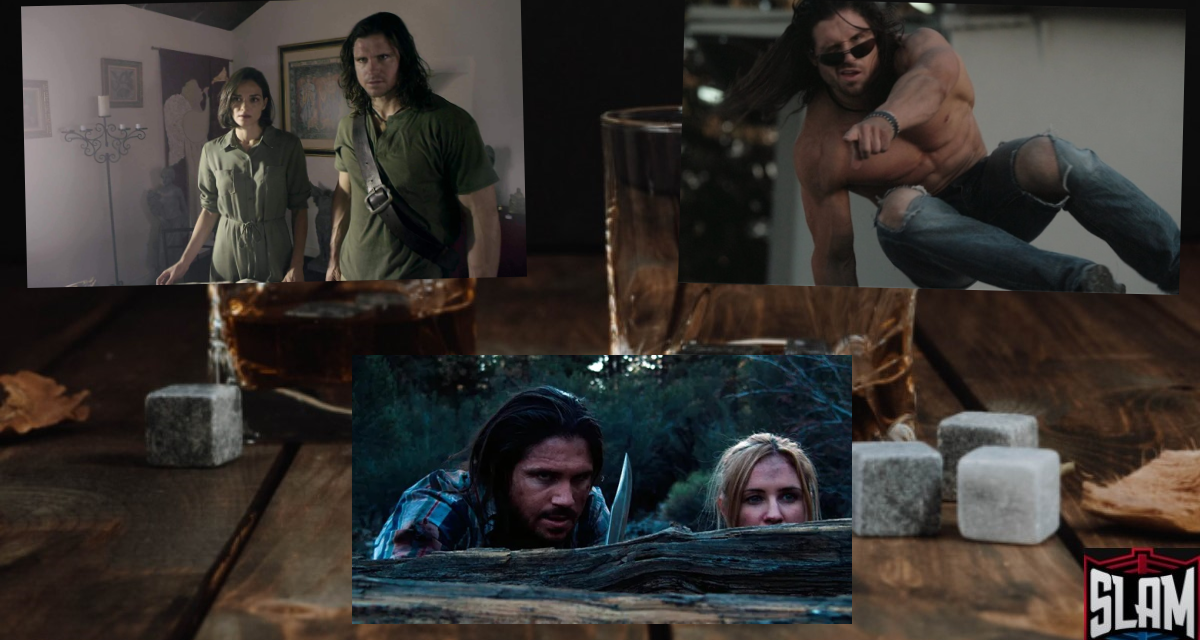 Welcome to another column of Squared Circle and Shots, the ongoing column that continues the quest to watch wrestlers turned actors on the screen and decide how much the eyeballs can stand before taking a vodka and tonic eyewash (it’s a thing, trust me).

If you’re new here, we’ll talk about the acting and the number of drinks needed to tolerate the trainwreck of cinema. As always, the excerpts reported here are done by trained professionals. Do not try this at home … or do, for all I care. No one is forcing you to drink or not drink. Just get someone to drive you home.

For this month, there was a particular actor whose action acumen and acting skills deserved a little attention.  Most actors know how to play a certain role, and then they just stay in their lane. John Statham is pretty good in British “toff guy” roles, David Spade cornered the “snarky guy” market, and there are others you can list as well.

You may know him as Johnny Nitro, John Morrison, Johnny Mundo, Johnny Impact, or Johnny Drip Drip. No matter what you call him, he is a professional wrestler, and has turned in some interesting roles on TV and movies.  You might have seen him in Sharknado 5: Global Swarming, or his cameo in the first episode of the Netflix series GLOW, as Salty “The Sack” Johnson.  Most of the films reviewed here focus on movies that were released either to streaming platforms or video on demand (VOD) in 2017, when Morrison was away from WWE and focusing on AAA and Lucha Underground.

That year was a busy year for Johnny Drip Drip starring in action films. As for the main roles he played, they are one-note but seem to fit within his wheelhouse. If I had to describe his portrayal across the board, I would call it: “Him-bo with a Heart of Gold.”  The character is basically the same trope: Narcissistic pretty boy thinks only of himself, but through a series of unfortunate events where wackiness ensues, returns to the light and redeems himself and takes out the Big Bad Guy, for good measure. Don’t believe me? Well, then ladies and gentlemen of the jury, I submit Exhibit A…

Sinbad (Hennigan) is a scion of the legendary adventurer and now a treasure hunter/thief due to tangled history involving his ex-flame’s father, Jax (Jamie Bernadette).  After finding an unusual emerald which is suspected to be the heart of Medusa his life falls in danger. He opens the curse and releases three angry souls who want to kill him, and all men. Meanwhile, a Russian gangster called Manta (Josh Fingerhut) also seek it to convert it to a deadly weapon. Now Sinbad has to save himself from the villains from both the spirit world and the real world, and wackiness ensues.

As for the wit of the movie, feast your ears on this bon mot:

Jax: A group of nine is called an ennead, and multiple enneads is called Erineys, which is a Greek term for….

Jax: Exactly. We live in a mathematical universe, and somehow, a time of 3:33 unlocks a dimension between our world and theirs.

Sinbad: That central or mountain time?

Jax: (Sigh) I just can’t figure out why they can’t stay in our world. Like, what keeps sending them back each time?

Sinbad: Maybe they have part time jobs as telemarketers? That would explain what they’re pissed off all the time.

This show needs 4 shots of Outlaw Distillery Rum, and a Cuba Libre for treasure hunting, bad Russians (like there is any other kind in the movies), scimitar shenanigans, donations to the Snarky Bitch Club, Weapons of Magical Destruction, Sinbad bad dad jokes, explore the world and screw the seven seas, fabulous Furies, aquatic camaraderie, numerology nonsense, Nick takes a drink, ancient genie dialects, voyage vignettes, Russian stand-offs, flying carpet escapes, the Medusa 2.0, stone sacrifice, and remember … the enemy of my enemy is my Fury.

This show may not be B-Movie magic, but overall, I would give it a “C” (OK, but not great). It feels like it had the potential as a TV pilot for syndication, but some studios decided to pass, and that’s why you’re drunk in front of the TV watching this. Mix your drinks thoroughly should you decide to re-watch this again.

Of course, the next film might be more of a palate cleanser with Morrison’s next offering…

Rick Rainsford (Morrison) is a drunk, down-and out celebrity big game hunter who does an expedition for fans in a vain attempt to re-capture his fleeting fame, when an accident on a passenger boat leaves him trapped on a deserted island with his reluctant companion, Anna (Michelle Taylor). While attempting to save another gravely injured survivor they find themselves hunted by Zaroff (Eric Etebari), a sociopathic ex-KGB Agent along with his hairless (and eyelash-less) partner, Ivan (Joseph Gatt). In spite of their differences, Rick and Anna must work together to disarm Zaroff’s deadly traps, survive his assistant’s brutal attacks, and escape the island alive.

As for the banter in the film, this is what passes as dialogue:

Rick Rainsford: Are you okay?

Anna: (shoves Rick) What are you doing?!

Rick: I don’t know!  It’s what people do when they freak out. I thought it might calm you down… or turn you on.

Rick: It calmed you down, didn’t it?

Know what else goes down smooth  I’d say 3 shots of Outlaw Distillery Bourbon and a Runaway for: knocking off pretty people as a public service, no sober heroes, pissed off photographers, bad news on a boat, creepy hairless Russians, triage on the fly, vodka: the Russian standard, chatting up with the psycho hunter, kissing calms no one down, going full Kraven, don’t drink the canteen, exploding mortar, crazy booby traps, dodging arrows, firelight confessionals, wilderness beat downs, being sportsmanlike with the psycho, land mine luck, bad guy quandary, Predator showdown vibes, and indubitably … a nasty knife fight.

It’s a step below Surviving The Game, but a little more think-y than The Condemned. The redeeming part of this movie is Morrison and Taylor’s chemistry throughout, and shows that Rainsford has a heart, even when he’s at his “Him-bo-iest” (I think it’s a word).

But probably, the best of the bunch is his signature movie…

As fame-seeking, parkour running, reality show bounty hunter Boone, Morrison hunts down the dangerous B-listers of Los Angeles. The first five minutes has him in pursuit of Kevin Sorbo, which is exactly what he deserves. Boone is in danger of his reality show getting cancelled, but a hot tip from a government DEA agent (Corbin Bernsen) gives Boone the score he needs to secure his show’s future. With the help of his camera crew, they travel down to Mexico pick up a bail jumper that killed a girl with a new party drug. The kid, Ryan Davenport (Johnathan Lipnicki … yeah, the kid from Jerry Maguire) is the son of a drug lord, and he’ll need the help of the locals like Lorenzo Lamas and his crew like Quentin “Rampage” Jackson to bring justice to the town … and garner a few ratings along the way.

The banter (co-written by Morrison himself) has such gems as this exchange:

Ryan Davenport: Anyone there?  I’ll give you ten thousand to help me out! That’s, like a million pesos in Mexico.

Boone: 10 thou? I’ve got leather pants that cost more than that.

As a bonus, you take a drink anytime the word “Boone” is used during the movie, but please pace yourself.

A lot of Morrison’s hard work went into this, from starring, co-writing, and producing this film. He’s even gone on record as selling his dream home in Los Angeles, and taking a pay cut to get the film finished up. His goofy “Him-bo-ness” is on full display, as is his parkour athleticism, and that combination make this a movie worth watching over and over again.

So, enjoy these movies whenever you can, with as much drink as you can.  If you have suggestions for movies to cover for Squared Circle Cinema and Shots (or drink ideas), please send them along. In the meantime, save me a seat and a shot!