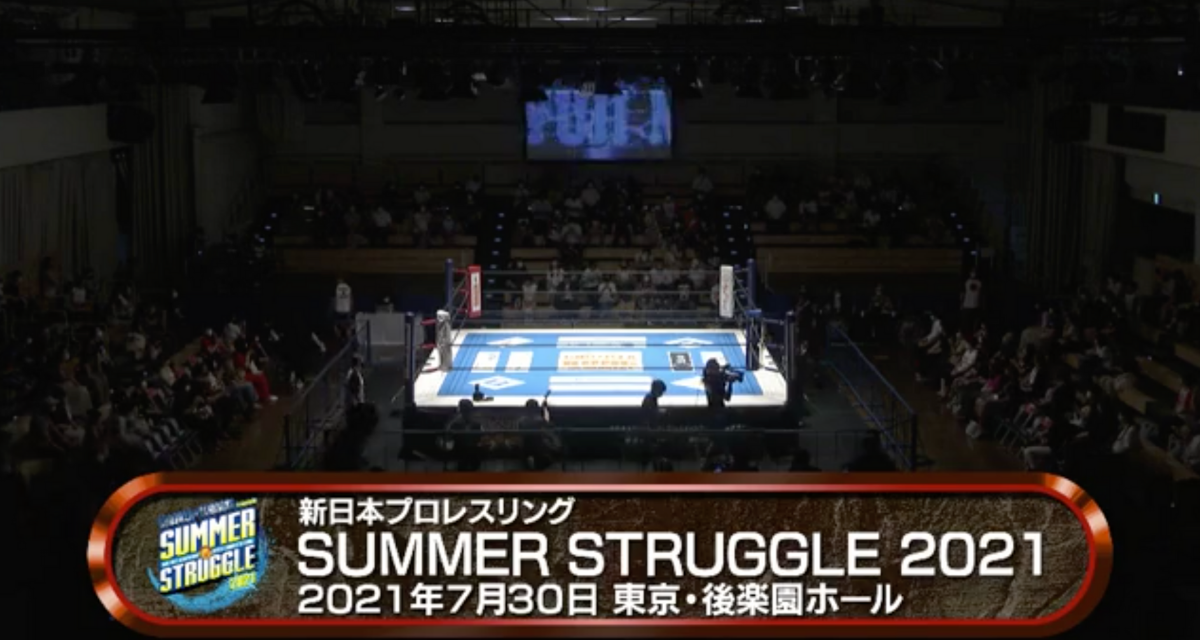 Stepping up to the plate to cover this morning’s NJPW show is SlamWrestling.net’s Amos Mina. NJPW has always been my favourite pro wrestling product to watch, even when it comes to these small tour shows. Should be a fun one!

To start thing off with a bang, Makabe irish whips the hell out of his two young lion partners into their opponents. Crazy! Double dropkick by the young lions to Kojima. Tsuji goes for a senton and splash combo on Kojima for a 2 count. The two teams exchange momentum as Kojima hits a neck breaker for a 2 count. Nagata and Makabe work each other in the corner as Makabe tries a northern lights suplex, which Nagata fights off, but he gets caught with a lariat. 2 count only. Uemura gets tagged in shortly thereafter and so does Tiger Mask. Those two battle it out for a bit till Kojima gets tagged back in and it is ultimately Kojima who wins the match for his team with a huge lariat on Uemura.

Show of respect between Wato and SHO to start off the match. They take on a very Muay Thai/kickboxing-esque approach as they exchange kicks and strikes, but nothing really connects. Both guys abandon this style quickly and begin implementing some high-flying offence into the match. A bunch of flips and rolls as Wato hits SHO with a back elbow, forearm, and RVD kick combination. Taguchi is tagged in and Wato joins him in a double corner attack on SHO in the corner. SHO is in the ring for a while until YOH tags himself in. YOH isn’t in for long as he goes to tag in Okada. This becomes a recurring theme in the match as the members of CHAOS take turns in the action. Tenzan hits a brain buster on Okada for a 2 count. The action eventually spills across the ring as Taguchi and YOH continue the match. Taguchi has YOH hoisted up for a face buster I assume, in which both men exchange roll-ups. YOH tries an o’connor roll but Taguchi is able to reverse it into a pin and a 3 count win for his team.

Owens and Gedo sneak attack their opponents with a cheap shot to Yano and a spray to the face of Tanahashi. Owens starts kicking away at Yano in the corner. Irish whip by Owens to Yano but the crafty Yano undos the turnbuckle pad, exposing the metal rings, in which Owens hurts himself running into the corner. Yano undos the other turnbuckle pad but Owens takes note, however, Yano still irish whips Owens into the other exposed metal rings. Gedo comes into the ring and he also tastes some metal rings, where he shouts expletives, which I thought was pretty funny. Takahashi and Yano are both in the ring and they wanna send both BC members into the exposed turnbuckle rings, but they get reversed. The match continues with the BC members executing a violent attack on their opponents throughout. Regardless, the veteran Tanahashi is able to counter the attacks and is able to lock in his Texas cloverleaf on Gedo for the win.

Taichi and Goto start off the match. They exchange lockups until Goto gets the upper hand on Taichi and hits a big shoulder block. Sabre Jr tries to get a quick running attack on Goto as he’s in the corner but he is unable to hit it. YOSHI-HASHI enters the ring to even things out and the four men square up face-to-face. They agree to level out and leave the match to two men only. The two heavy hitters agree to match up in the ring, Suzuki and Ishii. Suzuki immediately goes to push Ishii, but he doesn’t budge. He even asks Suzuki to hit him. They exchange big forearm shots and strikes in the centre of the ring. The action spills to the outside but then the members of Suzuki-Gun choke out Ishii with their boots. Ishii gets the crap kicked out of him for a while until he’s able to tag in YOSHI-HASHI. Sabre Jr also gets tagged in. Sabre Jr tries to do a running dropkick but Goto comes in to stop it, then YOSHI-HASHI hits a super kick on Sabre Jr. It’s YOSHI-HASHI/Goto and Sabre Jr battling it out for a bit until Robbie Eagles joins the fray. In the end sequence of the match, Ishii has Suzuki locked up in the corner, Robbie Eagles has Douki locked in to his submission finisher in the ring, and YOSHI-HASHI stops Sabre Jr from breaking up the sub. Douki taps to Eagles securing the win for team CHAOS.

Main event time! Shingo starts things off with EVIL, when Dick Togo offers a distraction for EVIL to attack Shingo. Shingo hits EVIL with some seated elbows and tries a running attack, but EVIL escapes to the outside. EVIL tags in Takahashi, but Takahashi doesn’t want Shingo, he wants Tetsuya Naito. BUSHI soon joins the fray and so does SANADA, where all four members of LIJ beat up Yujiro Takahashi. The match later spills to the outside as all eight men battle it out. The legal men in the ring teeter-totters for a while, until we get our first elimination in Yujiro Takahashi. Shingo eliminates him with a death valley driver on the ring apron. However, Shingo is also soon eliminated after EVIL was able to shoulder block him off the apron and to the outside. Huge elimination for LIJ and a momentum shift for BC. Later, Ishimori and SANADA are fighting on the apron as SANADA is able to swing Ishimori off the apron, another person eliminated. It’s an even 3-on-3 now. El Phantasmo sees SANADA still hanging on the apron and he goes in for another elimination, when he rakes the back of SANADA, eliminating him. It’s a 3-on-2 now. Naito immediately goes after ELP, as he sends him flying over the top rope and face busters him on the rope, but Ishimori breaks the fall and saves his partner. ELP is too busy celebrating his team’s sneaky antics, when Naito leg sweeps ELP and follows with a front dropkick to eliminate him. It’s down to EVIL versus BUSHI & Naito. Naito hangs on the ring apron by the skin of his teeth, as he hangs on with his feet on the ropes. But as the ref is turned, Dick Togo goes in for some cheap shots and EVIL goes in to kick Naito’s feet off the ropes, where he is successful. It’s down to BUSHI and EVIL! BUSHI is feeling it and he wants to secure the victory for LIJ. He hits a big codebreaker but Dick Togo distracts Red Shoes to count the pinfall. EVIL goes in for the low blow but he is distracted by Shingo going after Togo. He stupidly hangs off the middle rope, allowing BUSHI to send him flying over the ropes, and winning the match for Los Ingobernables De Japon.