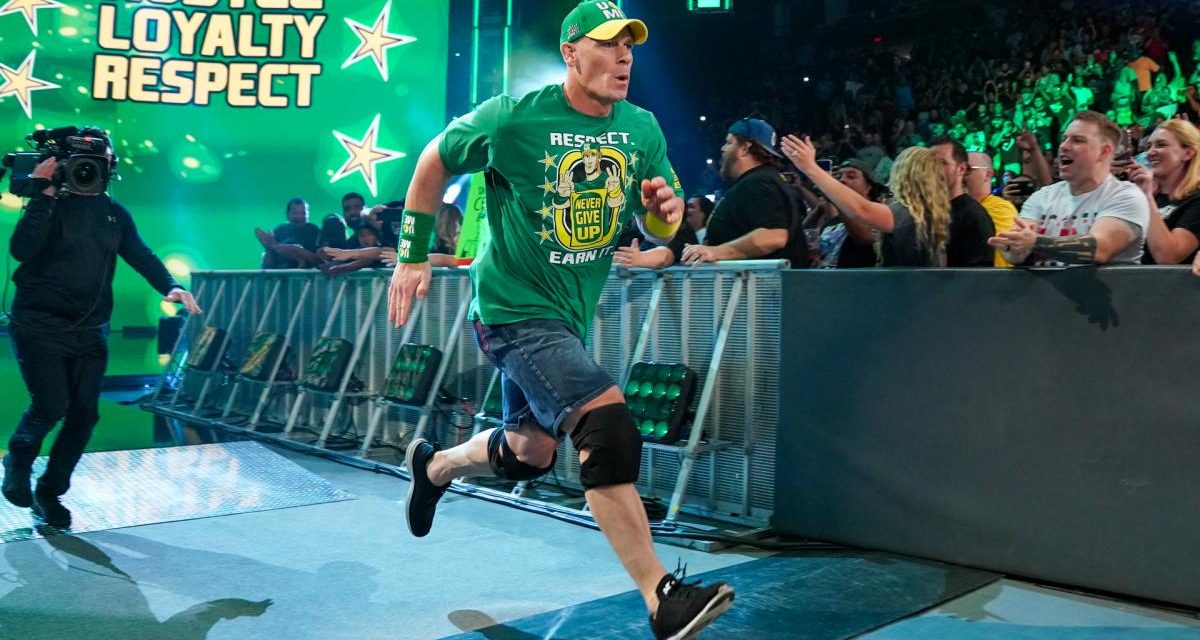 Featuring a contract signing for SummerSlam, this July 30th SmackDown hosts the return of a WWE Superstar!

John Cena kicks off the show, with a cheer-boo ratio from the crowd that is rather accustomed to his music hitting filling the arena. He talks about how stupid it was when Roman said that Cena is the same old person he was since he was last in WWE. Cena says that’s stupid because the way he looks is simply a part of who he is. He says Roman doesn’t understand that, since Roman has to change his gimmick every two years because the fans stop caring about him.

Baron Corbin makes his way to the ring, looking somehow even worse than he did last week. He laments about the various aspects of his life that are falling apart. Apparently his wife has left and she’s taken the kids, and he asks Cena for some help. Cena gives him the cash he has in his pocket, and Baron gets upset. He says it’s not enough cash, and that Cena is a egotistical tightwad. Cena tells Baron he’s going to give him something he desperately needs: an Attitude Adjustment. Cena drops Corbin with the AA, and Corbin’s luck continues its downhill trend.

Jimmy Uso shoves the smaller Rey around at first, hitting him with a superkick to the gut, but Rey strikes back with a headscissors before delivering a second rope bulldog. Jimmy picks Rey up in a Fireman’s Carry before slamming him neck first into a turnbuckle for 2. Rey sends Jimmy to the apron and kicks his feet out from under him, sending him face first into the apron. He looks for his sliding splash, but Jimmy moves out of the way. Rey rolls and avoids a hard landing, but Jimmy catches him with a jaw-rocking superkick as we go to commercial.

When we come back, Rey is hitting Jimmy with a kick to the side of the head. Rey goes to the apron and looks for a springboard maneuver, but Jimmy hits him with an enzuigiri. Jimmy pulls Rey to the top rope and looks for a superplex, but Rey shoves him away and delivers a flying senton and a corkscrew springboard splash for 2. Rey looks for a splash in the corner, but Jimmy moves and hits an enzuigiri. He looks to continue the assault with a Samoan Drop, but Rey reverses it and sets Jimmy up for the 619.

Jey pulls his brother to safety, so Rey dives out of the ring onto both of them. He sets Jimmy back up for the 619, but Jey distracts him, allowing Jimmy to regain his composure and catch the legs of Rey off the 619. He looks to reverse it into a Samoan Drop, but Rey turns it into a rollup, and Dominik pushes his feet against his dad to assist the pin to get the win, just as the Usos did last week. 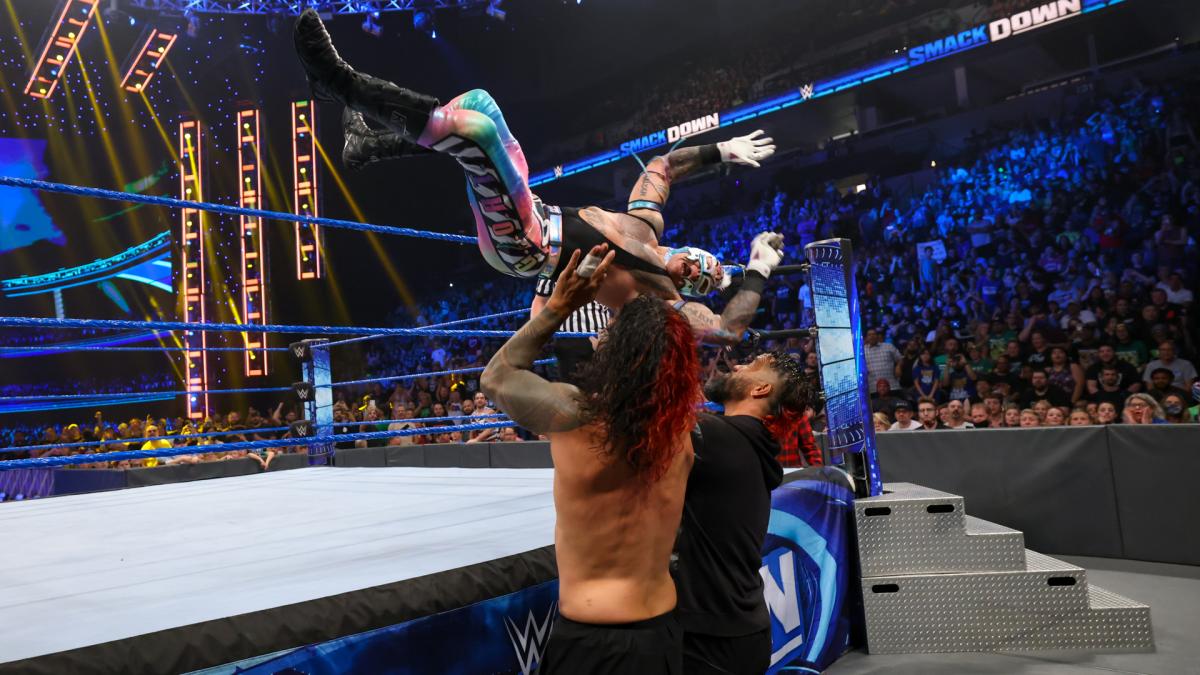 Rey Mysterio dives onto both of the Usos. Photo: WWE

Kayla Braxton interviews the SmackDown Women’s Champion, Bianca Belair. Kayla reminds us all that Belair has now been champ for over 100 days. Kayla asks Belair what the next 100 days as champ will look like for her. She doesn’t get to say much, as Carmella comes out to congratulate her on 100 days as champ. She says that Belair should cement her legacy by giving Carmella another shot.

Reginald is rocking his own theme and everything! He’s still just wrestling in a suit though. Otis runs over Reggie with a shoulder tackle before the match even starts, giving Chad the advantage. Chad delivers a Northern Lights Suplex for 2, and Reggie starts flipping around Chad, evading his attacks. 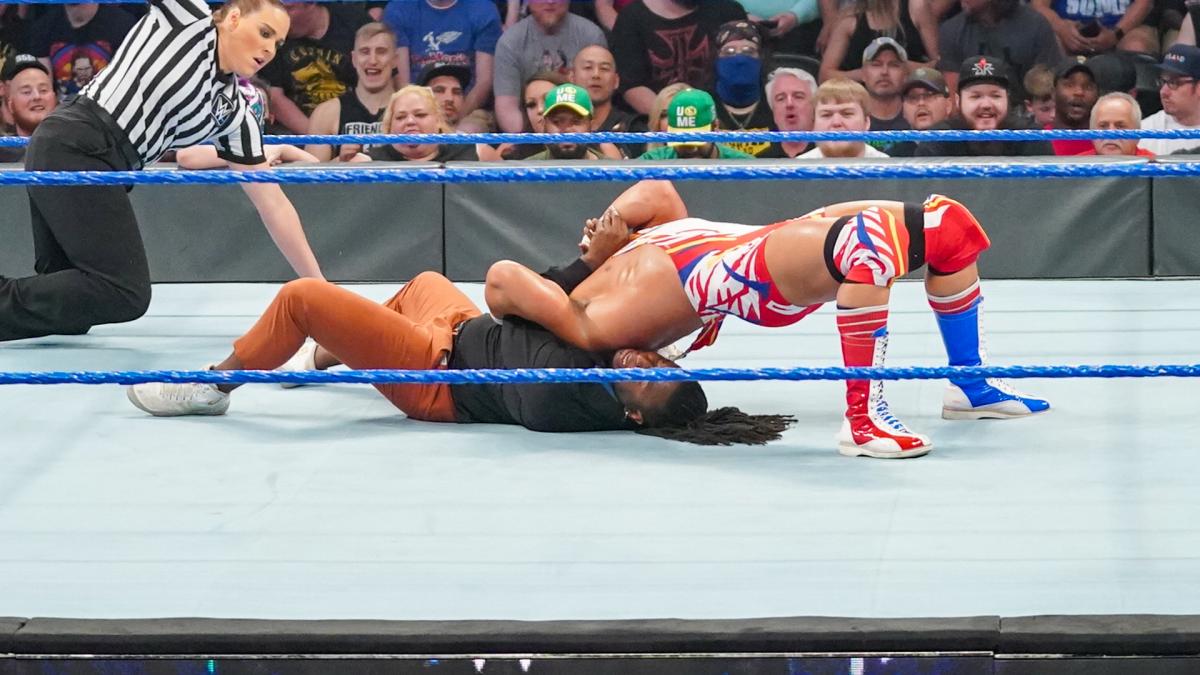 This match was nothing but perfect suplexes and perfect flips, and I really enjoyed it. No story between the two, just two wrestlers showing the cool stuff they can do. Photo: WWE

Time for the contract signing between Roman Reigns and Finn Balor for their match at SummerSlam. Roman sits himself down at the head of the table as usual, and he asks Heyman for a mic. He tells Finn that Cena thinks Finn is less than him, since Cena said that when Roman declined Cena’s challenge and took Finn’s, he was ducking Cena. He compliments Finn, saying he’s hungry for the title and he likes that about him, but promises to beat Finn and send him back to NXT.

Finn says he’ll be glad to return to NXT as a 2-time Universal Champion. However, before he can sign the contract, Baron Corbin comes in and attacks him. He brings him outside and tosses him into the timekeeper’s area. Baron grabs the contract and goes to sign it, but John Cena comes in and beats him up, before signing the contract himself. You’ve got to be kidding me.

Backstage, Paul Heyman asks Sonya Deville and Adam Pearce what they’re going to do about the SummerSlam contract, since there’s no way that one’s legally binding. Pearce says he sees Roman’s signature, and he sees Cena’s signature, and that’s good enough for him to take away the opportunity that Finn has deserved for 5 years. Roman will face Cena at SummerSlam.

Man, I just never get tired of Rick Boogs on the guitar. Big E immediately delivers a Belly-to-Belly Suplex, but when he goes for a spear through the ropes, Apollo stops him with a knee. The Dirty Dogs pull Big E out of the ring and hit him with a Spinebuster/Zig Zag combo as we go to commercial.

When we come back, Big E is tagging in Cesaro, and the Swiss Cyborg comes in and hits Ziggler with a discus clothesline for 2. Cesaro sends Ziggler for a Swing before locking him in the Sharpshooter, but Roode helps Ziggler get to the ropes. Cesaro tags in Nakamura, and the King strikes with a flying knee. He looks for the Kinshasa, but Ziggler reverses with a Zig-Zag. Ziggler tags in Apollo, who hits Nakamura with a picture perfect standing moonsault. 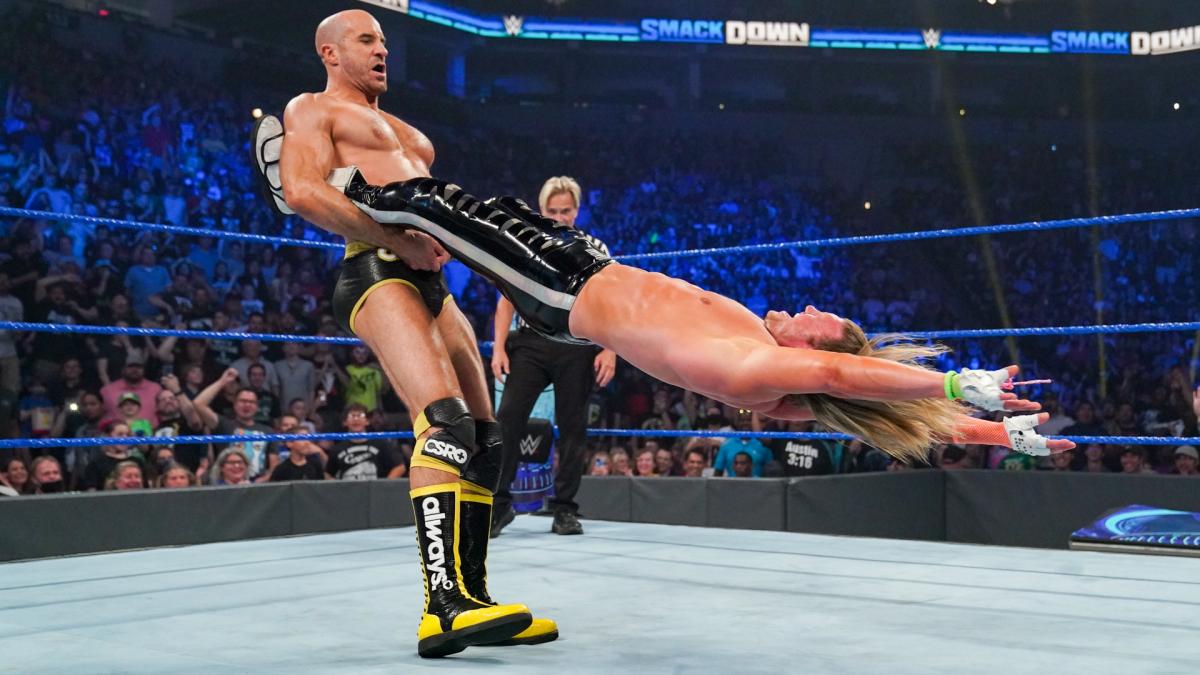 Ziggler really looks like he’s having more fun than anyone else while in the swing. Photo: WWE

Cesaro breaks up the pin, Roode hits him with a Spinebuster, Big E hits the Big Ending on Roode, Ziggler takes out Big E with a Famouser, and Nakamura hits Ziggler with a kick. He turns around right into an enzuigiri/German Suplex combo from Apollo, but the King kicks out at 2. Apollo looks for a Frog Splash, but Boogs distracts him with a guitar solo. Azeez takes out Boogs, but the damage has been done, as Nakamura has regained enough composure to get out of the way when Apollo goes for the Frog Splash, and he delivers the Kinshasa to pick up the win for his team.

Belair starts off against Carmella, hitting the Princess of Staten Island with a kick before tagging in Banks. The two deliver a double shoulder tackle for 2, but Carmella rips Banks down to the mat by her hair before hitting her with elbows and tagging in Vega. The two look for a double suplex, but Banks comes in and she and Belair deliver dropkicks that send their enemies to the outside. Belair goes outside and picks up Banks before tossing her into Carmella and Vega as we go to commercial. 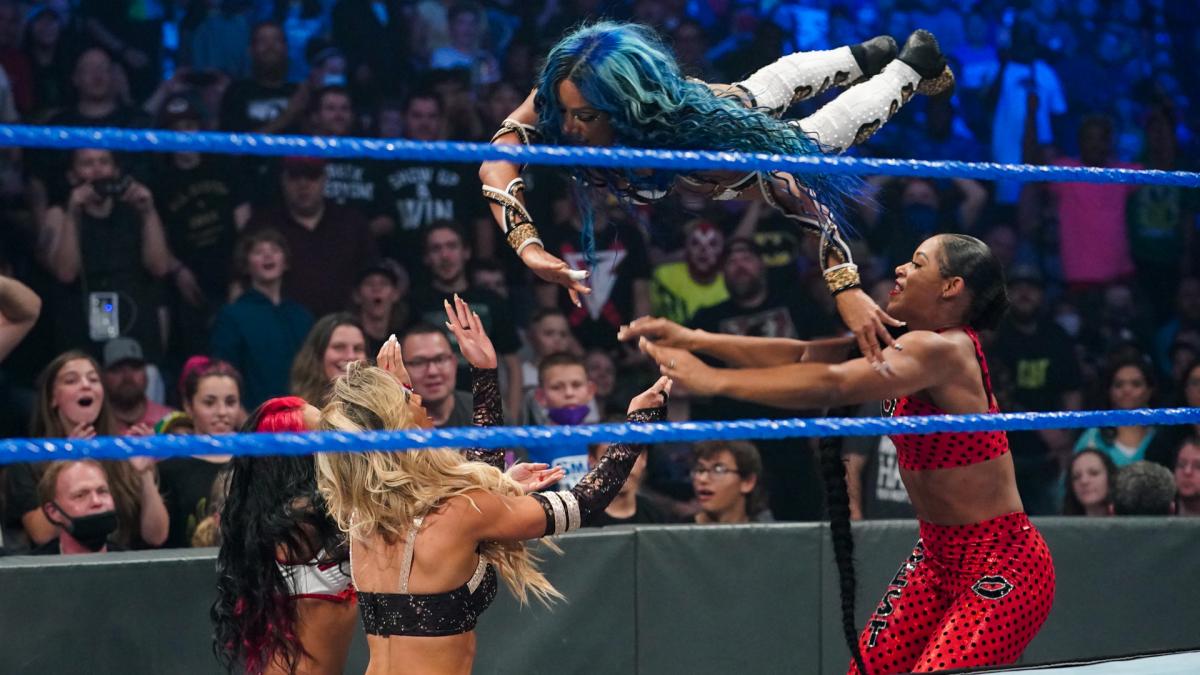 Sasha gets thrown onto her opponents by Bianca Belair. Photo: WWE

When we come back, Vega is in control against Belair, locking in an Octopus Stretch. Belair fights out, but Vega beats her down and tags in Carmella. Carmella stomps Belair down in the corner, Belair hits Carmella with a clothesline. Carmella tags in Vega, who’s able to prevent Belair from getting to her corner. Vega locks the Octopus Stretch back in, but Belair reverses it into a backbreaker. Belair tags in Banks, who hits Vega with a meteora, a dropkick, and the Three Amigos.

Banks climbs to the top rope and delivers a Frog Splash, but Carmella breaks up the pin with a superkick, before bringing Vega to her corner and tagging herself in. Carmella delivers an X-Factor, but Belair breaks it up, before tossing and interfering Vega to the outside and pursuing her there. Carmella goes for another X-Factor, but Banks reverses it into the Bank Statement to get the victory, marking this as a successful return for the Boss.

The two celebrate in the ring, and to everyone’s surprise, Sasha hits Belair with a backstabber and starts beating the champ with the titles. The Boss delivers a brutal Tornado DDT before locking in the Bank Statement until Belair taps out. Banks seems as if she’s done, but then she locks back in the Bank Statement until the screen fades to black. 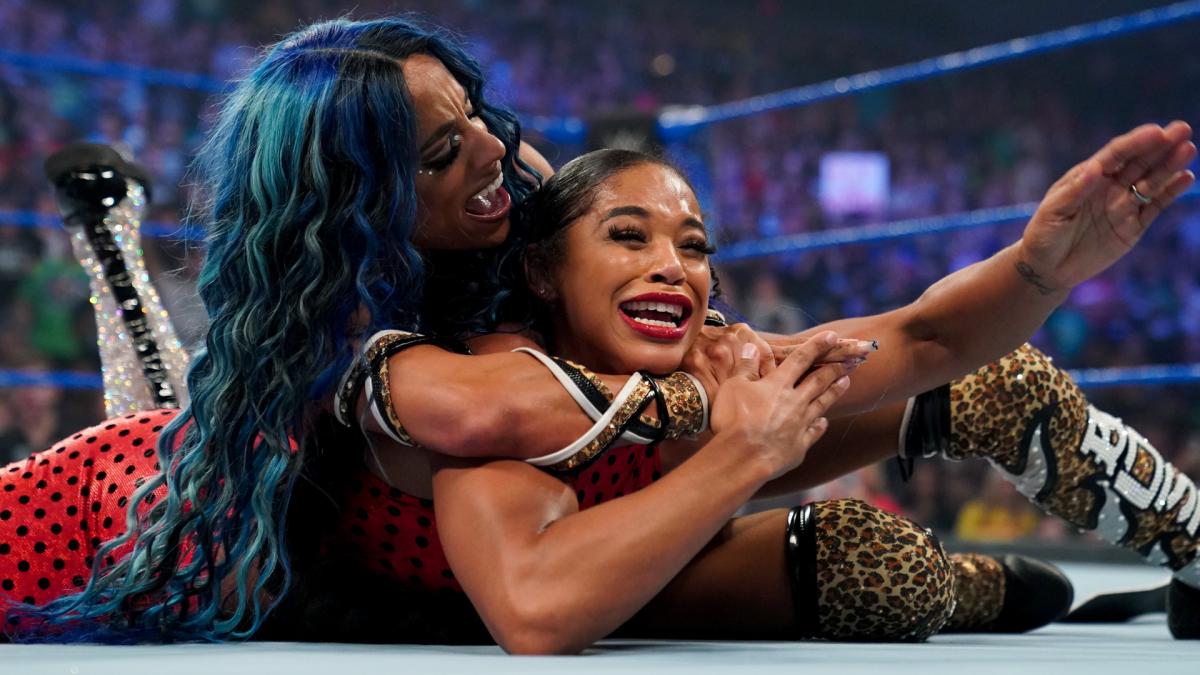 Most of the show was great, Sasha’s return is lovely to see and I’m always up for some Reginald acrobatics, but the show was just ruined by the contract signing. I mean I knew that Cena wasn’t just going to get turned down and leave, but to see him physically taking an opportunity from a more deserving wrestler just really sucked. It just sucked.