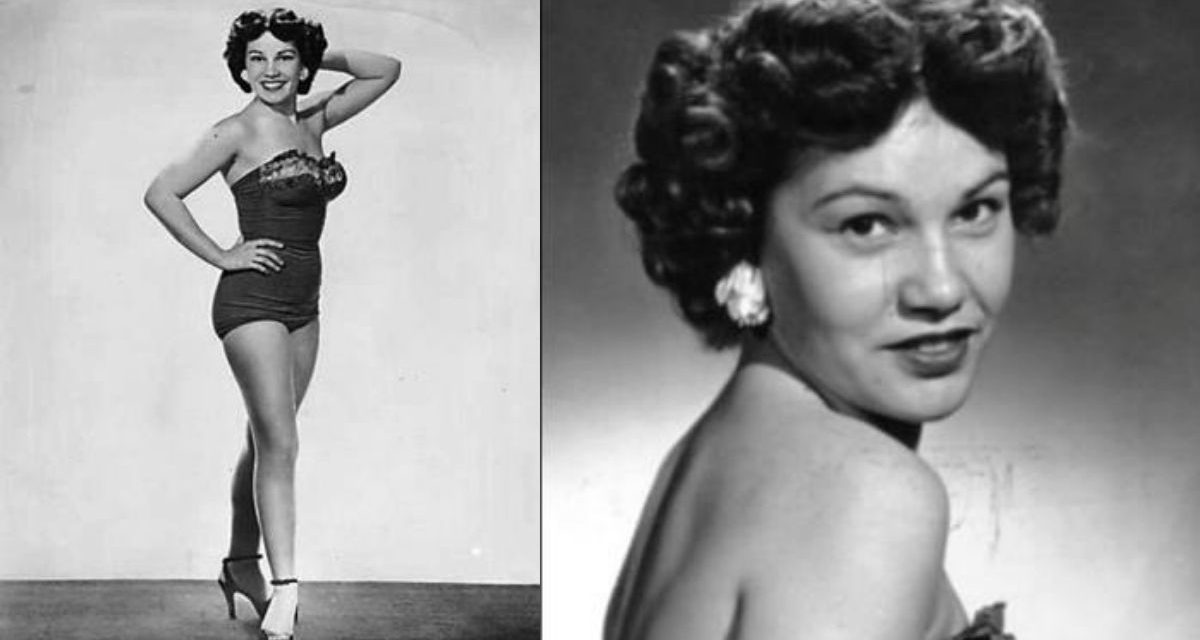 Ethel Brown, a women’s wrestling great, who wrestled in the 1950s, has died at the age of 90. As notable as her pioneering career in the ring was, her work as a nurse and her volunteer work in retirement, had a greater effect on the world.

In 2006, Brown Aschenbrenner told this writer, “In retirement, we found that if we volunteered our time doing something, it was a lot more rewarding.”

She was born Ethel Craig, and grew up poor in Columbus, Ohio. She was married at 15, with a child soon after, and the union broke up when her husband was violent towards their daughter.

In an interview with GloryWrestling.com, Brown talked about her start in pro wrestling:

I attended wrestling matches in Columbus, Ohio every week and I always had a seat behind Emerson Davis, sports writer for the Columbus Journal. Although we became fairly good friends, he must have resented the abuse he got from me when I would get excited about a match or a decision the referee had made that I disagreed with. He asked me one night if I had ever thought about getting in the ring to fight instead of wasting my time fighting outside. He also suggested that Billy Wolfe was a good friend of his and he could set up an appointment if I liked. Three short months after meeting with Billy, I was on my way to Boston with Cora Combs as my tag team partner, ready to take on the world!

It was common to play with the facts in the ballyhoo. A 1952 story in the Athens Messenger said that Brown had a “remarkable record,” having “lost but one match in her entire career, and that to Nell Stewart who gave World Champion Mildred Burke a hard time last year.”

Brown did have battles with another women’s champ, June Byers — who apparently broke Brown’s nose on purpose, blackening her eyes; it was a test to see if Brown had what it took to stick around. Brown fought back on another occasion. “I had used a head butt and it knocked her out. After the match, she came to my dressing room with a big knot on her head and said ‘now we’re even.'” Brown told GloryWrestling. 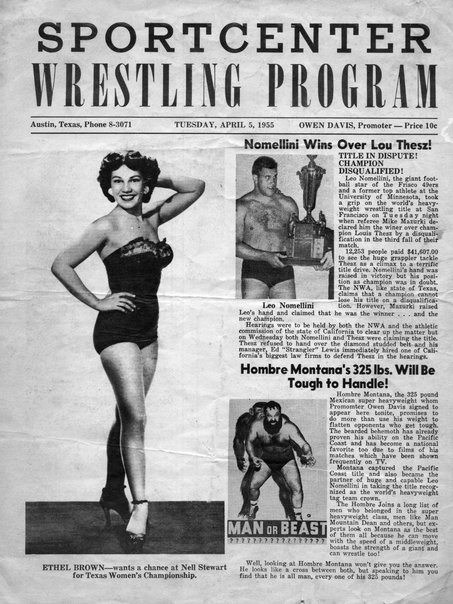 A 1955 program from Austin, Texas, with Ethel Brown.

Fast-moving, without a real gimmick, Brown traveled the roads. She noted that she had a “more aerial” style, that she copied from Antonino Rocca. “He gave me my style pretty much, so I was pretty much a lot like him.”

Over the years, a few colleagues noted her skills.

“I wrestled her. She was good,” noted Belle Starr.

A frequent tag team partner was Barbara Baker. “I thought the world of [Ethel],” said Baker. “She was just everybody’s friend, she was a good friend to me. She was a good wrestler. She was short.”

“We just seemed to click as tag partners, and we spent a lot of time together. Billy [Wolfe] liked it that we were such good tag partners. We got along well outside the ring. We’d room together – she’d have her room, and I’d have my room. But we’d borrow each other’s clothes. There’s a picture of Barbara on the Internet, I don’t know who’s site it is, but I saw a picture of her wearing my bathing suit! But we were that close,” said Brown in 2006. 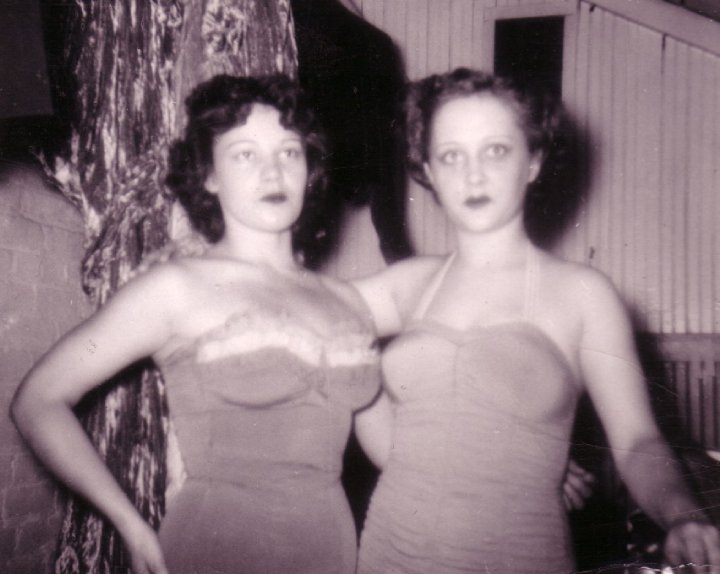 There was plenty to like about being a woman wrestler, Brown told GloryWrestling:

In the beginning it didn’t seem too great. It was a lot of hard work and really heavy travel. But as I began to make money, I was able to buy my own car and shopped at Nieman Marcus. I found my own self-image improved. I won’t say I was in love with myself… I just was no longer ashamed. I had come from a poor background, had a daughter to support and hadn’t even graduated from high school. My self esteem greatly improved and the respect that was bestowed on me was like a magnet drawing me in and holding me there. What was most appealing? I had two fan clubs. One in Texas and one in Canada. They were so adoring. If I could have, I would have packed them all in my suitcases and taken them everywhere with me. They were wonderful people. I truly enjoyed being invited into their homes.

Post-wrestling, Brown took a job as a singer at The Blue Mirror Lounge, in Baltimore. There, she met her husband. They had two daughters and three sons, making six children born to Brown. After the youngest was old enough for full-time school, Brown did her high school equivalency exam and then began studying to be a nurse at Bucks County Community College, in Newtown, Pennsylvania.

She then spent 20 years as a dialysis nurse in Chicago, followed by a supervisory and educational role in dialysis in Florida.

They retired to Pennsylvania, and dove into volunteer work. Brown did everything from work election polls to run a non-profit, Partners in Progress, Inc., that focused on “on quality of life issues.” 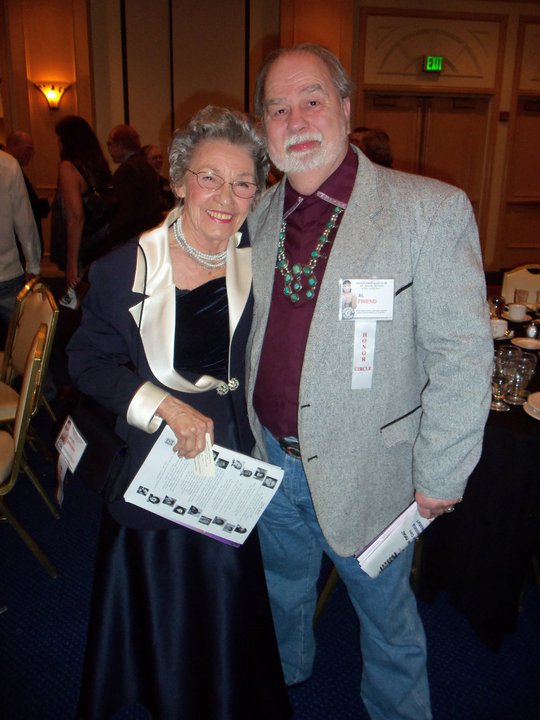 Penny Banner found Brown, and brought her into the Cauliflower Alley Club family — Brown received a Women’s Award in 2000, and returned often — and she also attended the Gulf Coast Wrestlers reunions on occasion.

Documentarian Chris Bournea (Lady Wrestler: The Amazing, Untold Story of African-American Women in the Ring) has done much research into Brown’s era of pro wrestling. “Ethel Brown was a true pioneer who helped shatter the glass ceiling for women in the wrestling industry. She was one of the originators who helped make women’s wrestling an international phenomenon during the sport’s Golden Age in the 1930s, ’40s and ’50s,” said Bournea. “Ethel was also a trailblazer on race relations, befriending African-American peers like Babs Wingo and Ethel Johnson. She will be forever remembered as a legend.”

In 2006, Brown compared the wrestlers of her today to what she had seen on TV. “I look at it now, and I look at the wrestlers, and I think as rough and tough as it was when we were in there – we took a lot of beatings, we weren’t in near as much danger as they are today. Because today, they’re really entertaining, and they work like heck at it.”