Since the code of silence among the wrestling fraternity was broken some years ago, there has been a plethora of books penned by male wrestlers that have given the general public a fairly honest appraisal of the game and revealed secrets that were never before considered common knowledge.

Now a startling new book centering on legendary women’s wrestling champion Mildred Burke offers an even more revealing perspective on the female side of the wrestling equation.

In The Queen of the Ring: Sex, Muscles, Diamonds and the Making of an American Legend, published by Atlantic Monthly Press, author Jeff Leen documents the most compelling account of lady wrestling that has ever been recorded and in so doing reveals a side of wrestling that will not only surprise but sadden many long-time wrestling observers, fans and students of the game. It is available now in most major book stores. 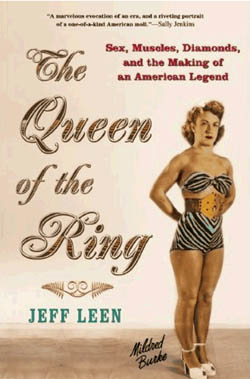 The book is an exposé of greed, deceit, control, exploitation, lust — and a great many other ingredients of the human condition. Against a background of socio-economic conditions during the Great Depression, Leen spins a riveting tale of a small town Kansas girl looking for her fortune at the end of the rainbow in a male-dominated world. This is not exclusively a wrestling book. The elements contained in the story could very well have been present in a hundred other such stories even though events take place in a wrestling environment.

Make no mistake, this is a tell-all book and although not a first-person narrative, it is written in a tasteful and factual manner given regards to all the circumstances of the period. The author takes no liberties with the truth but in the absence of clear conclusions, offers educated opinions.

Author Leen is the assistant managing editor for the investigations unit at The Washington Post where his work has helped win six Pulitzer Prizes. The fact that he lends his impressive credentials to this historical account makes it all the more credible and lays bare the remaining myths and secrets of the matrons of the mat.

The author painstakingly combs through a maze of research material to give the reader a most accurate and reliable account of lady wrestling in an era when it was largely controlled by one man, a former professional wrestler named Billy Wolfe. But while Wolfe is central to the story and the chief antagonist, the book focuses on the life and career of Millie Bliss who gained fame, if not a measure of respect and success in a wrestling ring as Mildred Burke, after leaving the dust bowls of Kansas as a single mother

Burke’s climb to the top is long and arduous but is captured by Leen in all its stark nakedness, for nudity and sex are interwoven on the wrestling mats and in hotel rooms in a business dominated by men.

Billy Wolfe was close to the three count of his wrestling career and had turned to promoting female wrestlers at carnivals when he met young Millie Bliss in a subway and enlisted her into his stable of lady wrestlers. It was the grimy atmosphere of the carnivals that Wolfe introduced to the young, attractive woman he renamed Mildred Burke because arena wrestling featured male participants only.

Most of the young women recruited by Wolfe, who was in his mid-thirties, were facing a dark future and willing to follow a dream that not only promised them riches but a way out from their bleak circumstances. But while his relationships with his female wrestlers usually blossomed into sexual liaisons, it is noted that Wolfe never forced himself unto his muscular chattels. When Wolfe discovered each new girl, all he wanted to know was if they could wrestle and if they would sleep with him. If they couldn’t and they wouldn’t, then they just weren’t a part of Billy’s harem.

This was the pattern he established with young Bliss and her career was to be the blueprint for members of his specialized wrestling empire. In spite of the difference in their ages, their relationship would evolve into intimacy and finally marriage. But Mildred was not to be his first or last lover/protégé since he also groomed many other stars including June Byers and Nell Stewart and entered into relationships with them. Wolfe formed a willing contingent of female wrestlers and used them in whatever capacity was fitting to realize his own ambitions.

What set Burke apart from all the rest was her mastery in the ring which earned her the title of woman’s champion, a distinction she held for many years. She cherished her title and used it to her advantage in her personal battle against Burke and in the boardrooms of the powerful male-dominated National Wrestling Alliance.

After graduating from the carnival rings where she handled all challenges from men and women with ease, Burke became the dominant force in lady’s wrestling and, along with Wolfe, ensured there was a place for women in the mat game. As such she is looked upon as a true pioneer of women’s wrestling and very much a legend in the game.

When he started his promotion in the 1930s, Wolfe’s plan was to establish women on the same level as greats such as Ed “Strangler” Lewis and Jim Londos. This became a daunting task as women’s wrestling was banned in many states. Promising stars of the day did not exactly reach out to the lady grapplers and they were scoffed at by many including Lewis and Lou Thesz. But Thesz appeared on cards and in publicity photos with Mildred and to his credit once cautioned her to watch herself in the clinches when dealing with the likes of Wolfe.

But Burke seems to not have formed any strong alliances with fellow wrestlers other than Gorgeous George, who once loaned her $5,000 in her fight against Wolfe. George was instrumental in reviving wrestling in the television age and credited Burke as an inspiration.

Although Wolfe was a former wrestler himself, he was looked upon with disdain by his peers. “He wasn’t one of the boys, as far as we were concerned. We thought of him as a pimp,” Freddie Blassie once declared.

While it was claimed by some that Burke was a savior of the game, particularly in the 1940s, this is left open to much interpretation since many followers of wrestling considered the ladies to be nothing more than a novelty on a par with midget wrestling.

Leen has reached out to mainstream readers as well as wrestling aficionados and is careful to explain the concept of shoot matches, cauliflower ears, tag teams and other nuances of the game. But since professional wrestling was very much a worked business, the concept of who won or lost or who held what title is lost on the average layman. Shoot matches, where on rare occasions opponents wrestled for real, were more credible but to many fans certainly were not as entertaining as show wrestling.

The fact is no one really knew what to believe in the wrestling world since the fans were duped on so many occasions. When the wrestling fraternity tried to sell something as believable, it was often met with much skepticism. The wrestling business had cried wolf one time too many but what is apparent here is that Billy and Mildred were not crying poor as they basked in diamonds and wealth beyond their dreams, as fans rushed through the turnstiles to watch their product.

While the action was often hot and furious in the ring, it became even more so in the boudoirs and bedrooms as wrestlers and their mates tagged off with different partners. Burke herself had a long standing affair with Wolfe’s son, G Bill while Billy slept with half the girls in his troupe. It was inevitable that separations, divorces and loss of fortunes would follow as in any great American tragedy.

The sexual content is neither graphic nor descriptive. Leen simply records the facts as they unfolded. Women were exploited and those that joined Wolfe were seduced by the prospect of fame and better circumstances in their lives. There are several prime examples of the male authority of the era and the power Wolfe yielded over his women. While his wife Nell Stewart was under anesthesia for an appendectomy, Wolfe had her tubes tied. When he fathered a child with another wrestling girlfriend, Wolfe had the county coroner deliver the child in a morgue.

Billy Wolfe was very much in control of every situation and was the glue that held the women’s wrestling movement together.

Surprisingly there is little humour in this sordid tale with one notable exception. A female wrestler once walked into Al Haft’s office only to find Haft and Wolfe with their pants down, engaged in a situation that can only be described as a big swinging dicks contest. Both men were stark naked much to the astonishment of the intruder as Haft knocked over chairs with his erected member. But this is clearly a book lacking humour, notwithstanding the fact that the wrestling world abounds with classic, humourous stories and instances of ribs and pranks that wrestlers played on each other.

The author had the advantage of being privy to Burke’s unpublished autobiography which he references on numerous occasions and then sees fit to doubt the veracity of some of her writings. Burke’s manuscript apparently had been rejected by at least 30 publishers which raises many questions as to its worthiness since she was truly a legendary pioneer in the business

Leen concludes that Burke’s trailblazing contribution to wrestling has resulted in females finally gaining admittance to high school wrestling programs. He goes a step further by insinuating that a tour she made of Japan late in her career has served as a catalyst for the resulting popularity of wresting in that country.

Altogether this is a must read for wrestling historians and those enamoured with professional wrestling. Well written and well researched, it is an honest and forthright look at an important segment of American culture that hasn’t been taken as seriously as it perhaps should by society, if only because it has always been regarded as a dubious profession.

Leen becomes the latest in a long line of authors attempting to give some credence and recognition to those who gave their lives to pro wrestling and in this case it is the steely determination and doggedness of Mildred Burke that comes under close scrutiny.

Burke’s underdog battle to gain respectability is mentioned in the same light as two other Depression-era scrappers, the colt Seabiscuit and the Cinderella Man, boxer James J. Braddock. Both stories were featured in successful movies.

The Mildred Burke book is now a matter of record. Can a cinematic offering of her remarkable story be far behind?