If you were to watch the first five minutes of Kayfabe Commentaries’ YouShoot interview with Sabu, you might think you paid too much. 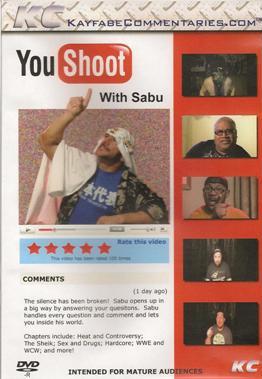 It’s not bad, it’s just Sabu hardly talking. Fortunately, it does get better as the questions keep flowing in and time goes on.

An example? One of the first questions a fan writes in is regarding the ECW November To Remember show in 1994 when Chris Benoit broke Sabu’s neck. Sabu’s response? “You had to bring that up? I try to forget that one. That sucked. My neck still hurts.” He then said even if Benoit didn’t do that to him, that he’d kick him in the nether regions.

Another fan “lathers Sabu’s ass,” according to moderator and Kayfabe Commentaries co-owner Sean Oliver, by calling Sabu every positive name in the book. Sabu recants with a “Sounds good!” remark.

Then again, this is how Sabu has always been portrayed in wrestling — a man of few words. He says it’s not a gimmick, but the way he really is, just like his uncle, The Sheik.

Sabu talks about his relationships with Paul Heyman and Taz and how they were once strained, but are now better. He also discusses how he wishes he could have had a program with Raven at some point after their one match in TNA.

Of course, as in 99.9 percent of shoot interviews, the topics of sex and drugs come into play. Sabu tells a story of how he once gave Sunny some Somas to flash him, how she tried to sleep with him while married to Chris Candido and about what he saw a rat do one night to Brian Lee. I’d explain this, but this is a PGish website.

There’s a segment in this DVD entitled “What’s In The Bag?” where moderator Oliver opens a gym bag and pulls out a variety of items — a syringe, bottle of pills, gimmicked bag of marijuana, etc. The object of the game is for Sabu to identify which wrestler he thinks of first when he sees each item. Not surprisingly, he says his own name a couple times and even rolls a joint for our viewing pleasure.

But this DVD also has more to it then the typical sex and drugs schtick. Sabu, via a fan, tells the story about one time at a restaurant in Philadelphia, the store employee said Sabu’s name wrong and he didn’t correct him by telling him his name was Terry.

And being that Sabu was an integral part of the inaugural, and arguably the only ECW, he fields questions on the locker room and the WWE version of ECW. The biggest point he makes about yesteryear and today’s WWE is that back in his heyday, guys wrestled for the love of it and for little or no cash. Nowadays, guys just do it for a paycheck, he added.

Sabu goes over his most gruesome injuries, tells the legendary super-glue wound-closing stories, a couple WCW and XPW tales, including how much he hated WCW, and which of today’s wrestlers would have been a good fit in the original ECW. The names he says might surprise you, with Samoa Joe being the one that most raised some eyebrows for me. It’s at this time that he slams indy wrestler Jack Evans a couple times, saying Evans needs to hit the gym.

Come to think of it, Evans would be a perfect YouShoot candidate to discuss the indy scene, Ring Of Honor, stuff like that. What do you think, Sean?

One part I especially liked is when Sabu answers a fan’s question about who the future of hardcore wrestling is. The fan suggests The Necro Butcher and Sabu disagrees. He says he wrestled for years as “Terry Nobody” and evolved into Sabu, a wrestler who wrestled first and foremost, and then took on the routine of breaking tables and using objects. Sabu notes that all Necro Butcher does is use objects. Good point.

Obviously, the chapter entitled “The Sheik” was of greatest interest to me. Detroit pride, baby. One fan asks if Sabu was scared of his uncle as a child. Sabu said his uncle’s character on screen wasn’t a character, that was the real person. He also said that no one that knows Sabu calls The Sheik by his real name. Sabu tells a quick story of Leon Spinks, The Sheik and himself in Japan, training sessions with Rob Van Dam and The Sheik, matches with his uncle and time and time again, reiterates that who The Sheik was in the ring was who he was away from the ring.

Another story Sabu tells is during the 1997 invasion angle when ECW invaded Raw. Apparently, backstage, The Sandman was talking real estate with Gorilla Monsoon. Sabu mentions, too, that the ECW guys were not well-received because they were a “family,” whereas the WWE (then WWF) guys were all against one another.

Other points of good discussion include Sabu once being billed as the son of Jimmy “Superfly” Snuka (really?!?), the only wrestler to ever refuse to take the Arabian Facebuster, how the triple-jump moonsault originated, why he feels Jerry “The King” Lawler is a racist, how the old FMW promotion influenced ECW and funny RVD stories.

And who knew some of the stories told in The Wrestler were based on Sabu? He explains, and also tells why he doesn’t like the movie.

The DVD closes with a “potpourri” section where Sabu gives his take on the September 11, 2001 terrorist attacks, how paranoid Vince McMahon was regarding Sabu wearing his ethnic headwear and what he does to relax — smoke weed, play with his dogs, take care of his mom and lift weights. Classic answer.

In watching this DVD a second time (it’s that good), I realized that not only is Sabu a straight-shooter, but though he’s shy, he tells a good story and sugarcoats nothing. He seems genuine in talking about guys like John Cena and Jeff Jarrett and doesn’t get rattled. You have to have respect for Sabu no matter how you look at it. He also apologizes for his stuttering (I barely noticed any stuttering) at the end, says he was nervous, and the DVD ends with Sabu and Oliver comparing broken hands.

Even though he doesn’t talk much (as compared to other shoots with other wrestlers), this DVD was an eye-opener for me as it showed a side of Sabu not everyone has ever seen, including a sense of humor. It’s a refreshing change from seeing the man risk it all in the ring to telling why he did it for so many years. Every wrestling fan needs this DVD, as well as the rest of the YouShoot series. It’ll be money well spent.