As far as Newfoundland’s Tom Hann is concerned, you can boo all you like; no sound could sound sweeter to his ears as he terrorizes the Western Canadian independent wrestling scene to rave reviews.

“I’d just like to say that I’m not here to try to make people believe in me. Just know there isn’t much difference between my day-to-day persona and my in-ring character. I am what I am, and for all of you that don’t like it, you can go to Hell!” the Corner Brook native declared. 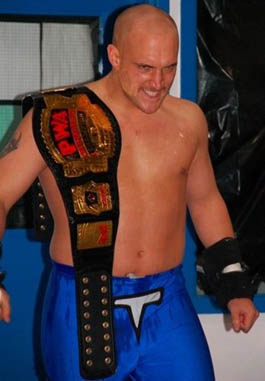 Hann recently got his first big break, appearing as Tom James in a match against Tyler Reks on last week’s edition of ECW.

“Even as someone in the business, I can easily get engrossed in his matches. Great talent,” Nevada said.

Hann’s wrestling origins began during his schooldays when he developed an interest in acting and drama, a strange contrast (except in wrestling) to his “lust for violence,” which grew while hanging around a rough crew in Corner Brook.

“So, when I got my first taste of wrestling from Monday Night Raw, I knew that this was the perfect industry for me,” Hann told SLAM! Wrestling. “Besides training with the local amateur wrestling team from time to time back home, I was never really an athlete until I decided I would actually take wrestling seriously and get trained to start a career.”

At 21, he travelled to Calgary, Alberta to train at Lance Storm’s Wrestling Academy.

“I would say that he is arguably the best kid to come out of that camp,” said Nevada.

Storm recalled Hann being one of the standouts of the June 2006 class.

“I’m a big supporter of T-Bone’s. T-Bone is the kind of guy that jumps off the page at you, and I mean that in a good way. I often joke that he is just on the right side of crazy to make it in this business,” Storm said. “Charisma/personality is such a big part of this business, and likely the one element that you can’t teach. And T-Bone has it in spades. On top of that, he has a lot of ability too and is a very solid worker.”

“When you’re on a training schedule like that, it doesn’t take long to weed out the guys who have a real passion for the business, and the guys who flat out don’t have a chance,” Hann said. “Lance is a master at ring psychology and an extreme athlete even today at 40 years old, so I made it a point to be like a sponge and absorb every little piece of advice he had to offer.”

Early on, he pulled out one of his nicknames from back home: “T-Bone.”

“In SWA, we practice promos every week, and in my very first promo I called myself ‘T-Bone’ just to try. After that, it stuck to the lips of Lance and the rest of the boys every time they referred to me, therefore I booked it in my first match,” Hann said.

After graduating, he continued to train at B.J.’s Gym (where he continues to drop in) in downtown Calgary under “Ravenous” Randy Myers, who recently signed a developmental deal with WWE.

In 2007, Hann embarked on Tony Condello’s Northern Death Tour and apparently liked it enough to plan to do it again this year, that is, if his schedule stays open in February. It was there that he met Krysta Lynn Scott, who has since teamed up with him at Edmonton, Alberta-based Prairie Wrestling Alliance (PWA).

“I met Tom in February 2007 when he picked me up to go to the Greyhound station for our first Death Tour experience,” she said. “We were both in the same boat being from the East Coast, and not really sure what to expect from the tour, so we bonded immediately and have been close friends ever since.”

Hann has wrestled in every province from British Columbia to Ontario, and helped Scott adapt to the west.

“I was brand new to the territory and he said he would help me out and introduce me to everyone,” she said. “He went above and beyond to do anything and everything he could to help me break into the territory. Honestly, without his help, I am not sure I would still be out west.”

Scott called Hann her favourite tag partner and credited him for his ability to “make everything go so smooth, and always seeming to know the right direction to take the match.”

“T-Bone is one of the most professional guys I’ve had the chance to work with. Whenever I get told I’m wrestling with him on a show I am happy, because I know that we work well together and can always put on a good show with no problems,” Blaze said, adding he has enjoyed every match they have had. “He’s tough and he’ll let you kick his ass, but also give it right back. If I had to describe T-Bone in only a few words, they would be, ‘The Absolute Professional.'” 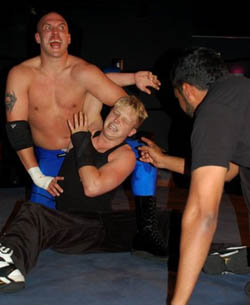 In spite of bulking up to 225 pounds from around 205 a couple years back, Hann holds the PWA’s Cruiserweight Championship.

“I’m not a cruiserweight in the company, but hold the Championship and Cruiserweight Division hostage until they give me my rightful shot at the Heavyweight Championship, and I take my place as top heel of Alberta,” Hann said in true antagonistic fashion.

Alberta has been something of an adopted home province for Hann, who has also worked with promotions like Stampede Wrestling and Power Zone Wrestling (PWZ). He had an acrimonious split with PZW after rising through its tag ranks, and owner Tim Strom said he would not be booking Hann in the future.

“I resigned from that company months ago, leaving the tag team of Rampage over and done with,” Hann said. “PZW pushed us as the top tag team, but chose not to endorse any Tag Team Championship belts.”

Since moving on to PZW’s rival, PWA, Hann has assumed the Jack Sloan gimmick.

“When I first started taking bookings, the promoter wouldn’t book me if I didn’t come up with an actual name besides just ‘T-Bone’. He said, ‘No one here wrestles under just one name!’ But at the time there was Juggernaut, Apocalypse, and a few more with just one name. So I just thought it was a rib and didn’t pay any attention to it. But just before my first show with PWA, he said he wasn’t going to book me without a name, so my buddy Griz came up with Jack Sloan on the spot so he would book me. Turns out he was serious about the name and I owe Griz one.” 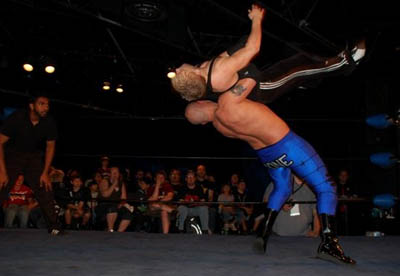 Hann’s career goals are straightforward enough: make a living in the wrestling business.

“I plan to hit Canada’s Maritimes scene, and hopefully wrestle in Europe and the USA in the near future. The ultimate goal is to get a full-time job with a company, and to be known around the world for doing what I love to do — entertain.”

“He is by far one of the most talented, respected and dedicated heels in this territory. He has the drive and the knowledge to make it as far as he wants in wrestling,” said Scott.

Storm felt Hann’s gifts could take him far, perhaps even to a more permanent gig in New York.

“‘T’ isn’t the biggest guy, which will make WWE a harder sell, but if he continues to work in the gym, I think he has the talent and natural personality to fit in well there eventually,” Storm said. “There are three main elements to making it in this business: ability, personality, and body. T-Bone has a lot of the first two, and his body is sort of neutral, in that, he is not big yet, but not small either. If he continues to work in the gym, he’ll have the hat trick.”

Although WWE will always prefer big men, Storm believed the company is “open to anyone who has talent and personality.”

“I think they are more interested in finding new and different people with potential than just focussing on pure size, so yeah, I think T-Bone has a chance,” Storm said. “It’s a long shot as it is for everyone, but there is a chance out there if he works hard enough.”