‘Young Rock’ Episode Four: Are you ready for some football? 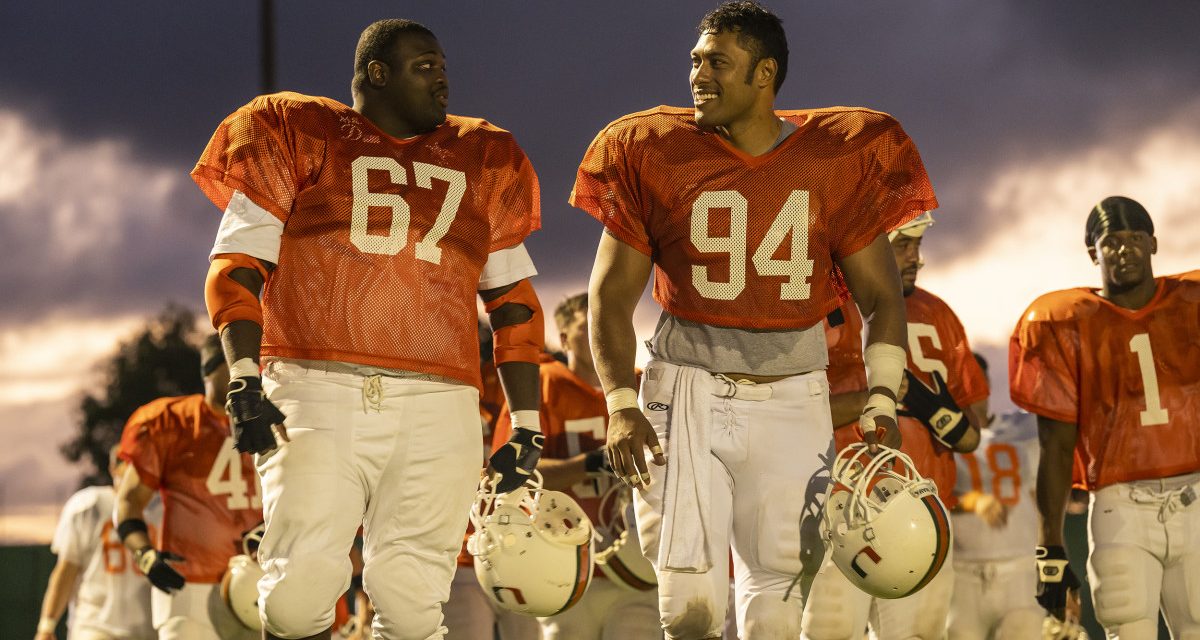 It feels like a lifetime since we’ve seen Uli Latukefu playing the role of 20-ish-year-old Dwayne Johnson in the series premiere of NBC’s Young Rock. Well, it’s actually been three lifetimes, as the series has been focusing on Johnson at ten years old (played by Adrian Groulx), fifteen years old (played by Bradley Constant), and the future version of Johnson, running for President in the year 2032.

Much of the focus of the show thus far has been on the all-encompassing role that wrestling played in Johnson’s youth. With his father Rocky Johnson (played by Joseph Lee Anderson) working in the ring, and his grandmother Lia Maivia (played by Ana Tuisila) working behind the scenes running her promotion, this is not surprising.

Yet, as Johnson was coming of age in the very early 1990s, his entry into the wrestling business was not necesarily pre-determined. As the episode details, Johnson arrives in the University of Miami’s locker room eager to land a spot on The Hurricanes football team. One thing that was clear: the swagger that would eventually propel the future People’s Champion to the top of the wrestling world was inside him even in university. 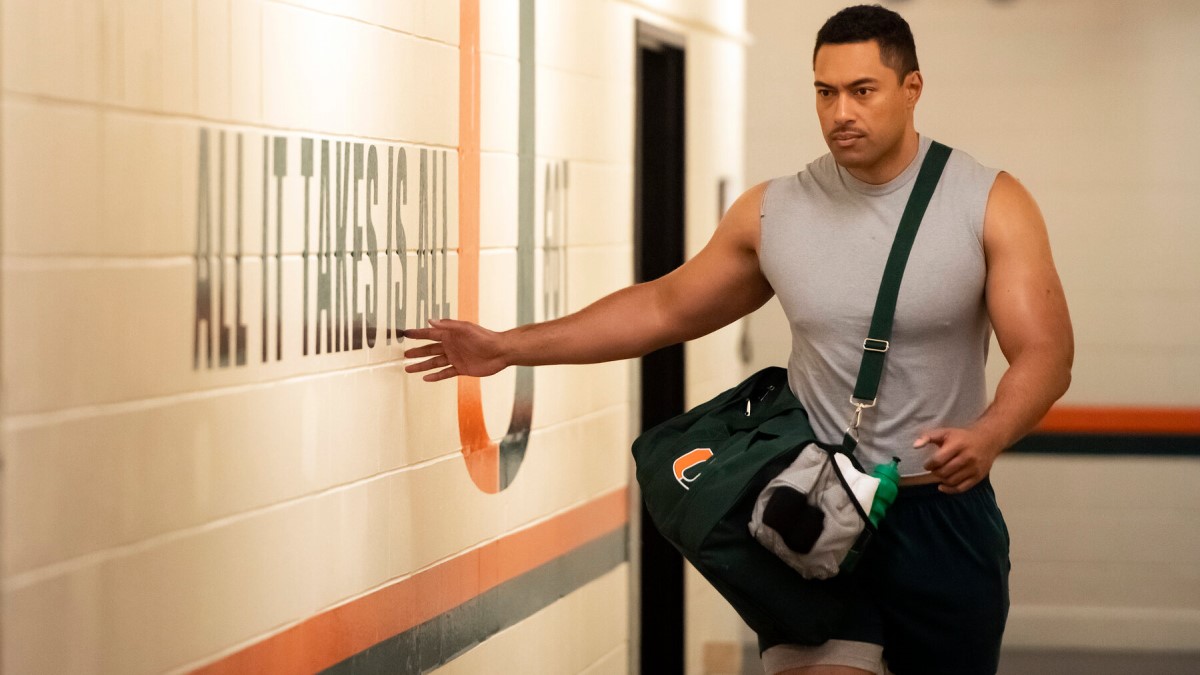 Latukefu, as Johnson, arrives at The University of Miami in the premiere episode of Young Rock. Photo: NBC/Universal

Episode four begins with future Dwayne Johnson looking back on his youth, as is customary for every episode thus far. This time he’s on a show hosted by sports broadcaster and former NBA star Kenny Smith, discussing young athletes and the challenges they face. Wouldn’t you know it — Johnson has some stories about just that.

Setting the scene for the Johnson family in the early 90s: Rocky is doing delivery work; Ata (Stacey Leilua) is primarily busy, according to Dwayne, with “worrying about him”; and Lia is destitute in Samoa — with a promise of more to come with that story.

Young Dwayne’s plan: to get drafted by the NFL and take care of his parents. He arrives on the football field eager to impress, and is even a little starstruck by celebrities on the sidelines: Uncle Luke of 2 Live Crew, Cheech Marin, and Michael Irvin.

With Coach Orgeron uttering his now-famous “Candy Ass” character description, which Johnson would himself put to much use in his future, Dwayne makes an impression during the opening drills. This leads to an invite by Uncle Luke to his house party, and teammate Russell Maryland (played by Wavyy Jonez) warns his new teammate to “dress to impress”. 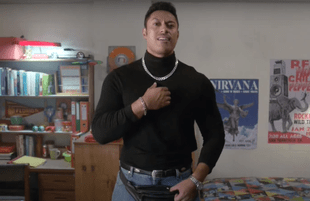 Paying tribute to the eventually famous 1997 Toronto Sun photo of Johnson — well, The Rock — actually, Rocky Maivia — as the pin-up SUNshine Boy, Latukefu sports the fanny pack, silver chain, turtleneck, and raised eyebrow that will give your ego the boost you need before hitting any party.

Young Rock, however, is still not all about Dwayne. With Rocky and Ata now empty-nesters, Rocky is seeking adventures while Ata is engaging in some long-distance motherly worrying. When Dwayne sends them a new TV that he got on layaway as part of his promise to take care of them, Rocky is ecstatic while Ata is worried that he’s overdoing it. It’s a classic trope of a father and mother’s reactions, but it works and is believable here.

Not long afterwards, though, Anderson and Leilua get to stretch their acting chops a bit more after Johnson suffers a devastating injury at practice. The story is well known, so this isn’t exactly a spoiler: Johnson was running drills against Mario Cristobal, and Johnson came out on the losing end with a torn-up shoulder that put him on the sidelines for the year.

Interestingly, as the injury occured in the show, Cristobal was painted in a definite heel manner, but he has a conversation with Johnson later that paid tribute to the friends that they would become in real life.

Johnson spirals downwards after the injury: shirking school and team meetings before heading home as an escape. At first, Ata is overjoyed to see him (and feed him), but she soon notices that her son is not himself. She urges Rocky to find out what’s wrong.

In a short but impressive scene, Anderson turns the dial down on his portrayal of Rocky Johnson as he helps get Dwayne’s perspective back on track. It’s striking how Anderson, who is in fact junior to Latukefu, plays beyond his years and carries himself like a man with worldly experience.

There’s one last nice touch to the episode, which brings one of the main characters back in the 2032 time to speak to Johnson, but this time played by the real person. Either Dwayne Johnson’s acting is improving exponentially or he was genuinely touched by the moment. I’d bet on the latter (no offense to Dwayne). Check out the episode to see who it is.

While the show has been playing a little fast and loose with the wrestling history that it has presented, it plays the first part of the football story of Johnson’s life pretty by the book. That checks out, as wrestling history is, in fact, fast and loose anyway. That approach does, nonetheless, provide a greater anchor to authenticity in this episode.

Football continues to play a big role in Johnson’s life. After the re-launched version of Vince McMahon‘s XFL struggled during its inaugural season in 2020, Johnson and Dany Garcia, formerly married and longtime business partners, led a group in purchasing the league. 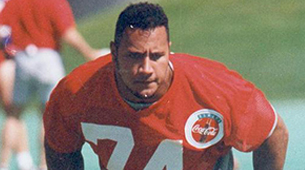 Johnson looking to make it in the CFL with the B.C. Lions. Photo: CFL.ca

Johnson recently created a bit of a stir (mostly north of the border) when he floated the idea of a partnership between the XFL and the Canadian Football League, where Johnson briefly played in 1995 for the B.C. Lions. The CFL website actually features its own Dwayne Johnson story archive, which does indeed show that Johnson has kept a place for the Canadian league in his heart over the years.

For what it’s worth, it’s more impressive than the image-less player info page granted to Johnson by the University of Miami.

So now we can expect that the show has found its full rhythm. Next week should feature 15-year-old Dwayne in his most awkward years and a car full of Karens, as seen in the second episode.

Then again, maybe it’s time for a swerve. Tune in next week to find out!