Joel Deaton is proof that hard work pays off 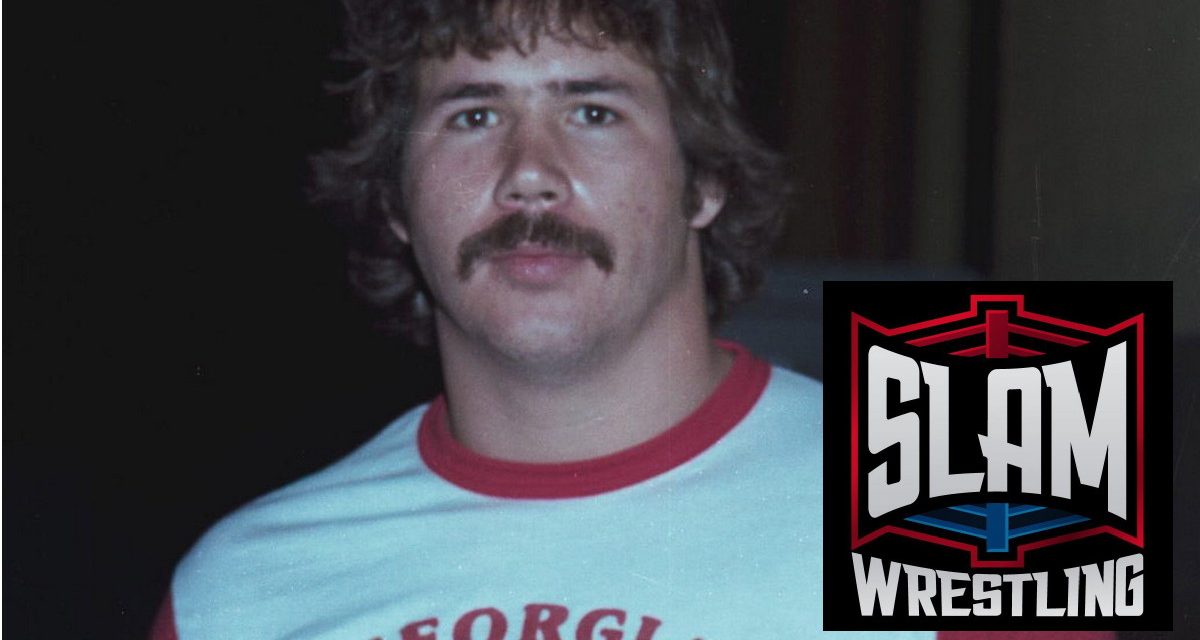 Joel Deaton, one of the longest-lasting pro wrestlers of the territories era, will be honored at a Championship Wrestling from Florida Legends Lunch. The event takes place on February 26th in Tampa, Florida, is closed to fans. In preparation for the event, Slam! Wrestling reached out to the 63-year-old Deaton (real name Joel Lofton Jones) to talk about his career accomplishments. He’s especially proud of this honor, given the breadth of great wrestlers that, in his mind, came through the Florida territory during the pre-Hulkamania years.

Throughout his near-30-year career, Deaton wrestled under various names and for different promoters. One of his earliest personalities was “Thunderfoot,” a name bestowed upon him by Dusty Rhodes. His main gimmick saw him ‘load’ his boot with something heavy and then kick his opponents in the head. This led him to many victories throughout the early 1980s.

He also spent some time teaming with his “brother” David Deaton as the Deatons, mainly around Florida. (David Deaton was his real name, and he died in October 2012.). The Thunderfoots were a team too, and the other masked figure was Gene Ligon. 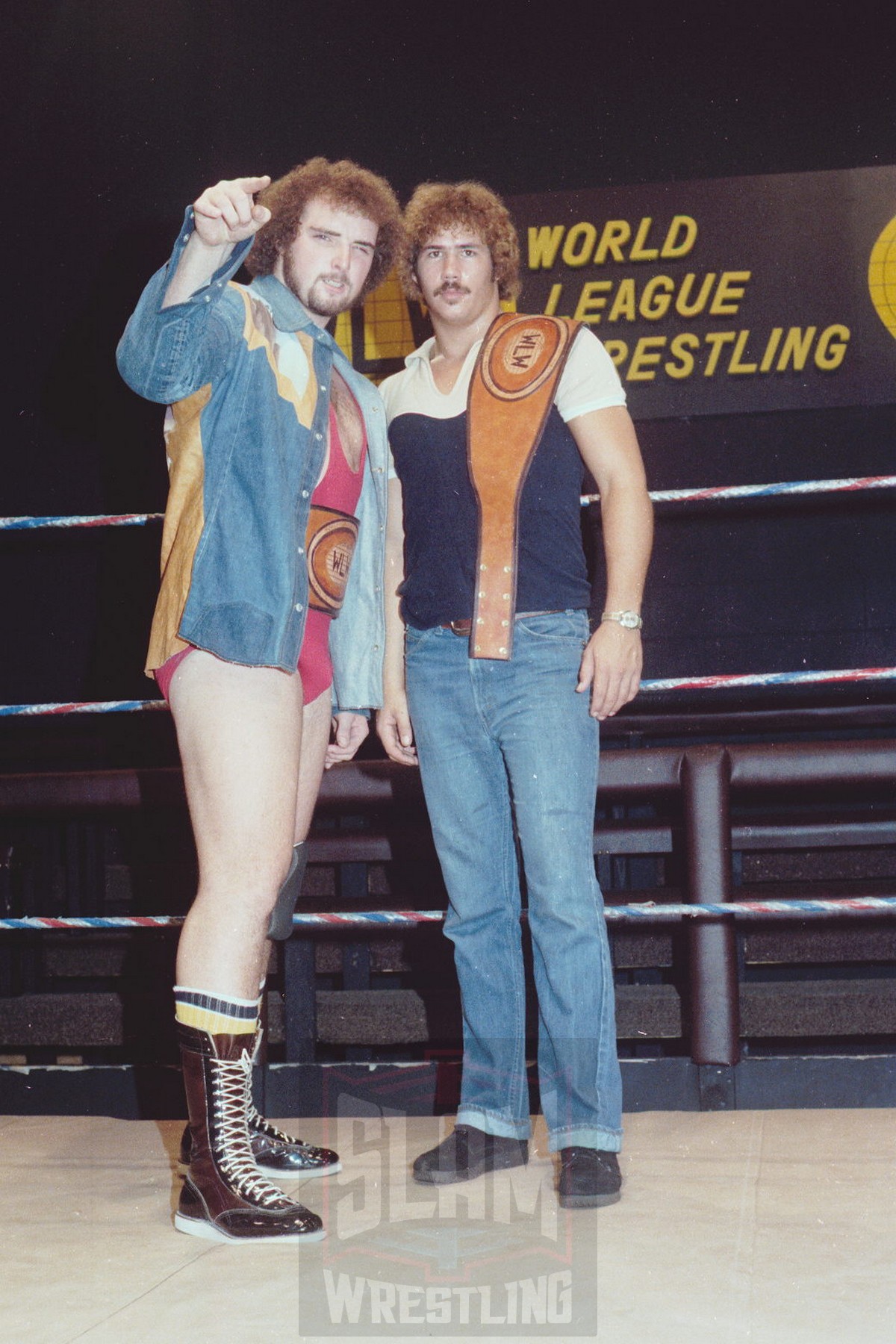 But working under an interesting gimmick wasn’t Deaton’s biggest claim to fame. Instead, the 6-foot-5, 287-pound Deaton is most proud of the fact that he was able to find steady, consistent work in the wrestling business for over three decades. In that timespan, Deaton has either teamed with or fought against a real who’s who of professional wrestling. Some of these include: André the Giant, Ricky ‘The Dragon’ Steamboat, Brian Pillman, Dynamite Kid, Antonio Inoki, Jack and Jerry Brisco, just to name a few. He also managed to be one of the few gaijins/foreigners to have a lengthy career in All Japan Pro-Wrestling (AJPW), which was once the home of some of the best in-ring pro wrestling in history. And Deaton had nothing but praise for AJPW as a company and the culture the wrestlers promoted.

Deaton told a story of how he first met then-AJPW owner Shohei ‘Giant’ Baba in Baltimore, Maryland, in 1987 for the Jim Crockett Memorial Tag Team Tournament. While in the locker room, Deaton’s partner that night introduced him to Baba and Deaton asked Baba if he’d consider booking him on a tour. Baba agreed, and within a few months, Deaton found himself working in All Japan.

“My first tour of Japan was great,” Deaton told SlamWrestling.net. “It opened up a whole new ball game for me. Baba liked my work enough to book me on 23 tours, which led to 500 matches for me in Japan.”

Deaton spent much of the 1990s wrestling in AJPW, teaming with some of the top foreigners the promotion had at the time. Since AJPW was mostly a tag team territory (save for an annual March-April singles tournament and odd singles matches scattered throughout the year), the majority of his matches saw him teaming with Stan ‘The Lariat’ Hansen, whom he called “a 300-pound bull that never tired.” On other occasions, he teamed with the likes of ‘Dr. Death’ Steve Williams, Terry Gordy, Gordy nephew Richard Slinger, and Tracy Smothers. And even though Deaton’s career in AJPW didn’t yield much in the way of title success, he was and still is incredibly proud of his accomplishments over there. He is happy to have had the pleasure of teaming with those aforementioned gaijins and being in the ring with the likes of Mitsuharu Misawa, Toshiaki Kawada, Akira Taue, Jumbo Tsuruta, and Kenta Kobashi, the latter being someone he had a direct role in training. 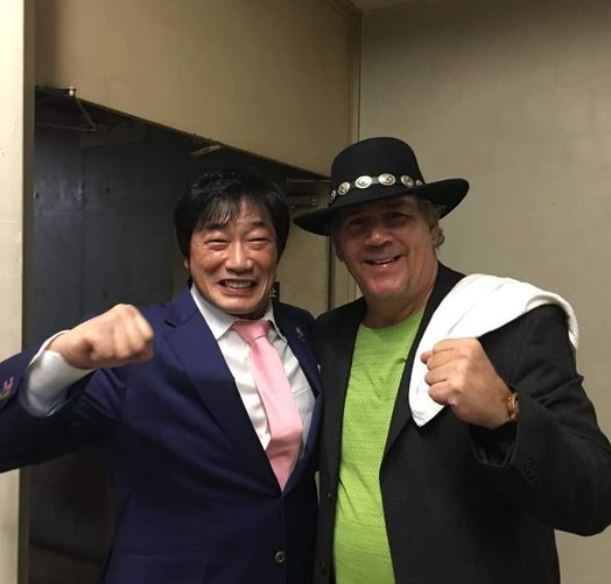 Deaton’s praise for Japan wasn’t just because he shared the ring with some genuine historic greats. He also loved the culture and how he was treated as an athlete. Even though he was a lower-card wrestler, Deaton was given ample opportunity to show his fighting spirit. To that end, even in lower-card matches he would get plenty of offense in. It didn’t matter if he was facing a lower-carder or a main-eventer; they sold for him as much as he sold for them. And the audience respected and admired this.

“They [the fans] are smart; they can tell when you’re trying. If they can see you’re trying your best, win lose or draw, they’re gonna respect you. It was so great on so many levels.” 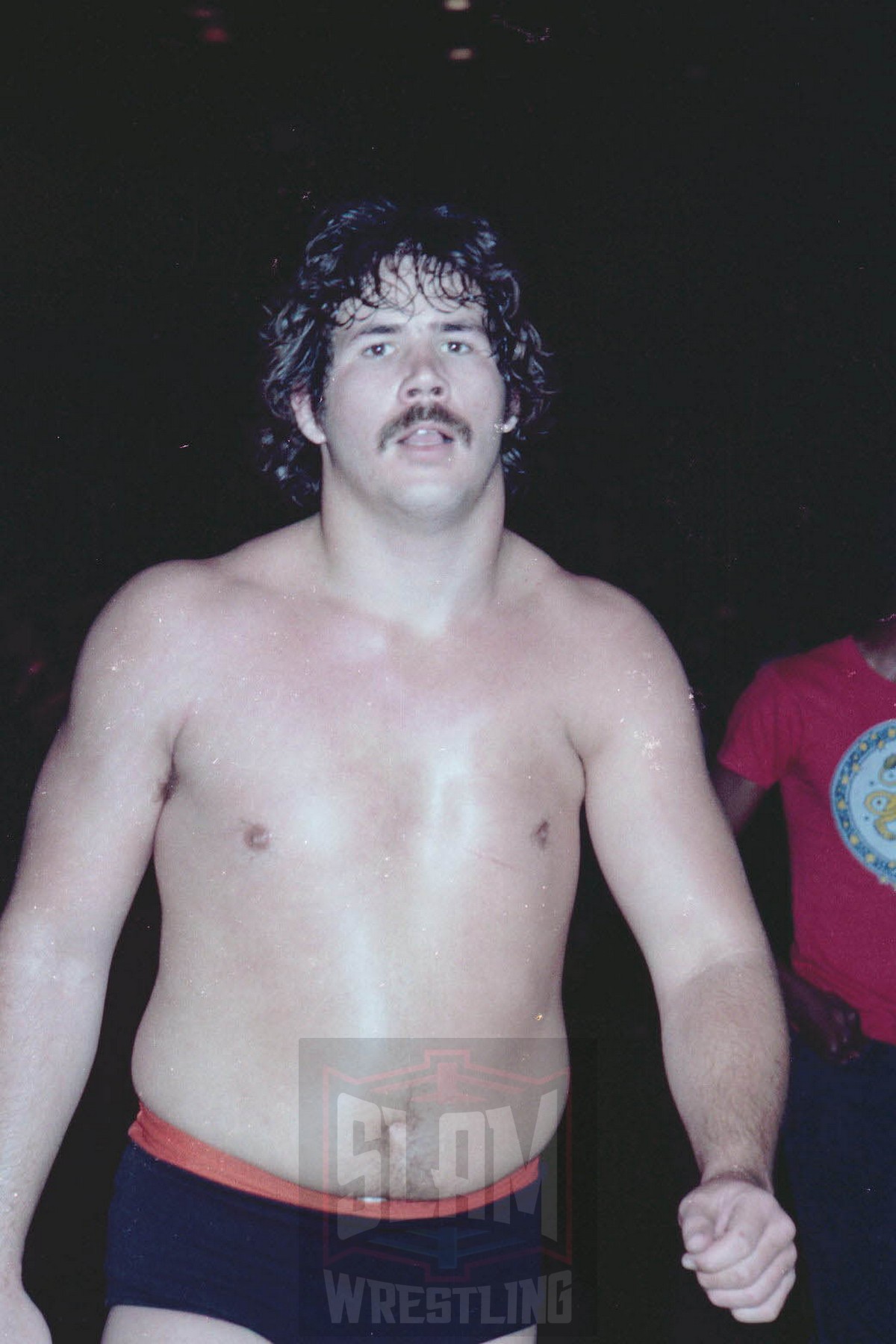 Deaton credits his time in Japan for turning him into a more polished wrestler. He was exposed to many fulltime AJPW wrestlers that were that way, and that ended up rubbing off on him. He praised Giant Baba for having such confidence in him and confirmed a long-standing story that Baba just might be the best and most respected booker/promoter in pro wrestling history. To Deaton, Baba wasn’t just a smart booker in terms of creative direction, he also treated those that wrestled for him incredibly well. Baba let wrestlers, including Deaton, be all that they could be and encouraged them to show as much offense as possible. They were also always put in the top hotels, received generous payments, and had guarantees that they would always get paid. And yet, not everyone that came on one tour would be there for the next one. But Deaton managed to become a regular on those AJPW tours for ten years. It wasn’t a surprise to learn that Baba had a reputation whereby a handshake deal with him was worth more than a written contract.

Of course, Deaton had to prove his agreement’s worth by working incredibly hard for Baba. He had to wrestle at a very high level, often against wrestlers that fought in a very stiff style. But Deaton and his AJPW colleagues weren’t stiff and reckless; instead, they wrestled in a style that somehow managed to be both stiff and safe.

As the 1990s progressed, Deaton began balancing AJPW tours with more work in the United States. Thanks to his time with Baba, he was able to find consistent work throughout the United States (and especially in Florida) until well into the 21st century. According to Deaton, his time and work in Japan earned him immense respect from his peers stateside, which in turn led to more people wanting to work with him.

“Was I ever a superstar? No I wasn’t. But I kept a job for almost 30 years and that’s all I ever did my whole life. Wrestling has been all my life. I feel good that people remember that maybe I’m worth it. I want to thank all the fans in the United States and in Japan. Whether I was good or bad, they always hung with me and I always tried to give them their money’s worth. I always took wrestling very seriously. I didn’t want people to laugh at me for anything I did. Believe me when I say this: wrestling is one of the most real things I have ever done. Because there’s no room for error, it’s so easy to get hurt, and none of that’s fake.” 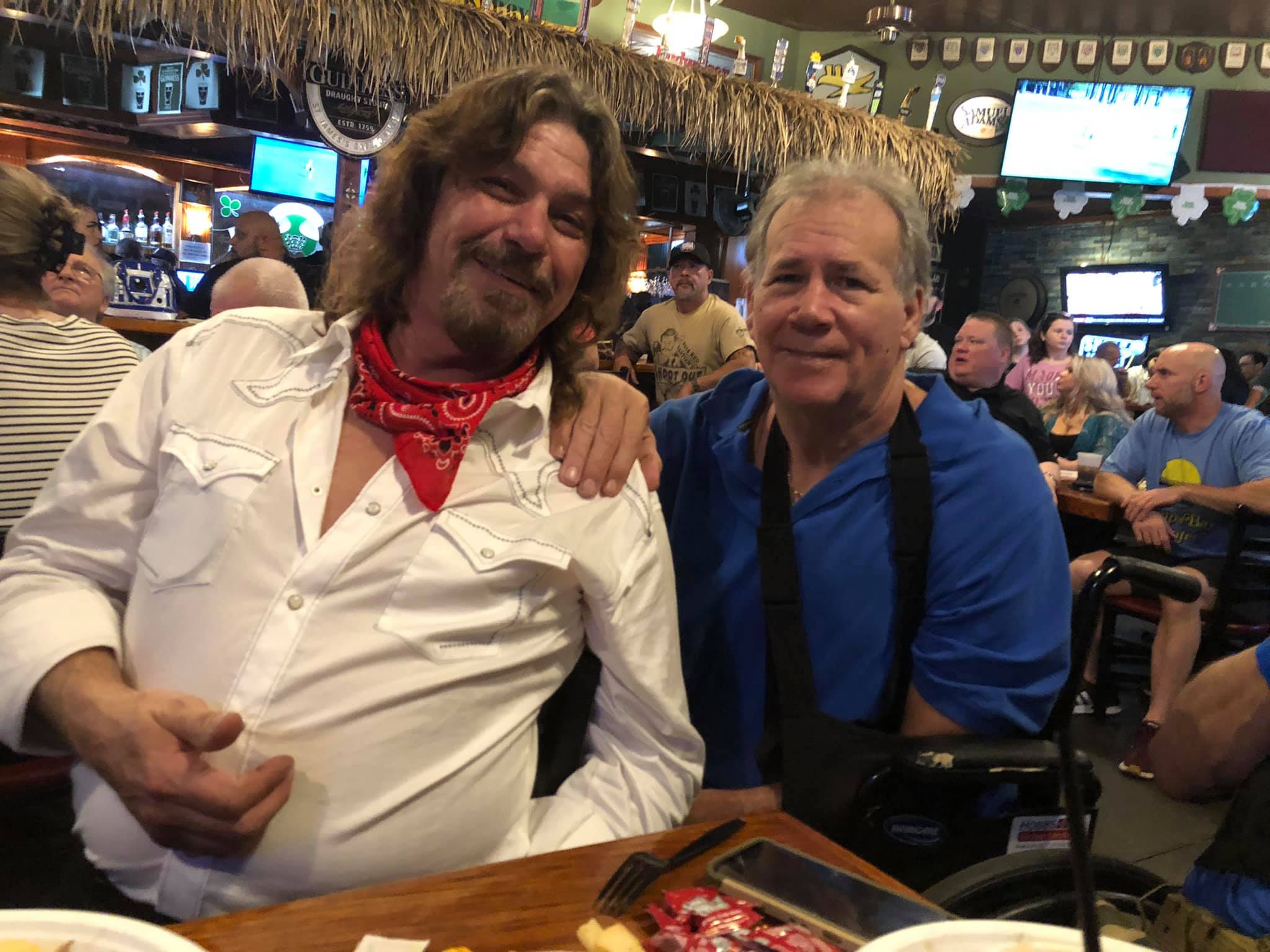 Sam Houston and Joel Deaton at a Florida Legends Lunch in November 2020.

Not long after attending the Cauliflower Alley Club reunion in May 2019, Deaton suffered a debilitating stroke, but, like his countless in-ring battles, he has battled back, to the point his big moment at the upcoming Florida Legends Lunch (pandemic permitting) will be another victory.

EDITOR’S NOTE: Post-publication, the cutline on the WLW photo was changed to Georgia from Florida, and the photo credit fixed.