The legacy of Giant Baba

No one had any idea on September 30, 1959 what was going to happen. It was just a normal Japanese Wrestling Association card featuring the same old wrestler the fans saw each week, but this card was just a little different. Shohei Baba and Antonio Inoki made their debuts on this card. Baba would go on to defeat Yonetaro Tanaka that night. Baba and Inoki went on to dominate Japanese wrestling over the next twenty years. 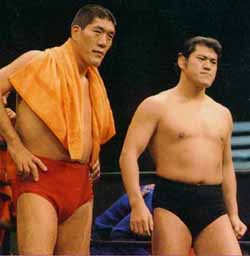 Baba was no everyday man. He stood 6’10” and almost 300 lbs. He was born on January 23, 1938. Baba had to take a serious role only four years into his career, though. His size needed to be two-sided after the death of Japanese star Rikidozan in 1963. He role needed to fit his height to keep Japanese Wrestling Association alive, and he did. He led the charge of the organization through the ’60s and into the early ’70s.

The death of Rikidozan saw the vacancy of the NWA International title. Two years after Rikidozan’s death, Baba would win the title by defeating Dick the Bruiser in Osaka, Jana. It was the first major title Baba would hold. Antonio Inoki and Baba were best friends in the business, and they used their friendship to take some tag team titles along the way. They took their first of four NWA International Tag Team titles in 1966 when they defeated Bill Watts and Tarzan Tyler.

In 1972, Baba started All Japan Pro Wrestling after a dispute with JWA officials. Baba had quit the organization he dominated by winning six JWA World League tournaments. The move would be a wise one, as All Japan would go on to become one of the biggest organizations over the next few years.

One of the first moves by Baba was the growth of international stars visiting his company. The first major event took place when Baba defeated The Destroyer on December 19, 1972. The win had a stipulation that The Destroyer had to become a full-time wrestler in Japan for five years. The Destroyer marked the first U.S. wrestling star to wrestler full-time in Japan.

The United States would begin hearing more about Baba starting in the early 70s as result of him brining stars to his company. Nicknamed “Touyou no Kyojin” in Japan which means “Giant of the Orient,” he received the nickname “Giant” in the U.S. The Destroyer, Bruno Sammartino and the Funk Brothers, who were all often visitors to Japan, began to help Baba gain acceptance in the U.S.

During a 1974 visit to Japan, NWA World titleholder Jack Brisco would lose the title to Baba. Brisco would regain that title just seven days later in Tokyo, but the exchange stated that All Japan and Baba had became a good partner for the NWA. Baba would go on to win the title a couple more times later in his career, and he was remembered as the first NWA World champion not only from Asia but also the first to win the title outside North America.

Just one year earlier, Baba took the PWF heavyweight title. It was the major title of the newly formed All Japan organization. The title would go on to be a cornerstone of the All Japan Triple Crown. The belt was awarded to Baba after a series of ten matches that are still talked about today as legendary and classic. The matches took place in one night on February 27, 1973. He won eight matches, lost zero and two went to a draw. He beat such stars as Bruno Sammartino, Terry Funk, Abdullah the Butcher, Pat O’Connor, Bobo Brazil, Don Leo Jonathon, Wilbur Snyder and The Destroyer. That night saw Baba prove to most wrestlers and fans that he was the number one wrestler in the world.

Sammartino would return to Japan in 1975 to put his WWWF World title against Baba’s PWF heavyweight title. It marked the first time the WWWF title was defended in Japan, and the match saw the two men wrestle to a draw.

Baba and Inoki had grown apart over the years. The two were heading up rival promotions (Inoki was in New Japan Wrestling), and the two were often competing for talent and fans. On August 26, 1978, however, the two put aside their differences and tagged up for a match against Tiger Jeet Singh and Abdullah the Butcher in Tokyo, Japan. The match saw four of the most popular international names in one match. Inoki and Baba won the match.

The two would start their feud again when Baba signs Stan Hanson from New Japan in 1981. The signing would cause Inoki to cause a long dissention between himself and Baba. All-Japan would later bond with Japan Wrestling Promotion, and New Japan would continue to suffer more. The joint venture saw All-Japan gain such stars as Riki Choshu, Kuniaki Kobayashi and Masa Saito.

Baba’s life was mostly behind the curtains in the 1990s. He worked very little in the ring because of his aging body, but when he did it would guarantee a sell out. Baba’s career would even last past Inoki’s. Inoki retirement in 1998 did not stop Baba. He wrestled till his death.

January 31, 1999, marked a dark day in wrestling history. Just days after celebrating his 61st birthday, Baba would die after complication from bowel cancer.