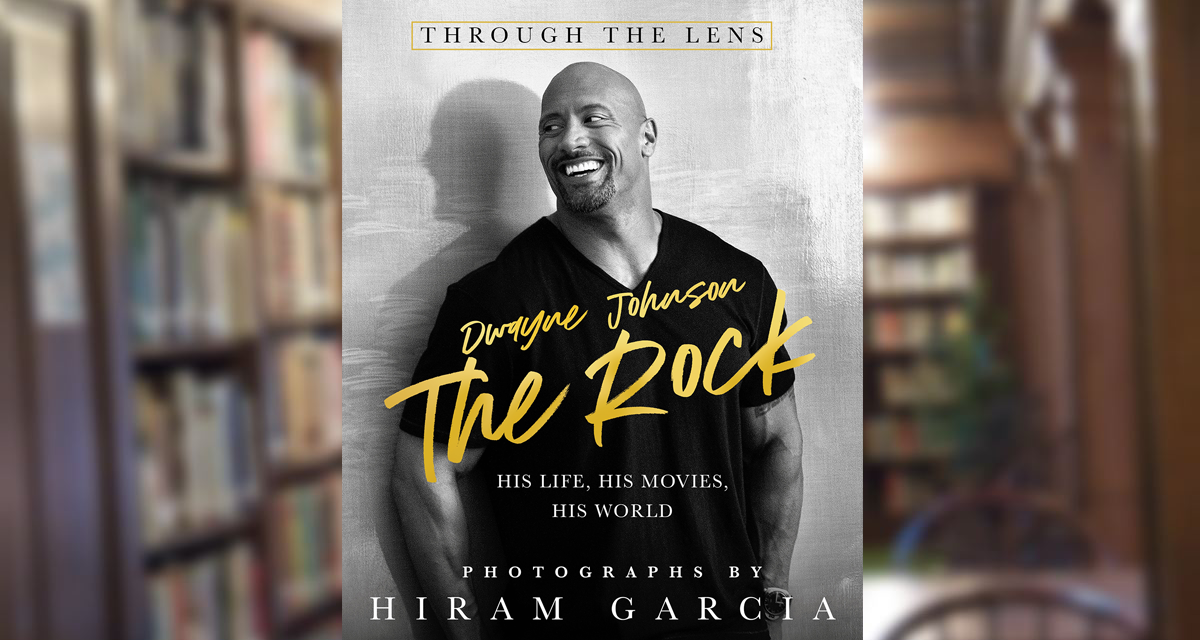 I really hope SlamWrestling.net readers appreciate the efforts that us writers make for them. Just recently, I had to spend a portion of my Saturday away from my family so I could thoroughly review the new photo book on Dwayne “The Rock” Johnson. My plight reminded me of the time Slam Producer, Greg Oliver, had to review the WWE’s Divas Uncovered photo book. (It’s worth a read. Well Oliver’s review article is, not the Diva’s photo book itself, as I believe it is the only time the words “stroke book,” has been uttered in a Slam article. Many thanks to Oliver’s wife and fellow scribe, Meredith Renwick, for the on point, apt and hilarious description!) Oh, the sacrifices we make for you, dear readers! 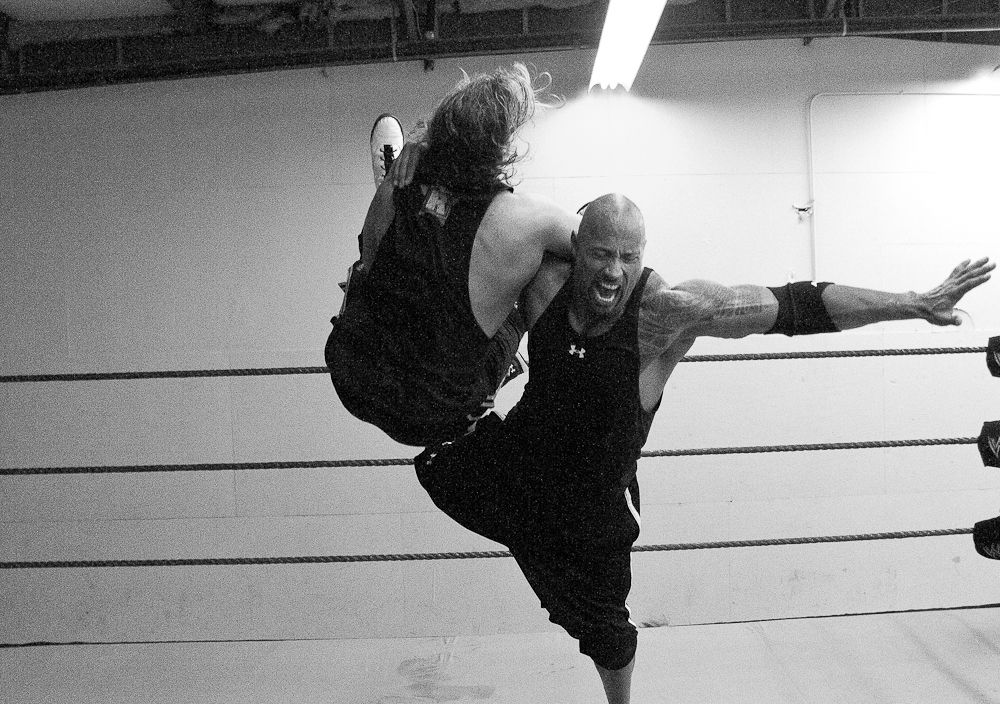 Caption from the book: In the wrestling business, every performer has a special finishing move. DJ’s is “The Rock Bottom.” In this snap, he’s delivering his iconic finisher to a sparring partner as he trained in 2012 to get back into the WWE ring.

But I digress, the book The Rock: Through the Lens: His Life, His Movies, His World is by Hiram Garcia and is out now from St. Martin’s Press. Garcia is the brother of Dany Garcia, Johnson’s ex-wife who also co-founded Seven Bucks Production with him. (You may have heard that these two also recently purchased the XFL! We could all learn a lot about getting along with an ex from them too!) Along with his penchant for photography, Hiram is a film/television producer and president of production at Seven Bucks. According to the book’s press release, Garcia has used his unprecedented access to “The Great One,” whom he refers to as DJ throughout the book, to amass a plethora of photos, “most of them never before seen and taken over two decades.”

At just under 250 pages, the book features a slew of photos with captions (although this book worm would have welcomed much more text) to accompany them and is broken into three parts: “In His Life,” “In His Movies,” and “In His World.” In part one, readers get a glimpse of the personal life of the man behind “The Rock” persona and the reigning world’s highest-paid actor for the second year in a row. There’s plenty of candid and more structured family photos. One of the most poignant photos has Johnson writing a eulogy for his late father, Rocky Johnson, on a flight to his memorial service.

The second part of the book features photos from Johnson’s various movie roles including Journey 2: The Mysterious Island, Rampage, Hobbs & Shaw, Jungle Cruise, Pain and Gain, Skyscraper, Baywatch, Hercules and the Jumanji films. There’s plenty of celebrity cameos here too. Don’t think I don’t see you there Idris Elba! Swoon! And being a fan of Jumanji: The Next Level, which I highly recommend just to see the various players doing their best Danny DeVito impressions alone, I was appreciative that there were a couple of pics with Johnson and the comic actor. 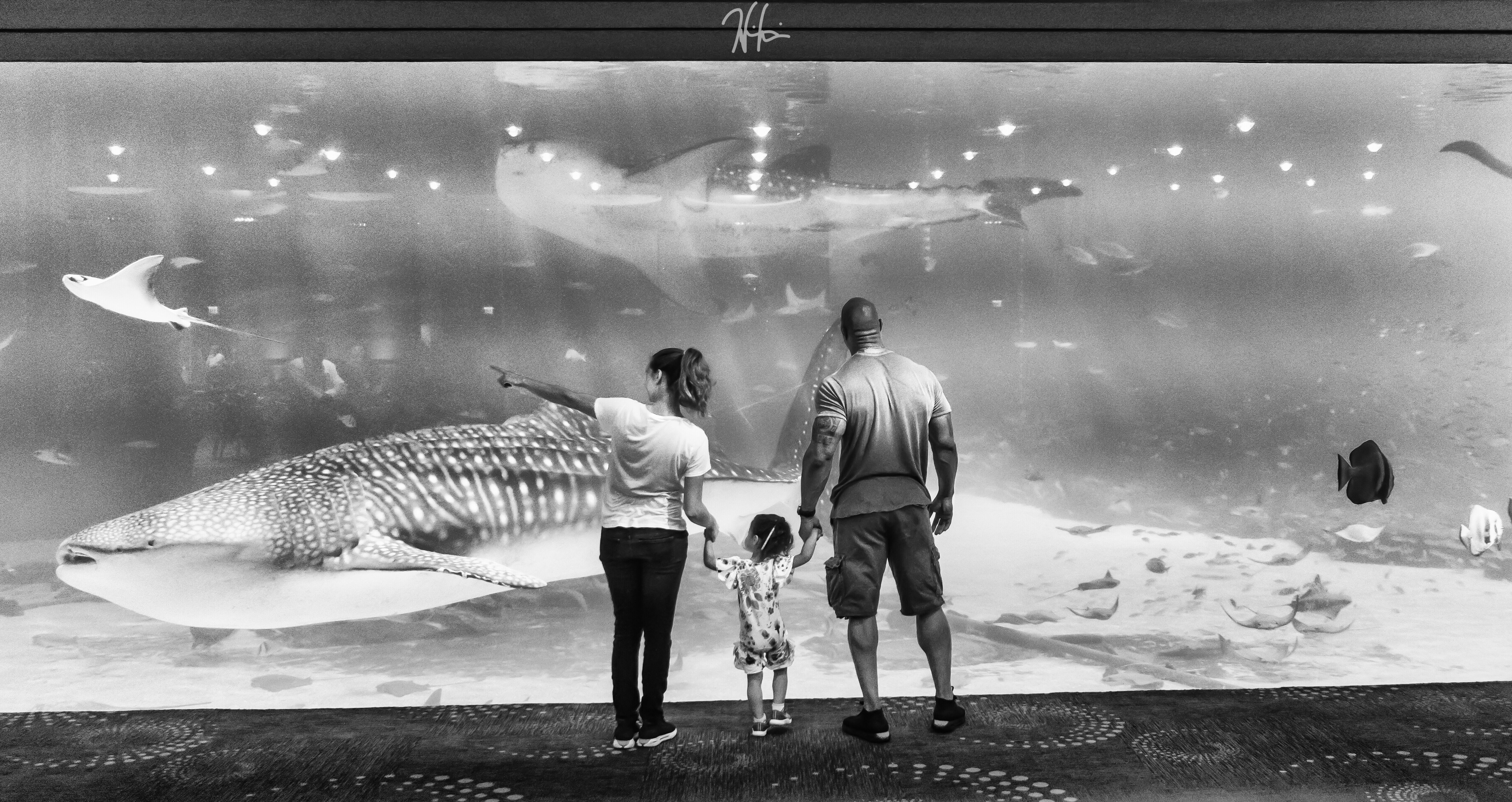 Caption from the book: I (Hiram Garcia) wasn’t planning to shoot anything on the day I joined DJ, Lauren (Johnson’s wife) and Jasmine (their daughter) at the Georgia Aquarium in Atlanta, but when I saw them in front of this tank that dwarfs even The Rock, I was glad I had my Leica with me.

The third part of the book focuses on fame, fandom and what it must be like to be one of the most recognizable stars in the world today. And let’s face it, this photo book is the only insight for the majority of us normals! And as a lifelong Saturday Night Live viewer, a show Johnson has hosted five times, I marked out at Garcia’s photo of the writers pitching sketch ideas at a meeting in show creator, Lorne Michaels’, office!

Now for those readers who are also pro wrestling fans, I have to “layeth the smackdown” here. So, the book does indeed have some photos of Johnson inside the squared circle, training and with fellow pro wrestling figures: Vince McMahon, Brock Lesnar and Roman Reigns. But it must be noted that Johnson’s pro wrestling days are not the focal point of the book. I, for one, would have enjoyed a part four to the book (maybe called “In His Ring”?) focusing on Johnson’s time with World Wrestling Entertainment (WWE).

So, buyer beware: this photo book is definitely more for hardcore Johnson fans who enjoy all the facets of him. But even though I wouldn’t consider myself one of these die-hard fans akin to Tres Dean, who wrote 2019’s For Your Consideration: Dwayne “The Rock” Johnson, and I’m definitely not as skilled in photography as frequent Slam photographer, Andrea Kellaway, I can still respect Garcia’s skills and vision. While this isn’t a book I would have honestly sought out to purchase for myself, Garcia has passionately pulled back the proverbial curtain on all things Dwayne Johnson and the view is not too shabby at all!