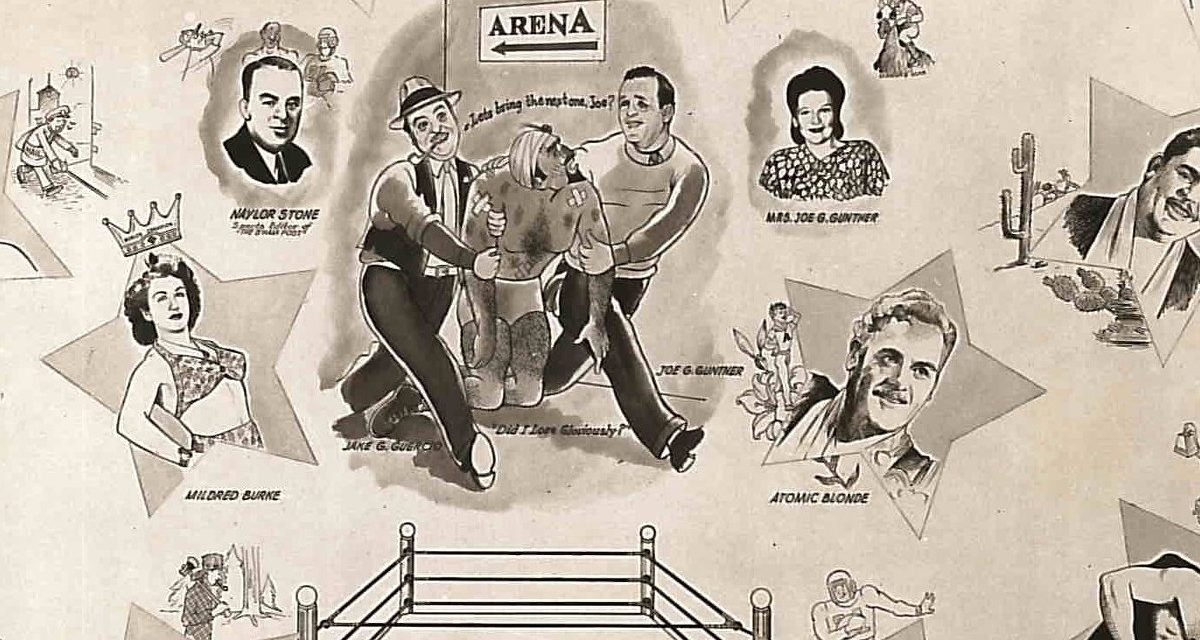 While men were off to fight battles during World War II, the wrestling business slowed down, but it didn’t stop. Birmingham, Alabama promoter Joseph “Bullet Joe” Godfrey Gunther was one of over 100 wrestlers that were conscripted or volunteered to serve their country. While he was in the service, Manda took over as promoter.

It’s quite the story.

During a wrestling tour in Hawaii in 1934, Joe first met the 30-year-old, brown-haired, blue-eyed Manda Defreese, who was originally from San Francisco, but living in Hawaii. Joe was a little heart-broken on that trip as he had lost his engraved gold watch given to his by his father. Meeting the beautiful Manda likely mended his heart, and they were married in Carson City, Nevada, on May 9, 1936. 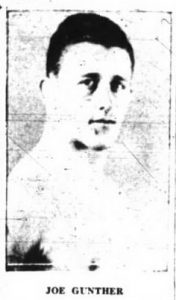 Joe joined the business side of wrestling in 1939, as an assistant to Chris Jordan, who had been a promoter since 1932. On April 1, 1940, he took over as the Birmingham, Alabama, promoter, just before Jordan passed away on April 18, 1940, from complications from heart surgery he had seven months earlier. Jordan, who also trained Joe, had already been on the outs with other local promoters in Alabama since at least 1935 as was reported in the Anniston Star newspaper after a card in 1940.

With war raging in Europe, the U.S. began preparing. Just six months and 15 days after taking over as the booker full time, Joe was conscripted to the armed forces and lined up on October 16, 1940, at the same place where he had held wrestling shows: the Birmingham Auditorium. 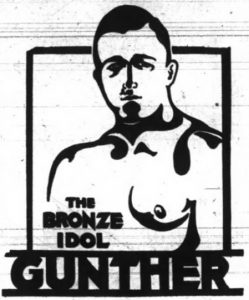 The Registrar’s Report for Joe’s enrollment noted his “obvious physical characteristics that will aid in identification” as a “right ear swollen” — or, in wrestling terms, a cauliflowered ear.

The first draft registration under the 1940 Selective Training and Service Act required all males ages 21 and 36 to register on October 16, 1940, to serve in what would ultimately be the Second World War. Other wrestlers such as Black Panther Don Blackman from Joe’s promotion were lined up behind him, ready to be measured and weighed before signing their draft cards.

After Japan attacked Pearl Harbor in Honolulu, Hawaii, on December 7, 1941, the United States joined the Second World War. For the next two years, Joe would be on weekend duty, training men for combat duty at Fort McClellan, Alabama. On January 21, 1944, he enlisted at Fort McClellan, ready to use his “torpedo slam” on the enemy. The Decatur Daily reported on his progress on February 13, 1944:

“Joe Gunther, who once packed them in when he wrestled at Martin arena here and later graduated to the promoter spot in Birmingham, now belongs to Uncle Sam. Joe, who has many followers in the Valley, has been inducted at Fort McPherson and will do his promoting against the Axis for the duration.”

Joe’s first assignment was on February 21, 1944, at Fort McPherson, in Atlanta.

Manda had taken over as the full-time promoter with fellow wrestler Nick Carter as the matchmaker for the territory on February 14, 1944. Manda was already an old hand at the business dealings with the boys, as she kept the books for the promotion and had run the shows on the weekends during the previous two years when her husband was on training duty. 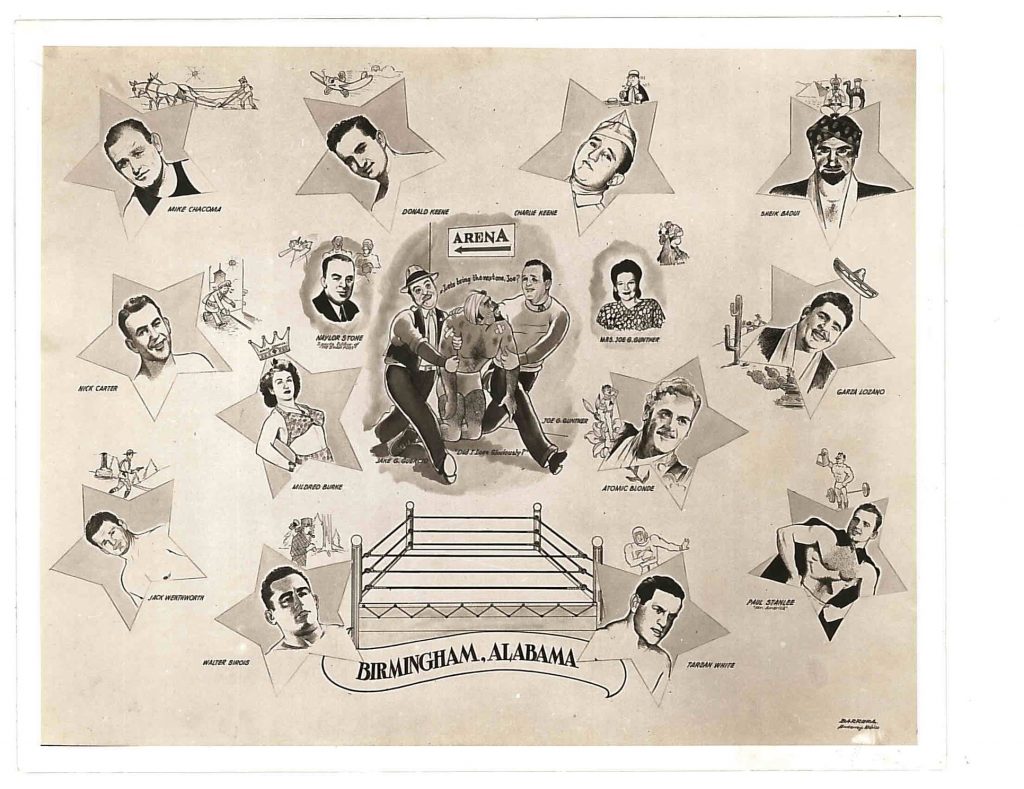 Carter would also be called to serve in the Navy. The Montgomery Advertiser reported shortly thereafter “Manda Gunther, the wife of Joe Gunther, has taken over the matchmaking job from her husband Joe Gunther, who is in the Army. Gunther is in the Field Artillery and is stationed at Fort Bragg, N.C.”

As the men were off fighting, numerous women wrestlers such as Mae Young, Elvira Snodgrass, and Nell Stewart headlined the wrestling cards. Soldiers on leave would also make sporadic appearances, as Manda noted in the Anniston Star in October 1945. “Boys in the service get first call with me every time,” Mrs. Gunther said. “That’s true, too, for Sgt. Dick Raines, Price Omar, Sammy Feedback, Chris Belkas, Nick Carter, Mike Chacoma and many other good boys now in the service work here whenever they are on furloughs.” Her husband reacted when reached by telegraph by the Anniston Star: “The work my wife is doing as a promoter simply amazes me,” he said. “She certainly has caught on quickly. There’s no need for me to hurry home. When I do, I might just let her continue.”

But, rather than discontinue the matches this week, Mrs. Joe Gunther announced Saturday night she would hold the program already scheduled for the auditorium Monday night on Wednesday night at Rickwood Park. President Paul Florence rescued Mrs. Gunther by making the park available for the matches on that night when it looked like she might have to pass up this week’s matches entirely.

So Wednesday night Rickwood Park will take to wrestling matches. The park is ideal for Summer matches, and a new crowd record is possible here for wrestling due to the larger seating capacity of Rickwood.

The Green Shadow and Joe Parelli will wrestle Jack Curtis and Sailor Watkins, and Leo Jensen meets Rod Fenton Wednesday night. Pvt. Joe Gunther, who is in the Army, will referee. He will be home on furlough.

Funds raised from the outdoor show went towards the U.S. Army and to a fund to help rebuild City Hall.

Manda would be the promoter for over 100 shows while her husband was away on duty. Every show during war-time was used as a fundraiser, with the Gen. Gorgas Post No. 1, American Legion, the Veterans of Foreign Wars, and the Disabled American Veterans, all sharing in the profits. Every Monday night, the stands would be packed with over 5,000 cheering fans. Birmingham would be considered one of the finest promotions in all the land and outdo any other event at the auditorium.

Manda would continue as a promoter of the Alabama territory, even holding off offers from rivals, such as Sunshine Morton and his heavyweights until her husband, now a Corporal, was relieved of his duty on April 3, 1946. “He can have it, and I’ll go back to my housework,” said Manda in the Anniston Star. 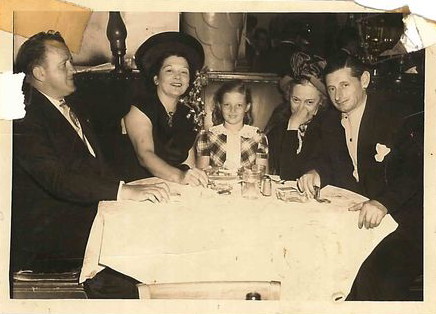 The death of Joe’s father, Joseph Gunther Sr., on May 31, 1951, sped up his decision to quit wrestling altogether. His last match was on December 20, 1951, a five-on-four handicap bout, tagging with one of his army buddies, Charley Keen with Al Getz and Farmer Brown against Baron Harben, Blackjack Dillon, Jack Kelly, Red Byrd and the Skull; it ended in a draw. Joe slowed down his promoting before selling his half of the territory to Roy Welch in January 1953. By May of 1953, Joe had sold off his other half of the territory to Clyde Walker, also of Birmingham.

Shortly thereafter, the Gunthers re-located to New Orleans, Louisiana, near where Joe was placed at Camp Livingston, and also a location where he had wrestled earlier in his career. The Gunthers purchased a share in the New Orleans territory with Ernestine and Jim Murtagh to help with their matchmaking.

In 1953, the New Orleans territory created an alliance with National Wrestling Alliance (NWA) member Cowboy Luttrall in Tampa, Florida and Paul Jones in Atlanta. It was called the Southern Wrestling Alliance. This was Joe’s first chance to join the NWA, which was formed in 1948 to unite the different wrestling territories across the United States.

From 1957 on, though, Joe worked outside the NWA, as a matchmaker with local independents such as Lambert Brown and Sammy Batson until the early 1970s.

During his wrestling career, Joe had another passion as a horse trainer. He bought his first horse, Alabama Boy, in 1944.

Having no children, Manda enjoyed entertaining at home. Family friend and fellow wrestler Freddie Knichel named his daughter Manda in her honour. Former wrestler Don Keene, who was killed on December 26, 1950, in an airplane accident in Alabama, was considered to be like a son to the Gunthers, having lived with them since before 1940.

Joe passed away at the Altoona Residence Manor on December 2, 1996, in Des Moines, Iowa. His death was due to complications from  Alzheimer’s disease. Joe was 84 years old and is buried in the Masonic Cemetery in Des Moines, Iowa. He was one of the last pioneer-era promoters at the time of his passing.

Jason Presley is the leading expert on Alabama pro wrestling through history, and his help was key in this article. He wrote a book, published by Scott Teal’s Crowbar Press, entitled The Great Wrestling Venues, Volume 3 – Alabama 1931-1935. 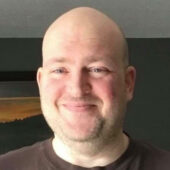