The Good Brothers and Rocky Romero: an unbreakable camaraderie 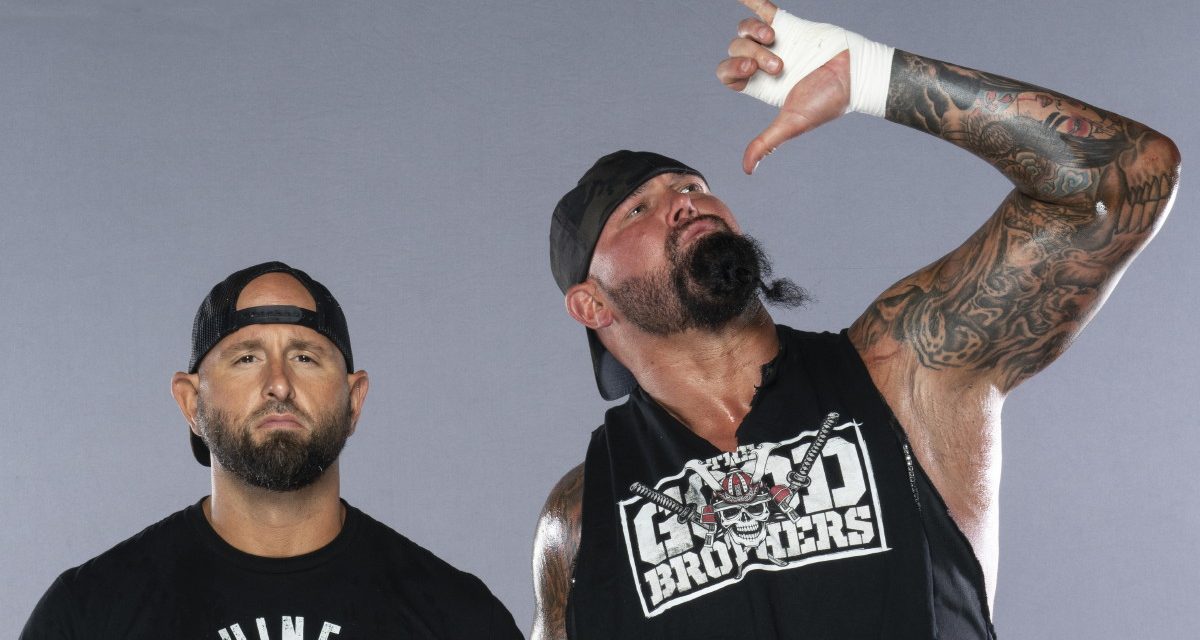 Following their sudden departure from WWE, fans started asking where 40-year-old ‘Machine Gun’ Karl Anderson (real name Chad Allegra) and 36-year old Doc Gallows (real name Drew Hankinson) would end up. But those questions were answered only a few short months later, as both of them signed with Impact Wrestling.

But changing employers didn’t affect the strong bonds The Good Brothers have with their fellow pro wrestlers. This was demonstrated during a November 2020 phone interview with SlamWrestling.net, when Impact’s Good Brothers were joined by New Japan Pro Wrestling mainstay Rocky Romero (real name John Rivera, 38). The three of them were cheerful as they spoke of their accomplishments in pro wrestling, current projects, and goals. And despite working for different companies, the three of them bonded and spoke like old friends. It was a refreshing contrast to all the stories of interpromotional bickering and hostility, especially with some companies being more cloistered than others.

Romero spoke highly of New Japan, calling it more a family than a workplace. And while he hasn’t had much in-ring activity as of late, he has been busy scouting talent and guiding the next generation of wrestlers. He considers this to be a critical role because, “without the next generation, you have nothing.”

The Good Brothers have been particularly busy in Impact. On one hand, the in-ring duo of Gallows & Anderson have made their presence known since debuting back in July at Slammiversary 2020. They set their sights on current Impact World Tag Team Champions The North (Ethan Page and Josh Alexander) and hope to defeat this duo at Turning Point 2020. If they succeed, they’ll become ‘tag team pro wrestling triple crown champions’ being among the elite few teams to have won tag team gold in Impact, WWE, and New Japan Pro Wrestling. 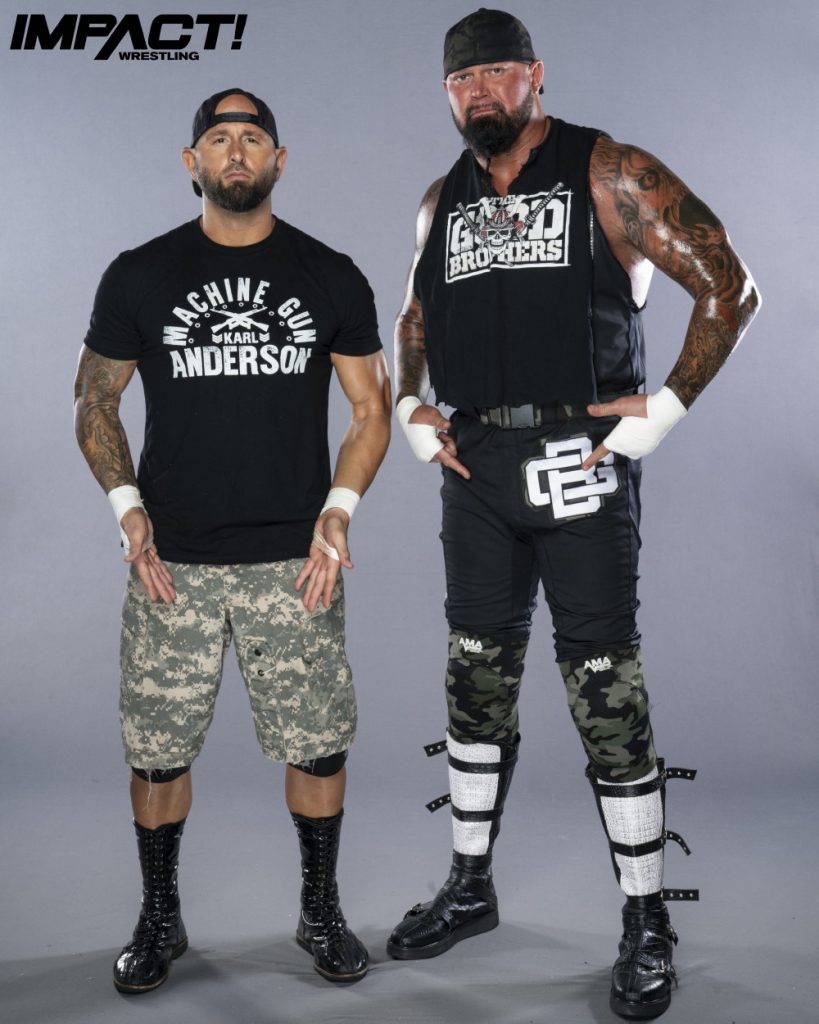 But their Impact debut wasn’t as ‘explosive’ as some might’ve expected. Many people thought that this duo would arrive and immediately become tag team champions. Instead, there has been a slow burn with them slowly making their way to a title shot. And in their opinions, this was a smarter decision by Impact’s bookers.

“A slow build has traditionally worked better in my opinion,” Gallows said. “We could’ve easily come in and won the titles, but then what? I think this story is better. It has a beginning, middle and an end. It gives the fans something to invest in and follow. It’s better to watch a story play out.”

At the same time, they have also been working on a side project called Talk’n Shop. This project appears to be an amalgamation of many different things. It includes a podcast, a whole bunch of wrestling merchandise, their own line of alcohol, and, most importantly, a secondary wrestling act. Basically, Gallows and Anderson split themselves creatively, portraying two sets of characters at the same time. In Impact, Gallows and Anderson are serious professionals. But on Talk’n Shop (or Talk’n Shop-A-Mania), their alter-egos are the opposite. It’s like those old WWE-produced Southpaw Regional Wrestling videos, but with more outlandish ideas. And Romero is along for the ride, as one of ‘The Hoots.’

To make this work, Gallows and Anderson have consciously worked to separate the two acts. Because of that, they’ve kept the humor to one while keeping their Impact gimmick as straight-laced as possible. They do this because they tried combining the two aspects together before, but it didn’t work in the way they wanted. As a result, they’ve isolated Talk’n Shop into what they call an ‘alternate universe.’ In doing so, they’ve successfully managed to keep the acts and stories separate, which in turn prevents stories and gimmicks from each one from bleeding into one another. This separation has also helped them stay creative, as they have double the work to do. Yet they’ve been handling it well thus far.

Since arriving in Impact, Gallows and Anderson have been enjoying what the company has to offer. They’ve been especially happy with the deep roster of Impact wrestlers and the fact that Impact has been and is willing to collaborate with them to promote their brand. To them, this makes Impact unique in the wrestling world. In fact, they’re so happy with these things that they even suggested extending their contract with Impact all the way to 2030.

But that doesn’t mean that they’ll be wrestling for Impact exclusively.

With Romero still signed to NJPW, the conversation shifted towards the Good Brothers possibly going back there as well. Anderson seemed especially interested in this, claiming he has unfinished singles business with Kazuchika Okada. It was interesting that his name came up, given that it was Okada’s mistreatment by TNA/Impact years ago that caused the Impact/NJPW relationship to fall apart. However, The Good Brothers want to fix this relationship in any way they can, in the hopes of creating some more interpromotional dream matches. After all, for them, working together is much more beneficial. 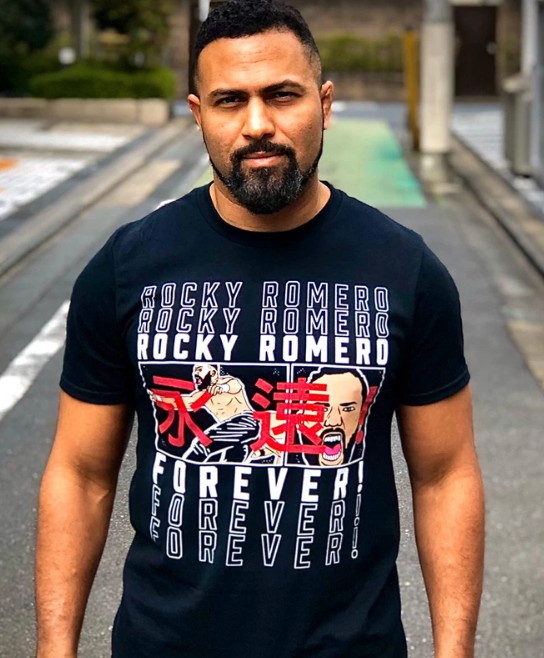 Rocky Romero models one of his t-shirts.

In the coming weeks, all three of them will be busy. Aside from their upcoming tag team title challenge, The Good Brothers will also be doing another edition of their Talk’n Shop program. The podcast version of their next show takes place the day before, on November 13 (only on FiteTV). And on November 22, the Good Brothers will be at Jimmy’s Seafood in Baltimore, MD, for a live Talk’n Shop event. Fans will be able to attend live, albeit in a social-distanced setting.

As for Romero, he’s going to be focusing more on helping the trainees in NJPW’s LA Dojo. But he hopes to be involved in NJPW’s upcoming events, possibly as a commentator. NJPW will be hosting the 2020 Super J-Cup tournament in the United States this year, and it takes place on December 12, 2020 (available on New Japan World). It will feature talent from different promotions, including NJPW’s El Phantasmo, Impact Wrestling’s Chris Bey, Ring of Honor’s Rey Horus, and freelancers TJP and ACH.