A long-time resident of Los Angeles, and a long-time wrestler in New Japan Pro Wrestling, Rocky Romero was not surprised at all about the buzz about the upcoming two “G1 Special In USA” set for Long Beach, Calif., on July 1-2. 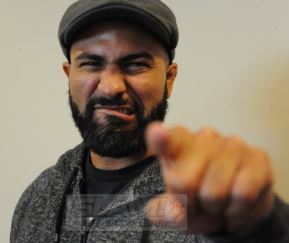 The tickets for the show at the Long Beach Convention & Entertainment Center went on sale on Saturday, April 1, and roughly 3,000 tickets were sold, ranging in ticket price from $30-$150 USD; the meet and greet tickets sold out as well.

And the shows sold out without any talent or matches having been announced.

Romero is eagerly awaiting the dates; he’s booked on both shows. The July 1st show, which will air live at 8 p.m. ET on AXS TV, with Jim Ross and Josh Barnett on commentary; on that date, it’s Roppongi Vice, Will Ospreay and The Briscoes vs. The Young Bucks, Marty Scurll, Yujiro Takahashi and Bad Luck Fale. On the July 2nd show, The Young Bucks defend the IWGP Junior Heavyweight Tag Team titles against Roppongi Vice. Another attraction on the shows is a tournament to crown the first-ever IWGP United States champion.

“I’m curious to see where the market really lies with it, because it’s still such a fresh product. But I think that we haven’t even scratched the surface yet. I’m excited for these to hopefully do really well and maybe hopefully there’s another opportunity down the line to do it again somewhere.”

While he picks up dates with Ring of Honor when he can in North America, for the most part New Japan is Romero’s bread and butter, and he wants to see it grow.

In fact, it’s his goal to “help the growth of New Japan in any way that I possibly can, whether that be as a wrestler, doing commentary, whatever it might be.”

The 34-year-old Romero is looking down the road.

“I would like to grow more as an entertainer in that kind of aspect and broaden my horizon a little more than just a wrestler, because when I’m 40-something years old, I don’t want to have to be wrestling and taking bumps and stuff like that,” he said. “I’d still like to be involved in doing other things, and I think with all my experiences I think that I could be helpful in a lot of different ways.”

During his 20-year career, Romero said that he has learned to “just dumb things down.”

“That’s something that I’ve found out in my career. I’m not as complex as I tried to be as a wrestler in ROH in 2006 or whatever,” he said. “Now it’s kind of like I’ve got a basic moveset, I keep to it. I try to go through the John Cena-like one, two, three, this is what I do. Then it gets mixed up every once in a while and then it becomes something special.”

He finds himself offering advice on matches, advice that he knew in his own youth he would have ignored.

“I find myself being the guy, when people ask me advice is like, ‘Oh, you guys did way too much.’ When I was a young guy, I was doing way too much and everybody would tell me that. Even though I did a lot compared to what I do now, that was never like my thing. Of course, wrestling goes up and down. There will be a time, like right now, when everybody’s doing a bunch, and then in eight months or a year, there will be a different trend and people will be doing way less or they’ll be doing different stuff, or whatever. It just goes all over the place.”

“All over the place” describes Romero too.

Debuting in late 1997, the 5-foot-7, 173-pound John R. Rivera, who is originally from Cuba, has made his mark as a junior-heavyweight and as a tag team wrestler. He’s wrestled abroad, including much time in Mexico, in a dizzying number of names, including El Mono Negro, Havana Brother I, the fourth version of Black Tige, Grey Shadow, Mr. Azucar, Tornado Azteca, Azteko and Dr. Pepper Man.

Like with the names, he’s been through a few tag team partners. The Havana Pitbulls/Los Cubanitos (with Ricky Reyes), No Remorse Corps (with Davey Richards and Roderick Strong), Forever Hooligans (with Alex Koslov), and his current team with Roppongi Vice (with Trent Barreta).

“Every two years, I just get a new one,” chuckled Romero, warning Barreta that his time might be up soon.

Romero considered the pluses and minuses of new partners, exploring how the team can learn each other’s tendencies and excel.

“I’d say it’s kind of like a comedy duo for an act, an actor and you’re on a TV sitcom or something, or some kind of movie, where you’re working with a partner, and he’s got strengths and you’ve got strengths, and he’s got weaknesses and you’ve got weaknesses, and you’ve got to learn to work around that and to make the team actually good,” Romero said. “You might not always see eye-to-eye on a lot of things, that’s a big part of it. It’s kind of like being in a relationship, definitely. But I think it’s been helpful for me as a performer to just go with the flow, just to completely learn to go with the flow because you can’t control it. That’s a whole other human being, you can’t control another human being. Then you’re working so tightly with them and you’re seeing them every day that you can’t be mad at each other. It really is like a marriage in a way, you know? For me, I’ve learned just to be open and try to be as accepting to other wrestler’s wrestling philosophies.”

The marriage analogy made him laugh. “I’m on my third or fourth marriage at this point, but I think I’m getting better at it every time.”