Mat Matters: We’re with you Christine! 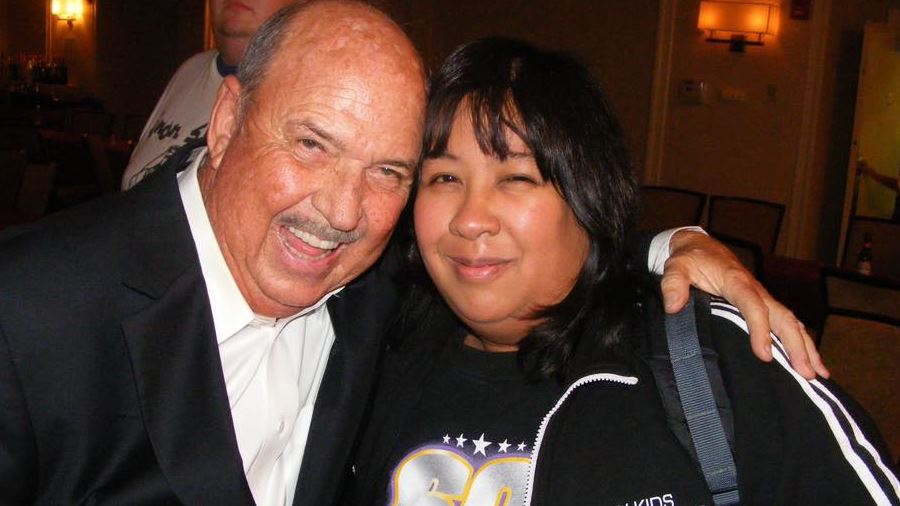 Damn you COVID-19. You have caused so much pain and suffering, and now one of our own, photographer Christine Coons, is fighting you tooth and nail at a Connecticut hospital. We’re pleased that she has seemingly taken a turn for the better, but we are still thinking of her, big time.

There have been plenty of people that have contributed to the pages of SlamWrestling over our 20+ years, and Christine was one of our regulars for many years.

She loved fan fests and would go to them to not only shoot them, but she’d get a chance to help out, whether it was manning an autograph table or picking up a wrestler at the airport. Her husband, Michael, wrote a fun story about just such an event: Some ‘Super Crazy’ memories from Legends of the Ring 10

Christine and Michael always seemed to have an endless supply of photos with celebrities — sometimes at shows, sometimes on the street or at the airport — and posted photos from events. They had wrestlers become part of their lives, like this great piece Christine wrote on Ox Baker: Mat Matters: Why Ox Baker was at my wedding and other memories.

What I love about Christine’s photos, and I teased her about this, was that they were at such a different perspective than the usual shots that I got. They were excellent photos, but because she’s height-adverse, the angle is different and unique.

And I as type this, I’m hoping and praying that she kicks out at two, and is out there shooting again. We’re sending our strength to Michael, and her son Jason, and the rest of her extended family.

I’m not the only one who feels this way, and I asked some common friends to chip in their encouraging thoughts and memories. 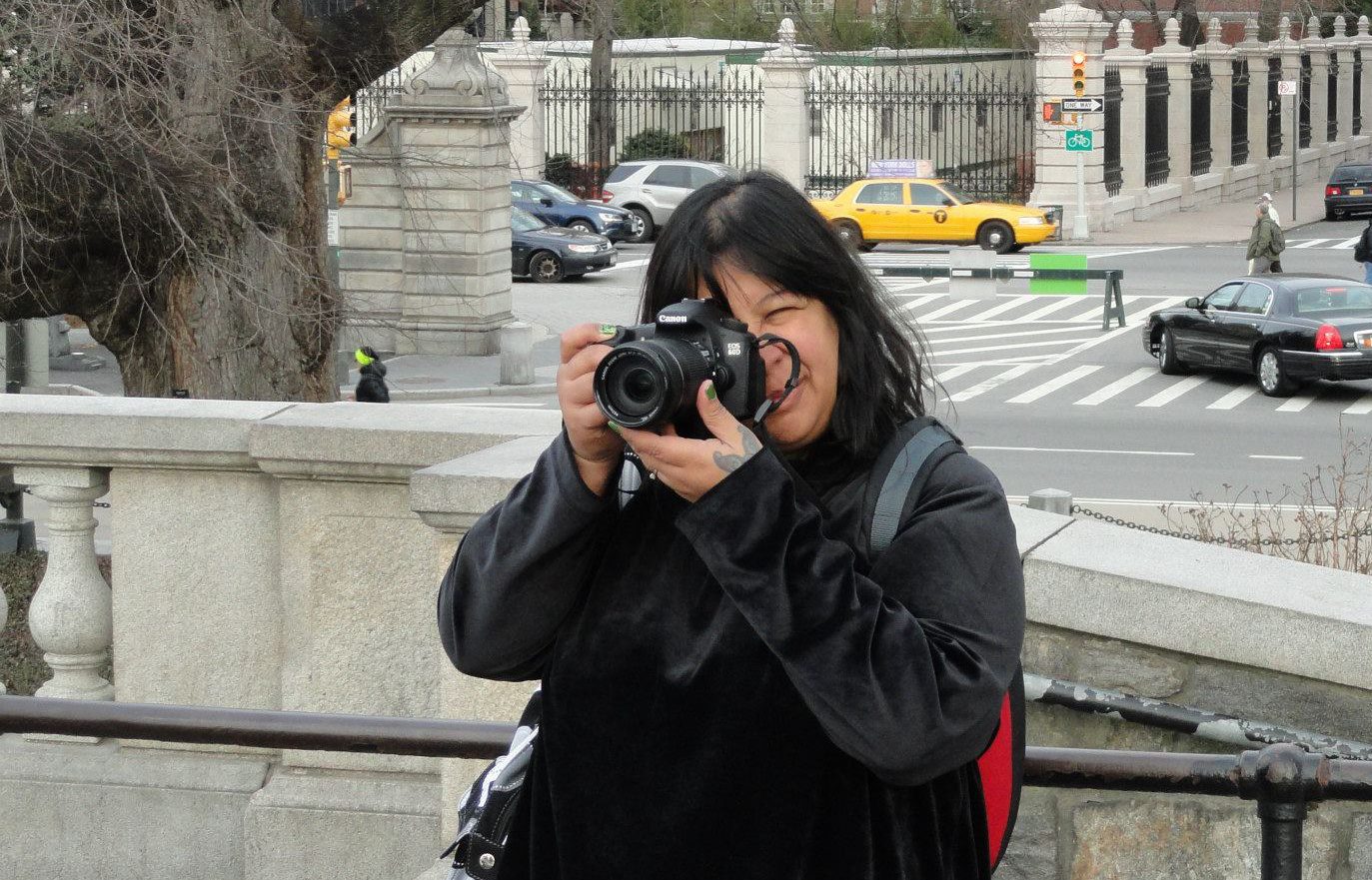 JASON CLEVETT, SlamWrestling contributor: It must have been amusing for fans when Christine and I would walk out to ringside as photographers for events. My towering 6’8″ and her diminutive stature may have made for an odd paring at first glance. The thing about Christine however is she has the ability to connect with you, easily, and not once did it ever seem weird to be hanging out together. I am so lucky to have Christine as a friend. Whether it was a day at Universal Studios California together, a Ring of Honor afterparty in a dingy bar in Detroit, running around a hotel at a convention, or the artistic dodging of each other during photography, we’ve had a lot of laughs along the way. I’ve learned a great deal about wrestling photography — both ringside and posed photos — from Christine.

While her talent behind the lens is incredible, so is her heart, spirit, and the love that she exudes for so many things. Whether Star Wars or Disney or Duran Duran or wrestling, it’s easy to get lost in just casual chatter about topics and suddenly go “hey look at the time. How did that happen?” When you’re her friend, you’re her friend and whether it’s been two weeks or 10 years she’ll treat you the same when she sees you. That’s her best quality. There are so many people rooting for her right now because Christine Coons is one of the good ones, and she’s going to make a comeback that would make the Hulkster proud.

Scott Finkelstein, photographer: If “karma’ is a real thing, it doesn’t stand a chance against the five foot-nothing, absolute sweetheart of a wrestling photographer, Christine “Ceej” Coons. Always one to share a laugh and genuinely lift the spirits, it is now she who needs some positive vibes and well wishes. I, for one, am happy to provide them. Get better soon, Ceej. I look forward to bumping booties with you against a wrestling apron again very soon!!!

Bill Apter, writer and photographer, sent in a video:

Lewis Curry, super-fan: I have know Christine for at least 10 years or so. Obviously she takes a lot of pictures of wrestlers and wrestling personalities. When I see her, you can tell she really likes what she is doing. She always has a big smile on face when taking pictures of the wrestlers. That is always a plus in any business. We need more people like Christine, positive and very real.
Christopher Annino, New England-based journalist: Whenever there is a pro wrestling event, it’s not so much what is happening in the ring, but it’s the people that come with that ring that have more meaning. Christine Coons embodies the reason why wrestling is positive. Numerous times she would talk to me at events and she wasn’t just a great photographer, but she is a great friend with a gentle soul. The atmosphere she helped create was very much underappreciated. Christine is the reason I would go to a pro wrestling event at times. Christine is pro wrestling.
George Tahinos, photographer: I first saw Christine at a show many years ago. When she came to ringside, I was thinking, Who the hell is this short girl, and why is she shooting ringside? Back in those days, there were only a handful of “real” ringside photographers. I basically stayed on the other side of the ring the whole show and once it ended, I just grabbed my bag and left. A few weeks later, there she was again, I didn’t think anything of it, and just did what I had to do. A few weeks later there she was again. In my mind, I dismissed her as one of the “mark” photographers that would show up at shows.
A few weeks later there Christine was again at a wrestling convention, walking around and taking photos. She finally came up and introduced herself. From then on, Christine would always come say hi, and she’d always be smiling. I learned that she was a pro. As well, she’d be a helping hand at conventions if the promoter needed anything. One time at the Big Event convention in New York, Christine was helping take the photos of the fans with Hulk Hogan; since it was a demanding job, I offered to help out, and we alternated every 30 minutes or so, allowing each of us to go out on the convention floor and take photos of the other convention guests instead of being stuck in the room with Hogan the whole time. Of course, without live shows, I haven’t seen Christine in a while. Get well soon Christine, so we can see that smiling face back on the convention scene!