Some ‘Super Crazy’ memories from Legends of the Ring 10

MONROE, NJ – Legends of the Ring 10 went down on Friday and Saturday, and while there was an awesome collection of talent on hand, and a fascinating shoot interview conducted live, it’ll be my time with Tajiri and Super Crazy that I will always remember.

Friday evening, my wife Christine and I were assigned to pickup Tajiri and Super Crazy at the airport. Tajiri’s flight had a half hour delay. It was a 15-hour trip from Japan and he looked tired. We asked if he wouldn’t mind waiting with us for Super Crazy’s flight from Mexico City, which was a half hour ahead of schedule. While waiting, Christine showed him the website for Legends of the Ring so he could see the guest lineup. His eyes lit up when he saw the picture of Tiger Jeet Singh. He asked about Scotty Too Hotty and Spike Dudley. 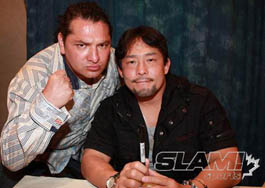 Super Crazy and Tajiri pose at Legends of the Ring 10. Photo by Christine Coons

Super Crazy’s early arrival didn’t make up for the delay at customs. When the airport staff told me it could take up to two hours to get through, we decided to get Tajiri to the hotel and return for Super Crazy. Luckily, Christine was just paying the airport parking when Super Crazy was cleared. With our two international guests in the back seat, we spent the 30-minute drive to the hotel listening to a mix of Spanish and Japanese and lots of laughter. Later that evening, Tajiri and Super Crazy were seated in a corner of the hotel restaurant, Tajiri snapping pictures with his cellphone and other convention guests constantly greeting them.

During the convention, Christine helped take photos of the fans with Tajiri. He was a lot of fun, posing with the items he autographed and rolling his eyes in every direction.

After the convention, we had the privilege of driving Super Crazy and Tajiri to Impact Championship Wrestling in Flushing, New York where they were to main event with the Amazing Red, with Mikey Whipwreck as the guest referee. The one-hour trip lasted four hours as we were greeted by New York City traffic. It was crazy. It was SUPER CRAZY. The guys were getting anxious and hungry — SUPER HUNGRY. After three hours and about five miles from the venue, we detoured to find a Subway. Crossing a busy street, Tajiri almost got hit by a car, and Super Crazy exclaimed “Where am I? Mexico City?” With plenty of time to eat fresh and digest, we made it to the venue a little after bell time. 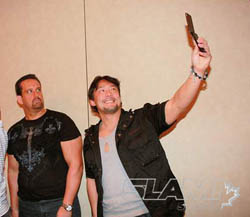 The fans at the show were treated to an action-packed main event filled with stiff kicks, high flying, a little humour, and green mist. The ride back to the hotel was much quicker, but the guys were SUPER HUNGRY again. The hotel directed us to a diner that was scheduled to close in 20 minutes. We were able to sit and order food, and we convinced the waitress to please ask the bar to open, at least for a round of beers. She managed to bring five Blue Moons to the table, for the four of us, for two of us to drink. Super Crazy tried to go into the bar himself but was denied. At one point Super Crazy asked Christine and I if we could understand anything they were saying. I admitted that Christine knew a little Spanish and Crazy slapped Tajiri’s shoulder and said “See!” as we all laughed and Christine nodded and grinned.

Though we had many good times with Tajiri and Super Crazy away from the Legends of the Ring 10 fan fest, the event itself was top-notch.

The Crowne Plaza Hotel in Monroe, New Jersey, was the host to the tenth Legends of the Ring fan fest. It started on the Friday evening with a YouShoot shoot interview conducted live with TNA President Dixie Carter, presented by Kayfabe Commentaries. Although a little late due to flight delays, Dixie was great with the fans from the time she arrived. During the shoot, the fans asked her questions, and afterward, she joined the fans at the hotel bar. I don’t think Vince McMahon would ever do that! 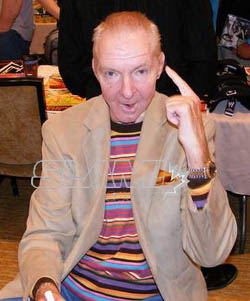 Saturday’s convention drew about 700 fans, all eager to meet the legends. Even though I was #5 in the Super Ticket line, I had to see Bobby “The Brain” Heenan first. When he arrived, I immediately got in his line at the T-Mart table to get my items signed. I purchased his book. He shared his legendary wit and humour with his fans.

There were two blocks of featured guests, and the first included Ivory, Rico, Tiger Jackson — who was Dink the Clown, Kurrgan, Man-Tar, Sean Mooney, Mike McGuirk, and the Mean Street Posse. I told Rico that fans have been requesting for years to see him at a convention. At first he was wary about doing an autograph session, now that he is a police officer. But he was very glad to see old friends and said the whole experience was very humbling. Kurrgan talked about his movie roles, saying he had fun filming both 300 and Sherlock Holmes, which had more action stunts.

Aside from the Super Ticket guests, there were many wrestlers appearing courtesy of the convention vendors.

Some of the highlights:

The second block of main guests featured Earl and Dave Hebner, Rhino, Monty Brown, Bruce Pritchard, Gerald Brisco, A-Train, PN News, and Jeff Jarrett. Brown said he is taking time off from the ring but would love to go back to TNA. A-Train admitted he doesn’t miss wrestling in the Sstates and really likes working in Japan.

Continuing to make an “impact” on the Legends of the Ring convention, TNA brought in Jeff Hardy and Shannon Moore to meet with fans. This brought more kids and families to the event which usually is attended by more mature fans.

Other guests included former 3 Count member Evan Karagias, Jimmy Rave, Jerry Lynn, Chris Hero, and Nitro Girl Fyre. The last guest to arrive was Maria Kanellis, who had flight delays. Even though the convention had officially closed for the day just minutes before her arrival, accommodations were made for the fans to still meet her.

Legends of the Convention 10 is now in the books. The overall atmosphere was fun, which I attribute to good organization. The promoters made themselves available to the fans all day. Every interaction I witnessed was of the fans thanking them for running a great event.

Michael Coons and his wife Christine are regular contributors to SLAM! Wrestling’s photo galleries. Their portfolio can also be accessed at www.studio11b.com.