Even though he is only 23 years old, Michael Elgin is an old school wrestler in the best sense of the term. “Some of the guys I look up to include Terry Gordy and Stan Hansen,” said Elgin. “It is good to know about wrestlers who laid the foundation for what we are doing today.”

The Oshawa, Ontario-based Elgin (real name Aaron Frobel) had a passion for pro wrestling at a young age. “When I was 13 I was just a fat kid who was athletic. I decided to lose weight with the idea of becoming a pro wrestler. By the time I was 14, I had lost the weight and had started training at a wrestling school.” 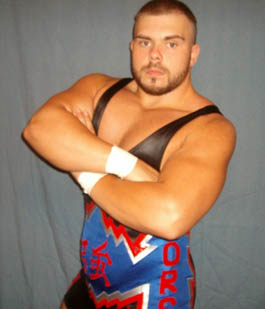 He did not have a great initial experience with wrestling training. “The first school I attended was not very good. I was lucky to find out about Rob Fuego’s school, Squared Circle Training [in Toronto]. I basically had to relearn everything. It was a great school because alumni like Gail Kim and Tyson Dux would drop by and offer their expertise.”

By the tender age of 16, Elgin was already working the indy circuit. “I have always been a big guy so was probably able to earn respect that way. At the time, there was an athletic commission governing wrestling in Ontario. They did not allow guys under the age of 18 to wrestle. I mostly worked promotions in Michigan, Ohio and Montreal. I did the odd show in Ontario as well.”

Elgin cites the pro wrestler, Sinn Bodhi (Kizarny in WWE), as an early positive influence on his career. “I can only say good things about Sinn. I met him while training at Squared Circle. We traveled to many indy shows together. He helped open a lot of doors for me.”

Having been in the business for seven years, Elgin has some definite ideas on what is necessary to improve as a wrestler. “My first year, I must have worked over a hundred matches and traveled everywhere to appear on a show. Anyone who thinks they will make it big their first year is mistaken. The only way to improve is to work matches in front of a paying crowd.”

He also offered up his opinion why business is down for the WWE and TNA. “I sometimes think the WWE and TNA are more interested in pushing guys who have a certain look or were athletes in another sport than guys who have a passion for the business. Right now, the star power isn’t there. People were behind guys like The Rock and Steve Austin because it felt like they were watching something special. Those type of guys are rare today.”

On a more local level, “Canadian Crazy Horse” Elgin feels one or two bad indy shows can hurt the overall product in a city. “I can understand why fans who attend a bad show would be reluctant to spend their money on pro wrestling again. It is too bad the few shows that suck make it more difficult for everyone.”

Elgin has had the opportunity to work against a variety of opponents across North America. “Working with 2 Cold Scorpio was a highlight in my career. I also learned a lot working a long feud with Johnny Devine. You can learn something new against almost every opponent.”

“Hot Shot” Devine complimented his frequent foe. “Elgin has come a really long way. When I first worked with him he was very green but had an open mind and was very receptive,” recalled Devine. Now three years later he is one of the best workers in Canada. If he keeps his nose clean and keeps doing what he’s been doing it won’t be long before we see him on TV for someone.”

Crowds are different from area to area, Elgin explained. “I loved working down in Alabama. They are old-school in that they cheer for the good guy and boo the bad guy. In Philadelphia, since they were exposed to ECW, the fans expect you to go out there and kill yourself.”

Despite his large size — 249 pounds on a 5-foot-11 frame — don’t expect Elgin to be working barbed wire or death matches on a consistent basis. “I don’t mind it if it is the culmination to a big feud. Sometimes, I find it is just overdone without any storyline. I have worked a couple of barbed wire matches and it wasn’t really my thing.”

To the casual wrestling fan, it would appear that Elgin has a stiff hard-hitting style. Elgin actually has the utmost respect for his opponent. “Because I am a bigger guy, my moves may seem to be more aggressive. In wrestling, you are putting your life in your opponent’s hands. I don’t really like the term stiff worker as it implies you are really hurting your opponent. You want fans to believe it but not actually do it.”

Elgin believes winning and losing is not that important in pro wrestling. “You always have to remember there are two people working a match. It doesn’t do me any good if I only try to put myself over. A good back and forth match is a hell of a lot better than just a squash match where only one guy looks good.”

He has dreams for where he would like to be in the future. “Anyone who grew up watching wrestling wants to work in the WWE. I would be happy to work TNA, go to Japan or Mexico, but ultimately, I dream about working the WWE.”