After an hour sitting at my desk, I grew restless. How many times could I write a sentence and then erase it? The reason for this frustration: my review of the Kayfabe Commentaries production Guest Booker with Mike Graham. Was I frustrated because I didn’t enjoy the DVD? Absolutely not. Mike Graham knows wrestling and is not shy to share his opinions. Was I frustrated because Sean Oliver did not ask compelling questions? Absolutely not. In fact, Oliver asked some pretty pointed questions. So what was it?

I simply could not figure out whether fans of the Guest Booker series would enjoy the DVD. Let me explain. 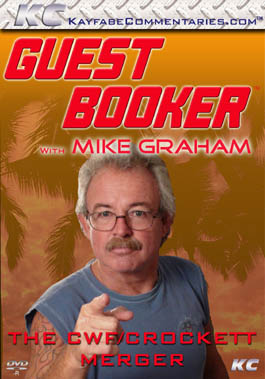 The Guest Booker series is based on the concept of taking a wrestling booker from the past and having him book a fantasy scenario. The booker generally gives some background information on himself, and them moves forward with the specifics of the scenario in front of them. This DVD was different.

Unlike previous Guest Booker DVDs, very little time was spent on the fantasy scenario. The scenario was supposed to be rebooking the merger of Jim Crockett Promotions with Championship Wrestling from Florida. Yet, the only time that was spent dealing with the scenario was when Graham sorted through the rosters at the very end of the DVD.

These complaints aside, the DVD is very interesting. Mike Graham gives a rundown on the history of his father, the legendary Eddie Graham. Eddie Graham is widely considered to be one of the greatest booking minds in wrestling history and the driving force behind Championship Wrestling from Florida.

Florida had a geographic advantage for a wrestling territory. There was only one border. Because he would not have to worry about competition on several borders, Eddie Graham chose Florida as the location where he would set up shop.

Eddie Graham was a great booker because he focused on things that were real, as opposed to forcing wrestlers to play unnatural roles. Graham would watch the way the wrestlers moved, the way they laced their boots, or the way they interacted with others. By making the characters an extension of the real personalities it made them more believable to the audience. One of the major criticisms of the current wrestling product is that wrestlers are stuck with random gimmicks and it looks forced.

Mike Graham did not aspire to be a booker growing up. Rather, the role was somewhat forced upon him by his father. Mike had been working around the office for years and finally his father increased his responsibilities. Mike credits the great booking minds around him for his education in the business. As for Eddie Graham, Mike considers his pupils to be Kevin Sullivan, Steve Keirn and Dusty Rhodes.

Graham runs through the history of WCW management and why he thought most of them were unqualified for the positions they occupied. Graham claims that Bill Watts urinated out the window at CNN Center so that he would be fired with pay. It is pretty well documented that Watts was removed from his position due to Mark Madden forwarding some racially sensitive comments to Hank Aaron that Watts had made in an interview with Wade Keller of the Pro Wrestling Torch.

Graham also tackles the issue of what makes an ineffective booker, claiming that the best bookers do not view themselves as the top act on the show. Buddy Rogers is cited as one of the worst offenders and Graham shares an entertaining story about Rogers in Florida. Sean Oliver addresses the question on most people’s mind and asks Graham if Dusty Rhodes was guilty of that booking sin.

Outside of Eddie Graham, Dusty Rhodes may be the person most responsible for the success of CWF. Ironically, he may also be the person most responsible for its downfall. Dusty Rhodes left CWF for Jim Crockett Promotions for more money. Additionally, Dusty took Lex Luger, Barry Windham, and Ron Bass from Florida. Since Dusty was CWF’s biggest star, business declined after his departure. One of the most intriguing moments of the DVD is when Oliver asks Graham if he in any way blames Dusty Rhodes for the suicide of Eddie Graham.

Before sorting through the CWF and Crockett rosters, Graham addresses his controversial role in the departure of the group that became known as the Radicalz from WCW. Graham’s account is pretty consistent with accounts provided by other figures associated with the incident; however it is entertaining to hear Graham add detail.

To close out the DVD, Graham goes through the CWF and Crockett rosters and announcers who he would cut and who he would retain. There are not many surprises on the list, except for one big name star who went on to be a World Heavyweight Champion. Since he has such a talented roster, it is more a function of Graham not wanting to deal with the personality of the wrestler he names.

My criticism of the DVD is that it does not offer a detailed approach to how the CWF-JCP merger could have been handled differently. Some may think it is silly to get caught up in the details of a fantasy scenario. Yet it is only in the details that we can capture a true sense of the great bookers’ thought processes and approach.

Much has been written about the downfall of WCW. Any wrestling historian can list the series of bad booking decisions that contributed to the decline of the promotion. Part of the reason for some of the poor booking decisions was the grind it took on the bookers to produce so many hours of content each week. As such, any critic offering an alternative to the approach WCW took should be prepared to offer very specific examples how things could have gone down.

As a shoot interview, this DVD receives high marks. Mike Graham is very direct and opinionated. Wrestling fans would enjoy the DVD. As a glimpse at his booking mind, the DVD falls a little short. If seeing an entertaining interview with colorful details about wrestling’s history is enough for someone to purchase this DVD, I would recommend it to fans.