They said he could be the next “Stone Cold” Steve Austin, but the fact of the matter is that right now, Randy Orton just isn’t cutting it as a leading WWE babyface.

As usual, there is more than just one reason why things aren’t quite going to plan. Among the issues are the timing of the babyface turn, which came too late, and there is also the fact that it wasn’t a switch that was clearly defined, since there had been physical altercations between Orton and Ted DiBiase Jr. and Cody Rhodes before Legacy imploded. 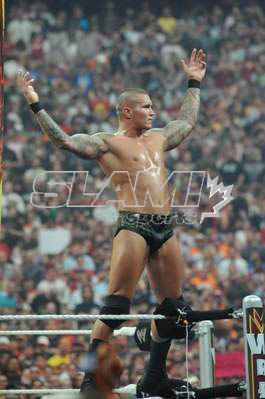 Randy Orton asks the crowd, ‘Am I a hero?’ at WrestleMania 26. Photo by Mike Mastrandrea

Furthermore, there’s the fact that the turn came against two competitors who were, and are, being booked as mid-carders, quite obviously not receiving a push at anywhere near Orton’s level. Had the turn came in a big angle with Batista, or even the well-protected Sheamus, things may have been a little different.

However, there’s also no arguing that Orton’s work inside the ring has contributed to rather subdued reactions from the audience. The fact of the matter is that he hasn’t adapted his style whatsoever to being on the other side of the tracks, so to speak.

In talking about his own career, Jake “The Snake” Roberts was fond of saying that he didn’t adapt his style after his 1987 turn, either. But the reality is that Jake’s babyface comebacks were strong, and delivered with fire, speed, and vigour. His expressions when selling injury, too, were superb, and gave the impression of real pain and peril. Orton’s — much like his former partner in Evolution, Triple H — mostly do not. Let’s not forget that Roberts also had great heels The Honky Tonk Man, “Ravishing” Rick Rude, Andre the Giant, Ted “The Million Dollar Man” DiBiase, and Rick Martel to work with — all of whom were over with the fans.

Going back to his babyface comebacks, it certainly is not the case that Orton is incapable of performing the more crowd-uplifting moves. His dropkick is absolutely stunning — in my opinion, the best in the entire business — and the RKO is the kind of quick-fire finisher that also helped Roberts (the DDT) and Austin (the Stone Cold Stunner) get over with the fans.

But the likes of the rope-assisted DDT and the inverted headlock backbreaker are moves which are best employed by a heel, because they can be used methodically to build the crowd’s fear for their favourite’s well-being. When these moves are used as regular spots by a “good guy,” it makes it appear like he’s punishing his opponent for the sake of doing so, which a babyface cannot psychologically pull off unless his heel opponent is deserving of that type of revenge. In other words, it doesn’t work on your average match on Raw.

But perhaps greater than any other problem with Orton’s current role is that his character — and, some would say, he himself — is a natural heel. In the last few years of WWE TV, his character has proven to be arrogant, bullying, devious, selfish, vicious, and heartless. Psychologically, there needs to be a reason for fans to put those memories to the back of their minds — some reason to get behind a competitor who has previously shown himself to be a sociopath. 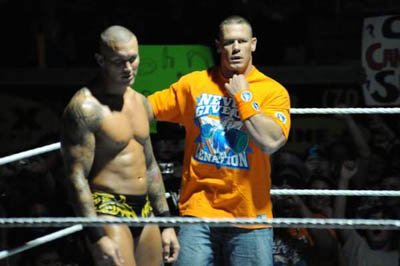 To remedy the situation, WWE’s creative team needs to establish that he at least has some redeeming qualities. Perhaps they could allow him to prove himself as a babyface ally by saving a popular star — John Cena is the obvious example — from a heel beatdown. Or maybe give an interview saying that he’s realized that he’s become his (heel) father’s son, or someone who was willing to hurt anyone in the pursuit of glory, but that now he’s going to wrestle his way to the top, rather than taking every shortcut in the book.

Whatever course Orton and WWE choose to take from here, they must do so quickly. Time is almost out for him to become the type of babyface that the company now desperately needs with Shawn Michaels retired, The Undertaker not far behind him, and Triple H out injured (and filming a movie). The momentum he had as a heel has to be redirected before it’s all gone.

Randy Orton has all the talent in the world, and has lived up to every heel standard anyone ever desired for him.

But whether he can cut it as a “blue eye,” never mind someone on the level of “Stone Cold” Steve Austin, remains to be seen.