Me and the Melby: When the news is about yourself 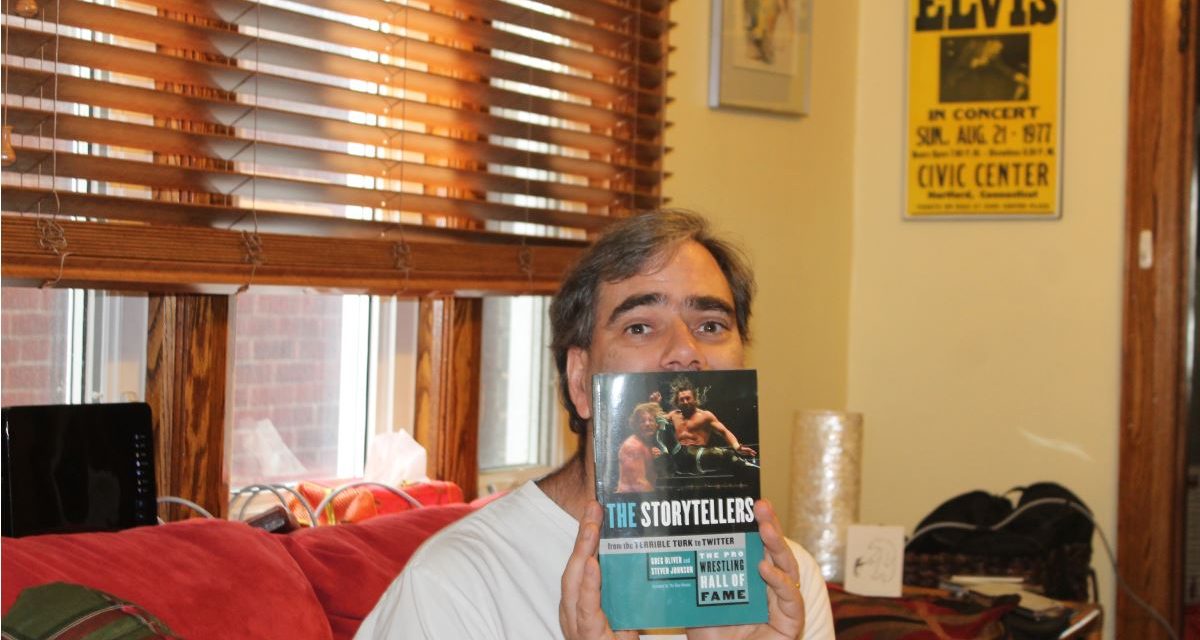 In journalism, and other areas, there’s a term called conflict of interest. At SLAM! Wrestling, we have always tried to avoid that — you can’t review books by people you know, you lay out any relationship you may have with the subject. Then along comes this news: I’m receiving the 2020 James C. Melby Historian Award from the Cauliflower Alley Club. It’s pretty hard to keep any sense of balance on that news.

For those keeping score, I was a co-recipient of the Melby Award in Waterloo, Iowa, from the George Tragos/Lou Thesz Professional Wrestling Hall of Fame at the Dan Gable Museum in Waterloo, Iowa. That was in 2008, and it was a tag-team honour, along with my frequent collaborator Steven Johnson. That was a memorable afternoon, for sure, when Steve and I got to stand at the podium and accept the honour.

This Melby from the CAC, to be presented in April, at the Gold Coast Hotel & Casino, will only have my name on it.

However, to me, it’s really a testament to the SLAM! Wrestling website and the hardworking team that has kept it going since late 1996. The plan is that a number of the regulars will be in Vegas for the festivities, and I’m looking forward to a rowdy table.

We have never shied away from the history of professional wrestling.

The Canadian Wrestling Hall of Fame was one of the first things we established on the website, and it has only grown since then.

We’ve featured countless interviews with stars from the past, and not just the wrestlers either, but also promoters, managers, referees, historians, writers, and even the people making the music.

Our obituaries are among the best, and most timely, in the business.

Some of my favourite stories on the site involved our writers venturing out of the comfort of their homes, to really get a unique perspective:

– Jason Clevett going to see Killer Kowalski in the hospital during his final days.

– Jamie Hemmings hanging out with Barry O in Las Vegas.

– Sending Andrea Kellaway to the home of Superstar Billy Graham in Phoenix for an amazing photo shoot.

– John Powell stopping The Undertaker in his tracks with a question about the recent change to his entrance music.

– Bob Kapur has had so many adventures that he deserves his own column. How about sitting at the learning tree of Dusty Wolfe? Or hanging out with old-school Houston referee Tommy Fooshee? Or seeing the beltmaster Reggie Parks at work?

– When traveling for his “real” job, Steve Johnson found a way to stop in and visit wrestlers and their families, keeping history alive. There’s a reason that he’ll be on stage at the CAC next April too, introducing the daughter of Jim Londos, who is receiving a posthumous award.

– The various writers who have gone to WrestleMania and other big events, get opportunities that can be magical. A good reporter follows up, like when Nick Tylwalk took a quote he got from Randy Orton about admiring Rey Mysterio, and walked it over to Mysterio for his thoughts.

– Jon Langmead went to the home of historian Steve Yohe and came away further in awe of his work.

The Yohe visit is a good jumping off point to the previous James C. Melby Historian Award winners, all of whom I have had plenty of interaction with during my 30+ years writing about pro wrestling: I got Mike Rodgers’ Ring Around the Northwest newsletter for years and years, and, sadly, I was talking with him at a CAC when he got a call that his father had passed; Don Luce has shared his results archive for years, and is a great guy to sit with in the bar and talk about history; I first met the Wrestling Observer‘s Dave Meltzer when I was a teenager doing my Canadian Wrestling Report, and he and the whole wrestling journalism story is a big part of The Pro Wrestling Hall of Fame: The Storytellers; Dennis Brent used to do some of the best programs ever, for World Class Championship Wrestling, WCW and WWF; George Schire is known as “The Authority” for a reason, and he’s always been there to help out … and correct errors!; Tom Burke is a legend in the wrestling community, from his newsletter to his history in fandom, to, well, everything else, and it was a real thrill to actually visit his home a few years back in Springfield, Mass. — his place was just as cool as the Naismith Basketball Hall of Fame; Vance Nevada is the wrestling name of Vern May, who was an early and frequent helper on the site, and I consider both aspects of “V” to be friends; Stephen Yohe is a great guy to sit with, as his dry, sardonic wit is great; and Scott Teal, who was the first recipient of the CAC’s award, is someone I can talk to and trust — not an easy thing in pro wrestling.

And as for Jim Melby himself, whose name is on two separate awards celebrating the journalistic and historical aspects of professional wrestling, he was a gem, as I’ve written before. He was always supportive and encouraging, quick to offer help.

The point is that no historian, no writer, lives and works in a bubble. We rely on the work of others to accomplish our goals.

I may have seven pro wrestling books with my name on them, thanks to Michael Holmes at ECW Press especially, but I know I helped out with countless others, from sharing source material, to helping with connections to photo collections. #TeamOliver is more than a hashtag.

It’s the same on SLAM! Wrestling, where, in my role as “Producer” I’m also the assignment editor, yet I don’t just assign stories. In most cases, I’m often passing along information to make it happen, from my personal files to phone numbers to email addresses for secondary quotes.

So, the Melby Award might be FOR me, but it is only a result of the work of so many others (and a patient wife and son). To all of you, and especially the readers of SLAM! Wrestling, I say thank you.

Photo at top: Greg Oliver with his latest book, The Pro Wrestling Hall of Fame: The Storytellers.