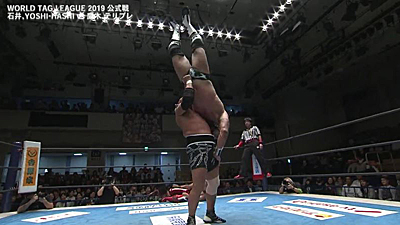 The Chaos faction team of Tomohiro Ishii and Yoshi-Hashi sit at the top of the World Tag League tournament with an undefeated record.

At Day Three emanating from Korakuen Hall, the team defeated the powerhouse Los Ingobernables team of Terrible and Shingo Takagi who surprisingly have failed to win a match thus far.

Los Ingobernables battered Ishii with a Pumping Bomber and a powerbomb yet he still kicked out bringing gasps from the crowd.

As Terrible prepared for the La Terriblina on Ishii, Yoshi-Hashi super kicked him in the back of the head. Ishii blocked a Pumping Bomber from Takagi pushing him into Yoshi-Hashi. Yoshi kicked him in the gut. Ishii hit him with a forearm to the back of the head. Yoshi hit a Code Breaker and Ishii German Suplexed Takagi out of the ring. While Yoshi kept Takagi busy outside of the ring, Ishii pinned Terrible with his brain buster inside the ring.

Jeff Cobb pinned Nakanishi with Tour of the Islands.

Kojima puts Henare away with his Lariat.

Toru Yano and Colt Cabana pull off a great win. Cabana dives on Archer from the top rope. Archer catches him. Yano punches Archer in the “lower abdomen”. Yano and Cabana roll him up for the pin.

In a battle of Bullet Club, Kenta says sorry to Chase before making him submit to the Rings of Saturn.

Finlay is pinned by Taichi giving Suzuki-gun the win.

The current standings are:

Bushi and Tetsuya Naito versus Gedo and Jay White

Gedo is blasted with an MX as Naito fights White on the floor. Bushi pins Gedo.