Strong mother: Leah Vaughan proves there is wrestling life after being a mom

Mom, wife, and recreational therapist at a local senior’s home by day; lean, mean wrestling machine by night. Might sound like the plot to a movie or television sitcom, but the truth is wrestler Leah Vaughan is living this dream in reality … and loving every moment of it. 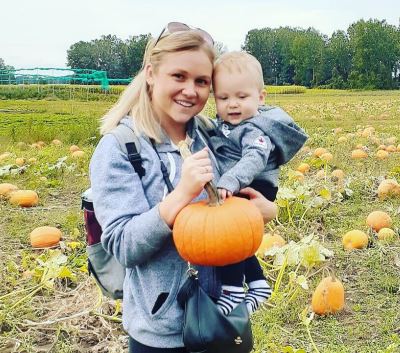 Leah Vaughan and her son.

Once performing under the name Leah Von Dutch, Vaughan knew she wanted to be a wrestler at about the age of 12, and decided to pursue this at 24. She started off as a ring announcer, acted as referee, manager, and then eventually laced up her wrestling boots with an in-ring debut in September 2011; which also happened to be the same month that Vaughan won an essay contest organized by WWE Hall of Famer Edge, scoring a scholarship at Toronto’s Squared Circle Training.

It was all uphill from there. Over the years, Vaughan has worked with a variety of promotions like SHIMMER, Shine Wrestling, Ring of Honor, Clash Wrestling, NCW Femmes Fatales, and World Wonder Ring Stardom. She was named “The Five To Watch” in 2012 by DivaDirt, and even made some appearances within the WWE, acting as a “Rosebud” for Adam Rose, and working a match against Ember Moon at an NXT taping in 2016.

With that said, Vaughan decided to step back from wrestling in late 2017.

“I knew I wanted to have family. The best part of my wrestling experience (at that point) was meeting all the little kids and babies at merchandising stands,” Vaughan noted. “I knew my biological clock was ticking pretty hard. I turned 30 and it was just like, yeah, I want a kid now.”

Vaughan’s last match took place in November 2017, and on September 21, 2018, she and her husband welcomed their baby boy into the world, naming him Dallas. While Vaughan loves all the incredible things that motherhood brings, as Dallas the Destroyer (his wrestling name, of course) is now learning to walk and explore, it was later in 2018 that she realized she wasn’t ready to give up on her own dreams inside that squared circle.

“I felt like I just wasn’t finished with wrestling yet,” Vaughan admitted.

Motivational feelings around a wrestling comeback were stirred one night in late 2018, when Leah and her husband were watching an All Elite Wrestling (AEW) conference on YouTube. After a conversation, her supportive hubby encouraged her to get back into training and give a wrestling comeback a chance.

“The entire AEW conference had me feeling pumped for a return,” Vaughan stated, adding, “if I’m going to be done wrestling, I want it to be on my terms and not because I had a child. I want my son to grow up and be like, ‘That’s pretty cool, my mom still chased her dreams, even after I was born.’ I never want him to think that my dreams stopped because I had children. ” 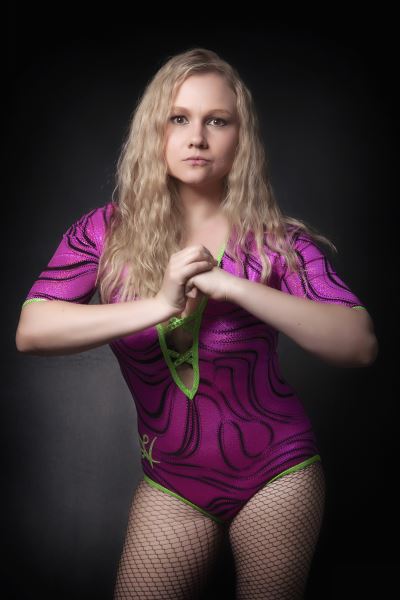 Still, perhaps Vaughan had wrestling on the brain even before that epiphany. With the huge movement in women’s wrestling in recent years, where many big things were happening with larger promotions, like the WWE and within the indy circuit, female talent were finally being given a spotlight and placed at the forefront of the card.

“It just seemed like right after I got out of wrestling to start a family, a lot of big things were happening, and there were new promotions coming out, and a lot of opportunities for females. I just remember all during my pregnancy, I was like, ‘Oh man, I really want to be a part of this!’ ”

So, for lack of a better word, Vaughan dove back into wrestling, and started training once again in December 2018. Living in London, Ontario, she attends Tyson Dux’s Wrestling Factory, and currently juggles homelife, daytime work schedules at the seniors home, motherhood, along with training, being on the road for wrestling events, and in-ring action. As per Vaughan, it’s been a challenge around finding balance, but she is certainly getting into a groove of things.

While she admits its hard to be away from Dallas for a few days at a time when a wrestling show pops up, with some matches already under her belt to date, Vaughan feels good about her comeback decision.

“I’ve had a handful of them (matches), probably five or six already, with Shine in Detroit. They are kind of like my home promotion in Detroit, and it was awesome to go back and work for them. It’s so close to home too, which is nice, I didn’t have to be away for too long. I really enjoy being in front of the crowd, and wrestling, being that character, and the fans. ”

Plus, Vaughan isn’t the only strong mother out there proving there is wrestling life after having kids. With female superstars in the WWE like Trish Stratus, Beth Phoenix, Tamina Snuka, Lacey Evans, as well as a slew of women in the indies who have jumped back into action after having their kids, Vaughan has received a ton of inspiration and support from peers and colleagues.

“Trish Stratus (is an inspiration), and Beth (Phoenix). Actually, I’m pretty close with Beth … I still talk to her every few months, send her some matches and things like that. She’s been awesome and really helpful. Mother-wise, there are a few girls on the indies scene, like Nevaeh; she has a couple of kids and she got back to the ring. It is difficult, but other moms have done it.”

Since May of this year, Vaughan has wrestled with promotions like SHIMMER, Rebelution Women’s Wrestling, and Shine. With that said, one has to wonder what does the wrestling future look like for Vaughan?

“I would say that my short- and long-term goals (for wrestling) are both the same. I’d like to be able to wrestle full time. Whether that means on the independent scene or with a big company … doesn’t really make much of a difference. I think now with a family, AEW would be the main goal.”

Leah Von Dutch has an Edge in her corner