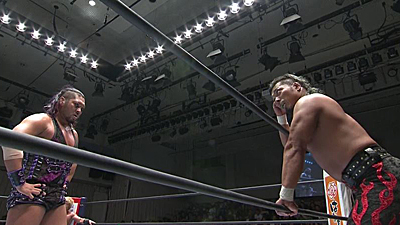 The main event featured EVIL & SANADA vs. Shingo Takagi & El Terrible. The match started off with EVIL and Takagi exchanging shoves and shoulder blocks. They chain wrestled and EVIL got Takagi in their corner so that SANADA could be tagged in and work over Takagi. Takagi fired up and cleaned house on EVIL and SANADA. El Terrible entered the match and all four men quickly went to the outside of the ring to brawl. When the match returned to the ring Takagi was working over EVIL on the mat. Terrible was tagged in to continue working over EVIL’s wrist.

EVIL was able to make a come back to tag SANADA into the match. SANADA put Terrible in the paradise lock and released it with a dropkick. Terrible did a splash onto EVIL for a near fall. EVIL and SANADA hit the Magic Killer followed by another Magic Killer. EVIL hit Everything is Evil on Terrible for the win. EVIL & SANADA beat Shingo Takagi & El Terrible.

Juice Robinson & David Finlay defeated Satoshi Kojima & Hiroyoshi Tenzan. This is the opening match and this show comes to us from Korakuen Hall in Tokyo, Japan. Tenzan started the match off with Mongolian chops to Finlay. Kojima was tagged in and continued with the Mongolian chops followed by machine gun chops to Finlay. Tenzan hit a brain buster on Finlay for a near fall. Finlay tagged in Robinson who hit a series of punches on Tenzan. Kojima hit a lariat for a near fall on Robinson. Robinson quickly came back with the pulp friction on Kojima to win the match via pinfall.

Togi Makabe & Tomoaki Honma beat Yuji Nagata & Manabu Nakanishi. Makabe and Nakanishi delivered repeated shoulder blocks to each other with neither man going down. They both tagged out. Honma and Nagata chain wrestled. Nakanishi whipped Honma into the turnbuckle. Honma came out and delivered many chops to Nakanishi, which didn’t affect him. Nakanishi and Nagata delivered hard strikes to Honma. Makabe hit the King Kong knee drop on Nakanishi for the win via pinfall.

Chase Owens & Bad Luck Fale defeated Hiroshi Tanahashi & Toa Henare. Fale jumped Tanahashi as he was standing on the ropes playing to the fans. The bell rang and Tanahashi cleaned house on Fale and Owens. The crowd erupted in a “Tanahashi” chant. Tanahashi tagged Henare and he was soon dominated by Owens and Fale in the Bullet Club’s corner. Henare eventually tagged Tanahashi who delivered a series of strikes followed by a dragon screw leg whip. Owens hit the package piledriver on Henare for the win.

Hirooki Goto & Karl Fredericks beat KENTA & Yujiro Takahashi. KENTA grounded Goto and delivered a series of punches. Goto popped back up and shoulder tackled KENTA. Fredericks and Yujiro chained wrestled for a short time. The match quickly spilled to the outside with all four men driving each other into guard rails. When the match returned to the ring KENTA and Yujiro dominated Fredericks in the Bullet Club’s corner. Fredericks made a tag to Goto who dropped KENTA with one solid forearm. Goto delivered a headbutt and GTR on KENTA to win the match.

Tomohiro Ishii & YOSHI-HASHI beat Jeff Cobb & Mikey Nicholls. Ishii and Cobb eyed either other up before the bell rang. After the bell rang, they exchanged a series of strikes and shoulder blocks. Cobb used a dropkick to take Ishii off his feet. Nicholls and YOSHI-HASHI were tagged in and the pace of the match quickened. Cobb was tagged in and he threw around YOSHI-HASHI. Ishii delivered a sliding lariat for a near fall. Ishii hit a brain buster on Nicholls for the win via pinfall.

Zack Sabre Jr. & Taichi defeated Minoru Suzuki & Lance Archer. Suzuki and Taichi had a stare down before the bell rang. Both men pulled each other’s hair and were on the ropes. The referee tried to separate them. They quickly went to the outside of the ring and Taichi used a chair to choke Suzuki. Suzuki recovered and delivered a chair shot to Taichi followed by brawling around the bleachers of Korakuen Hall. Archer delivered hard chops to Taichi. Sabre Jr. was tagged in and worked over Suzuki’s fingers so that he couldn’t use his hands. Sabre Jr. and Suzuki exchanged pin attempts and Sabre Jr. was able to hold Suzuki down for the three count.