Orton trying to be a good man, better bad guy

On WWE programming, Randy Orton plays his heel role to a tee. He’s scheming, manipulative, arrogant and disrespectful, all good qualities to possess for someone playing the promotion’s top villain.

Orton’s track record outside the ring for the past few years made it seem quite possible some of those traits also applied to his real-life persona. There was a suspension for unprofessional conduct and stories of anger issues and trashed hotel rooms. The third-generation wrestler was beginning to look like his own worst enemy. 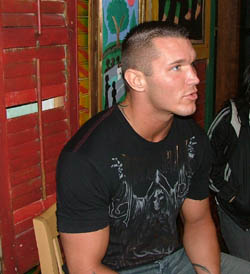 Randy Orton chats with the media days before WrestleMania 24. Photo by Nick Tylwalk

It may not be a coincidence though, that his current run as WWE Champion coincides with reports that he has settled down — and that’s in both a figurative and literal sense, as he’s been married since last September and is expecting his first child in a matter of months.

Family has a way of changing one’s priorities, and Orton is no different in that respect. Asked to name a current wrestler he admires a few days before WrestleMania 24, he skipped the usual Ric Flairs and Shawn Michaels of the world and went in a different direction.

“Right now, I look at someone like Rey Mysterio,” Orton told SLAM! Wrestling and other assorted media outlets. “He’s got two kids, a beautiful wife. He’s a real family guy. I look at Rey out of the ring, that’s how I’d like to picture myself.”

Informed of those comments, Mysterio seemed touched by the show of respect.

“Coming from a third-generation wrestler like Randy Orton, when he’s days from being a parent himself, it makes me proud,” Mysterio said. “I’m honored that he would mention that. I know Randy very well. For him to speak on a personal level like that, I’m happy that he actually picked those words and put me in that category.”

That doesn’t mean fans should expect a kinder, gentler Orton at all times. He’s keenly aware that perception is often reality, and that people who see him on television acquire preconceived notions of who he is as a person.

Orton is quick to dismiss the idea that he is exactly like his character, but he also says playing a heel can have its advantages at times.

“My character on the show is somewhat of a prick,” he said. “In real life I’m not that same guy, but there’s hints of that in me. If you catch me on a bad day walking through the airport, and you’ve got a hundred pictures you want me to sign, you might hear some four-letter word you won’t normally hear coming out of my mouth. I’ve got a little leeway because I’m a bad guy on the show, so in real life, if I don’t feel like talking to somebody, I don’t have to.” 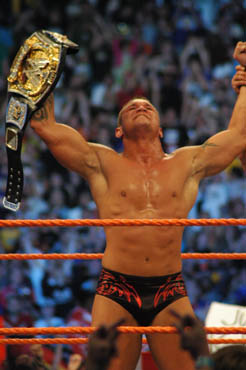 Randy Orton with his title after his victory at WrestleMania 24. Photo by Mike Mastrandrea

His self-awareness extends to his in-ring work as well. Orton admits that he’s not the flashiest worker (“I’ve got three moves,” he quipped) but feels like his ability to tell a story and take the audience on a ride allows him to get the most out of what he’s got.

It’s taken a long time for him to reach the comfort level he’s achieved, but he’s confident now that he has a handle on what it takes to reach the top of the industry. So confident, in fact, that he doesn’t mind sharing his insight with others.

According to Orton, many of his peers are missing out on chances to win over the audience because they aren’t taking full advantage of the calmer moments during their matches.

“What a lot of our guys and girls throw away is the facials, the body language,” Orton said. “They hurry up and get to the next thing before they should, when they should take a breather and realize there’s no action, so here’s a camera on me. You’ve got to take advantage of that. This is your money right here, this is where you’re going to sell that persona, that character.”

On the subject of character, Orton even had some advice for John Cena, who he’s known since his days as The Prototype in Ohio Valley Wrestling at the beginning of the decade. Asked what Cena could do to win over the portion of the crowd that always seems to boo him, Orton thought maybe a bit of change would do him good.

“I started out with [Cena] and we were good friends, and he’s always been that kind of white meat babyface,” Orton said. “I really don’t understand why they don’t like him to be honest with you. Maybe he’s too much of a good guy. Maybe if he had a little bit more of an edge, that would help.”

Orton kept his edge over Cena and Triple H at WrestleMania 24, walking out with the title belt after an opportunistic victory befitting his character. There’s little doubt that victory meant a lot to him, as he says keeping up the legacy of his grandfather and dad — who appeared in the very first WrestleMania — is one of his main goals.

As he moves on to his next challenge at Backlash, the Legend Killer seems to be wiser and more mature than he was just a few years ago. He sees himself achieving success in both his personal and professional lives, and if his new-found perspective holds up, it would be easy to see him pulling it off.

“With my baby, I want to set a good example, be a good father figure,” Orton said. “At the same time, when I come to work, I want to be all business.”