TORONTO – Stratusphere Yoga, the newest business venture of former WWE champion Trish Stratus, opened its doors for a special gala event on Thursday night, two days before it officially opens for business. SLAM! Wrestling got all suited up to be there for the special sneak peek.

A hundred or so guests were invited to tour the facility at the The Village at Vaughan Mills, a mall just north of Toronto. But on this night, Stratusphere Yoga looked and felt just like a chic nightclub rather than a yoga studio thanks to the presence of a DJ spinning beats in one corner, and a troop of waiters and waitresses floating around the room with trays of sparkling wine. 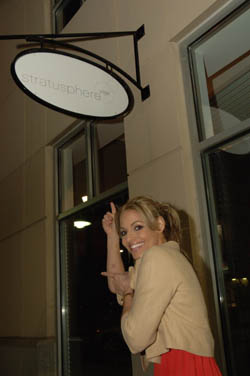 Trish Stratus at the launch of Stratusphere Yoga just north of Toronto on April 24, 2008. Photo by Mike Mastrandrea

The vibe is also helped by the modern décor of the building, highlighted by hardwood floors throughout, and textured walls and wooden furniture in soothing shades of browns and beiges. The overall effect is a calming environment that, as more than one guest expressed, feels just right for yoga.

The large classroom studios, which will house the various classes when they begin on Sunday, offered a place for the guests to mingle while enjoying a tempting selection of desserts — white chocolate being the theme of the evening.

In the main foyer, the entertainment was provided by a trio of Bohemian bongo players. Next, two of the Stratusphere trainers performed an exhibition of yoga techniques, and led the more adventurous guests in some stretching exercises — perhaps to help work off the aforementioned desserts.

Stratus herself was the ideal hostess, making her rounds to greet everyone who attended, and accepting their well-wishes with a smile and a hug. Taking centre stage only briefly, she thanked everyone who had “entered the Stratusphere,” beaming proudly. From her smile, one could tell that this event represented a significant moment in her life. And that when Stratusphere Yoga unlocks its doors for business for the first time this weekend, it will mark another.