TNA still has a major hill to climb to be on par with WWE, but the company’s latest DVD entitled Best of TNA 2007 is three hours of what could easily be more.

The one-disc DVD showcases the top seven matches (10 would have been better and a couple here are questionable) from last year and also recaps key moments and storylines as well as naming award winners for categories such as best finishing move and top tag team. 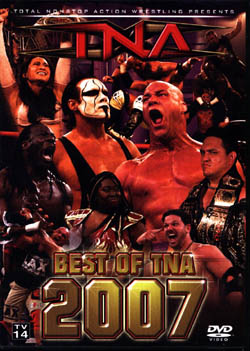 What’s very refreshing about this DVD, and with TNA in general, is that not once are the wrestlers referred to as “superstars” who “compete” in “sports entertainment.” In discussing the Knockouts, Christy Hemme notes that each woman has their own look and they’re not all from the same mold. Gee, wonder what she’s getting at?

There’s nothing wrong or bad about this DVD. In fact, it’s quite the opposite. TNA isn’t WWE, so it needs compilations like this to market itself and make it stand out from the Fed. The lucky seven number of matches are OK, but several matches on the weekly iMPACT! shows could have been included, such as Booker T’s iMPACT! debut versus Robert Roode, Awesome Kong winning the Women’s title from Gail Kim and a dynamite match between Kaz and Christian Cage. Gail winning the first-ever TNA Women’s title at Bound For Glory is also a glaring omission.

The seven matches are:

The Elevation X match was nothing short of a cluster and at times, it’s painful to watch Sting.

Some of the wrestlers give Kayfabe-style interviews and that’s OK. TNA’s voice-over dude, Barry Scott, narrates the DVD and we finally get to see his face. Has this been pertinent on other TNA releases?

This “best of” DVD also showcases the top feuds from 2007 and gives a preview of who to watch for in 2008 – even if this DVD wasn’t released until April 22nd. Maybe a tad late there for a preview of the next year when it’s already almost one-third gone.

A DVD like this has the ability to stand on its own and be a sort of reference piece for the future. A drawback to this is that pundits will always feel certain matches and moments were snubbed or shouldn’t have been included at all.

The top stars of TNA are the focal point of this disc and that’s how it should be. Most big topics from 2007 are at least touched on and it’s a solid, solid recap of 2007. Hopefully, these DVDs get bigger and better as the years go by and this one is a decent jumping-off point.

So who should pick up this DVD? No wrestling fan should be without it. Is that straight-forward enough?