Irony is a Bitch: A Review of Beer, Blood, and Cornmeal

Pro wrestling was plenty strange before San Francisco’s ultra-hip Incredibly Strange Wrestling brought horned chickens, pedophiles, and laconic referees into the ring. But it is not the gimmicks that make pro wrestling strange. It seems to me that the strangeness of pro wrestling comes from its almost complete lack of irony. 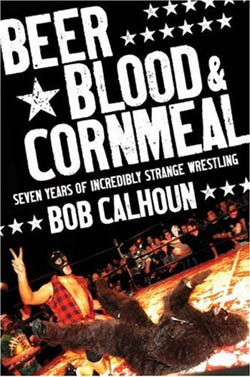 It is doubly ironic, then, that ISW tried “to be strange” by repackaging pro wrestling with irony so that the fabulous might enjoy it without risk to their cool. ISW had the knack of cool. The shows were presented as sets of satiric wrestling matches interspersed with live music. ISW was so cool that bands like NOFX, the Dickies, Fear, and bassist Mike Watt asked to be booked at their shows. Pro wrestling’s sincerity prevailed among the wrestlers, though. Irony never inspired anyone to keep taking the hard bumps night after night. ISW’s workers had that sincerely strange attraction for wrestling that keeps folks in the ring whatever the risk.

Beer, Blood, and Cornmeal: Seven Years of Incredibly Strange Wrestling is a memoir of Bob Calhoun’s time as an urban backyarder, manager, and color commentator in ISW from 1995 to 2003. It is Calhoun’s story, but he gives memorable accounts of fellow urban backyarders such as Homo Loco, Chango Loco, indy wrestlers such as Shane Dynasty/ El Gran Fangorio, and Allan Bolte, the former announcer for Roy Shire’s promotion. He shares some dope on Ron Alexander whose wrestlers provided some of the only trained talent in the ISW ring. Nothing earth-shattering on Alexander, but wrestling gossip is always welcome. Gossip about the bands who played at ISW provide for some powerful moments of schadenfreude. Fred Durst plays the diva, talks smack to the wrestlers, but then refuses to get in the ring when the time comes.

Incredibly Strange Wrestling was created by famed sensationalist Johnny Legend and promoter August Ragone, who with Brett Kieble brought the show to its main venue at San Francisco’s Paradise Lounge and Transmission Theater. The show mixed a Rockabilly, Punk, Cult Movie, Lucha aesthetic with urban backyard wrestling. As ISW grew in popularity, Audra Morse was brought in to manage the show. Morse was a successful manager, securing appearances on several alternative music tours and consistently pulling in full-houses at the Transmission and later at the Filmore. Calhoun seems to respect and fear Morse, but not much else. He portrays her as a monomaniacal carny who barks orders and rules by fiat. No surprise that in short time she cuts off Legend, Ragone, and Kieble to run ISW on her own. She is a formidable businesswoman. If she could get rid of them so easily, heaven protect the poor urban backyarder who gets on her wrong side.

The book is framed by the story of one such unlucky fellow. When the book opens, Tom Cogan and Calhoun have just met and are scrambling for their first matches in ISW. The hapless Cogan makes the error of asking Morse to pay him for his work, getting paid, then saying that he got paid in public. In the tradition of a good wrestling promoter who never pays the wrestlers if she has to, Morse declares Cogan anathema. Calhoun stays on, happy to be paid in free beer and available women. Although they barely knew each other, Calhoun keeps in touch with Cogan, bringing him up to date on ISW news. Cogan wants back in. Over the course of the book, each meeting with Cogan serves to mark Calhoun’s rise in the business. Calhoun, becoming more and more an insider, offers to act as Cogan’s go-between with Morse. In these meetings, he typically advises Cogan to be patient. The situation — meaning Morse’s temper — remains delicate. Cogan is portrayed as a pathetic supplicant in these passages. In one instance, he gasps with admiration when he realizes that Calhoun has become the de facto booker for ISW. Calhoun does not seem to be conscious that he sometimes portrays himself and ISW in culturally-delusional terms. At one point, he compares ISW’s untrained performances to the Ramones’ genius with three chords. As my mother would say, “He’s getting too big for his britches.” His portrayal of his relationship with Cogan becomes unexpectedly powerful when he finally orchestrates Cogan’s return to ISW and the tables are turned. Cogan marks out for himself and betrays Calhoun. But the betrayal seems more like a comeuppance since Calhoun has been marking out for himself and ISW all along. 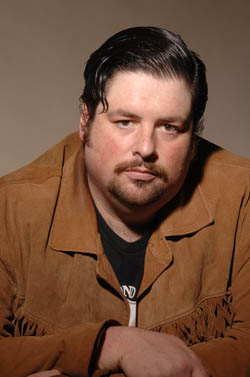 Calhoun’s style of writing is straightforward and energetic, if a bit raw. He sometimes lets his words tumble over each other in a Kerouac-like patter meant to sound “authentic.” V. Vale, of “Incredibly Strange” fame, defends any weaknesses in Calhoun’s style in his foreword:

And when a book is very entertaining (as you’ll find in this volume), one can overlook the liberal use of then-current vernacular speech, as well as stylistic quixoticisms. That is the price of reading some kind of actual “truth” committed to paper by a non-academic, non-careerist writer who has actually lived the life he is writing about. That writer is Bob Calhoun, who wrestled under the moniker of Count Dante.I will not comment on Vale’s overwrought prose, or the absurd notion that the expression of truth comes at the cost of weak style, but simply mention that this wrestler is the same Bob Calhoun who states at the end of the book that he is trying to make a career out of writing. Bob, if you are reading this, go look at the Kerouac scroll of On The Road. It has rewrites taped into it, not to mention edits in his own hand made with red ink.

Calhoun’s stronger passages, and there are many, are well-observed and sharply funny. His characterizations nicely communicate the wrestlers’ addiction to performance and risk-taking in and out of the ring. In some cases, Calhoun seems to write well by accident. He describes being “the fat kid” so poignantly that when he preens unselfconsciously in other passages, what would have been purely obnoxious becomes more nuanced on reflection. Calhoun is still uncomfortable with himself. He cannot quite abandon himself to the delicious accident of being part of something historical. I hope he abandons himself to the accident of becoming a writer. There are better books in him. I look forward to reading them.

LAURY SILVERS is a professor of the study of Religion at Skidmore College, NY. She is a recent wrestling fan and wannabe-worker. She trained and made her in-ring debut under the guidance of J.P. Black, trainer and promoter of Conquest pro wrestling. She has no plans to return to the ring except as a naive fan. Email her at [email protected].