Often times during our exercise routines we’ll think to ourselves, “Hey, if I can do this, I can show other people how to do it too.”

That thought soon dissipates, however, and before you know it, you’re back to your own workout.

Well, that is unless you’re Trish Stratus. 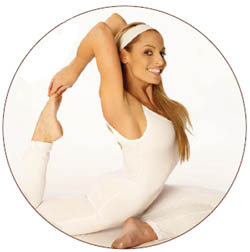 You see, the multi-time WWE Women’s Champion has ventured into a new stage of her professional life. After being a top-rated fitness model, a Diva of the ring and TV host, the Toronto-born starlet has moved into the workout regime with the opening of Stratusphere Yoga.

Located at The Village at Vaughan Mills, a mall just north of Toronto, Strausphere is a multifaceted studio which Stratus, along with business partner Janette Lynn, are officially opening this coming weekend. Offering classes ranging from hot yoga to pilates, the centre looks to make a big impact in the Greater Toronto Area.

Stratus herself has been taking yoga programs for quite some time. Just a couple years ago, Stratus (real name Patricia Stratigias) suffered a back injury while competing for WWE (either, according to Trish, from a Big Splash from Viscera or wear-and-tear from years on the road, depending which story you believe), and when the normal rehabilitation methods weren’t working, Stratus looked to yoga as an alternate healing method.

“I was doing traditional physiotherapy and nothing was helping, so I ended up walking into a yoga class one day and two months later, I dropped the physiotherapy all the way, and was feeling all the effects from there,” she recalled to SLAM! Wrestling. “I just focused on the yoga and two months later I was back in the ring, doing my thing. Not once have I had the back, knock on wood, come back and haunt me.”

Stratus’s interest in yoga continued from there. While on the road with WWE, Stratus would search out yoga centres to combat jet lag. Once her career was complete, however, the opportunity to open her own studio soon came knocking at Trish’s door.

Though she was still active in a number of projects following her WWE career, including as the host of the reality show The Second City’s Next Comedy Legend, she was able to be at home and not travel every day. It was during this period that Lynn, who had been a high school friend of Trish’s, became a yoga buddy. The rest, as they say, is history.

“We would just get together and talk about yoga. I used to say to her, ‘One day, maybe that’s something I’d like to do — open up a studio,'” she explained. “From me and Janette talking about the idea, it turned into, ‘You know what, we can do this.’ The transition point happened when I said, ‘I wish there was a yoga studio that had this,’ or, ‘I wish there was something up in the suburbs,’ then it was, ‘How about I wish can be I am going to.'”

Having a husband, Ron Fisico, who works in construction certainly helped get Stratusphere up and running in a very short amount of time. What began with a vision just a year ago is now a reality, thanks in large part to Fisico, who helped build the studio in just five months. Lynn, who had previously been in a managerial position with a pharmaceutical firm, is going to handle the managerial end of Stratusphere, while Trish will take on the marketing and advertising duties. Two business advisors have also been brought on board.

That won’t be the only role that Stratus takes on, however. Along with having a staff of instructors, Stratus herself will be leading some classes. The motivation to get her certification, Stratus admits, came partly from her own desire to learn more about yoga.

Now, Trish is ready to deliver Stratusfaction to all who take her class. “I have the opportunity to teach people and that’s great, because if they’re coming to the studio, they’re going to want to know, and you can advise them on yoga and the movements.”