G1 Climax 29 Night Seven: Kenta and Okada double up on A Block 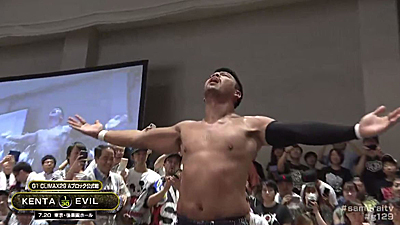 Each unbeaten with four wins in a row, Kenta and the current IWGP Heavyweight Champion Kazuchika Okada now have double the points of their nearest A Block competitors.

Kenta has put his jumbled run as Hideo Itami in NXT and 205 Live for the WWE to rest as one of the dominating forces in this year’s tournament. From Lance Archer to Kota Ibushi, Kenta has faced a wide variety of foes and beaten them all thus far. Tonight, Evil was no exception. It was a chaotic bout that went into the crowd clearing an entire section. Kenta suplexed Evil on a stack of chairs and the floor. Kenta took out Evil with the PK Kick and the Go To Sleep Finisher.

Chaos faction members Kazuchika Okada and Will Ospreay did not take it easy on each other. Who would with a place in the main event at Wrestle Kingdom on the line in the G1 tournment? No matter what Ospreay threw at the champion he would not stay down. Okada clocked Ospreay with a clothesline as he attempted Storm Breaker. The force of the blow took both men down. Okada though held onto Ospreay’s wrist. A Spinning Rainmaker and a Rainmaker snared the two points for Okada.

The Most Electrifying Wrestler today gets his first win of the tournament by…getting Fale counted out?!?!? Whatever.

Hiroshi Tanahashi puts a stop to Archer’s Blackout by pinning him with a Victory Roll.

Ibushi slips by Sanada with a Kamigoye.

The standings for A Block are:

Shota Umino and Jon Moxley beat Yota Tsuji and Juice Robinson. Umino made Tsuji submit. Robinson and Moxley brawl and brawl often. Nothing is settled between them.