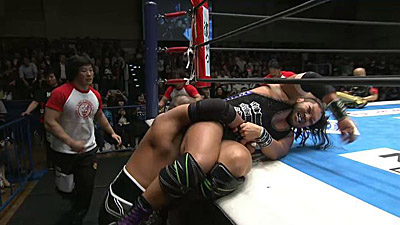 How do you know your latest tour isn’t generating the excitement it needs to? When a tournament roster reveal is almost more interesting than any of the bouts you are staging.

NJPW revealed the participants for the always exciting, always best bout producing annual Best of the Super Jr. tournament and there were a few surprises.

Canadian Riley Vigier, known as El Phantasmo, is also entered in the tournament.

The current feud between Chaos and Los Ingobernables de Japon was the theme of a double main event of sorts for night five of the Road to Dontaku tour.

It took a group of Young Lions to stop Evil and Ishii from beating the crap out of each other as took their battle into the crowd at Korakuen Hall. Ibushi taunted Naito with the IWGP Intercontinental Championship.

The rest of LIJ, Bushi and Sanada, weren’t so lucky against Chaos’ leader and IWGP Heavyweight Champion Kazuchika Okada and Yoh. Okada squeezed the life out of Bushi with a Cobra Clutch that Sergeant Slaughter would be proud of. Okada followed that with the Rainmaker Clothesline for the win.

At Wrestling Dontaku 2019 on May 4th, Tomohiro Ishii will face Evil and Kazuchika Okada will defend the IWGP Heavyweight Championship against Sanada.