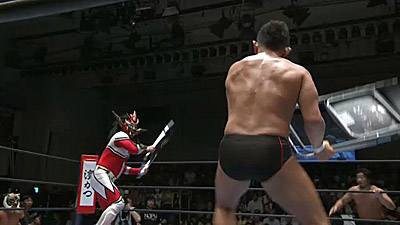 On the 30th anniversary of his career in wrestling Jyushin Thunder Liger was not backing down from one Minoru Suzuki.

On night six of the Road to Wrestling Dontaku, it was the dastardly Suzuki-gun (El Desperado, Yoshinobu Kanemaru and Minoru Suzuki) against Ryusuke Taguchi, Tiger Mask and Jyushin Thunder Liger in special match to celebrate Liger’s astounding career.

The salute to Liger was ruined when Kanemaru spit his whiskey into Tiger Mask’s face blinding him. El Desperado ripped off Tiger’s mask and Kanemaru rolled him up for the pinfall to end the match.

On the floor, Suzuki beat Liger with a steel chair. Young Lion Shota Umino came to Liger’s defence absorbing chair shot after chair shot across his back.

Suzuki took swipes at the audience and the announce team as he began to walk away satisfied that he had destroyed Liger’s moment.

“What do you think you are doing, Suzuki? You want to fight? We fight in the ring. This is sacred ground to professional wrestling. This is where we decide things in the ring,” Liger yelled at Suzuki as the crowd cheered him on.

Suzuki charged the ring with a chair in hand. Liger ducked out and grabbed a chair of his own. Liger and Suzuki battled swinging chairs at one another.

Liger dropped his chair daring Suzuki to do the same. Suzuki flung his away. Both men seized each other by the throat as officials and wrestlers poured into the ring to separate the two superstars.

“Come on, let’s do this! Fight or get out of NJPW!” Liger dared Suzuki as he headed to the locker room.