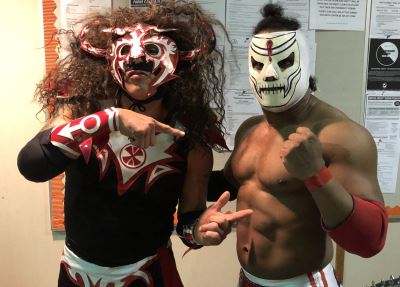 For the past month, the Great White North has been infused with a lucha libre flair as part of Canadian Wrestling Elite’s 10-year anniversary tour.

Psicosis joined CWE for the company’s journey across the provinces to team up with — and wage wars against — homegrown talent.

AJ Sanchez has been an opponent for Psicosis over the course of the tour. Sanchez, a CWE mainstay, said that when Psicosis was announced in March as a headliner for the “historic tour,” he was confident that the two would tie up in the ring.

“He’s a man I grew up watching and loved in WCW,” Sanchez said. “Back in 2012, I had the opportunity to train down in Mexico and he was the first person I saw upon my arrival. He was very hospitable back then and that hasn’t changed. Great guy.”

Psicosis, who has wrestled stateside for Extreme Championship Wrestling, WCW and WWE, said the CWE tour has been “great” so far. For part of the tour, he has tagged with various partners against MASSACRE, which consists of Martin Pain and Robin Lekime.

Lekime said he found out he would be wrestling Psicosis about a week prior to their match and was “excited” to work with the lucha libre legend. He hasn’t been in the ring with Psicosis where the crowd has not been receptive to the legend.

“The crowd always reacts really well to Psicosis,” said Lekime, who is from Belgium. “They love him.”

Psicosis began wrestling in the late-1980s and made a name for himself in Mexico, working with the illustrious Rey Mysterio Sr. Psicosis competed for Mexico’s AAA until he made the jump to ECW.

After his stint in ECW, he transitioned to World Championship Wrestling, where he became a member of the Latino World Order alongside the likes of Eddie Guerrero, Juventud Guerrera and Rey Mysterio Jr. Psicosis would later go on to form the Mexicools in WWE with Guerrera and Super Crazy.

In his time working with Psicosis, Sanchez said that “the man can still go.”

“Thirty years in the wrestling business, and he is still hitting his signature leg drop and dives to the floor,” Sanchez said. “He works hard.”

Sanchez said his experience wrestling against Psicosis has been “fantastic.”

“Crowds have been very responsive to him,” Sanchez said. “Even if by chance you don’t know who he is, when he comes out wearing his mask and gear, you just tend to want to cheer him because he looks cool.”

Sanchez’s favorite moment with Psicosis on the tour thus far has been related to the former LWO member’s demeanor.

“I’d have to say [my favorite moment has] just how easy he is to work and get along with,” Sanchez said. “He’s even set up and torn down the ring on some occasions.”

Psicosis’ appearances on the anniversary tour will continue until its last date, May 2. For more information, visit www.cwecanada.net.