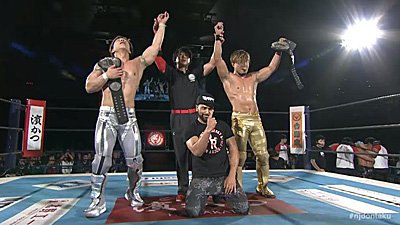 Road to Wrestling Dontaku – Aki no Kuni SENGOKU EMAKI came to us from Hiroshima, Japan. The main event between Bushi and Shingo Takagi against Sho and Yoh started with Shingo driving Sho into the ropes followed by a stiff chop. Sho was able to ground Takagi and follow up with a series of kicks.

Takagi attempted a pumping bomber but Sho was able to work over Takagi’s arm with a submission. Takagi was able to power bomb Sho for a near three count. As Takagi returned to his feet, he was holding his arm in pain, which allowed Sho to take advantage in the match.

All four men brawled in the ring and exchanged various moves. All four men were knocked down. After a few seconds, Takagi and Sho returned to their feet to exchange multiple forearms and chops. Sho attempted the shock arrow but Takagi was able to back drop Sho.

Bushi and Yoh exchanged high impact moves, which resulted in many near falls. Sho ran into the match to double team Bushi. Takiagi hit the pumping bomber followed by a lung blower from Bushi on Yoh for a near fall. Bushi delivered a low blow on Yoh for another near three count. Yoh delivered a dragon suplex on Bushi for the win.

After the match Rocky Romero sang, we are the champions by Queen.