NJPW’s Wrestling Hinokuni: Guerrillas of Destiny get violent with the Players 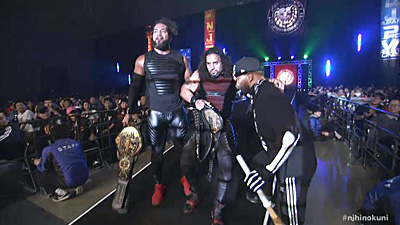 “Master Heater” Jado came out before the champs carrying his kendo stick and blasting his irritating air horn. He attacked the ring announcer smacking him in the leg with the kendo stick, just because.

The Guerrillas of Destiny jumped Yano and Makabe before the bell. Makabe was thrown out of the ring so that Loa and Tonga could double team Yano.

Yano scrambled to rip one of the turnbuckles off as Makabe double clotheslined The Guerrillas. Yano whipped Tonga into the exposed turnbuckle. Tonga crumpled to the canvass holding his back in anguish.

Living up to their nickname as The Most Violent Players, Makabe and Yano obliterated Tonga by giving him a spike piledriver on the arena floor.

Yano grabbed Loa by the hair tossing him into five rows of chairs on the floor and then burying him under some chairs. Yano dragged Loa back to the ring smashing his head into the steel post. Loa fought back inside the ring by picking up Yano and charging him into the exposed turnbuckle twice. Tonga followed up with a Stinger Splash on Yano. Yano kicked out of a double vertical suplex. Tonga ground Yano’s face into the mat with his boot. Tonga whipped Yano once again into the exposed turnbuckle.

Yano escaped being pinned by a slingshot senton from Loa by draping his leg over the bottom rope. A double head butt from the Guerrillas and a choke from Tonga almost had Yano beat. Yano hot-tagged Makabe who bulldozed the Guerrillas.

“F—k you!” yelled Makabe as he and Loa hit each other with running clotheslines again and again. The second one had Loa down to a knee.

Loa saved the titles for the Guerrillas when he dove into the ring breaking up the count after Makabe crushed Tonga with the King Kong Knee Drop.

“F—k you!” yelled Makabe again as he clotheslined Loa over the top rope and out of the ring. Jado swung at Makabe with the kendo stick. Makabe blocked it punching Jado in the jaw knocking him off the ring apron.

Tonga rolled up Makabe from behind holding his tights for the three count to retain the titles.

Will Ospreay and Dragon Lee beat Bullet Club (Hikuleo and Taiji Ishimori). Ospreay put away Hikuleo with a Robinson Special and an OsCutter.

Jay White beat Hirooki Goto with a Blade Runner. White spoke to the crowd after the three count. He called Goto an embarrassment to his family. He claims it is still the Switchblade Era. Whether it is Sanada or Okada, he is coming for the IWGP Heavyweight Championship once again.