In the cacophony noise at a weightlifting competition – the grunts, groans, clanking weightplates, and whooping crowds – it might be hard to find your inner peace. But not if you’re MMA and wrestling legend Dan Severn, who was quietly and contemplatively reading a novel despite the din all around him. But maybe that simply comes with knowing that you’re the toughest person in the place. 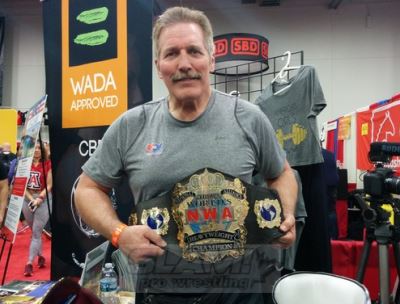 Dan Severn and the NWA World title back in March 2018. Photo by Mike Mastrandrea

That toughness is demonstrated by Severn’s decades of championship success in various martial arts disciplines, cagefighting, and both amateur and professional wrestling. His storied career will be celebrated this weekend with an induction in the George Tragos/Lou Thesz Professional Wrestling Hall of Fame. The induction ceremony – which will cap off a weekend of festivities at the National Wrestling Hall of Fame Dan Gable Museum in Waterloo, Iowa – will mark the third time Severn has been honoured by the organization, having received the Frank Gotch Award in 2002 and the George Tragos Award in 2012.

“I take a great deal of pride in what I have done,” Severn told SLAM! Wrestling earlier this year at the Arnold Classic Sports Festival. “(I worked hard) and poured my heart and soul into everything I did. In junior high school, I played football, I did track and field, and then I moved more and more into wrestling – at seventeen, as a high school senior, I was trying to make the Olympic team. I just kept reaching for opportunities as they presented themselves.”

Those opportunities led to multiple championships in amateur wrestling and mixed martial arts, including several prestigious titles in the UFC. Though many people in MMA looked down on professional wrestling at the time, Severn respected both disciplines. So much so that he would actually defy the UFC purists by wearing his NWA title on his walks to the octagon.

“It was (then NWA President Dennis Coralluzzo)’s idea to put the NWA belt on me,” Severn explained. “He said it was a throwback to the days gone by when the champion used to be a legitimate shooter. (UFC) didn’t want anything to do with professional wrestling because it wasn’t the ‘real deal’. So I told them, ‘I need to educate you on the lineage of the NWA. You have to go back a ways, but all the champions had legit ability.'”

“If you go back to the carnival days,” he elaborated, “the (wrestling) champion would be inside the ring, and the announcer would say that any man, woman, or child that could last five minutes with the champion would win $10,000. That was legit. Any poor slob that would get in the ring, the champion would put down hard and fast. So when Billy Bob went back in the crowd all bloody, battered, and bruised, the people felt it had to be legit, because look what happened to one of our own.”

Severn feels his forays into professional wrestling – which he still does on occasion – brought a legitimacy back to the industry.

What adds to his legitimacy, he proudly notes, is that he achieved everything he did without the use of chemicals or steroids.

“Lifetime chemical-free. Say that inside this room,” he said, motioning dismissively to the weightlifters on stage. “You can smell the testosterone levels in here, you can smell the steroids. You hear people cheering those freak-a-sauruses that, if they were tested, how many would be clean? You can count it on one hand and have fingers left over.”

“The sad part,” he reflected,” is that I’ve outlived five of my cage-fighting opponents and almost 30 of my professional wrestling partners, and none of them were older than me – sixty years of age. That’s because of lifestyle and lifestyle choices.”

At sixty years old, Severn is unapologetic for his old-school mentality and has no problems with speaking his mind about things that frustrate him. Though he knows he’s a bit of an anomaly in that regard, and embraces that fact.

“We live in a ‘pussy world’ right now, where if you even look at someone cross-eyed, their feelings get hurt… grow a backbone. I would not be good as the President. Most people just need a good old-fashioned ass-beating,” he laughed.

Severn, of course, is more than equipped to deliver those beatings if he wanted to. And in the ring or in the octagon, he probably would. But, in life, there’s a calming serenity that almost radiates from him.

“The Grim Reaper is the all-time champion,” he said contemplatively. “It’s all about how long you stayed in the game, and how much fun you had along the way. I’m sixty, but I don’t look like I’m sixty and I don’t act like I’m sixty. I’ve lived the life of a half dozen men already, and I plan on living the life of another half a dozen men.