Whereas GLOW’s in-ring action was, at best, passable, the current crop of women are athletes through and through, said McLane, bringing up the current WOW champion.

“You look at Santana Garrett. She’s been a gymnast, schooled as a gymnast since the age of three years old. So she’s been in competitive sports for her whole life,” he said. “That’s just the difference, of 30 years of age, she’s 30 and GLOW was like 30 years ago. So when people look at it and say, ‘Oh God, the wrestling stunk,’ I did stink, especially in comparison to today’s.” 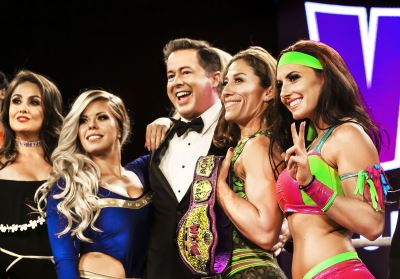 David McLane and the women of WOW.

Part of it was a change in society.

“[In] the ’80s, when you’d say to someone, ‘Are you athletic?’ Maybe they’d had some gymnastics, some, but really, they’d say, ‘Yes, I do Jane Fonda videos. I’m athletic,'” he explained. “I mean, when I cast WOW even 18 years ago, and then now, at this point, if you ask a woman, ‘Are you athletic?’ they can reel off, ‘Yes, I played soccer for the last 12 years,’ ‘I played competitive softball.’ ‘I played even in some football.'”

The U.S. legislation known as Title IX, which forced colleges to offer an equal playing field for women as for the men, made a huge difference, said McLane. In 1985, “you did not have women that had four years of grade school, high school and college sports under them. Title IX really had not taken full affect yet. We were probably just on the very tip of Title IX, where women stepped out and said, ‘Okay, I am athletic.’ But being athletic then and being an athlete today are two different things.”

Part of it was how quickly GLOW came together. “By the time I started spending money on GLOW, and I rented a gym in downtown L.A., and I was casting women, looking for women to become GLOW wrestlers, by the time I did that, had them in training, and Mando Guerrero was the initial trainer, but only lasted maybe two weeks — it’s a total misconception of what’s on TV that he was the trainer throughout the thing. Then I had to bring in someone else, and then I had to shoot the pilot. Then from the pilot, we had to go right into production. In terms of timing, the wrestling was not good, because of multiple timing issues.” His goal was to eventually to get the women of GLOW better in the ring, but the show too a comedic turn in season three, and McLane left — along with a lot of the women.

It would be wrong to dismiss McLane’s ties to pro wrestling.

“I grew up in wrestling. I was with Dick the Bruiser since I was 13, so I knew wrestling, and had been in it for over 12 years with Bruiser and Verne Gagne, Jerry Jarrett, the Crocketts in Ohio. So I grew up in it, and I knew what I wanted,” he said. “My vision was something new for women’s wrestling, new. I remember when I came up with the initial idea, I said, ‘We’ve got to have brilliant costumes, over-the-top costumes, and characters, so that people get into them.’ Hulk Hogan was the biggest thing then. To me, Hulk Hogan was a character, it wasn’t Terry Bollea wrestling.”

While he started WOW in 2000, it sort of went into a hiatus, and was restarted in 2012, and Jeanie Buss, the controlling owner and president of the Los Angeles Lakers, came on board. It all built to the AXS TV deal.

“I knew of [WOW owner] Jeanie [Buss’] passion for elevating women’s wrestling for several years, so when Mark Burnett told me what MGM Studios has planned for WOW, I decided to get involved,” AXS TV CEO Mark Cuban said in a statement when the deal was announced. “AXS TV’s long-term success inside the squared circle and broadcasting New Japan Pro Wrestling (NJPW) makes airing WOW a natural fit.”

The roster of WOW is interesting, from a rising star, like Garrett, to the well-known “Beverly Hills Babe” Amber O’Neil, to Khloe Hurtz who many know as Katie Forbes. There are “superheroes” (as they are billed) who tie into the original WOW, like Selina Majors, the Caged Heat tag team, Jungle Grrrl, and Lana Storm who is transitioning to a managerial role. Like with Lucha Underground, the wrestlers’ storylines will exist solely within the WOW universe.

“I think we have the most diverse lineup. We’re getting ready for the AXS TV video production this fall, and we’re bringing in a few more independent wrestlers,” said McLane. One of the newcomers is a tie-in to the past for the longtime fan. “One we’re bringing in, called Holidead, she’s a character, looks like the Great Kabuki from when I was a kid, when I was a teenager, with all the facepaint.

“We’re still action entertainment driven by superheroes, and we are 100 per cent committed to characters still, superheroes and villains. We don’t want to become one-dimensional. I guess what I’d also say is they all are athletes, that’s it, they’re all athletes with personalities turned up to 11.”

Or, putting it another way, “What you have with WOW is a blending of the best of GLOW, absent the Hee-Haw comedy, with the best in athleticism,” McLane said. “WOW still is cemented in characters. We don’t have, not will we have, 29 Ronda Rouseys wrestling for us.”