WATERLOO, Iowa – There aren’t too many places where you can have a former WWE champion, a former Bellator champion and a current WWE producer all in the same room, sharing stories and enjoying the different aspects of wrestling.

The city of Waterloo in the state of Iowa is probably the only one. 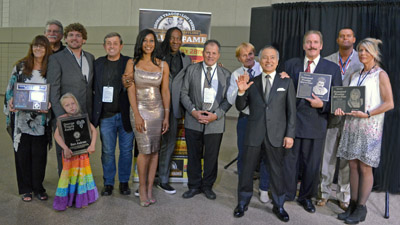 All of this year’s Hall of Fame winners. Photo By: Joyce Paustian

It was Hall of Fame weekend on Saturday, July 30, at the Five Sullivan Brothers convention center, near the Dan Gable Museum. For the 20th time, the George Tragos/Lou Thesz Hall of Fame ceremony was being held and welcomed among the best of professional wrestling, amateur wrestling and mixed martial arts.

The main event of this well-paced ceremony that lasted a little over 90 minutes was former WCW and WWE champion Booker T, receiving the Lou Thesz Championship Award, recognizing a wrestler who contributed to his community. As Father Jason Sanderson would say, it’s the Nobel Prize of professional wrestling.

Of course Booker came up to his “Can you dig it, SUCKAAAA!” theme, which people in attendance enjoyed.

“This is the last place I thought I would be recognized,” said the 53-year old, whose real name is Booker Huffman.

He talked about how he never thought of becoming a wrestler when he was young growing up in Houston. The territory was then run by Paul Boesch, who Huffman said he was like a god in the city. And there is one thing Boesch said that struck his mind:

“A kid can’t fire a gun with boxing gloves on.”

That’s part of the reason why Huffman always tried to find a way to help the youngsters, given them opportunities. Not only does he have a foundation called “Fights for Kids” but he also has a wrestling school. One of Booker’s student is WWE’s Ember Moon and he remembered telling her parents that they didn’t sell dreams there and that it would be all about her attitude and her willingness to be successful. He added that not everybody will make it to the WWE but if he can help someone becoming a better citizen, then he did his job. His wife Sharmell also mentioned that her husband was on the frontline after Hurricane Harvey hit Houston in 2017, helping his community as much as he could.

Two new inductees also made their way to the Hall of Fame this year.

The first one, Dan Severn, is a regular in Waterloo, as he’s the only two-time award winner going in the Hall of Fame. In fact, the former NWA champion won the Frank Gotch Award in 2002 and the George Tragos Award in 2012, being recognized for both his professional wrestling and mixed martial arts careers.

Severn talked about his nickname, The Beast, was given to him by the great football player Jim Brown, who did commentaries for the first six UFC PPVs.

“Brown told me, ‘I didn’t think much of you because you showed up at the press conference wearing a suit, a tie and glasses. I thought these guys were going to eat you alive. I saw a transformation like Clark Kent into Superman,'” said Severn. “So, he called me The Beast. In real life I’m a pussycat. But Dan ‘The Pussycat’ Severn doesn’t sell tickets!”

The other inductee was the late Owen Hart.

Brothers Bruce, Ross and Keith Hart, as well as his sister Diana Smith and her son Harry, better known as Davey Boy Smith Jr., were there to accept the honor. Earlier that day, they also held a panel about Owen, which fans really liked.

Bruce said that Owen would be tremendously honored. Ross said his brother wanted to become a teacher but once he really got into the wrestling business he never looked back. And Keith said he was going to keep this short because “if every Hart speaks we’ll be here all night!” — adding a little humor, as Owen would like it to be. Harry concluded by putting over the Hall of Fame as the best in the country and said that his grandfather Stu would be very proud.

Receiving the Jim Melby Award was wrestling historian and Lou Thesz expert Koji Miyamoto. A well-deserved recipient, he wrote 16 books on wrestling, including one on Rikidozan and another on Thesz. He also formed the International Wrestling Historian club. Charlie Thesz, Lou’s widow, talked about how Koji and Lou became really good friends and how Lou presented him to all the people in the business he respected. 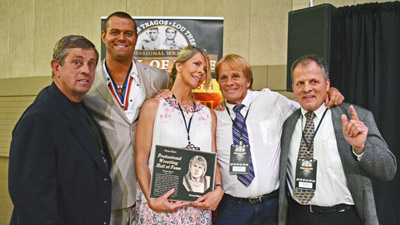 “Wrestlers are your heroes but Koji is my hero because he preserved the memories of you guys,” said Charlie.

Miyamoto was very touched by the award.

“Like every historian I had a day job so every weekend, I was around wrestling and I would be sacrificing my family,” he remembered. It is also why he was accompanied this time by his wife, son and daughter.

Another honoree was the late Bruiser Brody, receiving the Frank Gotch Award.

Stan Hansen, who teamed with Brody, but who also was a good friend of his, talked about how Brody, whose real name is Frank Goodish, was an educated guy and was a reporter in Dallas before becoming a pro wrestler. Barbara Goodish, his widow, received the award. She couldn’t believe that 30 years after his death, he’s still being awarded and remembered.

“I met a 29-year old wrestler at the CAC this year who came to me and told me he liked my book on Frank,” said Barbara. “I then realized that he wasn’t even born when Frank passed away. I’m so proud of his legacy.” 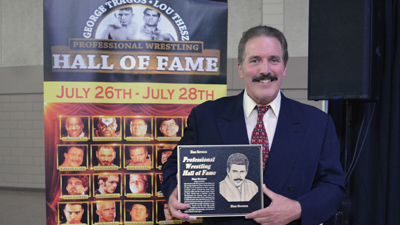 WWE Producer and five-time NWA champion Adam Pearce did a very good job as the master of ceremonies, a job that Jim Ross has done for the past few years. JR had another commitment that weekend and couldn’t attend the event. Pearce made it very clear from the beginning that he was not trying to replace JR.

“How do you step in the shoes of an Hall of Famer?” he asked.

The Hall of Fame weekend is always a fun one for people in the business and fans as well. Now a three-day event, other activities included a trivia contest, a tour of the President Hotel in Waterloo where 70 years ago, in July 1948, the National Wrestling Alliance was created, a podcast hosted by journalists Wade Keller and Bruce Mitchell, as well as an exposition on Andre the Giant by collector Chris Owens, that ended up being the talk of the weekend.

The last words of the evening went to Charlie Thesz and one more time, she spoke the truth.

“Don’t ever forget that fans are the real backbone of wrestling!”

And we just can’t argue with that.