English indy sensation Mark Haskins is genuinely in awe of his success. The new SMASH Wrestling champion, who is also set to debut for Pro Wrestling Guerrilla this fall, is humbled by the recent milestones in his 10-year career as a professional wrestler.

“I get genuinely baffled, because to me, I see myself every day,” revealed 28-year-old Haskins with a laugh in a Skype interview from Malvern, England. “I’m the biggest idiot I know yet somehow I’ve managed to convince someone in Cali (California) to essentially pay me to come out to this beautiful place and I’m like, ‘Why? How?’ I’m super excited about it!” 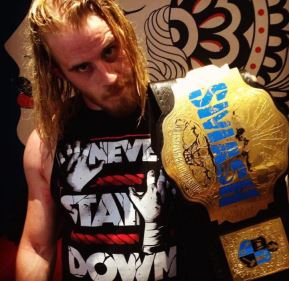 Mark Haskins with the SMASH title.

Mark Haskins with the SMASH title.

Perhaps Haskins’ bewilderment can be attributed to how hard he’s really had to work at being a professional wrestler and all things physical in general. Growing up in Faringdon, England, Haskins admits he was overweight as a teenager and he remembers often being put in goal for soccer because he was “good at getting in the way of things.”

“I was horrendous,” recalled Haskins who currently stands at 5-foot-7 inches and weighs 180 pounds. “Naturally I’m really really unathletic. I think that’s something that really frustrates me with a lot of young people or just people in general when they say, ‘Oh this is easy for you.’ It’s not!! It’s ridiculously hard for me! Everything that I’m able to do is simply through practicing over and over and spending hours of my life learning the mechanics of a move or learning how to move in a certain way and just perfecting it.”

Haskins introduction to professional wrestling came courtesy of a friend bringing over a video of World Wrestling Entertainment’s first Hell in a Cell match between Shawn Michaels and The Undertaker.

“Quite a match to start off with,” remarked Haskins. “It all kind of escalated from there. I told my parents I wanted to be a wrestler. It was a phase I never grew out of. It all just kind of progressed to the point where I am at now which is a long way from being a nine-year-old boy with pipe dreams. It’s pretty crazy!”

Haskins started his wrestling training at the tender age of 15 at the Frontier Wrestling Alliance Academy ran by Mark Sloan, who along with Haskins has had a hand in training wrestlers including Drew Galloway, Justin Gabriel and Zack Sabre Jr. The facility was located about two hours away from his home, but Haskins said he managed to badger his parents into taking him down to train once a month. When he turned 16, his training increased to weekly sessions. Haskins kept training there for the next nine years.

“The training was pretty full on,” remembered Haskins, who discovered he had a penchant for submission wrestling. “I’ve never experienced training like it elsewhere. The actual amount of wrestling we’d do in certain sessions was quite limited. It would be more about conditioning, bumping drills and things like that. I look back at this stuff we used to do and the sessions would be broken up into different circuits and stuff and you think now how much we were probably overtraining if anything. We just did cardio, cardio and more cardio. And then we would spend hours learning things and perfecting things and putting those things into practice. A lot of it as well was based around technical wrestling and high flying which has come in handy in later years!”

Haskins had his first match in 2006. He then spent a few years wrestling for various companies in England where he had the opportunity to encounter wrestlers like A.J. Styles, Christopher Daniels and Samoa Joe. In 2010, he experienced his first real culture shock when he wrestled in Japan for Dragon Gate wrestling. The next year he signed with TNA, but was given his release after just a year. Haskins suffered a concussion after coming down on his head when he slipped on the ropes during a shooting star press in a match with Austin Aries.

“It was eye-opening,” said Haskins about his short stint in TNA. “Looking back at it, I’m kind of glad that it went down the way that it did because it definitely changed my mindset in regards to how I wanted to do things wrestling-wise. I don’t think I was ready as a person to take on that responsibility of being in that company, but at the same time I’m never going to turn down an opportunity like that. I think there are things I probably could have done differently. I guess you just kind of feel like you might have been dealt a pretty crappy hand at times, but at the end of the day you are responsible for your own destiny.”

Haskins’ destiny includes his very first trip to Canada to defend his new SMASH Wrestling championship against Tarik in Pickering, Ontario, on August 21. He won the title by defeating previous champion and current NXT star Johnny Gargano. Haskins can barely contain his excitement about his trip as he revealed his grandmother was Canadian and he’s always wanted to go there, but never had the opportunity.

“I’ve never been there to the other side of the pond and seen that side of the family,” he said. “I think a few hundred years ago some of my ancestors were thieves in England and they took off to Canada! Don’t worry we have changed in our family a little bit since then!” 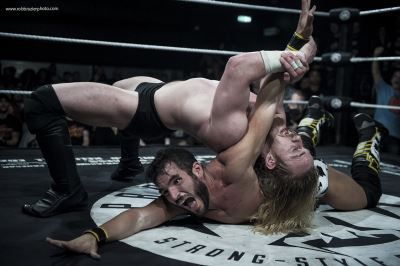 Mark Haskins puts Johnny Gargano in a bridging armbar at the Progress show on June 26, 2016. Photo by Rob Brazier Jr.

Winning the SMASH championship is beyond personal for Haskins. It was his first match back after taking a month off due to a near death experience. After wrestling for a PROGRESS Wrestling show this past May, he collapsed on the floor while out at a bar afterwards and stopped breathing. Haskins’ wife proceeded to give him CPR and he was taken to the hospital and diagnosed with severe exhaustion and dehydration.

“When I came out in London for the open challenge against Gargano, the reaction I received was the biggest cheer I’d ever received in my career,” revealed Haskins, who is grateful for all the support he received from fans and fellow wrestlers. “It was very humbling for me. I was worried going into it because I was like, ‘I hope I don’t die again!’ Then as well I’m stepping in with Gargano who is undoubtedly one of the best wrestlers of this generation.”

He added, “It was a night of mixed emotions ranging from ‘I hope I don’t pass out’ to ‘I hope I’m feeling good’ to ‘Why is he hitting me so hard?’ Then obviously when I won the championship, I didn’t quite expect the reaction that it got and that was super cool for me, having come back and after spending that last month worrying about everything else to come out and get the reaction I did. That really pushed me in the right direction.” He is now a top contender for the PROGRESS title.

“Mark embodies exactly what we look for in a champion,” stated Alan Taylor, Producer and Production Manager for SMASH Wrestling, in an email interview. “He’s someone we are confident we can bring fresh eyes to and elevate his profile, while also continuing to associate ourselves with the very best young talent in independent wrestling. When people look at our line-up of champions in the future, Haskins has the ability to be one of the biggest names in that list.”

As for the trip out to “Cali,” Haskins is in the prestigious Battle of Los Angeles (affectionately known as BOLA), taking on Cedric Alexander in a first round match. The tournament runs September 2-4 at the American Legion in Reseda.

“It’s awesome, I was looking at the lineup for it and I was blown away,” Haskins said. “I think my match is the thing I’m least looking forward to out of everything (laughs) but dont get me wrong I’m mega psyched about that it’s gonna be the first time I’ve stepped into the ring with Cedric Alexander and obviously he’s coming off the back of the [WWE] Cruiserweight Classic and from what I’ve seen so far he looks sh– hot so far with what he’s done. Look at the rest of the lineup and you have guys like Liger, Cody Rhodes, it’s stacked from top to bottom. I’m excited about being there and what’s even more exciting is no matter what match you end up in you’re gonna be in there with a calibre of guys who are ridiculously talented and that’s so appetizing for an athlete.”

When it comes to the future, Haskins says while he wouldn’t say “no” to being the WWE champion, his focus is on traveling more, listening to and collecting vinyl records and spending time with his family, preferably in the wilderness.

“I don’t want this to consume me,” reflected Haskins. “I’ve got a wife and kids and I want this to be something I love doing. It’s just something I want to try and perfect to the best of my abilities. If that manages to take me places, that’s super cool, but at the same time, looking at the bigger picture, I don’t want to be away from my children for weeks on end either.”

He added, “I’ve been really lucky! I’ve had a few good years now of just crazy experiences and matches I’ve really loved to be a part of. I don’t know it kind of feels that like every show now is a great time to be involved in wrestling. And just watching how wrestling has changed as a business and how it is moving forward is super exciting as well.”

— with files from Darren Wood