ROH War of the Worlds brings Mark Haskins back to Toronto

After being away for 18 months, Mark Haskins is returning to Toronto for the Ring of Honor War of Worlds event. Haskins has already built up a strong reputation in Canada, and his road is a good example of how one step leads to the next, and eventually, to a major company like ROH.

In 2016, Haskins began to forge his reputation in Canada with Smash Wrestling. 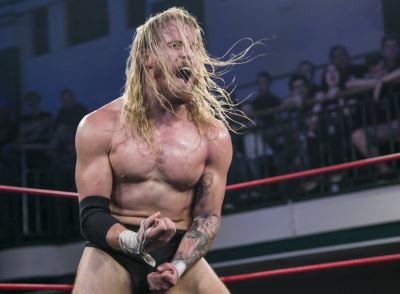 Mark Haskins, all fired up. Photo by RING OF HONOR/James Musselwhite

“At the time Smash had a working relationship with Progress Wrestling from the UK. Progress Wrestling was going to be running some shows in Canada with Smash in 2016,” said Haskins on Wednesday morning. “It was the first that I’ve heard of Smash up until that point. I’ve heard nothing but good things about Smash. The opportunity came up and I won the Smash Wrestling championship in London (England) before I’d even wrestled in Canada.”

Haskins defeated Johnny Gargano after answering an open challenge for the title.

Around the same time, PWG reached out to Haskins. The day after Haskins won the Smash championship, he was set to wrestle at the Battle of Los Angeles for PWG. “So things blew up pretty quickly for me in the space of just a few days. It was just one of those things where the right guys put my name forward and that was it. I got to do a fair bit of traveling with going to Canada and going to California, both were the first time I’ve experienced them. It was pretty bad ass!”

Haskins was contacted to be a part of the ROH UK tour. “Ring of Honor was a company that I’ve followed. I always wanted the chance to wrestle for them. When they reached out to me, I jumped at the opportunity. I did the (ROH) UK tour and then I got invited back for the next one. Over the space of a few UK tours, they saw something in me that they wanted to bring to America. So, it was last year that they asked if I would be interested in signing with the company and it was negotiated over the next few months from there,” explained Haskins.

In April, Haskins wrestled on the G1 Supercard at the famous Madison Square Garden, with stars of both ROH and New Japan Pro Wrestling. “It was pretty crazy. Walking out and there is like 20,000 fans. It was pretty surreal, pretty mental. Madison Square Garden, as a wrestling fan is one of the Mecca’s of wrestling. There has only been one company that’s ever run it, to my knowledge, until a couple of months ago. It’s something that seems like trophy or Easter egg, an accomplishment in their wrestling career or any career. It’s one of those venues that you say to anybody and nearly everybody on the planet has heard of Madison Square Garden.”

“To be in there (Madison Square Garden) with Bully Ray as well who I’ve grow up watching and getting to be in there with Flip Gordon, Lifeblood, Silas (Young), and Shane Taylor. It was an awesome experience for me,” said Haskins.

“It’s going to be my first time in Canada in about 18 months so getting to mix it up in Ring of Honor, it’s just going to be crazy. I’m super pumped to be coming back. I reached out to my uncle who’s living over here in Toronto so hopefully I’ll get to catch up with him for a coffee. Go and put my kick pads on and kick some people. I’m really looking forward to it.”

Mark Haskins and Tracy Williams will take on The Briscoes at War of the Worlds in Toronto on May 9 at Ted Reeve Arena on Main St. Tickets at ROHwrestling.com. The current tour also stops in Buffalo (Wednesday), Grand Rapids, Mich. (Sat.), and Chicago (Sun.)