Arguably considered one of the shining lights in British wrestling today, Mark Haskins has gone from strength to strength since his debut in July 2006.

Despite being only 22 years old, Haskins has had some of the standout matches in the wrestling circuit across the United Kingdom and since earlier this year has been showing of his incredible talent in one of the world’s biggest promotions — Dragon Gate. 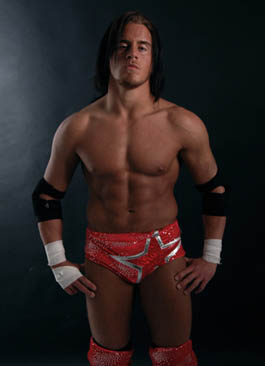 “The Star Attraction” has appeared in nearly every major promotion in the UK and has been involved in some breathtaking contests along the way.

On June 22, 2008 Haskins put in an impressive performance when he teamed up alongside Pro Wrestling NOAH regular Bison Smith against the late Mitsuharu Misawa and Kotaro Suzuki. The show was held in his hometown of Faringdon, Oxon.

“I really couldn’t believe that it was happening,” Haskins remarks. “It was just days before my 20th birthday, in front of my family, my friends and I was stood across the ring from one of the all time greats of the business.

“When I look back at it, I can’t help but feel a sense of regret, wishing I had done more in the lead up to make sure I was in the best shape of my life. I look back at it as one of my fondest memories just for the experience of being in the ring with those guys. They were all World Class athletes and what I learnt from them, has helped to benefit my career to this day.”

This past November, Haskins was chosen to appear on Dragon Gate’s first UK show in Oxford which he saw as another huge opportunity to impress.

“I wanted to do everything I could in the lead up to the event to capitalise on it,” Haskins explains. “I changed my diet and started doing more cardio so that when I was in the ring with their guys, I’d be able to keep up with their pace.

“I thought that even if any opportunities didn’t come from the event, then I’d still be able to be a part of the European debut for one of the fastest rising companies in the world today. I felt privileged to have been a part of their UK debut, let alone anything else. ”

Putting in a stunning performance against DG regular Kagetora he impressed Dragon Gate officials was offered a spot on tour with the company in Japan.

“Following the event, I was approached by company officials. They asked if I’d be interested in going to Japan. I couldn’t believe it as going to Japan was something that had always been a dream of mine. I felt really honoured and privileged that they’d asked me.

“It’s different wrestling in Japan to the UK. In Japan wrestling is still a respected sport, which is firmly rooted in the culture, whereas over in the UK, it really struggles to gain mainstream acceptance. I think the main issue is down to people’s perception of wrestling in the UK.”

Haskins first tour of Japan was hectic and very physically demanding with 27 shows show in seven weeks. On March 22nd he made a PPV appearance for the promotion at the Ryogoku Kokugikan arena, one of Japan’s most respected venues.

He teamed up with Akira Tozawa and Kagetora in a six man tag team match against Naoki Tanisaki, Makoto Hashi and fellow British wrestler Pac. Despite losing the match Haskins still remembers the feelings of stepping into the Ryogoku Kokugikan arena, which has held multiple sumo wrestling events as well as some of the top wrestling shows. 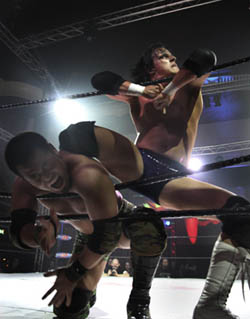 “The moment I stepped foot in to the Ryogoku arena I was in awe. The set up for the event looked incredible and by just being in the locker room I knew that the event was going to be off the charts. It was such a surreal experience to be competing in such a respected venue in front of a huge audience.”

Now Haskins comes back with Dragon Gate for a two night tour which is eagerly anticipated by UK wrestling fans all over Great Britain.

After successfully bringing Dragon Gate to these shores last year Mark Sloan, who previously promoted top UK promotion Frontier Wrestling Alliance, believes Haskins has already established himself as one of the best cruiserweights around.

“Mark is both extremely talented and very intelligent. He is so rounded, the wrestling industry is ripe for a fresh new talent that can work any style and do it with such ease and grace,” said Sloan. “I think he could work for any company that he so chooses and establish himself as a mainstay there.”

“I know he is having a great time with Dragon Gate and like with fellow British wrestler PAC he may choose to base his career there.”

On Friday 10th September, night one of the tour sees Haskins face top British wrestler Lion Kid which many UK wrestling fans believe could be the match that steals the show. 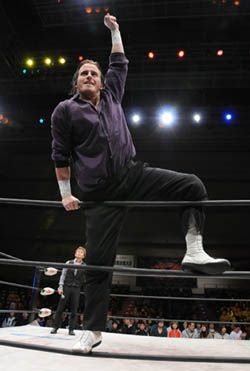 These two have battled in the past for International Pro Wrestling: UK having an incredible encounter for the Cruiserweight Championship. Few predicted that this contest would be one of the most spectacular matches of the year.

“We’ve fought one another on numerous occasions across England where each and every time we step in to the ring; the competitive nature gets taken up a notch.

“When you take in to account this being the return of Dragon Gate to the UK, I feel that we’re both going to go all out and give the fans something to remember come September 10th.”

As well as several top British wrestlers, Dragon Gate will be bringing some of their top Japanese stars. Making the trip from Japan will be CIMA, Susumu Yokosuka, Shingo and Cyber Kong.